In this latest episode of The New Stack Makers podcast,  Abby Kearns, Puppet's chief technology officer and head of R&D, and Chip Childers, Puppet chief architect, discussed what automation for infrastructure management for cloud native deployments means for Puppet and for the IT industry. Alex Williams, founder and publisher of TNS, co-hosted this interview.
Sep 15th, 2021 12:40pm by Alex Williams and B. Cameron Gain 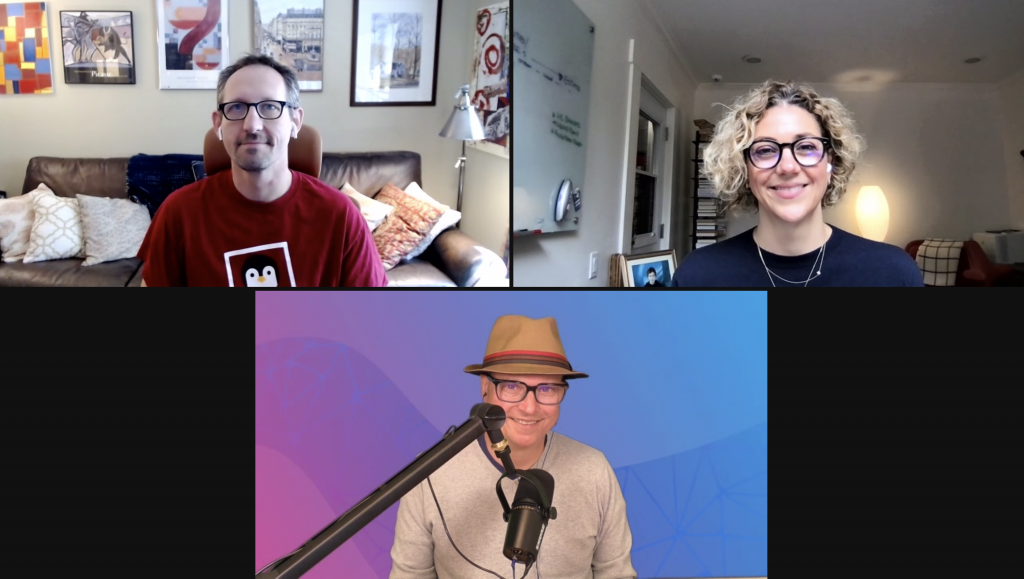 An organization that has any ambitions or hopes to scale application deployments across cloud native environments is not going to get very far without automation.

In this latest episode of The New Stack Makers podcast, Abby Kearns, Puppet‘s chief technology officer and head of research and development, and Chip Childers, Puppet chief architect, discussed what automation for infrastructure management for cloud native deployments means for Puppet and for the IT industry. Alex Williams, founder and publisher of TNS, hosted this interview.

Much attention has been paid in the trade press to cloud native, containers and Kubernetes. However, the fact remains that the number of workloads that are actually actively running in cloud native architectures is still in the early stages, Kearns said.

“It’s pretty nascent in terms of deployment, and while there has been this massive focus, there’s still this massive on-prem expectation for most enterprises, and that includes both in their colos [colocation facilities] or in private clouds,” Kearns said.

“It’s data that they don’t want to move out, for data-sovereignty reasons or requirements, or even as they’re trying to figure out how to do more with the data they have in these data lakes, at the end of the day, there’s still a growing need for those on-prem capabilities.”

Still, organizations are moving more workloads to one or more public clouds, Kearns noted. Since Puppet has devoted years to automating on-premises infrastructure management, applying this know-how to cloud environments has created opportunities for the company.

“We want to build on that success of on-prem and start to extend that into the cloud, and figure out how to bring that automation need that does exist in the cloud to those cloud native workloads,” Kearns said.  “And so that’s the journey we’ve been on here, over the last year and a half. We’ve been in the process of rebuilding, or actually moving a lot of those core automation capabilities to a new Kubernetes-based platform.”

The push to shift computing resources to cloud native environments also means more complexity. The capability of helping to manage this complexity is what largely drew Childers to Puppet, who recently joined Puppet from the Cloud Foundry Foundation where he was a longtime executive director (Kearns also was at Cloud Foundry, serving as executive director until 2020).

“The complexity of information technology exponentially rose because the business demand for more technology delivered more quickly and increased, as people started thinking about tech and software as being strategically good strategic goals versus simply being a cost center,” Childers said.

“It also rapidly increased as delivery models, cloud-based models, cloud native architectures, containerization and all of those things started to really take off.”

Puppet has risen to the occasion of helping to manage infrastructure targets as complexity has increased, Childers said. “Puppet has amazing experience in that it has an amazing well of intellectual property and background and experience. Finding a way to help bring all of that heritage to what is, frankly, an incredibly difficult-to-navigate space right now for operators.”

BC Gain’s obsession with computers began when he hacked a Space Invaders console to play all day for 25 cents at the local video arcade in the early 1980s. He then started writing code for very elementary games on the...
Read more from B. Cameron Gain
SHARE THIS STORY
RELATED STORIES
Cloud Lessons to Help Developers Improve ESG Impact Unleashing Git for the Game Development Industry Enriching Dev Experience with Speedy Continuous Integration PurpleUrchin: GitHub Actions Hijacked for Crypto Mining Why You Can’t Afford to Miss Data Decisions
Cloud Foundry and Puppet are sponsors of The New Stack.
TNS owner Insight Partners is an investor in: The New Stack.
SHARE THIS STORY
RELATED STORIES
Why You Can’t Afford to Miss Data Decisions Does the GitOps Emperor Have No Clothes? Terraform Cloud Now Offers Less Code — and No Code — Options The Missing Part of GitHub Actions Workflows: Monitoring The Future Stack of Code Review
THE NEW STACK UPDATE A newsletter digest of the week’s most important stories & analyses.
The New stack does not sell your information or share it with unaffiliated third parties. By continuing, you agree to our Terms of Use and Privacy Policy.