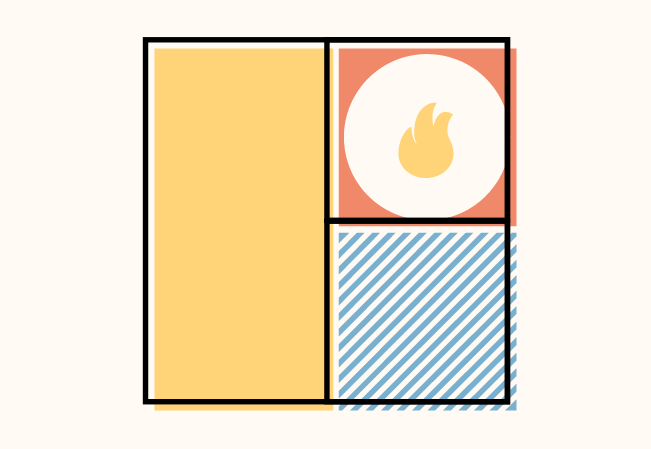 While containers provide the base for the enterprises to move to a DevOps-style software development workflow, enterprises are still wary of the security implications around the emerging technology. At the Container Camp UK this September, Red Hat Chief Technologist Chris Van Tuin offered some tips in maintaining continuous security right alongside continuous development and integration.

According to the ClusterHQ State of Containers Usage survey released this June, the biggest drivers of container adoption are the increase in developer efficiency — at 39 percent of respondents — and how containers support microservices — at 36 percent.

Over the last two years, most companies have been at least considering using some sort of container technology to leverage these benefits. But, until recently, something has been holding back enterprises from adopting containers for the production environment: security.

As with most things enterprise, it’s all about security. But while last year 61 percent cited security of containers as their main uncertainty, a mere 11 percent repeated this concern this year. So what happened to spark such a dramatic shift for DevOps to go for containers? Does security still matter in deciding which technologies to adopt?

In a recent survey, TechValidate and Red Hat found these six main security risks enterprises are still worrying over, which Van Tuin spoke about:

How do these security risks fit in with containers? Well, of course, they all involve the human element just like containers do, but Van Tuin outlined five main container-related security risks:

Information security expert Lenny Zeltser echoed the threat of poisoned images in his recent post on the need for vulnerability management specifically around security patches. He wrote about how traditionally security patches are installed into a system independent of the application. Since containers integrate the app tightly with dependencies, the container’s image is patched as part of the app deployment process.

He calls this “container sprawl” when you can run multiple instances of applications, which is great for DevOps, but it indirectly leads to Docker images existing at varying security patch levels.

The usual plan of defense with VMs is to run a vulnerability scanner, but this doesn’t work in a container approach.

“What a container-friendly approach should entail is still unclear. However, it promises the advantage of requiring fewer updates, bringing dev and ops closer together and defining a clear set of software components that need to be patched or otherwise locked down,” Zeltser wrote.

What is great about the recently more rapid adoption of containers in the ops, infosec, and QA and security auditors space, it means that there are finally more hands involved in containers so that means more people are involved in identifying and filling these security holes.

While much of these security risks apply to all container providers, there’s no doubt that the ecosystem is dominated by one player, Docker at 90 percent.

But, as Adrian Mouat wrote in his O’Reilly report on the topic, “While you certainly need to be aware of issues related to using containers safely, containers, if used properly, can provide a more secure and efficient system than using virtual machines (VMs) or bare metal alone.”

Similarly, while Zeltser has written a lot about the potential security risks of Docker and other containers, he argues that the operational benefits that we already touched on and other security benefits can outweigh these risks. 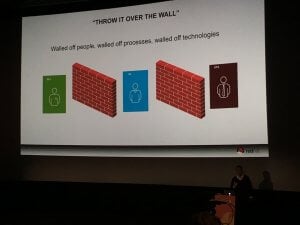 What’s important is knowing the potential security risks of Docker, we are able to learn the tools and techniques to overcome it.

Containers make it easier to segregate applications that would traditionally run directly on the same host. For instance, an application running in one container only has access to the ports and files explicitly exposed by another container.

Because of this, containers make it easier to control what sort of data and software components are installed. And this flexibility and rapid releasing of updates and independent pieces of the code puzzle means allows for much more frequent security patches alongside the application updates.

In his talk, Van Tuin added some specific ways to overcome some of the typical security risks that come with Docker.

For one thing, since humans are often the biggest security risk to anything really, you can start as a company by requiring minimum password lengths or enforce systems like the individual identity keys like YubiKeys given out at last year’s Dockercon EU.

Another of the main ways Van Tuin suggested to overcome this security risks is through a series of tools like OpenSCAP that assesses, measures and enforces security baselines. No matter what type of software you’re using, it’s important to automate a lot of the scanning for security vulnerabilities. OpenSCAP also provides a set of tooling and daemons that you can run against your host, at the Docker level, and at image level.

You can have containers sharing the same hardware and kernel but you can know which containers are bad or not — that’s where you need to make sure you have the right processes and technology in place to isolate that as soon as possible.

One really interesting point Van Tuin drove home was when he asked how many people in the audience had disabled the SELinux (Security-Enhanced Linux) mechanism for supporting access control security policies. The vast majority had, which isn’t wise.

“In a container world, you have to enable SELinux on a system. You need to have an extra level of security so the process can only communicate with the objects it’s designed to communicate with.” 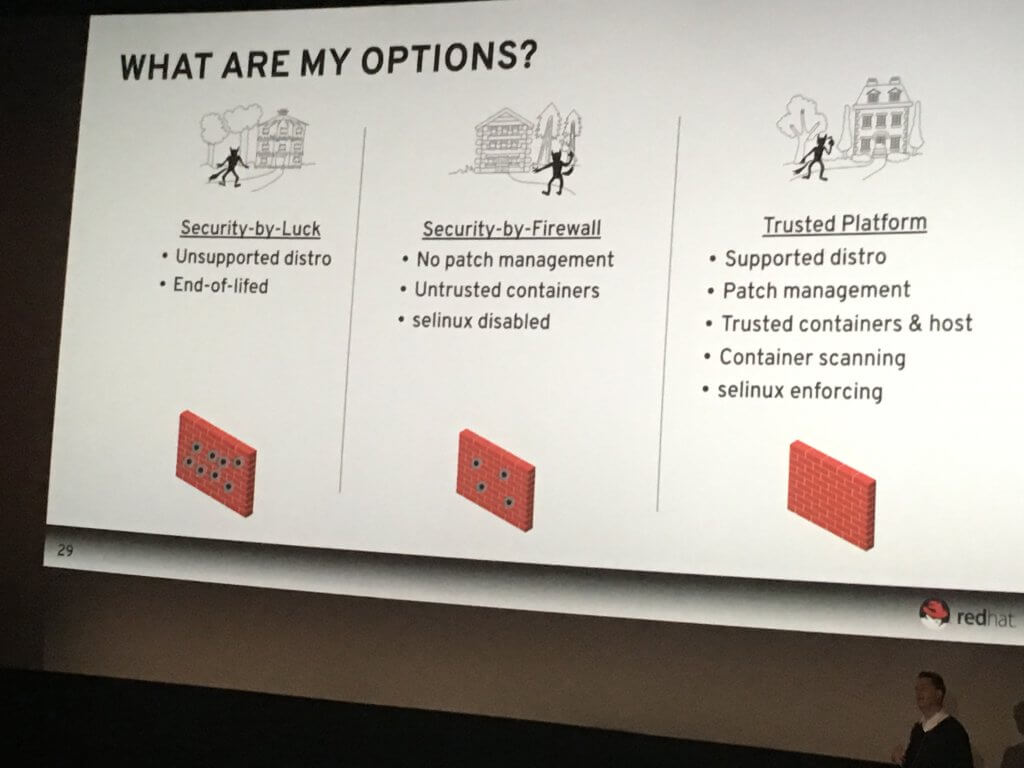 Van Tuin went on to apply the lovely extended shipping metaphor to how to keep containers secure — from the start.

“From a shipping perspective, you don’t package the container at the dock, you do it at the factory in case something breaks. Kubernetes provides the ability to automatically test that for when it moves to scale.”

The idea is that rather than patching those containers in a production environment, you rebuild a new version, often automatically. Then, once it passes, it moves into testing and then is automatically deployed.

“You can map new version and remove the old bad version,” Van Tuin continued. “If there’s an issue for version 1.2, I can automatically roll back to 1.1 if I’d like to.”

Beyond these the RedHat CTO offered some final container security best practices:

Jennifer Riggins is a culture side of tech storyteller, journalist, writer, and event and podcast host, helping to share the stories where culture and technology collide and to translate the impact of the tech we are building. Currently in London,...
Read more from Jennifer Riggins
SHARE THIS STORY
RELATED STORIES
Does the GitOps Emperor Have No Clothes? Why You Can’t Afford to Miss Data Decisions 6 Pull Request Tricks You Should Adopt Now: DoorDash Why Does the NSA Care about the Software Supply Chain? Terraform Cloud Now Offers Less Code — and No Code — Options
TNS owner Insight Partners is an investor in: Docker.
SHARE THIS STORY
RELATED STORIES
New Ebook: A Blueprint for Supply Chain Security Create a Local Git Repository on Linux with the Help of SSH How Canva Uses Data to Prioritize QA Testing Why You Can’t Afford to Miss Data Decisions The Missing Part of GitHub Actions Workflows: Monitoring
THE NEW STACK UPDATE A newsletter digest of the week’s most important stories & analyses.
The New stack does not sell your information or share it with unaffiliated third parties. By continuing, you agree to our Terms of Use and Privacy Policy.