Push Back: How Women in Tech Overcome Imposter Syndrome

Advice for women in tech to fight back against imposter syndrome, unconscious bias and being the only one in the room.
Nov 24th, 2021 7:00am by Jennifer Riggins 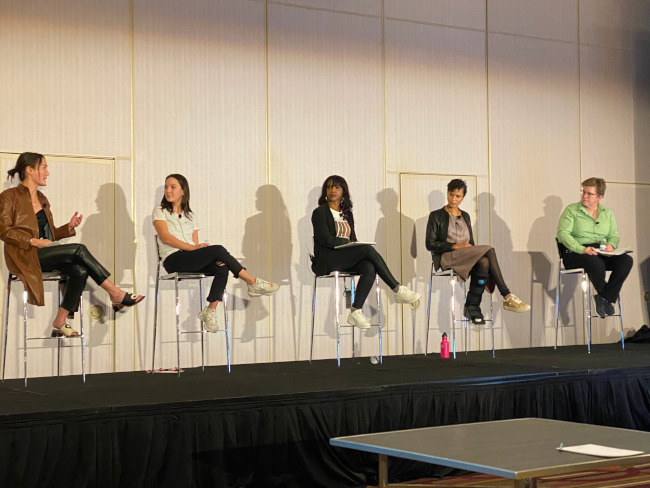 Correction: A previous version of this article implied that the panel will be available on YouTube. There are no plans to publish a video of the event on that channel.

There was a great panel on women and nonbinary people in tech at KubeCon+CloudNativeCon North America. But like those anecdotal chapters in history books that pretend to cover the breadth of Black or women’s history in a few pages, this panel was relegated to the end of Day Three, Pacific time. Presented as an in-person and livestream event, it isn’t even being published on YouTube with the other 229 conference presentations.

The panelists discussed women and nonbinary people’s imposter syndrome — if it’s even real — and how to carve out influence in tech. They got real, raw and resourceful and here we share their insights and experience with you.

Cloud native technologies are so new that almost no one can be an expert yet. And yet most of us live in a near-constant state of questioning whether we belong.

When Bastian joined observability provider Chronosphere about a year ago, her background was in building web apps and she says she knew nothing about data and observability. She wondered how she would be able to then exert influence on the team she was managing — What did success look like? What’s realistic?

She realized, “Chronosphere has a wealth of experts in this space and I do not need to be an expert to be a successful manager.” Instead, Bastian delegated her observability ramp-up to her team, realizing “I can focus on what I am passionate about which is people and culture and processes and building a business that’s inclusive and fun and has work-life balance. That is what I’m good at and that is what I’m an expert in.” 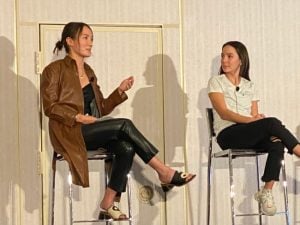 Sure, tech has us often surrounded by technical experts so we have to be willing to ask for help, but then we also have to stop downplaying our own knowledge, just because most rooms we’re in are filled with white men. “Have that influence because most of the time, they want to learn something from you,” Coll said.

When Vargas started her previous role at Forrester, she was half the age of most of the people she was consulting with. But she had just dedicated two years to researching the data center market, so, in order to prove her place at the table, her tactic became to often inundate customers with information until she hit on something they could learn.

“Once they figure out that you know something that they don’t know, then the balance shifts. It becomes a conversation. They start listening to you. You start talking about it instead of just trying to get their attention.” Vargas continued that you have to become comfortable in your own knowledge by doing the work to become an expert in the thing you’re talking about.

And don’t forget that tech often needs a fresh perspective. Bastian reminded the sparse KubeCon audience that you as a someone who self-identifies as green in tech can often raise a lot of things that so-called experts and more senior people forget about.

Push Back Against Imposition Syndrome

“I feel like imposter syndrome can feel like this multidimensional weight on your shoulders of ‘You don’t look the part.’ ‘You’re too young.’ ‘Your gender doesn’t fit.’ Very often I feel like I get lost in that and I lose sight of my knowledge and my expertise and I have to come home to me and my knowledge.”

Maybe it should be called imposition syndrome instead. When The New Stack interviewed developer advocate Nikema Prophet for another piece, she talked about how imposter syndrome is kind of thrust upon others as part of their self-worth:

“I think calling out imposter syndrome in people who are minoritized in tech is a real response to being treated like I don’t belong. It’s putting to onus on the person who is being marginalized instead of looking at the environment they’re put into. Everything is showing me externally that you don’t want me here.”

So next time you are questioning your place, give yourself a check — is this coming from a valid place within or from external influences?

For women and especially women of color, it’s a constant battle against gaslighting, micro-aggressions and worse in the workplace. An audience member asked for advice for how to shut down a male colleague constantly asking her to order him lunch — and her role is not as an assistant or anything near that task. Kirkland and Vargas said to push back asking what should you de-prioritize in your actual work to make time for his lunch order. Or just hand him a flier for the local pizza place. 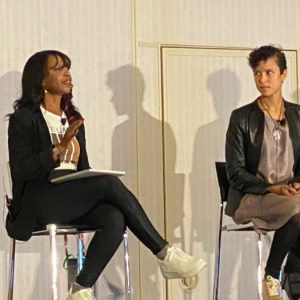 Coll even had to tackle bias by just checking into her hotel for her KubeCon work trip. Some white dude looked her up and down and gave her an unsolicited fried chicken recommendation.

But Coll is not managing anyone’s privilege or fragility anymore. This starts with recognizing the difference between how others feel about you and how you feel about yourself. And then understanding what your company feels about you.

She says you have to push back — for your sake and for your organization’s:

“How will the company thrive if you become your human self but you’re pushing back? When somebody says something that’s not good and it’s unconscious bias, do you push back? Do you take that risk? Do you ruffle feathers? Do you prepare for the white flight? Or do you hope, on their side of things, that they want to stay perched and they want that opportunity for the company’s sake and for you because you are a colleague and they have your back.”

Yes, you could be at risk for being seen as a troublemaker, but, with the huge tech talent gap, we are often in a place of privilege where we can find another tech role easily.  But it’s also about using that privilege to speak up for others, intervening and speaking up when you see someone in an uncomfortable situation or worse.

“I have too much to do and I can’t manage white fragility and white privilege anymore.”

“Himterrupting” — when a usually white male colleague Y talks over a usually female or nonbinary colleague X — is a common unconscious bias in action. Don’t be afraid to speak up with “X, what were you saying?” or “As X was saying…” or “Excuse me, I was much more interested in what X had to say.”

There’s power in helping out or intervening in any situation.

Go from Adversaries to Allies

Joslyn kicked off moderating the panel by citing that just 9% of developers are women and other gender minorities. That’s not only disgraceful, but it’s also dangerous — because if we are in charge of building the future then that future is inherently broken.

In order for organizations to avoid biases in day-to-day work, Vargas says first they have to acknowledge them. Then “have as many people review things as possible because you might not see it — it’s always worth it to get feedback.”

Some people are so mad to see you inhabit the spaces you do. Let them be mad. And some will say you’re not good enough, not qualified, that those spaces are inferior to theirs. That’s not your business. Their ugliness is theirs, not yours. Just keep being great. As you were

As a research analyst, Vargas says data can be a good intermediary. At her current role at Google, they anonymously polled staff, asking across terms: Does this language make you feel more or less uncomfortable? That created a safe way that anyone could speak up and then the data was aggregated so employees felt like they weren’t alone, validating “it’s not just me” that some language was a problem. 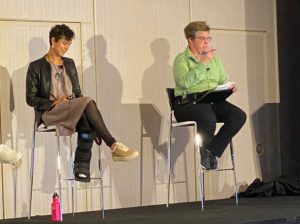 Organizations need to understand how disheartening and demotivating it is to be the only one in a room. As Kirkland pointed out, “In STEM and in life, women are often pitting against each other. Especially in these niche fields where it feels like there’s only one spot for the token woman. So if you’re in it with other women, then you [feel like you] have to fight for it.”

She continued that it’s teams’ and organizations’ responsibility to create an environment where it doesn’t feel like a fight for a single spot. From top-down and in between, organizations must show they are “open to women and diverse ideas and thoughts.” At Arize, that’s found in goals around more diverse recruitment efforts and in creating a safe space just for women and gender minority employees.

Vargas says women need to develop a habit of lifting each other up — both one-on-one and shouting out accolades in meetings, acting promotional of other people’s work. This can be properly citing someone in a blog post or research paper or, in a smaller setting or meeting, it can be calling out people by name for their ideas before building on them. It’s important to help people be seen.

“You’ll always meet someone else who needs that support and network,” Vargas said, pointing out that, no matter how “green” you are, you have something to give back.

There are so many different kinds of mentorship, that don’t even have to be official. Especially when you often have to overcome so much red tape and insider knowledge before you can even get into the tech industry. “I feel like it’s my responsibility now to help younger girls find a path forward and their way into tech,” Kirkland said.

And don’t forget you have the right to be respected not just by your team or company but by your customers and clients too. That’s where, as Kirkland pointed out, it’s up to those people in places of privilege to stand up when minoritized colleagues are harmed by unconscious — or straight up conscious — bias. An ally has to take the hit and make that effort, no matter what’s the setting.