Python for Beginners: How to Build a GUI Application

So far, in our Python for Beginners series, we’ve discussed many aspects of Python, such as lists, variables, tuples, functions, reading text from files, and so much more.

The one common denominator with the tutorials so far is that we’re only building text-based applications. Those applications are great and can come in very handy (especially on machines that don’t include a desktop environment or you need them to work in the background). You might even believe that Python isn’t capable of building apps with graphical user interfaces (GUIs).

Guess what? It is.

These GUI apps are capable of using things like:

With just a little help from a GUI toolkit, you can create GUI applications with Python. Don’t believe me? Let me show you how it’s done.

I’ll be demonstrating on Pop!_OS Linux, but this can be done with any distribution that supports Python.

Before we can create any GUI applications with Python, we have to install a Python library that wraps various GUI libraries (such as Tkinter, Qt (pyside2), wxPython, and Remi) in a single package to allow for fast and simple GUI programming. Out of the box, PySimpleGUI defaults to Tkinter, but you can switch it up as needed.

In other words, installing PySimpleGUI gives you everything needed to start building GUI applications with Python.

To install PySimpleGUI, you’ll need a machine that already has Python installed. You’ll also need pip available for the installation. If you’ve not already installed pip, do so with the command:

With Pip installed, you can now install PySimpleGUI with the command:

At this point, you are ready to start building your first GUI application.

The first GUI application we’ll build is the always popular Hello, World (with a New Stack twist). The first thing you must know is that the PySimpleGUI library must be imported into your application. We’ve done this before, so it should be second nature.

We’ll import PySimpleGUI into our application as sg with the line:

With that line, we can call any PySimpleGUI function with just sg.

Our next line draws the actual window for the application and looks like this:

What you see above is a variable (window) that uses the PySimpleGUI function Window to draw a graphical element labeled GUI SAMPLE with a size 200×100.

Finally, we use the .read() function (which returns the specified number of bytes from the file. the Default is -1 which means the whole file) to act on a button click with the line:

Save that file as hello_world.py. Run the program with the command:

What you should then see is a small window with a clickable button (Figure 1). 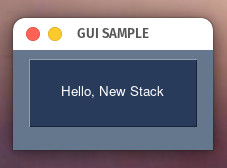 Click the Hello, New Stack button and the window will close.

This time around, we’ll create a GUI that accepts user input. This time we’ll import Tkinter package (which was installed with PySimpleGUI) to do the heavy lifting. Let’s call this file input_gui.py. The first line imports Tkinter and looks like this:

Next, we’re going to import simpledialog from Tkinter with:

We then define the root window with:

With the root window defined, we can then define the input dialog (naming the window “Input Test”) and prompt the user to type their name with:

Finally, we print out the user input back in the terminal window with the line:

Save and close the file. Run the app with:

You will see a small GUI window asking for your name with OK and Cancel buttons (Figure 2). 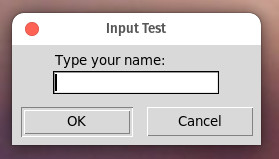 Figure 2: Our GUI for user input.

Type your name and click OK to see a message printed in the terminal window.

And there you go… you’ve created your first GUI application with Python. As you can see, this user-friendly language isn’t only limited to text-based apps. Python is, in fact, quite a versatile language, which helps to make it even more useful.

SHARE THIS STORY
RELATED STORIES
Why a DataOps Team Needs a Database Reliability Engineer Why You Need a Centralized Approach to Monitoring  How Ray, a Distributed AI Framework, Helps Power ChatGPT PromCon 2022: Why Prometheus Had to Change Qlik Plans to Acquire Talend. Is it a Data Management Double-Dip?
SHARE THIS STORY
RELATED STORIES
AgStack: Linux Foundation Project Will Bring Farms Online Cutting Database Costs: Comcast, Rakuten, Expedia and iFood Taking Data Curation to a New Level Why You Need a Centralized Approach to Monitoring  When ‘Cron Jobs’ Won't Work in Your Favor
THE NEW STACK UPDATE A newsletter digest of the week’s most important stories & analyses.
The New stack does not sell your information or share it with unaffiliated third parties. By continuing, you agree to our Terms of Use and Privacy Policy.