PyTorch Takes AI/ML Back to Its Research, Open Source Roots

Meta contributes the PyTorch machine learning framework to the Linux Foundation as AI adoption seems to be stuck and sinking, outside of some applications of AI in text and image generation, natural language processing, computer vision and some around pattern detection and predictive analytics.
Sep 15th, 2022 11:12am by Darryl K. Taft 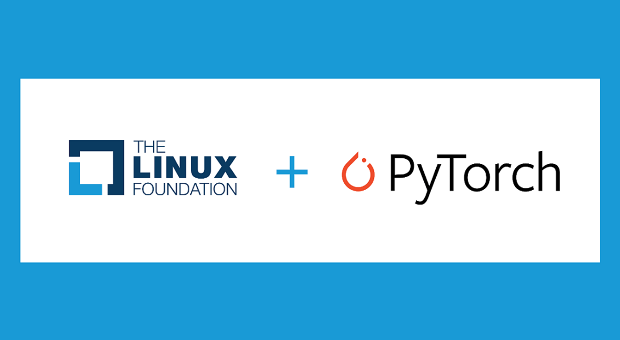 Meta’s decision to launch the PyTorch Foundation and contribute the PyTorch machine learning framework to the Linux Foundation indicates the maturity of the technology and a move closer to its open source roots.

AI adoption seems to be stuck and sinking, outside of some applications of AI in text and image generation, natural language processing, computer vision and some around pattern detection and predictive analytics, said Ronald Schmelzer, managing partner at CPMAI (formerly known as Cognilytica), a firm that focuses on AI research.

“Open source has been gaining much faster adoption than vendor solutions in the market, as can be seen by the difficulties encountered by many fast-moving startups, unicorns, and IPO’d companies,” Schmelzer told The New Stack. “With open source technology and data leading the way in AI, it’s no surprise that Meta is loosening its hold on PyTorch and letting the community guide its development.”

PyTorch moves to the new, independent PyTorch Foundation, under the Linux Foundation umbrella, with a governing board composed of representatives from AMD, AWS, Google Cloud, Meta, Microsoft Azure, and Nvidia, with the intention to expand over time. The PyTorch Foundation will serve as the steward for the technology and will support PyTorch through conferences, training courses, and other initiatives, Meta AI said in a blog post.

Since the release of PyTorch 1.0 in 2018, PyTorch has grown into the lingua franca of AI research, Meta AI said. “The framework will continue to be a part of Meta’s AI research and engineering work,” the team said in its post. “PyTorch is also a foundation of the AI research and products built by Amazon Web Services, Microsoft Azure, OpenAI, and many other companies and research institutions.”

Most of those organizations are founding members of the PyTorch Foundation.

“This is a Facebook + Google + AWS vs Microsoft story,” said Lawrence E. Hecht, an analyst for The New Stack. “The Stack Overflow survey collected data on almost 4,000 users. They were significantly more likely to have used Google Cloud recently as compared to the study average (35% vs 20%). That’s a 75% difference. It also catapults Google past Microsoft Azure (25% of PyTorch users and 23% overall), to be closer to the leader AWS (44% vs 41%).” 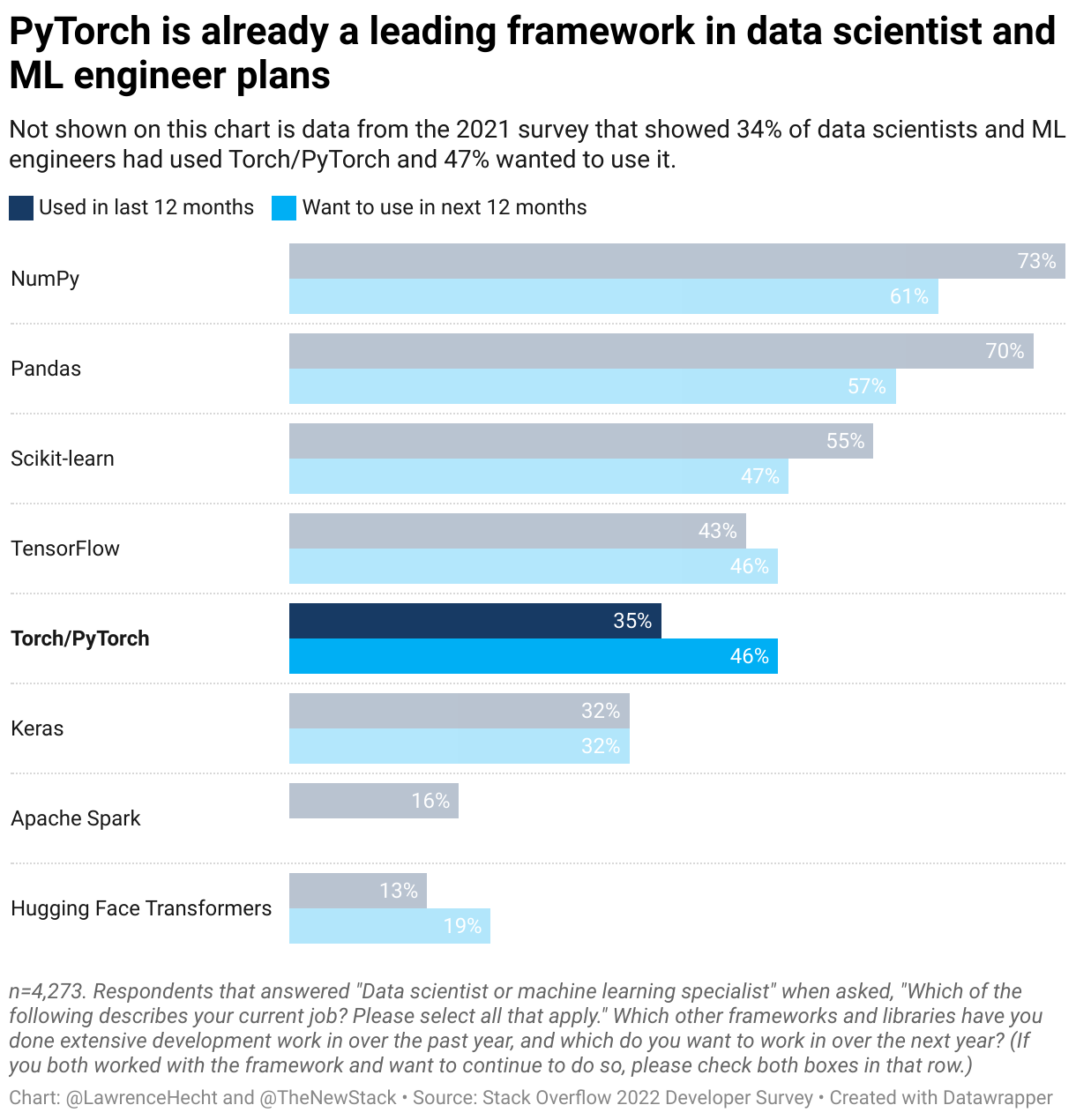 “In many ways, AI is retreating back to some research and open source roots, and the wave of hype and interest in AI by investors and for-profit companies seems to be waning,” Schmelzer said. “We’re past peak on AI hype and winding down. Yeah, we’re past irrational exuberance on AI and into some sober reality. Companies like C3 and DataRobot and others are really struggling now that AI is not top of the list for many organizations.”

Holger Mueller, an analyst at Constellation Research, noted that in general, it is better to have an open source framework at an independent organization. “We can also assume that Meta thinks that PyTorch is no longer where it wants to invest into solely – and maybe it is not that relevant for metaverse use cases,” he said.

According to Jim Zemlin, executive director of The Linux Foundation, AI/ML is a truly “open source-first” ecosystem. The majority of popular AI and ML tools and frameworks are open source. The community clearly values transparency and the ethos of open source, Zemlin said in a blog post, noting that the Linux Foundation will provide a neutral home for PyTorch.

Moreover, the PyTorch Foundation’s mission is to drive the adoption of AI tooling by fostering and sustaining an ecosystem of open source, vendor-neutral projects with PyTorch. It will democratize state-of-the-art tools, libraries, and other components to make these innovations accessible to everyone. It also will focus on the business and product marketing of PyTorch and the related ecosystem, Meta said. The transition will not entail any changes to PyTorch’s code and core project, including its separate technical governance structure.

“As of August 2022, PyTorch was one of the five fastest-growing open source software communities in the world alongside the Linux kernel and Kubernetes,” Zemlin said. “From August 2021 through August 2022, PyTorch counted over 65,000 commits. Over 2,400 contributors participated in the effort, filing issues or PRs or writing documentation. These numbers place PyTorch among the most successful open source projects in history.”

In January, PyTorch celebrated its five year anniversary since its inception in Meta’s AI labs. Now, all releases, features, and technical direction will continue to be driven by PyTorch’s community: from individual code contributors, those who review and commit changes, to the module maintainers.

“The creation of the PyTorch Foundation will ensure business decisions are being made in a transparent and open manner by a diverse group of members for years to come,” said Soumith Chintala, PyTorch Lead Maintainer and AI Researcher at Meta, in a blog post.

However, the technical decisions remain in the control of individual maintainers, he said.

While, up to now, the business governance of PyTorch was unstructured and “like a scrappy startup,” the next stage is to support the interests of multiple stakeholders.

“We chose the Linux Foundation as it has vast organization experience hosting large multi-stakeholder open source projects with the right balance of organizational structure and finding specific solutions for these projects,” Chintala said. Such projects include Linux, Kubernetes, Node.js, Hyperledger and RISC-V.

Darryl K. Taft covers DevOps, software development tools and developer-related issues from his office in the Baltimore area. He has more than 25 years of experience in the business and is always looking for the next scoop. He has worked...
Read more from Darryl K. Taft
SHARE THIS STORY
RELATED STORIES
Why Your Kubernetes Ship Is Sunk without Machine Learning AWS Inf2: A 12-Chip System for Large-Scale ML Production How to Lower Your Company‘s AI Risk in 2023 The Power and Ethical Dilemma of AI Image Generation Models PyTorch Poisoned in Software Supply Chain Attack
TNS owner Insight Partners is an investor in: The New Stack.
SHARE THIS STORY
RELATED STORIES
How Ray, a Distributed AI Framework, Helps Power ChatGPT How to Lower Your Company‘s AI Risk in 2023 2022 in Review: AI, IT Armies, and Poems about Food ChatGPT: Smart, but Not Smart Enough 5 Ways ChatGPT Could Supercharge Chatbots
THE NEW STACK UPDATE A newsletter digest of the week’s most important stories & analyses.
The New stack does not sell your information or share it with unaffiliated third parties. By continuing, you agree to our Terms of Use and Privacy Policy.