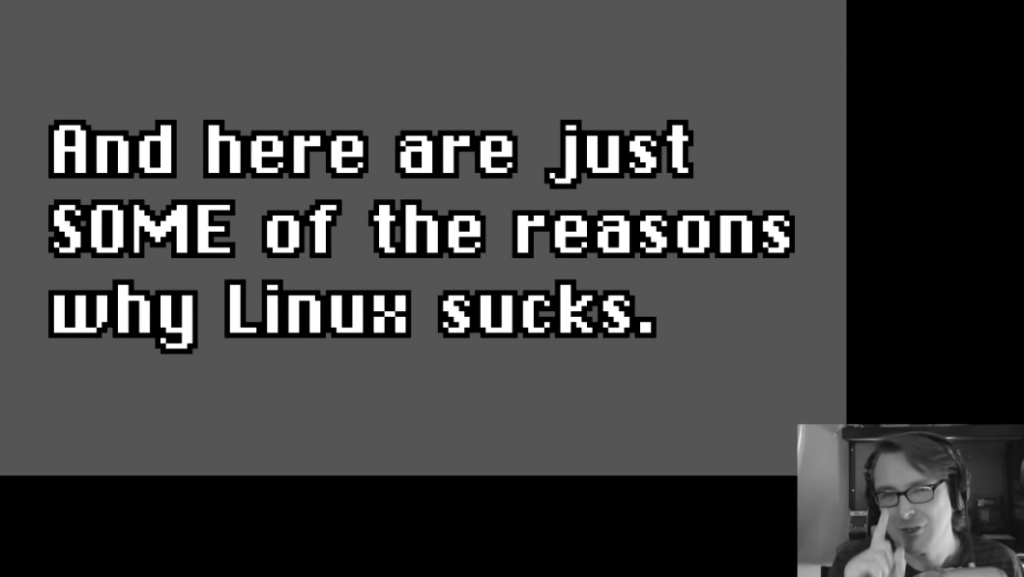 For over a decade, Bryan Lunduke has been giving talks at Linux and open source conferences, making the heretical argument that Linux sucks.

It’s a tradition, you could say.

He confirmed to us this week that in fact, Linux is “among” his all-time favorite operating systems. In fact, he’s been the deputy editor for Linux Journal since 2018. He’s also held marketing positions at prominent open source companies like SuSE and Purism, though he says now he’s “my own man,” updating his Lunduke Journal web site while releasing video and audio podcasts online.

Yet immersed in Linux’s culture, Lunduke has also styled himself as a people’s advocate, shouting out his own version of a critique from the user community. With conferences canceled this year, as he sheltered at home somewhere in Oregon, the Linux community’s own wannabe gadfly decided to cast his cathartic bile out onto the wilds of the internet.

So last week he created a rollicking 73-minute rant — is he village idiot or town crier? — offering a broad and jovial tour of the state of the Linux universe, and a loving poke at the foibles of the community. With occasional tongue-in-cheek deadpan — or are they his own brash opinions? — Lunduke shared his lively, occasionally provocative but mostly genial and good-natured argument that Linux sucks.

He begins by saying he’ll miss the hecklers…

Not the Year of Desktop Linux

Lunduke starts his talk with some positive things about Linux – beginning with Linux on servers, because “We kind of already won that.”

But then Lunduke moves on to Linux on mobile devices, which he calls, in terms of technology, “just the saddest bit of computing-iness that’s out there right now.” His issue is the shape of the Linux kernel underpinning Android. “When you look at it and compare it to what we have on desktops or servers, it is an almost unrecognizable beast. It is filled with DRM and closed source, and it just is not Linux.”

He acknowledges the Pine and Libre V phones, which actually do run pure versions of Linux — “and those are fantastic. But those are like…” (he holds his fingers together and makes a small, frail voice) “…this much market share. Right?” 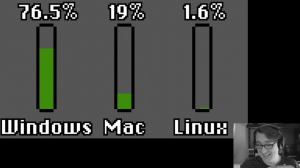 Lunduke claims there’s flaws in the various methods for estimating market share of Linux desktop use, but even if you discard these stats as dubious, metrics like search-engine searches for Linux have also been dropping over the last 16 years. “Here in 2020 it is so low, not only does it not fill up the first bar of pixels there, it’s only three pixels in.” He laughs.

“Desktop Linux is, whether you or me like it or not, currently dying a slow death. We just haven’t realized it yet. It hasn’t sunken in.”

Things Not to Blame

After listing a few positive things about Linux, Lunduke moved into a sort of middle category — things that we shouldn’t blame as the reason for why Linux sucks, but nonetheless contribute to a non-optimal Linux experience. For example, while Lunduke complains that Ubuntu (and Canonical) killed off some promising projects, “that doesn’t hurt overall Linux, right?” And he also gives backhanded shout-outs to Arch and Gentoo distributions. “Is Arch infuriating? Yep. Do Arch users talk about being Arch users too much…? Yes. We know this.” But they can’t be the reason Linux sucks — simply because of their tiny piece of Linux’s overall usage.

“So many people are throwing things at the screen right now,” he adds.

And he also thinks people should stop saying that a lack of Linux games is a reason the OS sucks — since today games for Linux are available on Steam and gog.com and “so many game distribution platforms that are working on Linux, at least to a certain degree, with high-profile triple-A titles. Maybe not all of them, but a lot of them. There’s tons and tons and tons of games that I can play on Linux, right now, and they’re fantastic.”

Time to Get Real

So it’s not until more than 30 minutes into his 72-minute presentation that Lunduke finally moves on to “the real reasons why Linux totally sucks right now in 2020.”

Reason #1? Backwards compatibility. As Lunduke sees it, software built for Linux years five to 15 years ago is “a massive, massive headache.”

“Occasionally, you’ll run across things that’ll run. But the more complex your software gets,” the less likely this becomes.

The problem is applications relying on specific versions of specific libraries — and it drives Lunduke crazy. He even argues it’s like drawing a line in the sand every few years and declaring it the end of an era, rendering everything older “now a retrocomputing platform that’s completely unsupported, wildly insecure, and unstable. That really, really sucks.”

Lunduke feints to some good news — he tells his online audience about AppImage, which “takes all of those dependencies for all of those old pieces of software, and bundles them into a singular ISO file, like you’d use to burn a CD or a flash drive.” The file sizes are large, but “in my mind, that fixes a ton of stuff,” he said.

“But here’s the thing that really just gets me upset,” he said, lowering his voice. “Major Linux distributions are just ignoring it and most Linux developers are not distributing their software that way — a couple are, most are not. It is very, very frustrating.”

“Boy would it be nice to not have to worry about this,” he said. 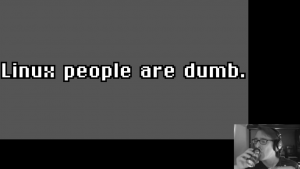 About 41 minutes in, Lunduke finally works his way to Reason #2 why Linux sucks, which he calls a “heady sort of topic.” Linux is an operating system, he begins — “If you would like to call it that,” he adds, offering alternately the description “a collection of disparate operating system chunks.” But whatever you want to call it — it’s run by a committee, whether you’re talking about desktop environments, applications, or full distributions. “And here’s the thing: nothing good ever comes out of a committee.”

He acknowledges that “in a certain sense, this kind of runs counter to the whole open source way of thinking. Like ‘Let’s put out the code, man, and we’ll all just work on it together, dude.’ I love that, right? I want to put flowers in my hair and I want to dance around the bonfire when we talk about that too.

“But I gotta be Darth Vader here for a second,” he says with a laugh. 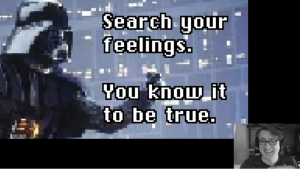 “You need a dictator. You just do.” And this brings Lunduke to is to the reason #3 Why Linux Sucks. “In general, open source and the Linux ecosystem is not just run by a committee — it’s run by a committee that has to please multiple megacorporations.” This leads him to a related Reason Why Linux Sucks — that “We are kind of corporate-controlled now, but we are also kind of not.”

Another major reason why Linux Sucks is the large number of prominent people who’ve been promoting Linux while using some other operating system. Lunduke puts up a slide proclaiming “That’s like the head of Pepsi doing a commercial while drinking a Coke.” There are many offenders, including people using Mac (or Windows) laptops at Linux conferences, or “Podcasts that talk about Linux but don’t run Linux.”

“I know a lot of the YouTube video creators and what-not out there are more and more using Linux, and that’s great,” he said. “But I know for a fact, a ton of the Linux podcasts that talk about Linux and use Linux as their topic — record, edit, and distribute on Macintoshes, or Windows PCs.” 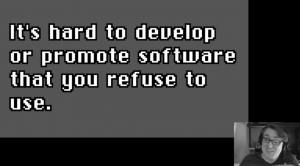 And then he ends the presentation with a final two-word slide: “Linux sucks.”

But Lunduke couldn’t leave it there. He had to look down the road to a rosier future, telling his unseen online audience that “I hope Linux is doing awesome one year from now.

“And I hope in 2021, when I stand on a stage somewhere and tell everyone all the reasons why Linux sucks — it can mostly be about systemd, he said. “And all these things that I just talked about will hopefully — fingers crossed — be really far in the rearview mirror.”

SHARE THIS STORY
RELATED STORIES
How Will Tech Jobs Change in 2023? What It's Like to Run a Mastodon Server in the Musk Twitter Era Why 'Explainable AI' Can Benefit Business Snack Stack: Turning Winter Comfort Food up to 11 How to Support a Million Users on Your Website: A Success Story
The Linux Foundation is a sponsor of The New Stack.
TNS owner Insight Partners is an investor in: Real.
SHARE THIS STORY
RELATED STORIES
Google’s Carbon among Other Potential C++ Successors Snack Stack: Turning Winter Comfort Food up to 11 Op-Ed: The Rise of AI Content Generators Is an Affront to Creativity Entrepreneurship for Engineers: Building for Customers’ Love How Will Tech Jobs Change in 2023?
THE NEW STACK UPDATE A newsletter digest of the week’s most important stories & analyses.
The New stack does not sell your information or share it with unaffiliated third parties. By continuing, you agree to our Terms of Use and Privacy Policy.