Last month saw a reminder of just how much the internet changed the world — along with moments of remembrance and reflection after the death of Jack Rickard.
Sep 20th, 2020 6:00am by David Cassel 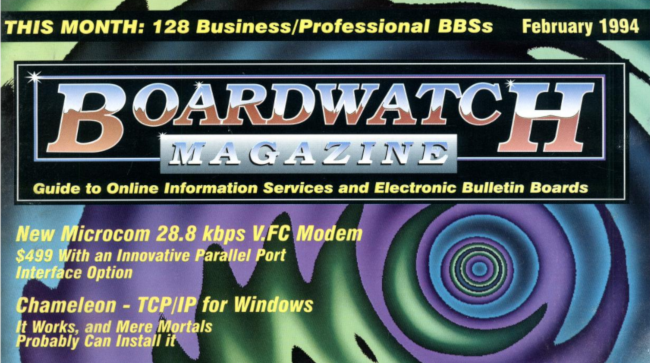 Last month saw a reminder of just how much the internet changed the world — along with moments of remembrance and reflection after the death of Jack Rickard. A larger than life character who followed his passions, Rickard founded and edited Boardwatch magazine in the late 1980s, a magazine first dedicated to the then fascinating new world of dial-up bulletin board systems (BBS), a sort of precursor of the Internet for the public. Boardwatch eventually became a seminal source of information about communications technology for a rapidly-changing world.

Also launching a series of successful internet conferences, Rickard lived through both the pre-internet era and the dotcom boom, finally moving into other realms of technology in a wildly successful career that, again and again, found him ahead of the curve on the next big thing. As friends paused to remember his remarkable life, it also offered a time to reflect on just how much the world has changed in the span of a single career, and how much a single life can change this world.

Every once in a while, someone on Twitter will argue that the father of the web wasn’t Tim Berners-Lee, but Jack Rickard himself, “via 10,000 BBS’s.”

An obituary in the small Southeast Missourian newspaper told the story of his life. In the early 1970s Rickard had enlisted in the Navy after high school, and “proudly served aboard the USS Midway as an aviation support equipment technician.” He began his career as a technical writer in the defense industry, with clients including MacDonald Aircraft and Martin Marietta Aerospace, remembers a later article, noting that Rickard even learned to fly, making several flights on a restored Douglas DC-3.

But Rickard was a member of Mensa — and “an early adopter of new technologies,” notes the paper, adding “His keen intelligence helped him to see the value of the internet as early as the 1980s.” The coach from Rickard’s high school remembers later paying his family a visit back in the 1980s, according to one local blogger. “With an old phone modem, computer, and an orange monitor, he hooked it up and messaged a guy in Washington, DC. He asked the guy ‘What is the weather like there?’ The guy typed back, ‘nice and sunny.’ This whole process took about 10 minutes, and he was smiling! I picked up my brick phone and called the time and weather phone number in Chicago, and gave him the time and weather in 10 seconds. I patted Jackie on the head, laughed a little and left.”

At the age of 32, “Jackie” decided to launch a magazine in 1987 about the then fascinating new world of dial-up bulletin board systems (BBS), a sort of precursor of the internet for the public. “Boardwatch started as a one-man-band operation for which he had personally typed the mimeograph stencils on his dining room table,” remembers Thom Stark, who came to know Rickard later when Stark became a contributing writer. The Southeast Missourian remembers the magazine’s circulation ultimately grew to 110,000.

And years later Rickard’s old high school coach was in for a surprise when he caught up with Rickard at one of Boardwatch’s conventions in San Francisco. “I thought to myself, wow this is a long way from Cape Girardeau, Missouri.

“Jackie and I got to meet and talk, joke around a little and then ‘Mr. Rickard’ was whisked away again. I was left standing with all the major officers of Cisco Systems and Intel. They were all impressed I knew the Great Man and even bought me a drink or two…”

He’d remember fondly that “Our Jackie was King of the Internet… the source of ALL knowledge at that time. It does make you proud when one of your kids, (students, people you coached) does well, and Jackie was at the top on the newest most earthshaking technology on earth.”

Rickard’s obituary emphasizes that he developed Boardwatch, “supported by a strong team.” In later years it included regular technical analysis from a wide variety of pundits including John C. Dvorak — and one very geeky comic strip about an anthropomorphic rabbit who ran an ISP from the basement of his home (Full disclosure: I freelanced two articles for them in 2000, but I’d already become a fan and a subscriber to Rickard’s magazine). Boardwatch stood out from the other magazines with its highly knowledgeable commentary, and Rickard’s own scrappy Editor’s Notes at the beginning of each issue, which always took the jaunty tone of well-informed common sense — and always ended with the cheerily self-deprecating title “Jack Rickard, Editor Rotundus.”

“If there’s one thing I miss from the BBS age,” posted one Twitter user in 2017, “it’s Jack Rickard’s (editor @ Boardwatch Magazine) answering letters to the editor…”

Many issues of the magazine are still preserved online at archive.org. One 1994 issue has the prescient headline “World Wide Web — the new BBS,” along with a review of a new web browser called Netscape.

But poignantly, one of Rickard’s editorials is also forever preserved at textfiles.com, a website preserving digital documents from the era of dial-up bulletin-board systems. “Before the news media made the transition to online services, everything was on paper, and if a BBS user wanted to share, they had to type in the entire article themselves and pass it along,” remembers their archive of news files. Among their hand-crafted treasures is a 1993 text file that Rickard himself released into the BBS community to share his editorial and a Boardwatch article about the FBI’s seizure of the popular Rusty n Edie’s BBS over suspicions of software piracy and copyright infringement. Rickard decried the FBI for “a planned campaign of terror intended to frighten BBS operators into compliance by the threat of an electronic and economic death penalty.”

In a world where just 12 million Americans had ventured online, and there was still no web site at whitehouse.gov, Rickard urged his readers to make their opinions known to their elected officials. “Bill Clinton probably doesn’t read all his e-mail at 75300.3115@compuserve.com. But somebody will have to…”

And he’d signed it, as always, “Jack Rickard, Editor Rotundus.”

Stark remembered Rickard with a “fierce intelligence… a whip-smart, no-bullshit dynamo, impressive in every way.”

Boardwatch became the place to advertise if you were selling software (or hardware) for the entrepreneurs running those local dial-up systems. But its strong funding gave it a sturdy foundation for a 15-year run chronicling the vast changes happening as the whole world began finding its way online. As the years rolled on, many bulletin board operators also began offering internet access, and the magazine’s focus gradually expanded into the larger world of commercial internet services — a process Rickard himself describes in the movie BBS: the Documentary.

“As he put it, many BBS operators just changed the software, used the same equipment, ordered up an Internet connection, and they were in the dialup Internet access business,” according to the description of his interviews for the documentary.

Soon there were ISP industry tradeshows and the annual Boardwatch Internet Service Providers Directory (which the web site “Acronym Attic” still remembers was commonly referred to as BISPD). Boardwatch’s advertisers included everyone from tech powerhouses like Sun Microsystems and Intel to an up-and-coming Linux company named Red Hat Software, Inc.

While disruptive technologies revolutionized the way the world communicated, the publishing world changed too. In 1998, the magazine and its conference business were sold for $29.5 million (in stock and cash) to Mecklermedia. “The properties we are acquiring are the leading trade show, print, and website resources for ISP professional and related personnel,” Mecklermedia’s chief executive said at the time — though months later Mecklermedia was in turn acquired by Penton Media.

Flush with millions of dollars, in 2008 Rickard founded EVTV, which his obituary describes as “an internet-based platform that taught individuals methods to convert gasoline-powered vehicles into electric-drive vehicles.” Later topics also included solar power storage. Boardwatch contributor Thom Stark always remembered Rickard as sounding like W.C. Fields, adding that “Returning to Cape Girardeau, Missouri, to care for his aging parents eventually restored the Southern twang he’d all but eliminated during his years in Longmont, Colorado, where he started Boardwatch, so you don’t hear that resemblance as much in his EVTV videos.”

Stark’s remembrance also suggests Rickard may have been motivated by a non-compete clause the publishing company that bought Boardwatch — and by Rickard’s own business converting cars into electric vehicles. In a 2015 phone conversation, Rickard told him he’d closed the shop a few years earlier because “it just didn’t make sense anymore. Why pay me fifty thousand dollars or more to convert even a classic car to electric, when you can get at least double the range, and a whole lot of leading-edge technology for a lot less money by buying a Tesla?” Rickard poured his energy into EVTV, which “gave him the outlet his passion demanded.” The Southeast Missourian remembers Rickard organized several conventions about electric vehicle conversions, telling the newspaper in 2013 that “I believe we’re going to see a lot more of these vehicles in the future.”

In the years that followed, Rickard lived in a historic house with a web camera pointing over the Mississippi, remembers one local blogger — plus a hangar with his own recreational aircraft (including a helicopter). “He led us back into the garage through a room that looked like a cross between an automotive garage and a laboratory. Hanging overhead was a vintage wooden Chris Craft boat, and the rest of the room had small cars and lots of scientific paraphernalia coexisting.”

Throughout his life, he’d learned to have faith that his unlikely ventures would succeed, and the blogger remembers that “At some point in the afternoon, Jack let slip that he could afford all his toys because he got in on the ground floor of the internet.” Last week he fondly remembered Rickard as “a fountain of history and lore.” But Rickard had also shared memories of two different near-death experiences — in a car crash, and in an airplane crash — and the blogger ended up capturing Rickard’s own musings on mortality itself.

“I have to be OK with it,” he’d said, adding wryly, “Everybody in the country treats death as an exception: ‘Oh, what happened…?'”

The blogger got some remembrances from that aging coach at the local high school, who remembered Jack as a student in the early 1970s. “The young boy with the towel over his head, who was always the last in the pool turned into a well-respected adult, who was truly a leader in the biggest life-changing technology in the last 100 years. That was Jackie, a dry wit with a deep understanding of technology and way of explaining it to others.

“Rest in peace, I am sure heaven will need improving, and you, my friend, will be leading the way.”