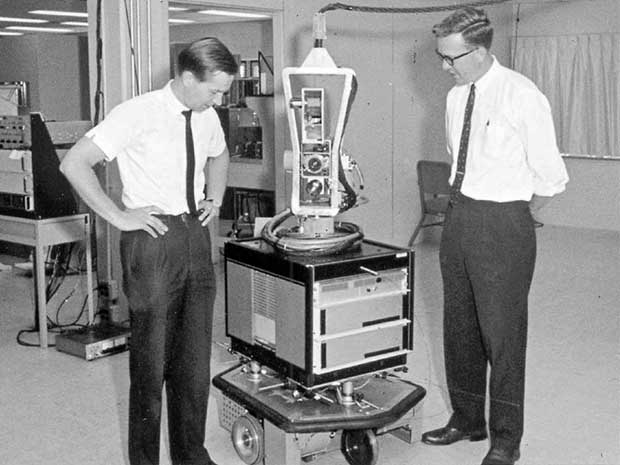 Shakey the robot has been called many things. Wikipedia hails it as “the first general-purpose mobile robot to be able to reason about its own actions.” A 1969 informational film described it as “an experiment in robot planning and learning.” And 51 years after its invention, Shakey has been declared an “IEEE Milestone.”

The IEEE Milestone program, launched in 1983, honors “significant inventions, locations, or events related to electrical engineering and computing that have benefited humanity,” according to IEEE Spectrum. Over the last 34 years, the program has recognized 174 pieces of engineering history — and last month, it was Shakey’s turn. Shakey’s milestone plaque will be installed in the main lobby of research company, and creator of Shakey, SRI International in Menlo Park, California (next to a plaque commemorating the inception of the ARPANET in 1969.)

The plaque explains to curious visitors that Shakey “could perceive its surroundings, infer implicit facts from explicit ones, create plans, recover from errors in plan execution, and communicate using ordinary English.”

The Shakey project ran from 1966 to 1972 and was seen as a way of combining the various fields of artificial intelligence — logic, formulating plans, and executing plans — with computer vision and navigation. It also made use of the Stanford Research Institute Problem Solver (or STRIPS), which was an automated planner — and, more importantly, an early instance of artificial intelligence.

Shakey was equipped with a TV camera, as well as “cat whisker” feelers to detect objects. A radio link connected Shakey to a PDP-11 computer, which could process the incoming data, and send commands to the circuits that controlled the robot’s motors. Interestingly, Shakey used the Lisp programming language — invented in 1958 — as well as FORTRAN, and responded to simple English-language commands. A command to roll 2.1 feet would look like this:

But more importantly, the robot itself would first plan out the route it was going to take, even plotting a course around obstacles. And it could perform other useful tasks, like moving boxes.

The team produced a 24-minute film about Shakey in 1969 which reveals some more details. Shakey “communicated” with the project team via a teletype and a CRT display — and sometimes, they’d also see how it reacted to pranks. Wearing a black cape, “Gremlin Charlie” appears in one scene in the video, nudging the block off of Shakey’s push bar. Gremlin Charlie “symbolizes an agent of change,” the video’s narrator explains. But Shakey’s cat-whisker wires detect the new position of the box, and Shakey simply made a new plan to get back to work. 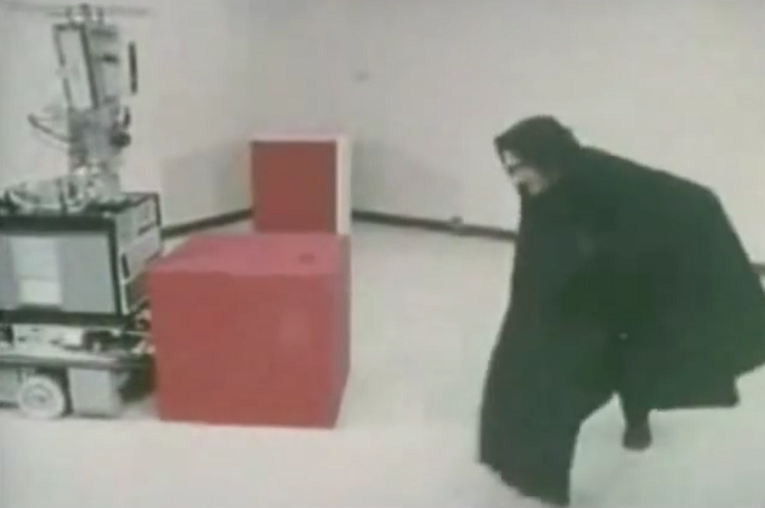 The team thought their robot might have military applications. “Someone had in mind dropping the robot on a road in China and have it count tanks,” remembered Nils Nilsson, one of the project’s leaders. “We did get renewed through ’71, then DARPA said ‘no more robots.'”

In honor of Shakey’s IEEE milestone plaque, there was a special ceremony reuniting members of the original project team — many of them now in their 80s — and IEEE Spectrum described Shakey’s big night. “Dignitaries read commendations; former colleagues reminisced, telling a few tales that might not previously have been presented for public consumption; and a ‘grandchild’ made a guest appearance.” The grandchild was the SaviOne, a delivery robot now in use at a Silicon Valley hotel.

And of course, there were also some stories about the good old days. “We worked for a month trying to find a good name for it, ranging from Greek names to whatnot, and then one of us said, ‘Hey, it shakes like hell and moves around, let’s just call it Shakey.'” 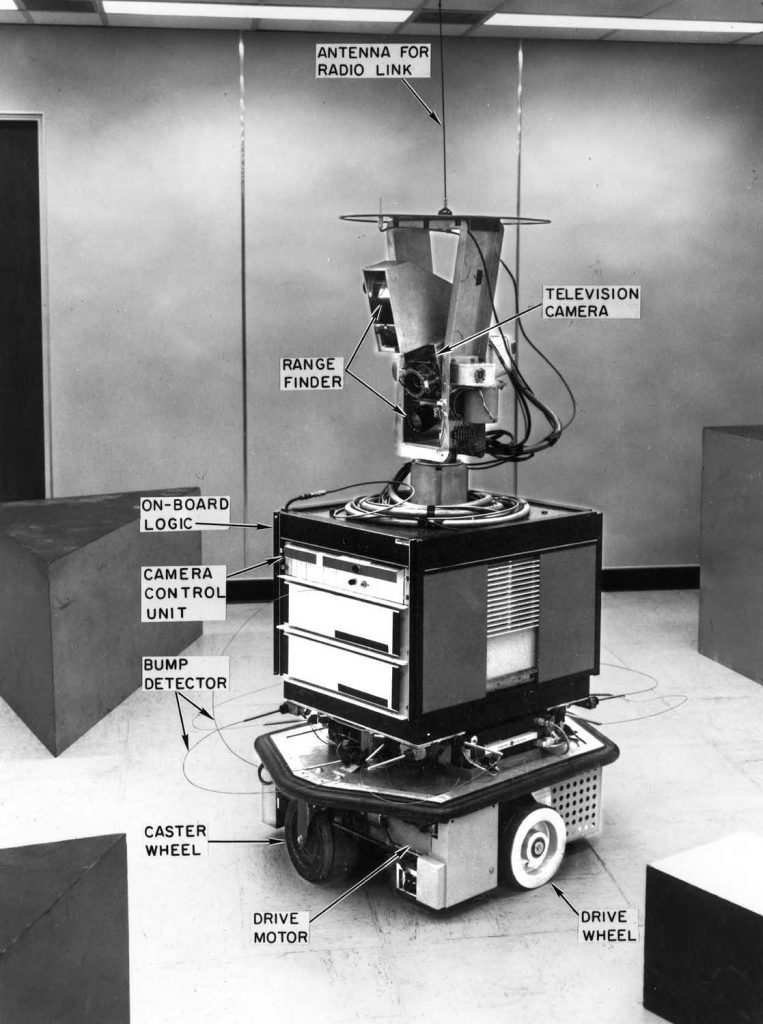 In fact, the robot seems to have been ahead of its time. For example, the Shakey project developed the search algorithm A* — but at first its arrival went unappreciated. “We couldn’t get it accepted by any reputable journal of the day,” remembered Peter E. Hart, one of the project’s leaders. “Bert [Raphael] was so irritated by that, he went off and founded another AI journal [the Journal of Artificial Intelligence] just so he could publish it. Eventually, it got published in an IEEE Transactions.”

Hart also remembers they were visited by some “union people…wondering if robotics and automation would disrupt employment.” 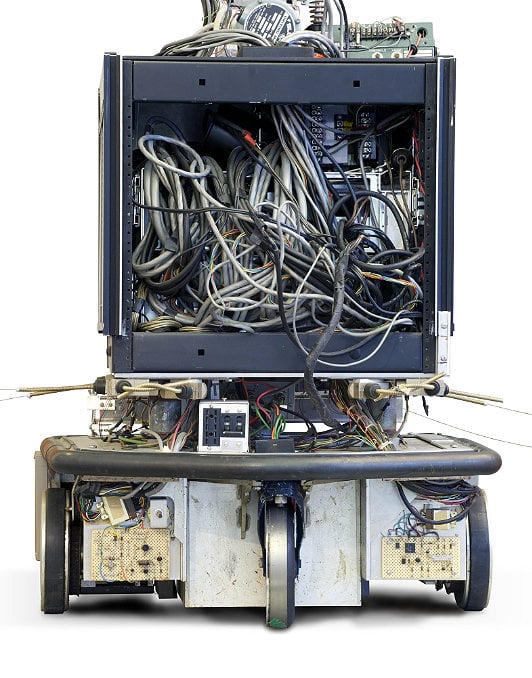 But more important was its impact on robots still to come. “Shakey’s software architecture, computer vision, and methods for navigation and planning proved seminal in robotics and in the design of web servers, automobiles, factories, video games and Mars rovers,” read the official plaque. In fact, the Engineering and Technology History Wiki quotes Google’s head of robotics research for the last seven years as saying Shakey “became a model for future robot systems for half a century.” A 1962 method devised for Shakey to identify when points in an image fall into a line is still being used today in self-driving cars.

At the ceremony, Nilsson complained that our modern-day robots still haven’t integrated enough A.I. “Today’s robots can wander around well — the two-legged ones can stand up, they have good control systems — but they don’t know what they’re doing.”

But the founder of the company behind that Silicon Valley delivery robot pointed out that real-world robots face unexpected obstacles — and seems wistful about the early days when robots rolled in an innocent laboratory environment. “We put robots in hotels, where you have drunk people. That is another obstacle you have to deal with.

“We made the robot cute, so even drunk guys, when they knock it over, usually pick it up,” Hart said.

Photos from the Computer History Museum and SRI International.

SHARE THIS STORY
RELATED STORIES
A Brief DevOps History: The Road to CI/CD SRE Housekeeping: Where to Get Started for New Hires Golden Paths Start with a Shift Left Why 'Explainable AI' Can Benefit Business The Power and Ethical Dilemma of AI Image Generation Models
SHARE THIS STORY
RELATED STORIES
2022 in Review: AI, IT Armies, and Poems about Food Java's James Gosling on Fame, Freedom, Failure Modes and Fun Why 'Explainable AI' Can Benefit Business How to Get Started Filling 3.4 Million Cybersecurity Jobs How Jit Builds a Platform Engineering Mindset in the Cloud
THE NEW STACK UPDATE A newsletter digest of the week’s most important stories & analyses.
The New stack does not sell your information or share it with unaffiliated third parties. By continuing, you agree to our Terms of Use and Privacy Policy.