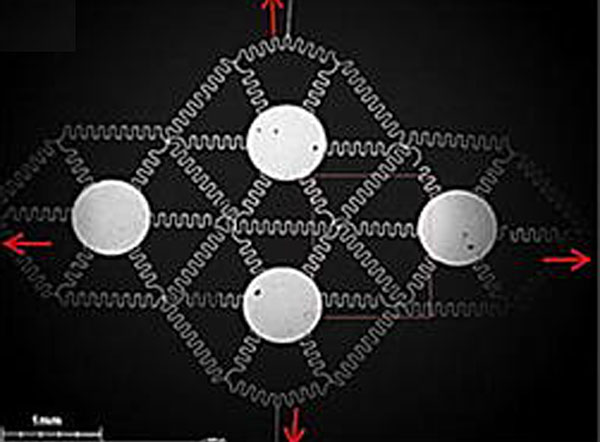 From the sleek smartwatches linked up to our smartphones, to the activity trackers monitoring our heartbeats and footsteps, it’s clear that wearables are becoming increasingly prevalent. As one might expect, such devices will no doubt offer some big steps forward for medical applications as they become more streamlined and powerful, providing a welcome alternative to the relatively unwieldy gadgets used in the past. The potential uses for medically oriented wearables include those that produce electrocardiograms to those that measure blood pressure, but there are also devices that help rehabilitate recovering drug addicts or — at the other end of the spectrum — help you get high.

But what if such medically oriented wearables could also transform their shape and size, and even relocate themselves to different parts of the body when needed? Inspired by the way living things change shape when they bloom or grow — without losing their structural integrity — researchers from the King Abdullah University of Science and Technology and University of California, Berkeley are proposing an electronic platform that can dynamically reconfigure itself into various shapes without losing functionality. The idea is to widen the field of opportunities for creating the next generation of innovative wearable and implantable electronics: transformable and polyvalent biomedical gadgets that can be utilized for diagnosis, treatment or monitoring one’s health, as well as delivering drugs within the body.

According to the research team’s recently published paper in Applied Physics Letters, amorphous silicon was the material chosen for their prototypical platform — one reason being that it would ensure compatibility with the majority of today’s electronics that use silicon, a substance that conducts electricity well and is relatively stable. On the other hand, silicon is nevertheless relatively fragile, thus conventional silicon-based electronics cannot bend nor flex all that easily without being damaged.

To get around that problem, the researchers examined previous work that adapted paper-folding (origami) and paper-cutting (kirigami) techniques to create flexible, bendable surfaces. Ultimately, they decided to focus on using a fractalized array of efficient forms — namely the hexagon — as a way to maximize stretchability, without any gaps. In looking at various geometries found in nature, the team realized that an array of honeycombs was the most-effective layout for shape-changing reconfigurations, in this case, morphing the original honeycomb shape into four-lobed quatrefoils and star shapes, as well as more irregular forms.

“Quatrefoils can be used for rectangular object-based operation, while stars are for more intricate architectures, and irregular-shaped ones are specifically for implanted bioelectronics,” explained Muhammad Hussain, paper co-author and a visiting professor at the University of California, Berkeley, on ScienceDaily. 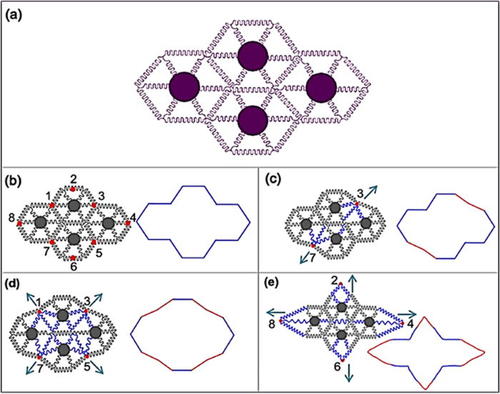 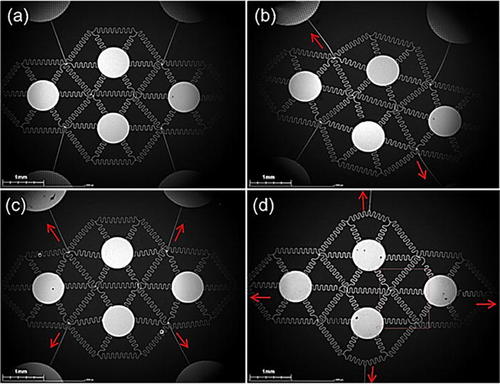 The different configurations as seen under the microscope.

The honeycomb scheme also allows for different functional regions, including the cells themselves, circular “islands” where electronics could be placed, as well as “serpentine interconnects” that line the edges of the cells in addition to connecting the islands with one another. Moreover, the interconnects can serve as electrical links between the “islands”, as well as acting as mechanical supports that absorb much of the forces that occur when the platform is stretched and deformed.

To test their prototype, the team then stretched both a microscaled and then a larger, optimized macroscaled version of their honeycomb design, pulling it along various points in order to form quatrefoils, star and irregular shapes, while measuring the amount of stress and strain along the interconnections and nodes. 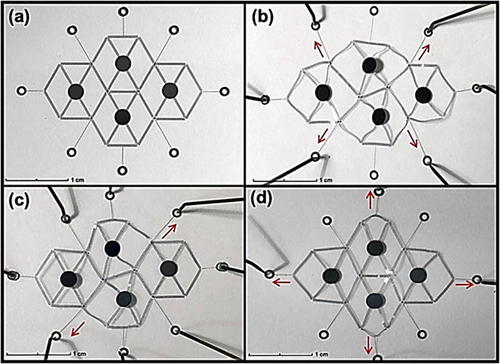 Stretch tests done with the larger, macro-scaled model of the reconfigurable platform.

With the enhanced macroscaled model (which eliminated some ineffective interconnections), the team found that the platform could stretch up to 21 percent more along the vertical axis, and up to 36.6 percent more along the diagonal axis. In the future, the team suggests that the stretchability could be further augmented with interconnections made with ultra-stretchable materials.

While there’s still room to improve, the team’s work demonstrates that a well-designed reconfigurable electronic platform could very well open the door to a wider range of versatile wearables. In addition, it could help us develop implantable biomedical devices that would have the ability to form distributed sensory networks on and within the body, performing a number of useful tasks that could ultimately keep us healthier in the long run.