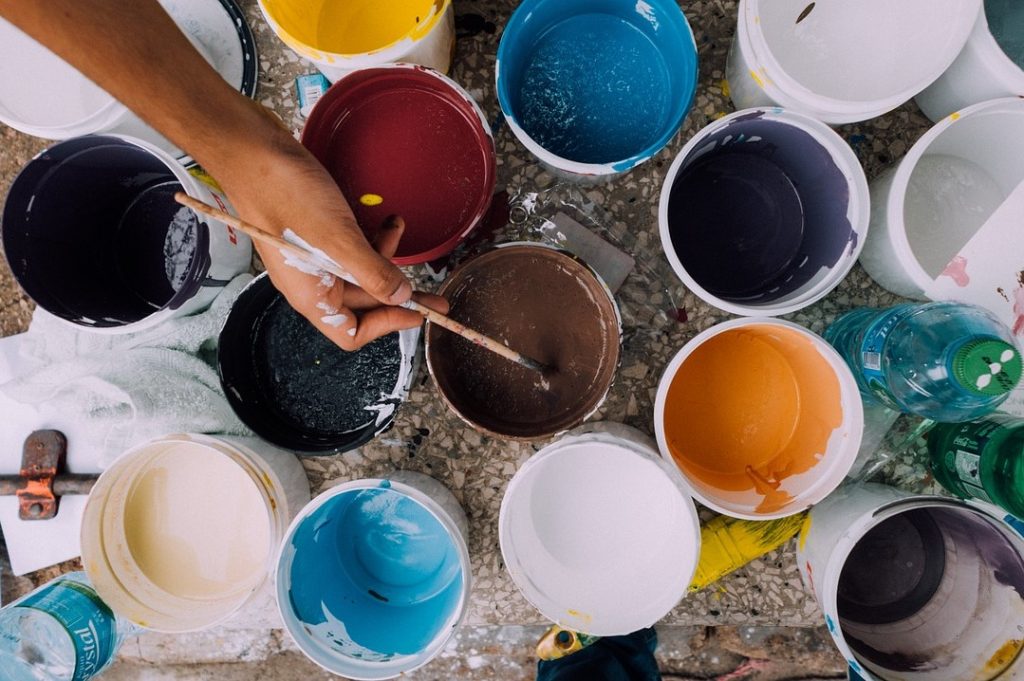 Using open source software is commonplace, with only a minority of companies preferring a proprietary-first software policy. Proponents of free and open source software (FOSS) have moved to the next phases of open source adoption, widening FOSS usage within the enterprise as well as gaining the “digital transformation” benefits associated with open source and cloud native best practices.

Companies, as well as FOSS advocates, are determining the best ways to promote these business goals, while at the same time keeping alive the spirit and ethos of the non-commercial communities that have embodied the open source movement for years.

In partnership with The Linux Foundation’s TODO Group and co-sponsored by VMware, The New Stack conducted its second annual “Open Source Programs in the Enterprise” survey to investigate how and if these open source programs are succeeding. We found an emerging consensus about how best to manage and promote open source initiatives.

This article starts with the study’s key findings, proceeds to charts and analysis and concludes with a discussion of the study’s methodology.

More than three times as many people participated in the 2019 survey as compared to last year, but many of the findings remain consistent year-over-year. This indicates that the 2018 results were not skewed by a significant over-representation of early adopters involved with The Linux Foundation’s TODO Group. In other words, the survey represented a wide cross-section of enterprises and not just those that were already part of what might be considered a tight-knit group of like-minded open source fans. Overall, the data’s consistency provides confidence that the findings are not the result of self-selection bias.

Over 85% of respondents said their company at least sometimes uses open source components for noncommercial or internal reasons, which was a drop from last year’s 88% figure. This high level of adoption is consistent with many other studies’ findings, even those that are not open source focused surveys. Sixty-nine percent are at least sometimes using open source code in commercial products, with that figure jumping to 83% among technology companies. Just like with non-commercial use, adoption of open source in commercial products actually dropped from 72% the year before. The stability in these figures indicates that the next big changes in open source within the enterprise will be regarding the scope of its use and the degree to which enterprises emphasize giving to the community.

Participation in the open source community is significantly higher among technology companies. For example, 56% of respondents at tech companies say their organizations sometimes or frequently contribute code upstream as compared to 43% among the full sample.

A company’s size is also correlated with its open source footprint. Although big companies are often accused of not giving back to the open source community, the data says otherwise. Organizations with more than 10,000 employees are frequently contributing code upstream 41% of the time, while only 14% of companies with 2 to 50 employees are doing so.

The largest companies, many of which are internet-scale technology firms, have the resources to dedicate to projects that may not be directly generating revenue. Although smaller firms often use open source code in their commercial products, they are sometimes more focused on their own company’s projects as opposed to those on which they rely. 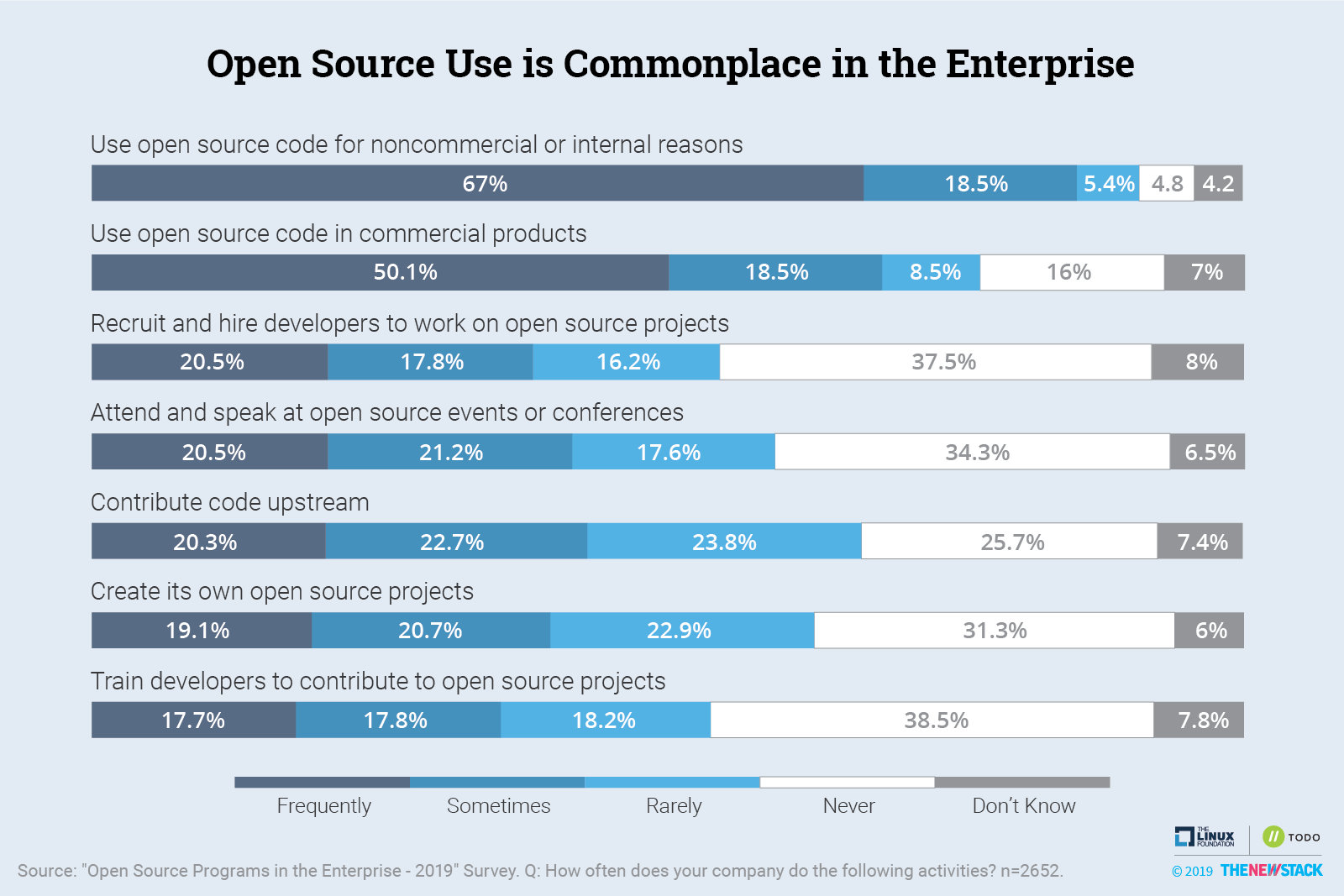 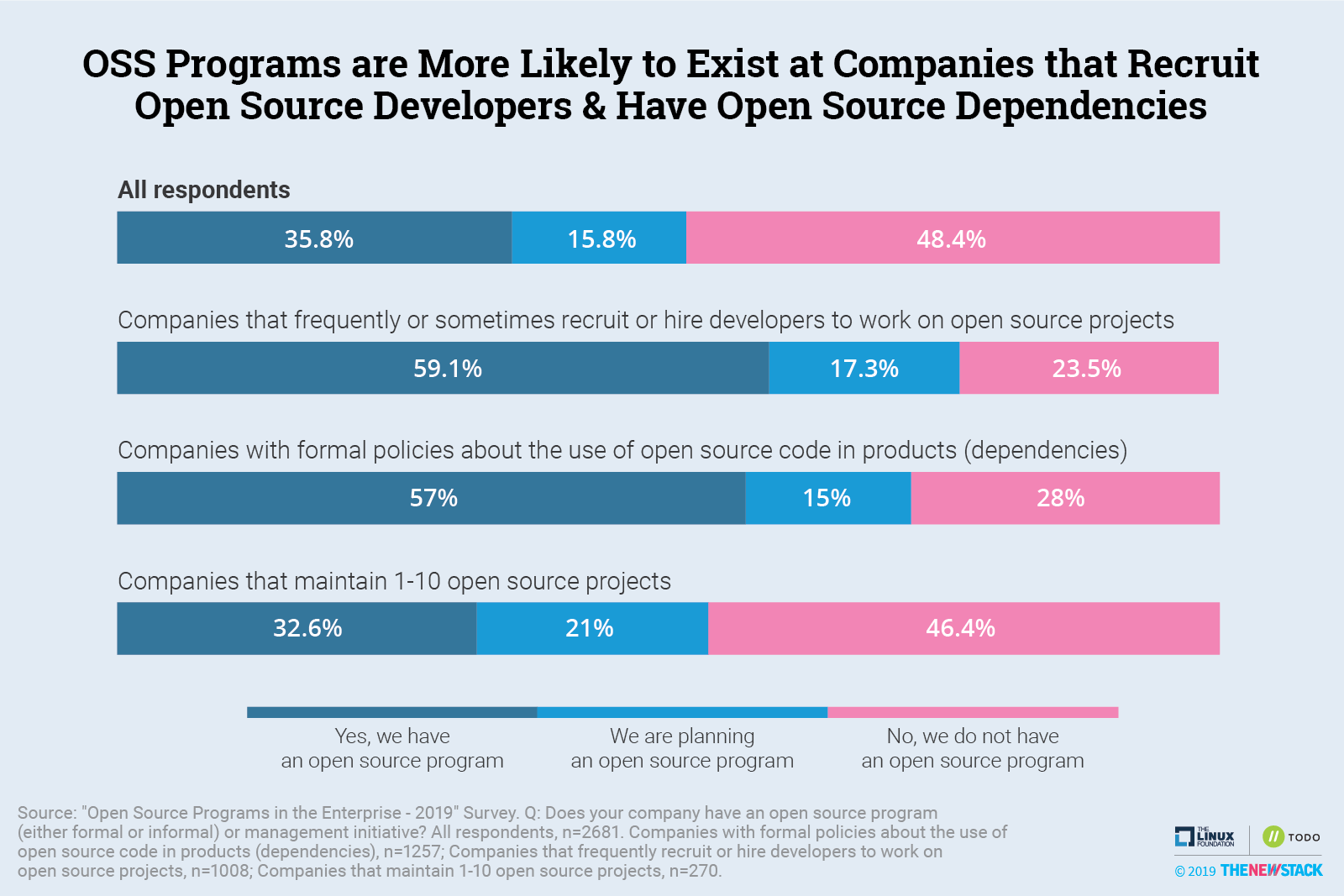 With this year’s larger sample size, we are able to more confidently assess how popular open source programs are across different industry verticals. The industries with the largest representation in the study saw little variation with technology and telecommunications-related companies seeing one and two percentage point drops compared to 2018. Furthermore, most (79%) Internet-scale technology companies with more than 10,000 employees already have an open source management program, which is a slight increase compared to last year.

Industries that typically do not attempt to monetize open source were the least likely to have an open source program, with less than 22% of respondents in Defense, Education, Insurance, Retail and Manufacturing saying these programs exist. 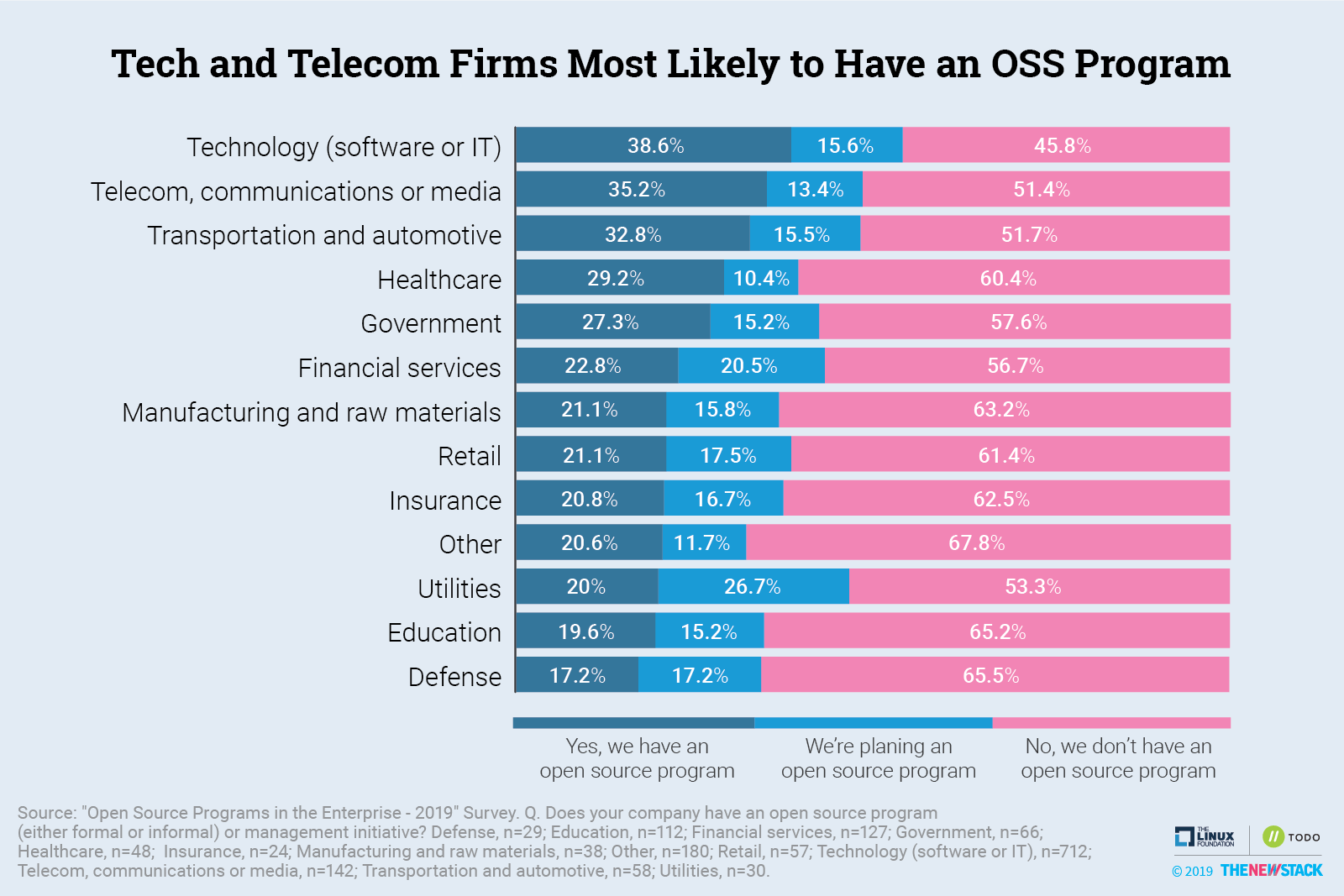 As existing open source programs mature, there is growing agreement about what they are supposed to do. This increasing certainty over the program’s role within a company resulted in many of the answer choices seeing a drop in the percentage of users mentioning them. This was primarily because about 10% fewer checkboxes were ticked for several “select all that apply” questions.

Increased innovation rose to become the most cited benefit of open source programs. Lower support costs were also more likely to be seen as a benefit. However, people have become less optimistic about the programs’ impact on development speed and a company’s ability to quickly bring new products to market.

Culture change dropped dramatically as a benefit of open source programs, but that is mostly because last year we asked people to think about culture change in terms of progress towards digital transformation, openness and agility. Since many of these changes are included in other benefit categories, the latest study just asked about how culture change improves interaction among departments. 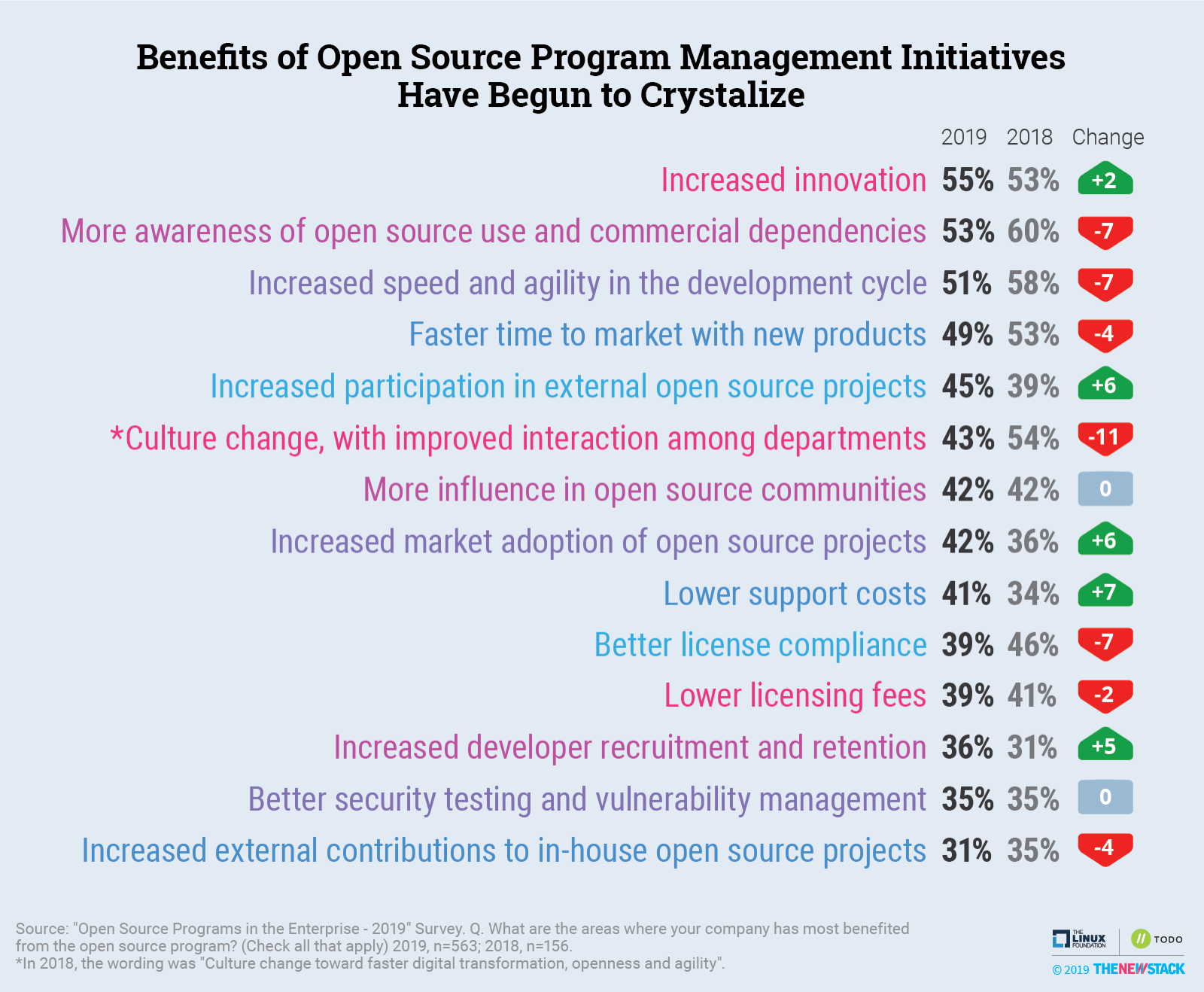 Despite a drop in people citing it as a benefit, fostering open source culture within an organization continues to be the top responsibility of an open source program or initiative. Facilitating the use of open source in commercial products saw a tick down but actually rose in relative prominence, going from the fifth to the second most mentioned responsibility of a program. Overall, open source programs are moving towards engagement of developer communities and see involvement with external projects as a benefit unto itself.

Maintaining OS license compliance reviews and oversight is less likely to be a primary responsibility of open source programs, going from #2 to #5 on the list. This does not mean license compliance is less important. Instead, fewer companies are requiring open source groups to work on a day-to-day basis with Legal and Compliance departments. 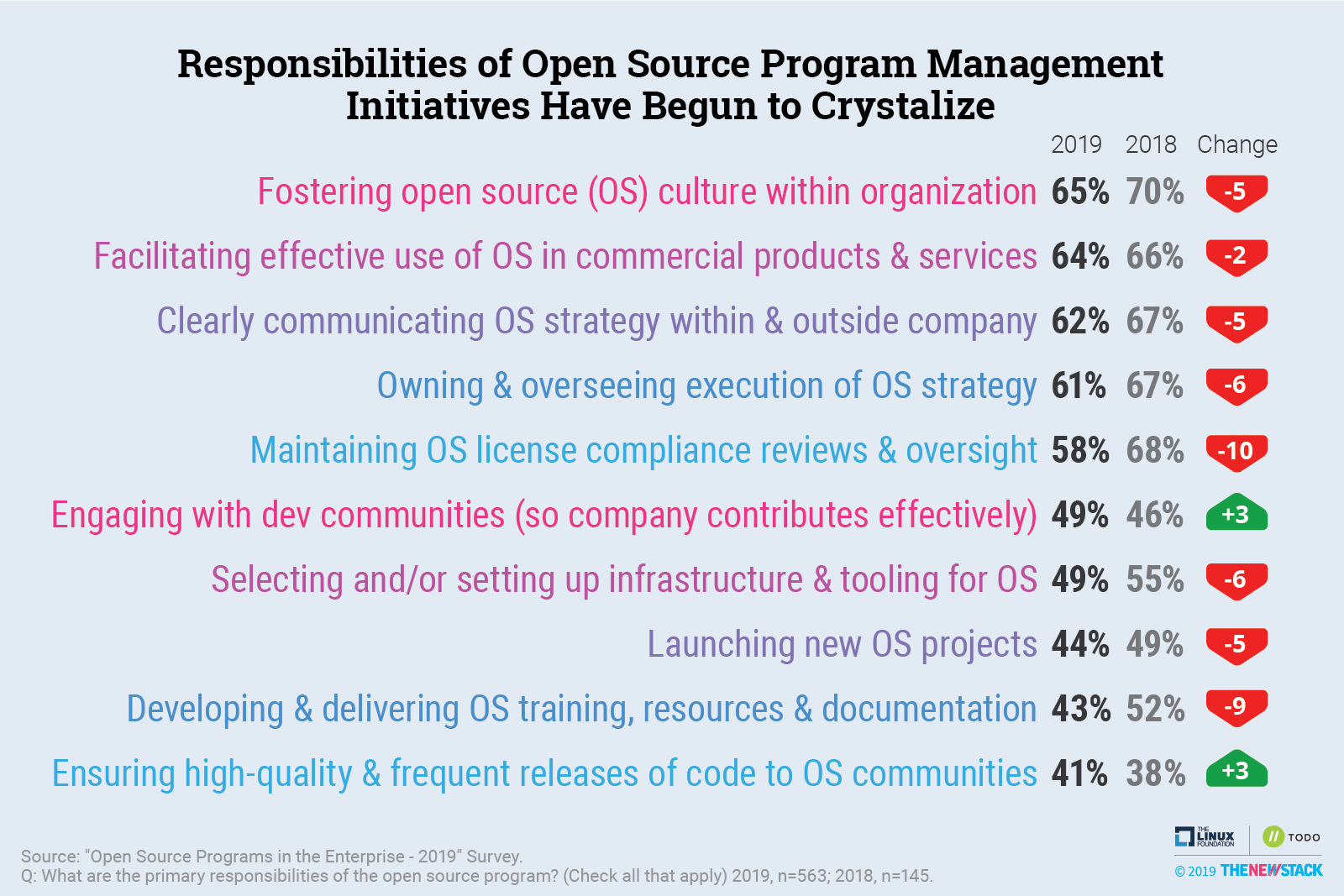 Open source programs are improving how software development is handled. In response to one of our new questions, 81% of respondents say their program has had a positive impact on their company’s software practices. In an open-ended follow-up question, code reviews and license-compliance processes were repeatedly cited as specific practices that were improved as a direct result of the program. Furthermore, code quality and reduced costs were often cited as specific benefits coming from improved software practices. 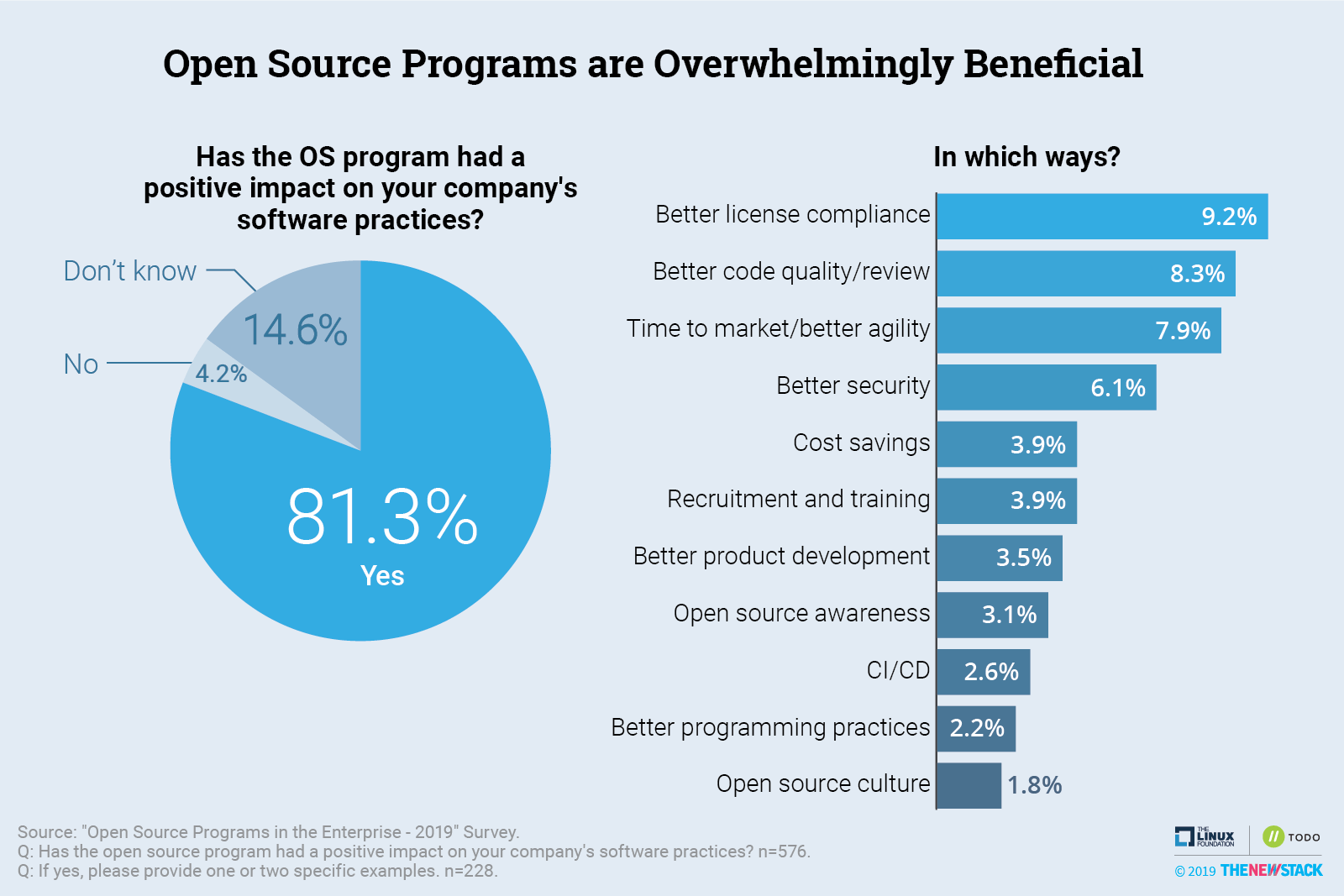 While there are many positives associated with these programs, there are also challenges. Top among them is finding and recruiting open source developers, a challenge that is becoming more difficult, with 38% seeing it as a top challenge they face, up from 32% last year. With recruitment increasingly being seen as a program benefit, so has the imperative to execute in this area.

Tool selection has also risen as a challenge even though fewer people think setting up infrastructure and tooling is a primary responsibility. This is possibly because open source programs are being asked to decide which projects the company should invest in. 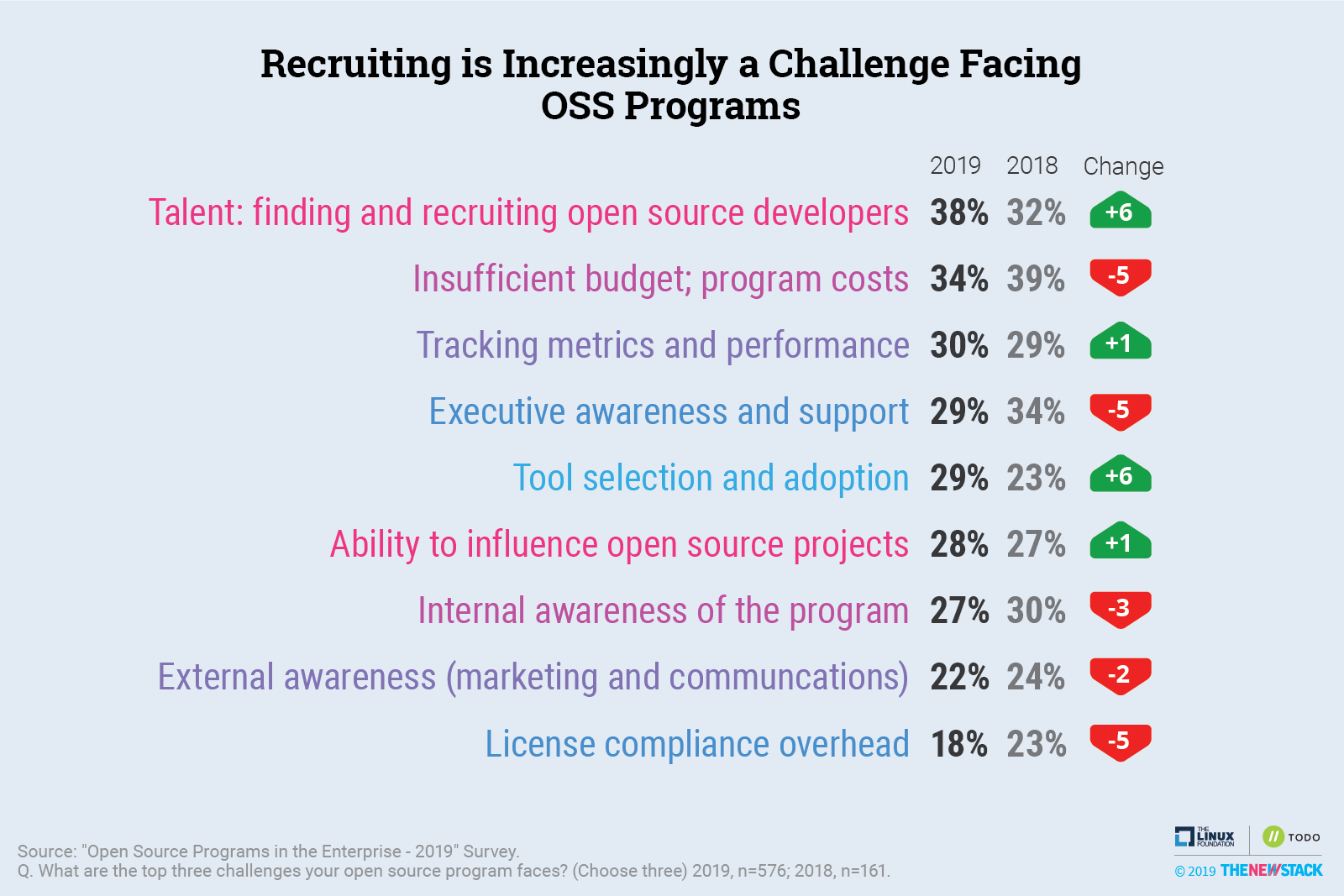 As mentioned earlier, companies with plans to create an OSS management program are increasingly hiring developers to work on open source projects. In addition, they are more likely to view developer hiring and onboarding as a way to measure success. One area where they are seeing declining expectations is time to market, with those seeing this as a good key performance indicator (KPI) for open source programs going from 32% to 20%. Those with existing programs and people planning programs have a declining expectation that development speed in and unto itself will be a benefit of open source programs. 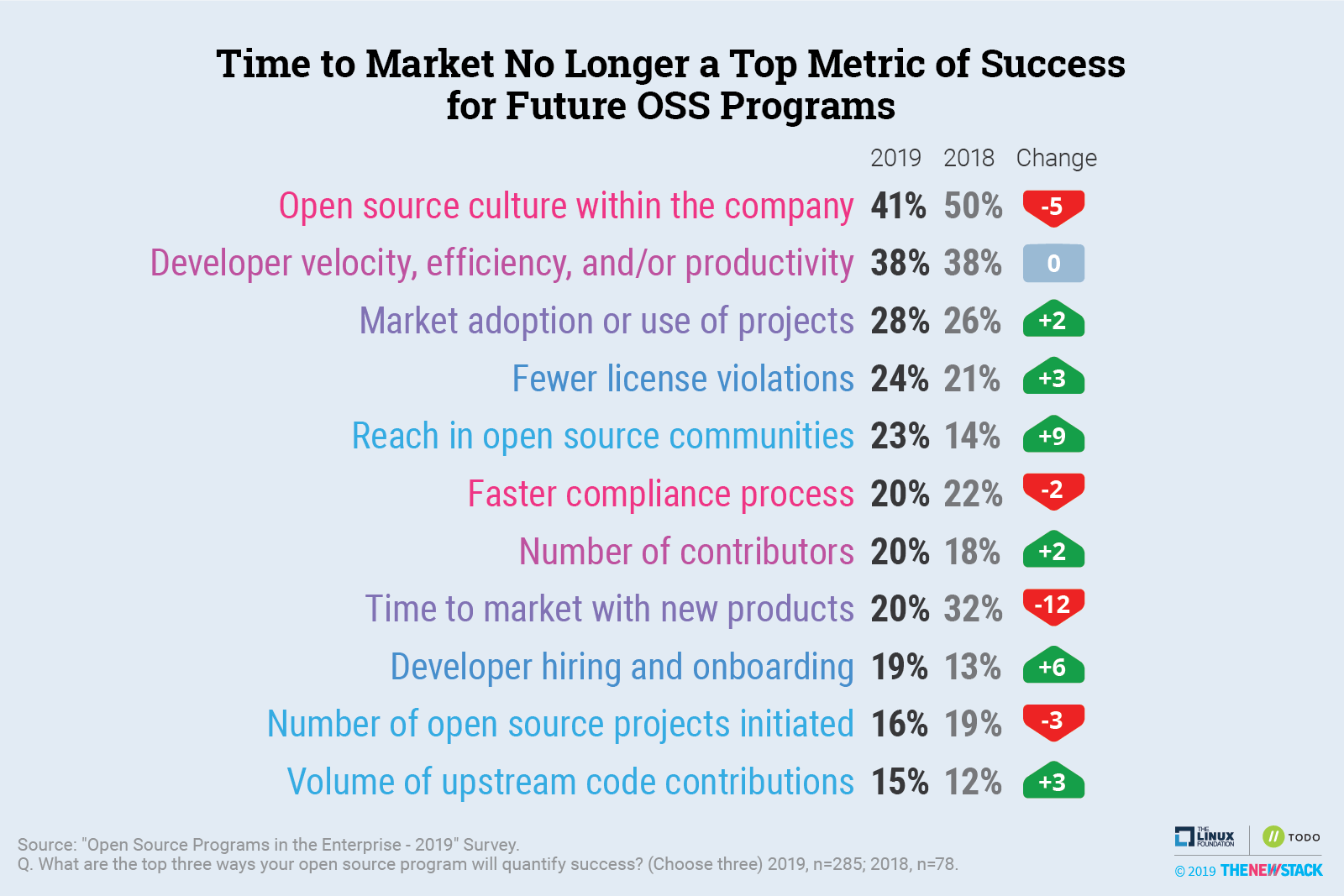 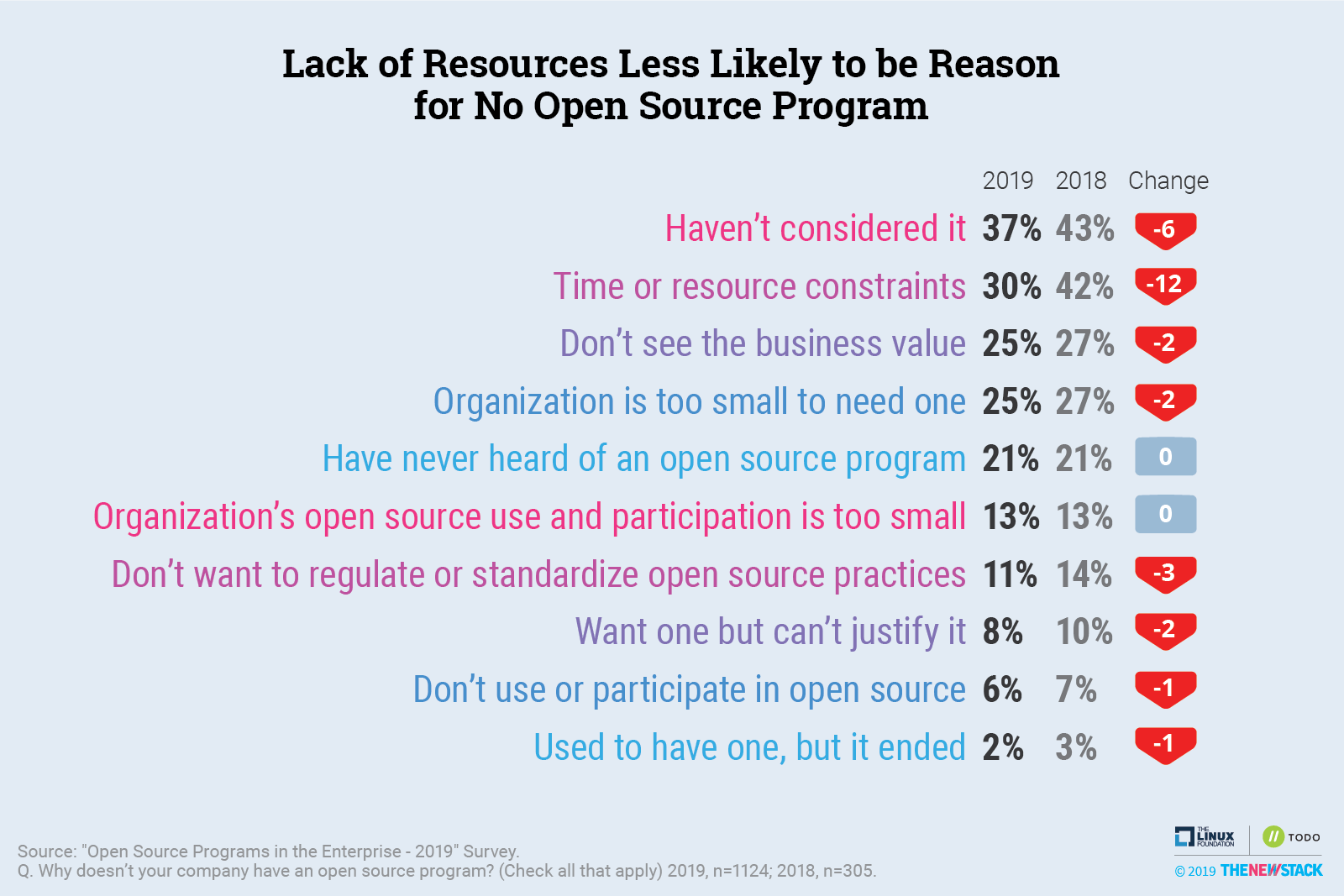 Thus, the path forward often means starting with an informal open source group, and then creating a more formal program once executive buy-in is achieved.

Views on Open Source in General

Security and software compliance are areas in which open source program offices are helping to mitigate some of the pain points associated with open source.

We expect more and more people will see code quality as an open source benefit. Forty-one percent of participants with OSS management initiatives say these programs are responsible for ensuring high quality and frequent releases to open source communities. While “quality” is often hard to define, many respondents say newly instituted code reviews have been a specific positive impact on their company’s software practices. 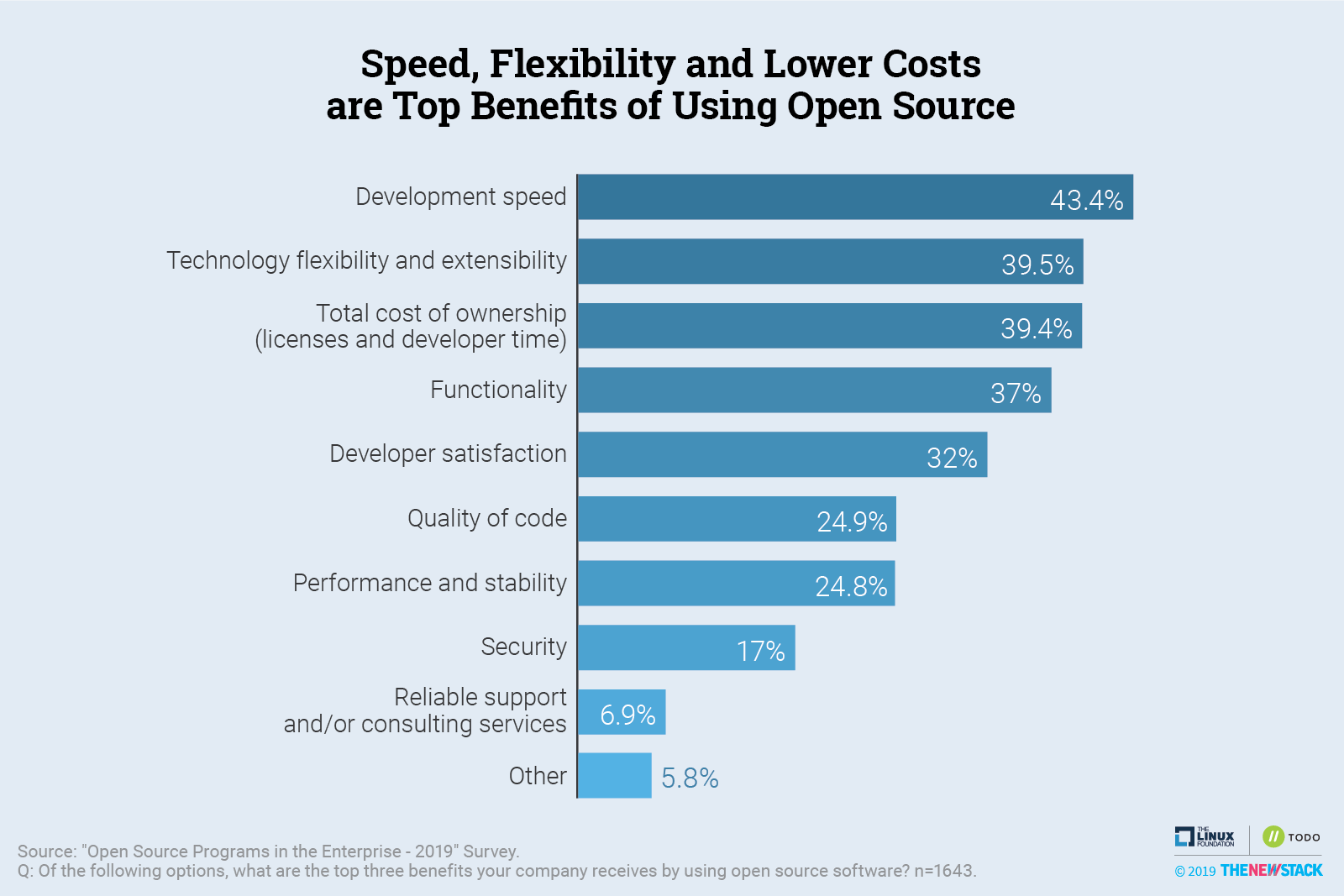 The study also asked a series of questions about open source corporate citizenship. Although pundits make big claims about how important it is to give back to the community, a majority say open source perception won’t affect business wins and losses. Specifically, 32% say a company’s participation in, and contributions to, the open source community has little to no influence on their organization’s buying decisions, while 29% say this is a very influential factor.

A forthcoming follow-up article will cover in more detail our findings on the perception of 11 companies’ open source citizenship in terms of contributions, collaboration and leadership on open source projects and initiatives within the open source ecosystem. 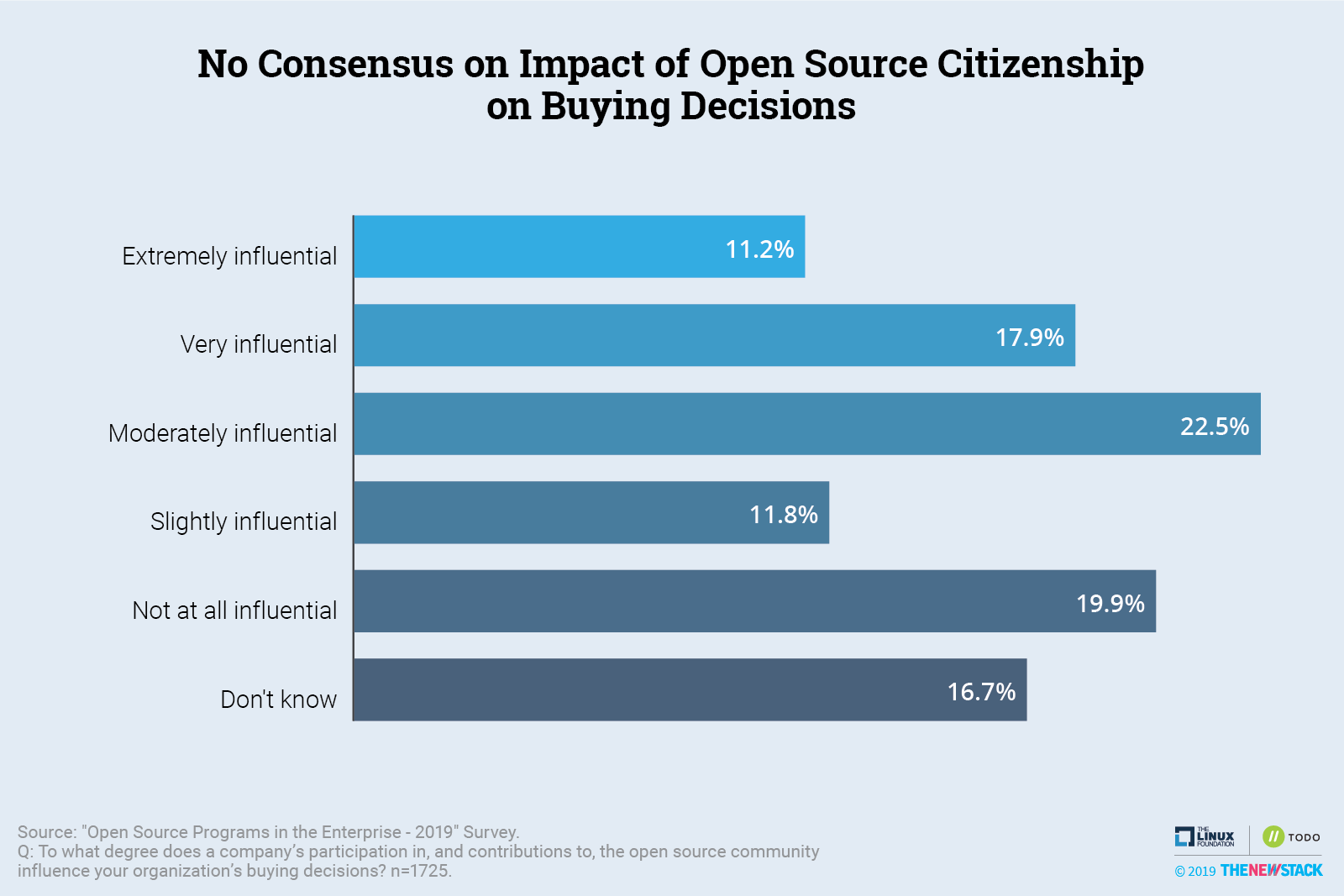 What to Look for Next

The benefits of open source software cannot be achieved overnight, but companies with initiatives to promote open source overwhelmingly say these efforts are improving their companies’ software practices. The New Stack and its partners will continue to gauge how effective these and other policies are in promoting the sustainable growth of open source projects and their unique way of doing things. Hopefully, our research will enable enterprises to justify increased contributions to a healthy community of software maintainers, contributors and end-users.

Over 2,700 responses were received, and over 1,600 completed the survey. One hundred and thirty responses were excluded because they appeared to come from the same company (based on email address, name of company or IP address). The data cleaning allows us to more confidently interpret the data as being from individual companies rather than just individual respondents.

The survey was conducted on July 8 – 29, 2019. Respondents were solicited via social media and with emails to The Linux Foundation, TODO Group, and The New Stack email lists.