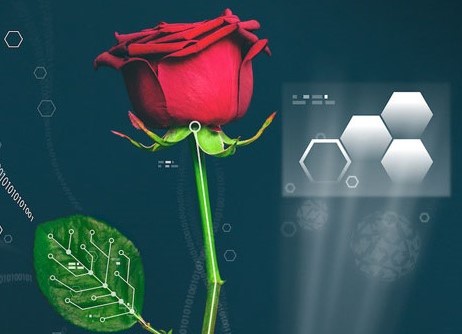 Many of us are familiar with the idea of human enhancement, whether it’s through mechanical add-ons, neurotech wearables, or the bio-printing of engineered tissues. Ethical debates aside, it seems that the convergence of biology and technology is fast approaching, whether we like it or not. If humans seem like fair game for cutting-edge improvements, then why not plants too?

That’s what Swedish researchers at the Laboratory for Organic Electronics of Linköping University have done in a recent experiment where they successfully ‘rewired’ a living rose plant by ‘growing’ fully functioning electronic circuits within the plant itself. The result is an electronic plant (or “e-plant”) that has an electronic wire grown right in the middle of it, and which can change the hue of its leaves when an electrical current is run through it.

Recently published in Science Advances, the study appears to be a breakthrough of sorts, creating a new kind of plant cyborg. “As far as we know, there are no previously published research results regarding electronics produced in plants. No one’s done this before,” says Magnus Berggren, lead study author and a professor of organic electronics at Linköping University. 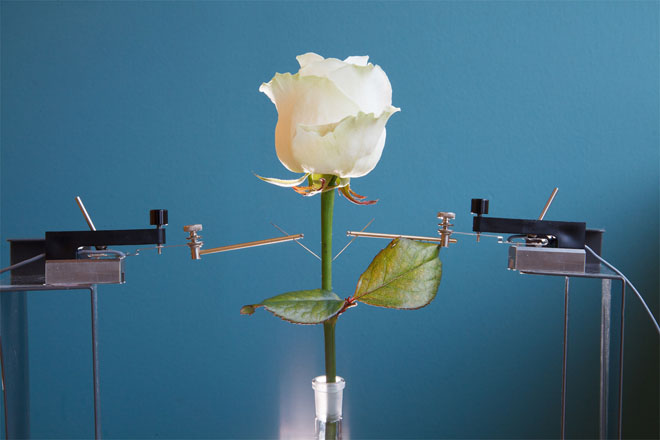 Of course, it wasn’t as easy as inserting a pre-made wire into the rose plant. The team worked with the natural systems of the plant to explore how a hybrid of living plant and electronic circuitry might form, focusing in particular on the xylem, or vascular tissues that have channel-like structures carrying water and nutrients throughout the entire organism.

Scientists began by dissolving various semi-conductive polymers in water, then introducing cut rose stems, to see how well the plants’ tissues would absorb them and react. In all, they tested over a dozen polymers, all of them producing toxic reactions or clogging the xylem in the plants.

Eventually, the researchers finally found something that worked: a liquid solution featuring a polymer called poly(3,4-ethylenedioxythiophene), or PEDOT for short. When they put the rose plant stem into this solution, they discovered that it was easily absorbed and diffused throughout the plant tissues.

Over time, this solution solidifies into something approximating a “xylem wire” that can conduct electricity, but yet still allow the plant to carry on with essential life functions like ferrying water and nutrients. With PEDOT, the researchers were able to grow a “xylem wire” about 10 centimeters (3.9 inches) long.

By placing electrodes at either end of this xylem wire, and setting up a logic gate in the middle, the researchers created a kind of “organic electrochemical transistor” or electronic switch within the plant, fuelled by its own internal electrolytes. Transistors are a fundamental component to modern electronic devices, while logic gates play an essential part in computing systems.

The team also discovered that the plants’ leaves could be rigged to perform as a dimmable electronic element. to infuse another modified PEDOT solution with nanocellulose into the leaves’ stomata, small pores which aid the plant in exchanging gasses with its environment. The nanocellulose helps to create a spongy formwork within the leaves, which is then filled in with the polymer, thus creating electrochemical cells or “pixels” of sorts. These pixels are capable of changing to noticeably lighter or darker colors when electricity is run through the system.

These experiments are just the beginning of a potentially vast new area of study which harnesses the evolutionary complexity and creative genius of nature itself. “Now we can really start talking about ‘power plants’ — we can place sensors in plants and use the energy formed in the chlorophyll, produce green antennas or produce new materials,” explains Berggren. “Everything occurs naturally, and we use the plants’ own very advanced, unique systems.” 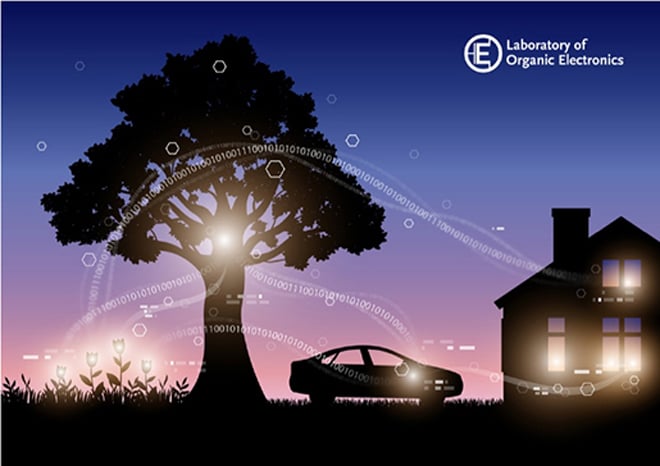 Besides smaller plants, scientists believe that this approach could be applied to larger organisms like trees. In any case, the combination of natural plant biology with electronics could have enormous implications. Perhaps our humble houseplants or staple food crops could someday be connected to the growing Internet of Things — alerting us via an app exactly when maintenance is needed, maximizing growth without the need for modifying genetics.

Developing these bioelectronic circuits further, humans might also find ways to harvest the energy produced by plant photosynthesis, creating another form of clean energy. For all we know, computer systems or even neural nets could be expressed in a plant-based version someday, opening the door to the possibility of artificial plant intelligence. While that’s probably a stretch for now, these experiments ultimately prove that living plants can be enhanced by technology just as much as humans.

Read more over at IEE Spectrum and Linköping University.