Researchers Are Developing Robots That Can Feel Your Pain 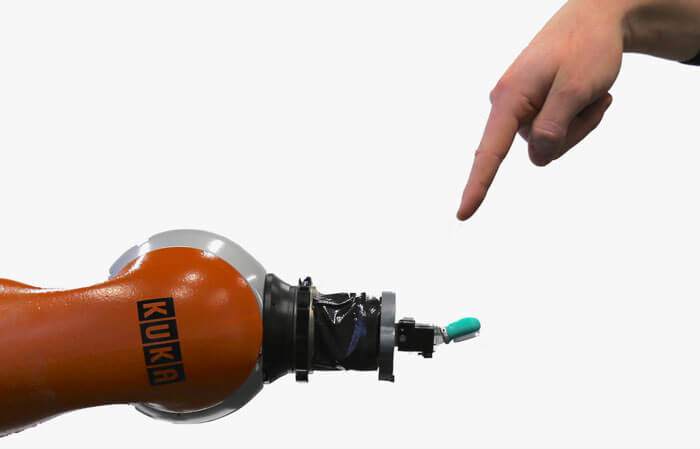 Let’s face it, pain sucks. Whether you’ve stubbed your toe or touched a hot stove accidentally, the resulting hurt is not a pleasant thing to feel. But our innate ability to feel pain, and to instinctively pull away from the very thing that is causing us that pain, is what protects us from further injury.

But can this ability to feel pain be something that could protect robots as well? Well, two German researchers from the Leibniz University of Hannover believe that pain (or at least an artificial simulation of it) would be invaluable for robots, especially for collaborative robots that would be working side-by-side with humans. The pair is developing what they call an “artificial robot nervous system to teach robots how to feel pain” — or more accurately, an “artificial Robot Nervous System (aRNS)” — which would alert robots to potential dangers, allowing them to react in time to avoid damaging their mechanical or electronic systems.

Presenting their paper earlier this month at the IEEE International Conference on Robotics and Automation (ICRA) in Stockholm, Sweden, researcher Johannes Kuehn and Professor Sami Haddadin described their prototype, which features a KUKA LWR4+ robot arm outfitted with a tactile fingertip sensor, which can detect changes in temperature and pressure. During the experiments, the robot arm then underwent physical and simulated collisions to test its responses. Watch it in action in this video via IEEE Spectrum:

Of course, pain is subjective and not easy to define. The so-called ‘pain’ that a robot would feel would differ from the biological sense of the word, the researchers explain: “A robot needs to be able to detect and classify unforeseen physical states and disturbances, rate the potential damage they may cause to it, and initiate appropriate countermeasures, i.e., reflexes,” they write. “In order to tackle this demanding requirement, the human antitype shall serve as our inspiration, meaning that human pain-reflex movements are used for designing according to robot pain sensation models and reaction controls. We focus on the formalization of robot pain, based on insights from human pain research, as an interpretation of tactile sensation.”

This artificial robot nervous system for “tactile sensation” could be similar to the network of sensory neurons embedded in human skin, capable of feeling force, pressure and temperature. If any external stimuli go over a pre-programmed threshold, it is then classified into different categories, prior to activating a suitable response.

“In the [light] pain class, such contacts occur that may harm the robot or prevent it from performing the task. The robot ‘feels’ uncomfortable and shall smoothly retract until the contact even is over and return thereafter,” explain the researchers. “Strong collisions are covered in the [moderate] pain class. The robot ‘feels’ moderate pain, shall quickly retract, and more distant until the contact event is over. Then, it may move back. The [severe] pain class covers all contacts in which the robot may be damaged and thus needs some sort of ‘help’. In order to prevent making the damage worse, the robot switches to gravity compensation with additional damping for dissipation, improving the safety of the robot and the environment by its strictly passive behavior.”

With the emergence of machines that can read and react to emotions, service robots that run hotels and hospitals, and growing numbers of collaborative robots appearing in the workplace, it makes sense to design robots with the capacity to react appropriately to harmful stimuli. It’s an extra safety precaution that robots can be equipped with, on top of a myriad of other sensors, for instance, ones that would cause them to stop or slow down when the presence of a human is detected.

As these biologically inspired robotic mechanisms would be designed to protect robots from harm, by extension they could also forestall serious and costly repairs, or prevent workplace accidents that may unexpectedly happen if the robot’s equipment were to be damaged out of sight or in proximity to humans. Ultimately, robots that feel their own version of pain might very well be a good thing in this dawning robot era that will see more automation in our factories and warehouses, and even in our supermarkets, offices and homes.

Read the paper; more over at IEEE Spectrum.