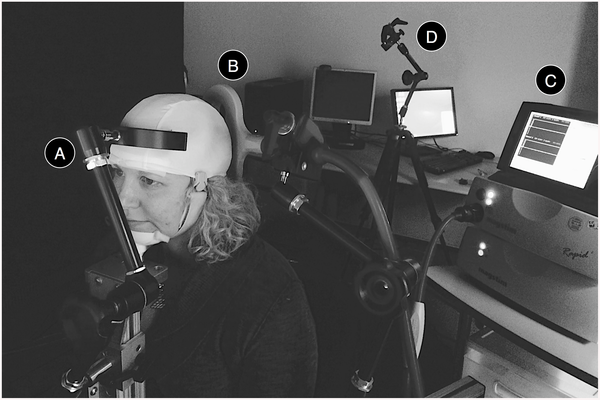 Communication between humans typically consists of gestures and a diversity of meaningful sounds made by our mouths. But what if there were some way to connect brains directly over the Internet so that they could communicate with one another?

It may sound like something straight out of a science fiction film, but that’s what scientists at the University of Washington believe they have achieved. In what they are calling the most “complex brain-to-brain experiment … that’s been done to date in humans,” the experiment involved pairs of individuals playing a series of question-and-answer games over what is termed a brain-to-brain interface (BBI), producing some surprising results.

The study, which was recently published in PLOS One, details how the experiment was set up. The first person, or “respondent,” dons a cap connected to an electroencephalography (EEG) machine, which records the electrical impulses of brain activity. The respondent then is presented with an object (e.g., “shark” or “dog”) on a screen. The second person, or “inquirer,” whose occipital lobe receives signals from a transcranial magnetic stimulation (TMS) coil placed near the head,  is then presented with a list of possible objects and related questions that would help him or her guess the true nature of what the respondent has seen.

The inquirer touches a screen to choose questions to ask the respondent, who answers “yes” or “no” by focusing on one of two LED lights on either side of their monitor, which flash at different rates. This electrical impulse of “yes” or “no” is sent over the Internet to the inquirer via the TMS coil, but only a “yes” answer will produce a signal to stimulate the inquirer’s visual cortex, creating a visual flash in their visual field called a phosphene. These flashes help the inquirer determine the correct object in question — it’s basically the game of Twenty Questions, but played in a direct brain-to-brain connection over the Internet.

While both EEG and TMS technologies are nothing new, the key here is the innovative use of phosphenes, explains the study: “Because phosphenes are private to the receiver and can be perceived under a variety of conditions, or even while performing other actions, they represent a more versatile and interesting means of transferring information than [previous brain-to-brain interfaces].”

The experiment builds upon previous experiments on brain-to-brain interfaces done with animals, and brain-computer interfaces to activate devices, as well as the team’s 2013 experiment that allowed a person to control another person’s hand movements over the Internet.

Done without any invasive surgery into the cranium, this is the most complex direct brain-to-brain experiment of its kind, explains Andrea Stocco, lead author and an assistant professor of psychology at UW’s Institute for Learning & Brain Sciences: “[The experiment] uses conscious experiences through signals that are experienced visually, and it requires two people to collaborate.” 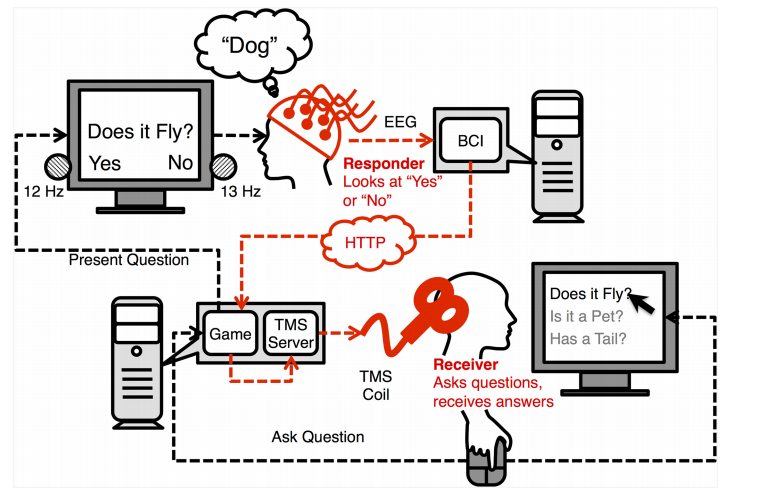 To ensure that test subjects were relying only on direct brain-to-brain communication, the scientists put the respondents and inquirers in darkened rooms almost a mile apart. The visual stimulations for “yes” and “no” had randomly varying intensities from game to game, and inquirers had to wear earplugs so they could not make guesses based on the different sounds of the visual stimulation intensities. There games were designed so that sessions with the test group were mixed up with those of the control group, and only the researcher knew which session was which.

The results were startling: subjects in the test group were able to score 72 percent of correct answers, while the control group only scored 18 percent. 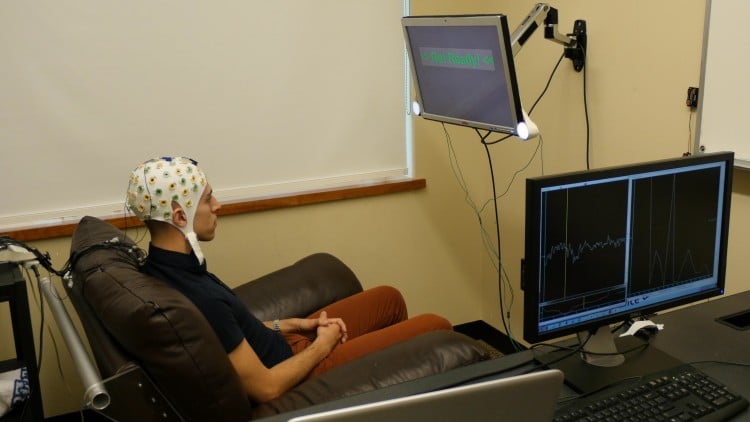 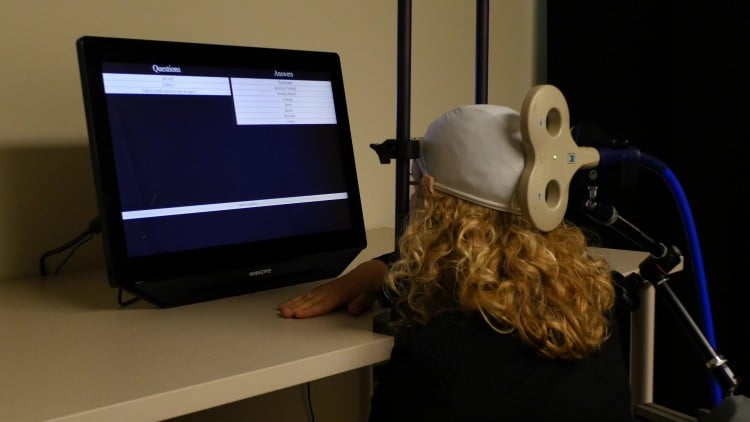 While being able to send signals from your brain to another person’s brain is mind-blowing in and of itself, the researchers envision even more potentially intriguing applications for this emerging technology. For one, they’re looking into what they are calling “brain tutoring” — a direct brain-to-brain treatment to help persons with developmental problems, or who have accident-related brain damage, where the neural patterns or “brain state” of a healthy person is transferred over to the patient. Knowledge and information could also be directly transferred from person to person, much like a Vulcan mind-meld.

Co-author and UW associate professor of psychology Chantel Prat puts it this way:

“Imagine having someone with ADHD and a neurotypical student. When the non-ADHD student is paying attention, the ADHD student’s brain gets put into a state of greater attention automatically.”

The team’s findings take a different approach to facilitating direct communication between minds, without the use of some in-between medium that may result in something being lost in process. While this is not some paranormal, endogenous telepathy by any stretch, it’s in step with the trend of “casual, unobtrusive technology” that would be invisibly and seamlessly embedded into our lives and possibly our bodies, offering a level of communication previously not possible. The near-instantaneous connection offered by social media is incredible, but imagine someday being able to communicate to many other individuals directly, via your brain, thanks to some yet-unrealized gadget that might be a wearable, or an implant.

This experiment is but one small movement toward that potential future, explains Stocco: “Evolution has spent a colossal amount of time to find ways for us and other animals to take information out of our brains and communicate it to other animals in the forms of behavior, speech and so on. But it requires a translation. We can only communicate part of whatever our brain processes. What we are doing is kind of reversing the process a step at a time by opening up this box and taking signals from the brain and with minimal translation, putting them back in another person’s brain.”

Images via University of Washington.