Discovered in the remains of a 2,000-year-old shipwreck, the Antikythera Mechanism been described as "the most sophisticated mechanism known from the ancient world. Nothing as complex is known for the next thousand years." New researchers believe they've finally recreated what's often considered the world's oldest computer.
Mar 21st, 2021 6:00am by David Cassel 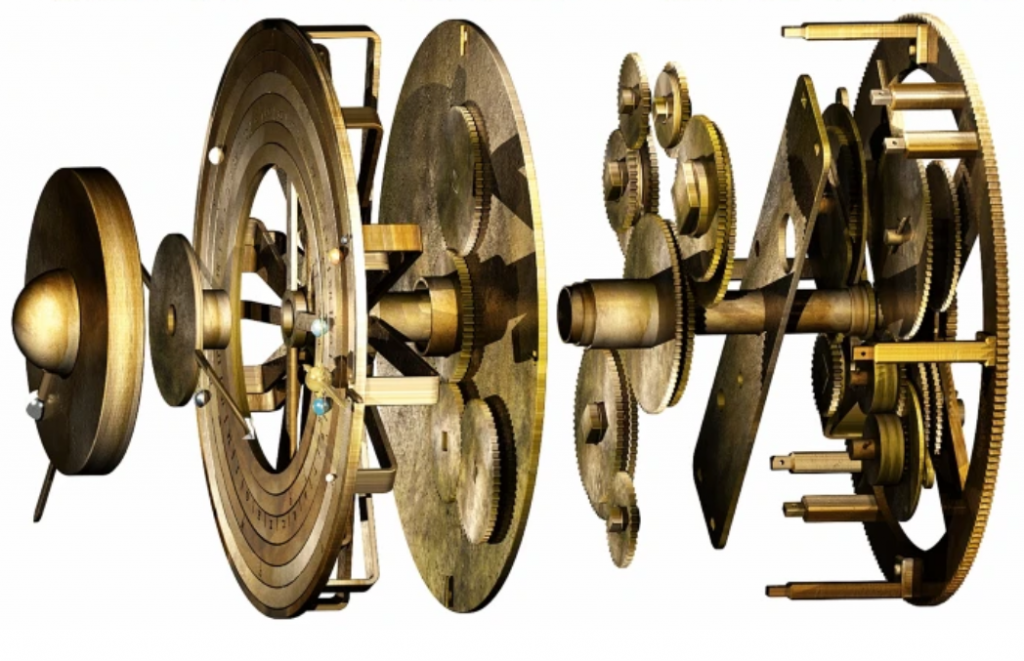 Researchers believe they’ve finally recreated what’s often considered the world’s oldest computer. Discovered in the remains of a 2,000-year-old shipwreck, the Antikythera Mechanism been described as “the most sophisticated mechanism known from the ancient world. Nothing as complex is known for the next thousand years.”

“Now split into 82 fragments, only a third of the original survives,” explains a recent article, “including 30 corroded bronze gearwheels.”

In a triumph of modern-day technology, researchers at University College London believe they’ve deduced and deciphered how the original machine performed its computations — and determined all of its corresponding mechanical parts. And to match this virtual version, they’re now building a physical model to show their discovery to the world.

A video uploaded by the team to Vimeo calls it “a fiendishly complex, 3D jigsaw puzzle — and scientists have been struggling for more than a century to put it all back together.”

They describe it as “by far the most complex piece of engineering from the ancient world.” 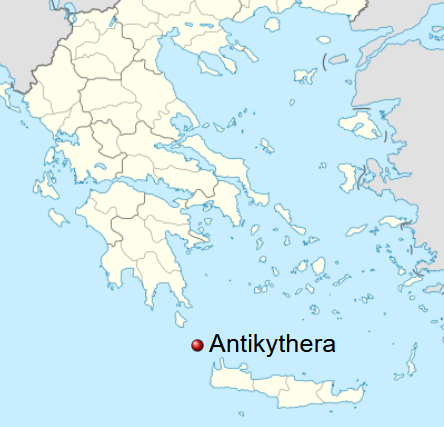 First discovered in 1901, the find baffled archaeologists. A clue came in the 1950s, when the first X-rays were performed — revealing 30 intermeshing gears. Then in 2005, researchers had tried using more sophisticated high-resolution X-rays on the fragments, using a computer-assisted technique called Microfocus X-ray Computed Tomography (X-ray CT). And deep within the fragments, “We could see new text characters — many thousands of new text characters,” mechanical engineer Tony Freeth says in the video. There were characters that had gone unread for more than 2,000 years — only to be rediscovered.

What’s left of the inscription on the front cover lists the years in the orbits of planets relative to the sun. But there was another great moment of historical detection. While the back cover is lost, some of its inscriptions was inadvertently preserved by the impression it made on an adjacent fragment.

“You can just make out some text, but it is in mirror writing,” the video explained. 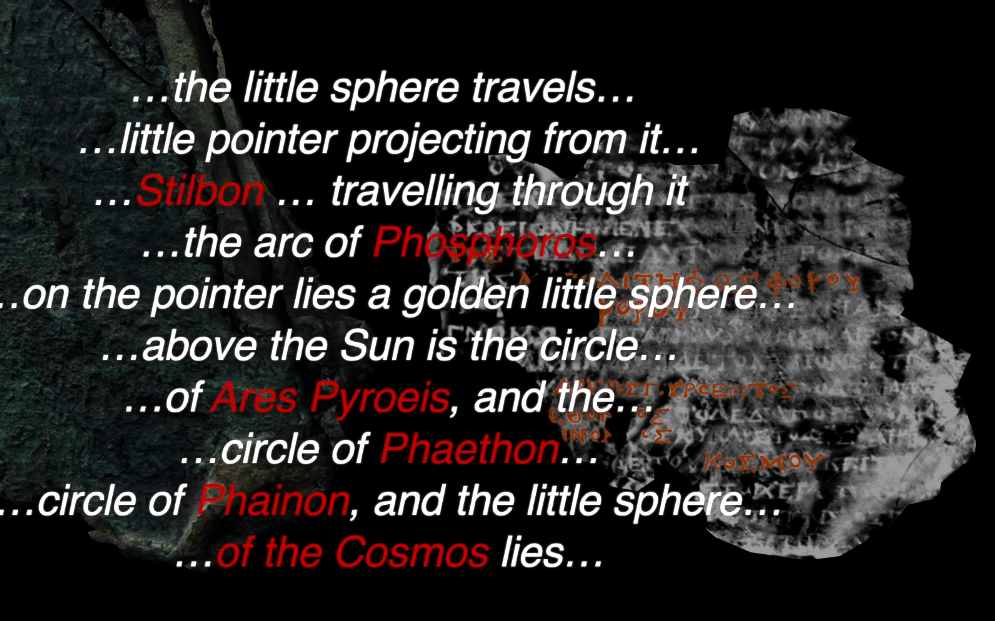 The back cover’s inscription had actually described all five of the known planets at that time being displayed in a ring system — every planet known at this point in history — as well as the sun and moon. At one point the video describes this inscription as a “user manual,” suggesting it provided the numbers that could be used for pulling up various alignments of the planets — and allowing ancient Greeks to calculate the days between celestial events.

But could the researchers prove that?

With what was already known about the device, there wasn’t much space left for any additional gears. For a device like this, it seems that the design would be based on the number of orbits around the sun that planets complete within a certain number of years. Unfortunately, their researchers’ paper points out, an accurate number for Venus would’ve been 720 orbits every 1151 years — “requiring a gear with 1151 teeth.” (Since 1151 is a prime number, there’d be no way to achieve the same result with anything smaller.)

But then in 2016 researchers made a crucial discovery: two more numbers in the remaining text of the front cover inscription. The number 462 appeared in the Venus section and 442 in the Saturn section. So their new paper finally proposes a theory as to how the ancient astronomers came up with these numbers instead — and then uses that theory to also calculate the missing numbers for the device’s other three planets.

The short answer: they were relatively accurate approximations — and also allowed for the simplest gear design. Because significantly, the missing second number that the researchers postulated for the Venus section shared a factor of 17 with the equivalent numbers for Mercury, which, the researchers note, makes those numbers “suitable for use in a shared-gear design” (specifically, “a single fixed 51-tooth gear” for both Mercury and Venus). Similarly, the patterns for Mars and Jupiter share a factor of seven with Saturn, allowing a 56-toothed gear to handle three planets, and “leading to very economical designs… Without these compact systems that can all be mounted on the same plate, it would have been impossible to fit the gearing into the available spaces.”

So this new theory about the calculations modeled by the device also offered clues about how it was built. They also counted the teeth on the surviving gears and examined the discs riveted to them which control the position of the plates. Enough of the device had survived to indicate how the moon’s position and phase was displayed and calculated — but “for the Sun and planets, we need to develop theoretical mechanisms.”

But ultimately: they did it. Their paper says they’ve come up with “new theoretical planetary mechanisms,” and provides all the technical details. To the 35 surviving gears, they surmise 34 additional gears (for a total of 69), with the prime-number factors of those years per orbit (suggested by the inscriptions) determining how the gears would all fit together. 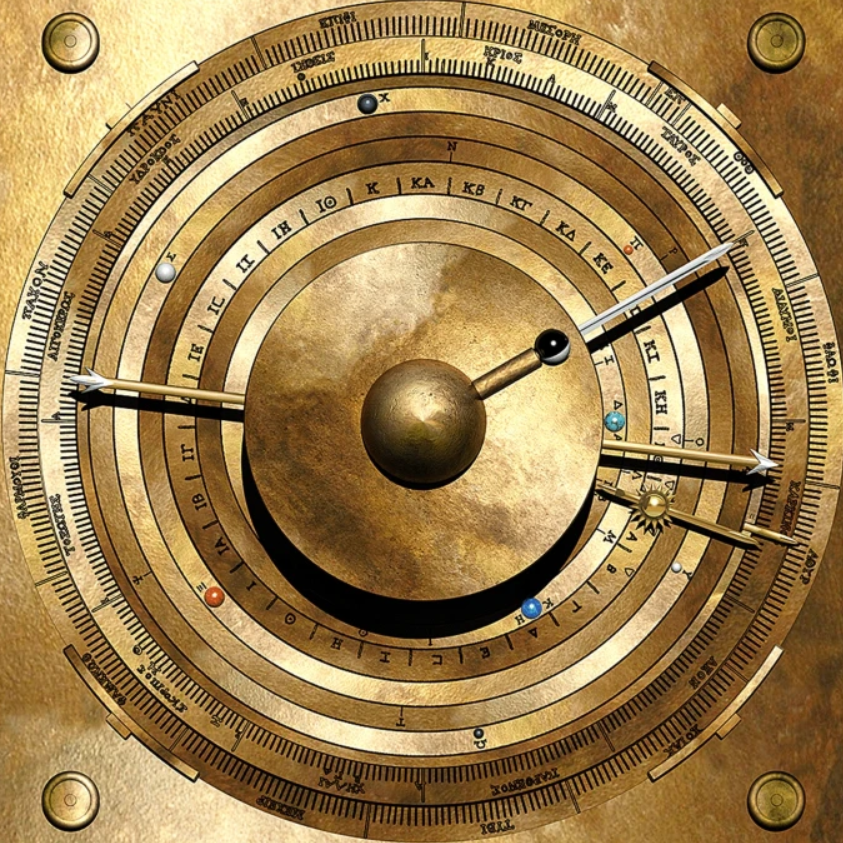 And of course, their paper includes proof that the mechanisms do in fact produce the expected results. They’re hailing it as the very first time that all the known features and components have been explained. And they’ve also created a gold-colored computer model of the end result: “an elegant ancient Greek mechanical Cosmos” where “The planets are identified by semi-precious stones on planetary rings.” The moon’s phase is even indicated with a small, black and white sphere that rotates in a hole. 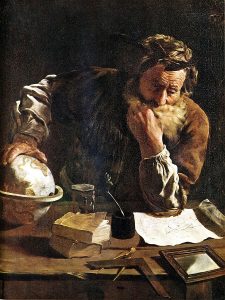 For further corroboration, they note that the ancient Greek mathematicians Archimedes is known to have built similar devices predicting the movements of the moon and planets. “It’s not complicated mathematics. It’s simple arithmetic, and it’s simple geometry,” Freeth says in the video, “but put together in an absolutely beautiful way.”

The mechanism also holds a very special place within the larger history of technology. “It is the first known device that mechanized the predictions of scientific theories,” the paper concludes. And since these intervals would’ve been difficult to calculate any other, the paper also suggests another intriguing possibility: that the device “could have automated many of the calculations needed for its own design.” This would make it a unique milestone in technology’s march into civilization: “the first steps to the mechanization of mathematics and science.”

“Our work reveals the Antikythera Mechanism as a beautiful conception, translated by superb engineering into a device of genius.”

And in addition, “It challenges all our preconceptions about the technological capabilities of the ancient Greeks,” the video states.