A group of German researchers from Ludwig Maximilian University of Munich and the University of the Saarland have set a new record in sending quantum information on a fiber optic cable stretching over a distance of 20 kilometers. With the previous record set only at 700 meters, this new benchmark could mean that secure quantum networks — connecting the separate quantum computers of the world — might not be too far off in the horizon.
Feb 28th, 2020 12:00pm by Kimberley Mok 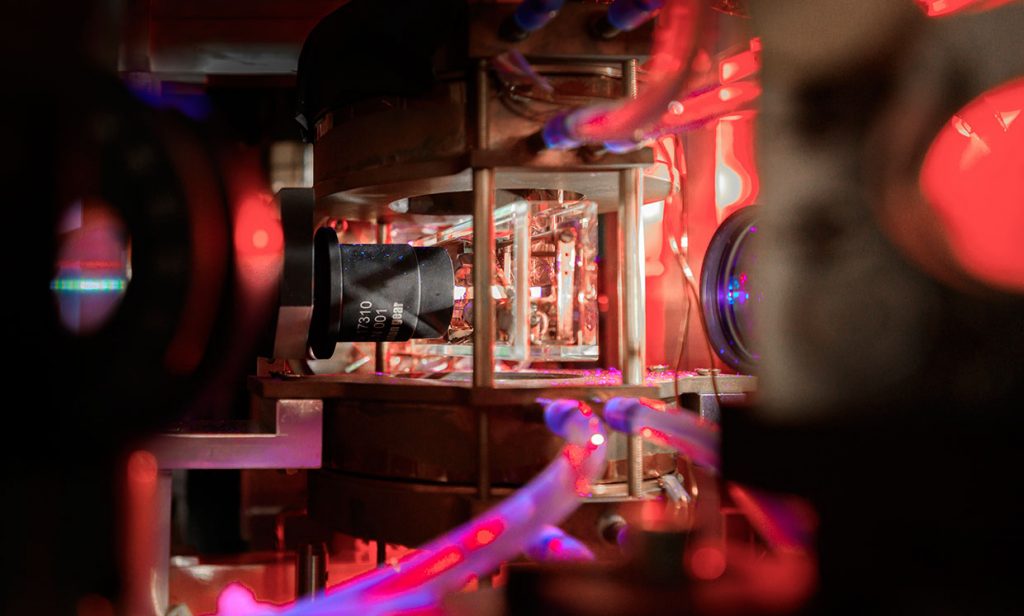 Thanks to an increase in cybercrime and massive data breaches, experts are now working to build un-hackable quantum networks, which are capable of securely receiving, sending, storing, and processing bits of quantum information that are carried on single photons of light. In theory, these networks are considered virtually un-hackable because these single light particles would be irrevocably transformed or destroyed if an unauthorized third party were to access the information. But in reality, these quantum systems still have some kinks to work out — such as finding a way to reliably send photons over long distances without any loss of information.

Now, the hope of building a reliable and un-hackable quantum Internet is one step closer, thanks to a group of German researchers from Ludwig Maximilian University of Munich and the University of the Saarland, who have set a new record in sending quantum information on a fiber optic cable stretching over a distance of 20 kilometers. With the previous record set only at 700 meters, this new benchmark could mean that secure quantum networks — connecting the separate quantum computers of the world — might not be too far off in the horizon.

To accomplish this, the researchers had to work with a property in quantum mechanics known as entanglement, which occurs when a pair of particles are linked via an indeterminate but correlated quantum state. Bizarrely, the state of one particle will depend on the other, meaning that acting upon one particle will result in changes in the state of its twinned particle, even though they are located relatively far apart, which goes against everything that classical mechanics tells us is possible.

Not surprisingly, many experts have experimented with different methods of exploiting quantum entanglement in order to create quantum networks. The team’s published paper in Physical Review Letters describes how they were able to exploit quantum entanglement and create a quantum channel linking up two nodes of a quantum system, by using a single photon as an information carrier, and a single trapped rubidium atom. To carry quantum information, the photon needs to be “entangled” with the internal state of the atom, through a process known as polarization.

“Such an entangled atom-photon state can be routinely produced nowadays, but there is a problem with the photon: if we look at networks based on optical fibers, photons are only prime carriers of information if their wavelength is within a low-loss telecommunication window — typically around 1500 nanometers,” said Christoph Becher, professor of experimental physics at Germany’s Saarland University and one of the co-authors of the study.

To address this discrepancy in wavelengths, the team developed their version of what is known as a quantum frequency converter (QFC), which changes the wavelength of photons so that quantum entanglement can be maintained over longer distances without significant signal loss. The team first captured rubidium atoms in a laser atom trap, then cooled them to near-absolute zero temperatures.

Diagram of experimental set-up, showing how quantum entanglement is generated and observed.

One individual atom was then selected from the bunch by using a highly focused laser beam (a technique known as using “optical tweezers“) and is then bombarded with short laser pulses in order to “excite” it, pushing it up to two adjacent energy states, which can be described as both “spin-up” and “spin-down” forms of that excited state. The excited atom emits a photon and then, during the process of atomic decay, the atomic spin state becomes entangled with the polarization state of the emitted photon. This polarized photon is then trapped and its wavelength converted from 780 nanometers to 1522 nanometers, which is more compatible for telecommunications applications, as it permits the photon to zoom along 20 kilometers (12 miles) of fiber-optic cable without a reduction in signal strength while retaining 78% of quantum entanglement.

“Quantum states are very fragile and it’s difficult to keep them ‘alive’ for long enough to accommodate for the travel time of a photon over 20 kilometers,” explained Becher. “Any loss of photons in the experiment blows up the time you need to run the experiment in order to verify that the quantum state is really an entangled one. Every photon counts! [So] the distance of 20 kilometers is a huge step for the rubidium-atom platform and is on par with recent experiments using trapped ions or atomic ensembles.”

The team has now demonstrated that it is possible to establish a quantum channel capable of sending information in one direction. Next, it plans to develop a way so that information flows in both directions, creating a “quantum segment” capable of maintaining node-to-node entanglement — another crucial step toward building quantum repeaters that will efficiently distribute entangled states over long-range quantum networks.

SHARE THIS STORY
RELATED STORIES
CyberArk Decreases Cognitive Load with Platform Engineering The Top 4 Threats to Securing Your Cloud Infrastructure What Data Management Pros Expect to See in 2023 Can C++ Be Saved? Bjarne Stroustrup on Ensuring Memory Safety Azure Went Dark
SHARE THIS STORY
RELATED STORIES
4 Cloud Security Considerations for Financial Services Firms OpenSSF Aimed to Stem Open Source Security Problems in 2022 5 Security Principles to Guide Your DevSecOps Journey How to Get Started Filling 3.4 Million Cybersecurity Jobs 3 Principles for Building Secure Serverless Functions
THE NEW STACK UPDATE A newsletter digest of the week’s most important stories & analyses.
The New stack does not sell your information or share it with unaffiliated third parties. By continuing, you agree to our Terms of Use and Privacy Policy.