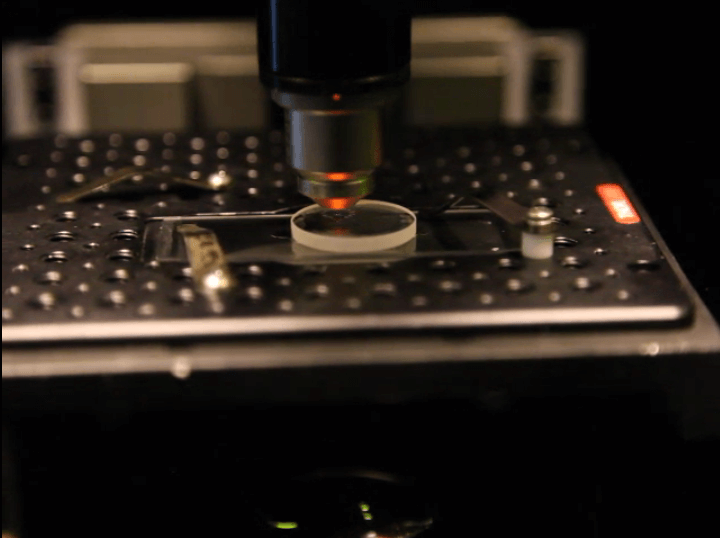 Even better than its jumbo capacity, however, is its tenacity.  At room temperature, the discs are expected to last 13.8 billion years, which is more than three times the age of the Earth. Plus, it can withstand heat up to 1,800 degrees Fahrenheit (1,000 degrees Celsius).

Back in 2013, the team’s leader explained that “We are developing a very stable and safe form of [high-density] portable memory using glass,” noting it could be “highly useful for organizations with big archives.” Their latest research was presented last week in San Francisco at The International Society for Optical Engineering’s Photonic West Conference.

The specs sound like technology from a science fiction story. Using something called an ultrafast laser, the researchers wrote data onto fused quartz, which has a much higher melting point than regular glass.

In past experiments, the laser split into 256 smaller beams, with each laser-imprinted spot storing 3 bits of information. The dots effect how light passes through the glass in a way that can be read using an optical microscope and a polariser, described as similar to the effect of sunglasses. It’s considered five-dimensional data storage because information is represented by the values in three dimensions, as well as the orientation of the data, and the strength of the light.

“Thrilling,” is how one of the group’s professor’s described the innovation. “This technology can secure the last evidence of our civilization: all we’ve learned will not be forgotten.”

For that reason, they’re calling it “the Superman memory crystal,” and they’ve already saved copies of the bible and the Magna Carta they believe could outlive the human race. “We can encode anything,” one of the project’s graduate students told The Verge. “We have the ability to store the culture, language, and essence of the human race in a simple piece of glass. For future civilizations — or whatever else is out there.”

Their next step? Commercialization of course, which involves locating industry partners, and developing their technology for everyday use. Even back in 2013, the team was writing in a report (PDF) that “We experimentally demonstrated the recording and read-out processes of 5D optical data by femtosecond laser writing.”

“This demonstration is a crucial step towards commercialization of ultrafast laser based optical data storage.”

SHARE THIS STORY
RELATED STORIES
Snack Stack: Turning Winter Comfort Food up to 11 CES 2023: Robots, Astronauts, Schwarzenegger and Flying Cars It Happened to Me: How I Suddenly Owed AWS $13,000... Watch Out, Attackers Have Their Heads in Your Cloud! Golden Paths Start with a Shift Left
SHARE THIS STORY
RELATED STORIES
Golden Paths Start with a Shift Left Entrepreneurship for Engineers: Avoiding Feature Bloat Why Your Code Sucks: Common Excuses for Bad Programming Wellspring of Creativity: Why Public Domain Matters Platform Engineering Won’t Kill the DevOps Star
THE NEW STACK UPDATE A newsletter digest of the week’s most important stories & analyses.
The New stack does not sell your information or share it with unaffiliated third parties. By continuing, you agree to our Terms of Use and Privacy Policy.