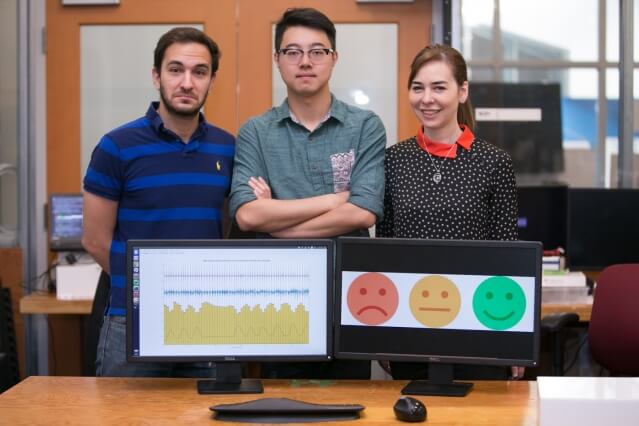 We humans aren’t always so skilled at determining the emotional states of other people. After all, we learn from a relatively young age to hide our emotions, or at least, to control and keep them relatively private. But while we may be able to successfully mask our emotions from other humans, machines may soon be able to zero in on how we really feel, using wireless signals and machine learning algorithms.

Researchers from MIT’s Computer Science and Artificial Intelligence Laboratory (CSAIL) have developed what they call EQ-Radio, a device that can “detect” emotional states of human subjects. It works by bouncing wireless radio signals off the human body to detect physiological changes such as an accelerated heartbeat, or an adjustment in breathing, and analyzes this raw data using machine learning algorithms to help infer feelings like happiness, anger and sadness.

EQ-Radio does this without the use of on-body electrodes, and is surprisingly accurate: it can correctly determine subtle physical changes 87 percent of the time, making it as accurate as conventional tools like ECG monitors or evaluation systems that employ audiovisual cues to elicit outward signs of emotions.

It may sound a little unsettling perhaps that your computer may someday be able to ascertain what you’re feeling in the moment, but researchers foresee a lot of potential for the technology, particularly in the medical field, where unwieldy medical equipment might become more simplified and easy to use, without compromising precision.

“Our work shows that wireless signals can capture information about human behavior that is not always visible to the naked eye,” said Dina Katabi, a professor who led the team and co-authored the paper with Ph.D. students Fadel Adib and Mingmin Zhao. “We believe that our results could pave the way for future technologies that could help monitor and diagnose conditions like depression and anxiety.”

The EQ-Radio device works by first wirelessly measuring a subject’s heart beats much like an ECG machine, by transmitting radio frequencies that are reflected off the body. These signals are recaptured using a radar technique called Frequency Modulated Carrier Waves (FMCW), which is better at extracting vital signs and monitoring multiple subjects at the same time.

A “heartbeat extraction” algorithm is then used to break these reflected signals down into individual heartbeats, allowing the system to analyze changes between heartbeats over time. “The resulting beats are then used to compute emotion-dependent features which feed a machine-learning emotion classifier,” wrote the team in their paper.

In other words, the data is compared against previously learned physiological signals of arousal and positive/negative categorization that indicate one of four emotional states — happiness, pleasure, sadness and anger.

The team believes there are also other applications beyond medicine, wherever machines might be needed to track and respond more intelligently to users’ emotions.

“We picture EQ-Radio being used in entertainment, consumer behavior, and healthcare,” said Zhao. “For example, smart homes could use information about your emotions to adjust the music or even suggest that you get some fresh air if you’ve been sad for a few days.”

While incorporating more intelligent affective computing into smarter homes and smarter devices would certainly be more useful, the idea that it could be used to help companies better manipulate consumer behavior is a bit vexing; after all, we are already inundated with things and plagued with impulsive behaviors we don’t really need.

But if it proves to be cost-effective for the bottom line, the technology behind EQ-Radio will most likely be yet another tool to add to the arsenal utilized by advertisers in the emerging neuromarketing industry, where consumers’ sensorimotor, cognitive, affective responses and other biometrics to marketing stimuli are measured and studied. Then, there’s also the creep factor: could this technology potentially be misused by nefarious characters or overzealous law enforcement agents to surveil or profile unsuspecting targets?

Regardless of the implications, this new research is yet another development exploring the fascinating possibilities behind wireless technologies. For instance, Katabi and Adib previously collaborated on research showing how WiFi signals could be used as a type of radar to track hidden targets. Other scientists are looking into how wireless signals could be used to power battery-free devices, and even as a mode of authentication that could help better secure the growing Internet of Things.

Ultimately, the tech behind EQ-Radio brings us one step closer toward creating emotionally intelligent machines, said Zhao: “We view this work as the next step in trying to develop computers that can understand us better at an emotional level and potentially interact with us similarly to how we interact with other human beings.”

Share this story
RELATED STORIES
The Rise of Cloud Development and the End of Localhost Unsafe Rust in the Wild 5 Use Cases to Demonstrate the True Value of AIOps 3 Trade-offs to Consider When Deploying Apache Kafka in the Cloud What’s Stopping WebAssembly from Widespread Adoption?
Share this story
RELATED STORIES
Defining the Modern Bare Metal Cloud What’s Stopping WebAssembly from Widespread Adoption? Aleo Introduces Private Application Development for Blockchain Uber Hack: It's the Simple Things That Kill Your Security How Cloud Native Workloads Affect Cardinality over Time
THE NEW STACK UPDATE A newsletter digest of the week’s most important stories & analyses.
We don't sell or share your email. By continuing, you agree to our Terms of Use and Privacy Policy.