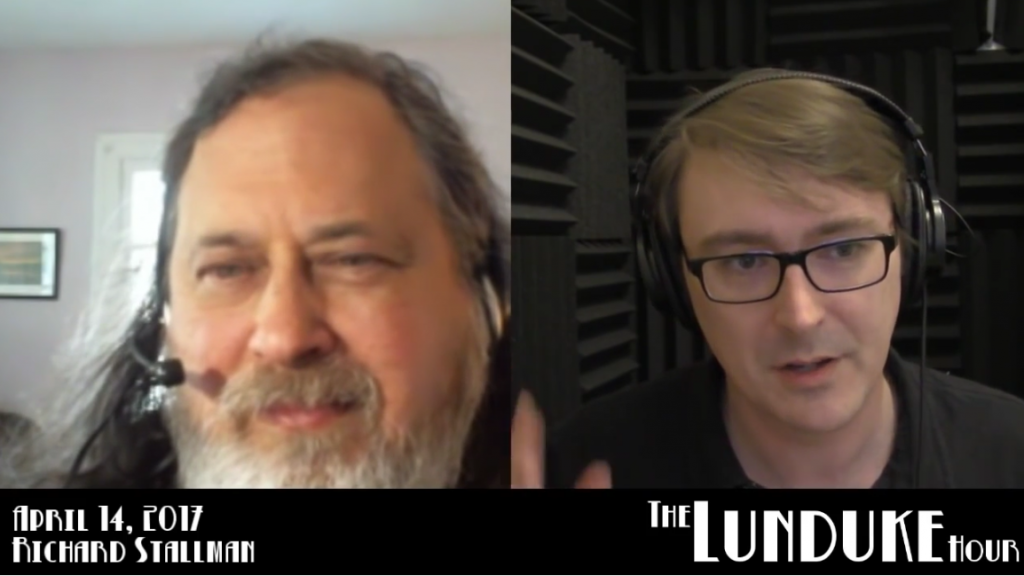 I remember seeing Richard Stallman speak at Netscape back in the mid-90s. As the founder of the Free Software Foundation (as well as the author of the GNU General Public License) Stallman inspired the audience to fight for a world where software was free, and even closed by singing his unofficial anthem.

So it was nice to see the 64-year-old advocate is still fighting the good fight, granting a rare video interview this month to Bryan Lunduke (a familiar presenter on open source topics at the Southern California Linux Exposition who’s now got a “daily computing/nerd show” on YouTube). Lunduke also advocates for open source software, and recorded the interview entirely with free software — and because “Richard has very strong opinions about YouTube” made sure that a copy also appeared at archive.org — DRM-free, and available in multiple formats.

The fireworks began almost immediately, as Lunduke started his amateur interview with current events — specifically, the way Sir Tim Berners-Lee (along with Jeff Jaffe, the CEO of the World Wide Web Consortium) endorsed the inclusion of digital rights management (DRM) protections in the upcoming standards for HTML. “Do you have any thoughts on that?” Lunduke asks coyly.

Stallman responds instantly, describing “a land menaced by a powerful empire.” His audio cuts out, and returns as he’s saying “palliate the cruelty of the subsequent occupation and conquest…”

“The people who think short-term will say, ‘Well, we can’t beat them, let’s join them,’ so they look for ways they can sign up as servitors of the conquerers, and they tell themselves that they will make the conquest less oppressive… the conquerers use them to get the jobs done that they were going to get done anyway, and if those people had refused to help, things would’ve gone more or less the same, except there’d be more opposition and better chance of ultimately throwing them out…”

Lunduke soon found himself playing a foil to Stallman’s cheerful calls for a licensing revolution. Is a DRM-free world really possible? 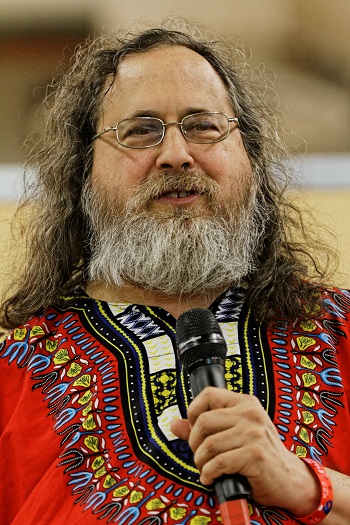 “That’s basically saying, ‘Should we give up and despair without fighting?'” Stallman responds. “Because that’s what it is. If people tell themselves we’ll never win, then they won’t fight, so they won’t win, that’s for sure. Whereas if they fight, then maybe eventually we’ll win. It just takes enough people to fight…”

So how should we software users fight back? “Reject products with DRM,” Stallman answers with a smile. “Never use any product designed to restrict you unless you have, immediately to hand, what it takes to break the handcuffs.”

And soon the merry contrarian had brought in another tangent. “Of course, you shouldn’t use Netflix anyways because it identifies people and tracks what they watch, and it imposes an unjust contract that you should certainly never agree to.”

Stallman had a lot to say about user privacy, insisting that “Nobody uses Facebook, Facebook uses them. Facebook doesn’t have users. It has useds. If you have a Facebook account, Facebook is using you to get information about you and about other people you know, and the danger has gone to the point where they may be able to control elections or sell someone else the data to do so. It’s now beyond the point of being a threat to the individuals that are used. So you really had better not be a used of Facebook…”

For his part, Lunduke thoughtfully used the hour-long interview to draw out some humanizing details about the living legend. For example, as a man who insists on free software, how does Richard Stallman himself get his own digital entertainment? “Well, the crucial point is no movie or show or song is worth giving up my freedom for,” Stallman answers. “So I don’t.

“The only ways I will get copies of publications is when there’s an ethical way to do it, one that doesn’t mistreat me, doesn’t do injustice to those who are using it.” The first injustice to avoid is DRM — but of course, Richard Stallman doesn’t have any players that will play DRM-protected software. And injustice #2? End user license agreements… Stallman just refuses to agree to them.

“Ever,” Stallman insists. “So this means I can’t get music over the internet because they impose EULAs. I can buy a CD for the music, and I do that, but I won’t get the same music as a file if I have to agree to a EULA. When you buy a CD, you don’t agree to any license…”

“Likewise, I won’t get ebooks if they have EULAs or DRM.”

And injustice #3? Tracking. (Typically found in online publications…) “I hate surrendering to an injustice. Which books I read, which music I listen to — it’s not really a secret, that I’m concerned that it would endanger me if anyone knew, that’s not the point… I want to fight surveillance! I don’t want to give in. And if I got a publication in a way that tracked me, I’d be giving in. I’d be surrendering where I could have resisted.”

“So I buy music in CDs from physical stores… The problem is in the U.S. it’s hard to find such stores anymore.”

But throughout the interview he also sounded his familiar themes, reminding Lunduke that “Proprietary software is an injustice, because it’s controlled by one entity, the proprietor — often the developer, not always — and it gives that proprietor power over every user. That is the fundamental injustice of proprietary software. That’s why I refuse to use it. That’s why it should not exist, it must not exist.”

That invites the inevitable follow-up: “How do you feel that fight has gone so far?”

Stallman touts the Respect Your Freedom certificate, the Free Software Foundation’s highly-covered endorsements for peripherals and computers. “So you can see we’re advancing, in various directions. And yet you look at all those mobile devices that are full of peripherals that require non-free software at the system level, so there’s no way to free them and have them work, except lots of painstaking reverse engineering. Which is proceeding slowly.”

But later Stallman says he’s running Trisquel’s GNU/Linux distro on a ThinkPad x60, “one of the models of a computer that can run a free BIOS with no binary blobs in the BIOS or in Linux, no proprietary software at any level of the GNU system. This is basically what we were aiming for 34 years ago.”

Stallman never seems to lose his faith — or his fire. “We keep advancing, but new areas of computing keep arising which are totally zones of enslavement, or subjugation. What you can do with free software keeps growing — there are areas, such as for instance graphic design and animation, that nowadays you can do reasonably well with free software… But at the same time, most people who use the internet are using disservices which basically exploit them to get their personal information…”

But in a new twist, Stallman also had some harsh words for connected devices, which he calls “the internet of Stings.”

“I personally wouldn’t tolerate anything in my home that was talking to the internet except for my computer.” Stallman sees a myriad of problems in the devices, from surveillance, DRM, and back doors, to censorship and tethering to a remote server. “If any proprietary program nowadays has no malicious functionality, that’s basically luck.”

But then again, Stallman traces all the problems back to their original sin. “Ultimately proprietary software is always an injustice because you can’t change it yourself… With free software you can remove any malicious functionality [or] a few other users can get together and do it and release their modified version, and you just have to use it. With free software, the community of users can defend itself from malicious functionalities…

But there were occasional glimpses of the man behind the legend. Stallman quips that “I was involuntarily self-promoted into management,” and Lunduke commiserates, saying he’s starting to miss coding. “Do you ever get that urge to go back there and just sit in a dark room and code for a weekend?”

“The thing is,” Stallman responds, “there are now so many people working on free programs that if I started a project, by the time I got it done someone else would probably have written one.”

So he focuses on something that’s less common. “We need more people to speak about free software and champion it in a firm way, and say ‘We’ve got to keep fighting because surrender leads to defeat.'”

Lunduke says, “If you don’t surrender, at least there’s a chance.”

Lunduke felt he had to relay some warm thank-yous from his viewers for all of Stallman’s inspiration — and Stallman had a ready response. “The best way to thank me and the thousands of other people who’ve worked on GNU is by helping us advance. So look at GNU.org/help, and you’ll see dozens of different kinds of work you can do or contributions you can make — and it’s not all programming… So roll up your sleeves and work…!”

“There’s so many different ways, to contribute to the cause.”

And the interview comes to a grand climax when Lunduke asks what may be the ultimate question. “If, right now today, the countries of the world banded together and passed a unanimous law outlawing all proprietary software and made free software the de facto, what would you then do with the remainder of your days?”

Stallman hedges that the solution isn’t a law. Proprietary software is like a dangerous drug, and “we’ve got to teach people to get off of it.” But if all of his wishes came true, what would Richard Stallman do then?

“Well, if there are still other injustices in the world, I’m sure I’ll be able to make some contribution to putting an end to them.”

SHARE THIS STORY
RELATED STORIES
The Power and Ethical Dilemma of AI Image Generation Models Wellspring of Creativity: Why Public Domain Matters Java's James Gosling on Fame, Freedom, Failure Modes and Fun Entrepreneurship for Engineers: Avoiding Feature Bloat Platform Engineering Won’t Kill the DevOps Star
SHARE THIS STORY
RELATED STORIES
Why Your Code Sucks: Common Excuses for Bad Programming Donald Knuth's 2022 'Christmas Tree' Lecture Is about Trees A Brief DevOps History: The Road to CI/CD It Happened to Me: How I Suddenly Owed AWS $13,000... Snack Stack: Turning Winter Comfort Food up to 11
THE NEW STACK UPDATE A newsletter digest of the week’s most important stories & analyses.
The New stack does not sell your information or share it with unaffiliated third parties. By continuing, you agree to our Terms of Use and Privacy Policy.