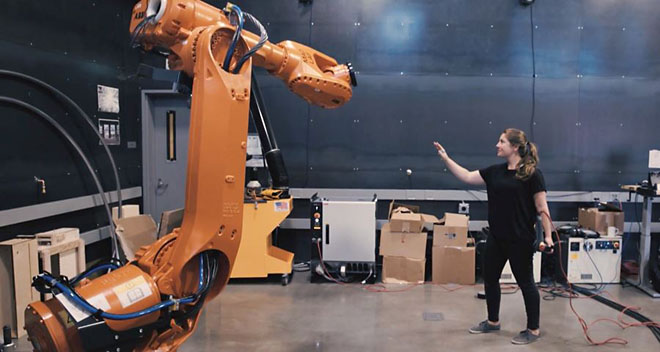 The pace of innovation in technology is bringing in automation and robotization in many parts of our lives, from self-driving cars to grocery-delivering robots, to even drones that can plant crops. That fearful specter of the question, “What will we do when the robots take all the jobs?” hangs in the air, fuelling an understandable fear of the very machines that may someday replace us — literally.

But according to American multidisciplinary designer and researcher, Madeline Gannon, robots should not be feared. “Humans and robots are companion species on this planet. We need each other,” states Gannon, who believes that robots can be designed to focus on human interactions, and made to augment human abilities, rather than replacing them outright.

Gannon isn’t your typical engineer or roboticist. Currently finishing up her doctorate at Carnegie Mellon University, Gannon comes from a background in computational design and architecture and is the founder of MADLAB and co-founder of ATONATON, both research studios inventing new methods of communication between humans and machines that make things. 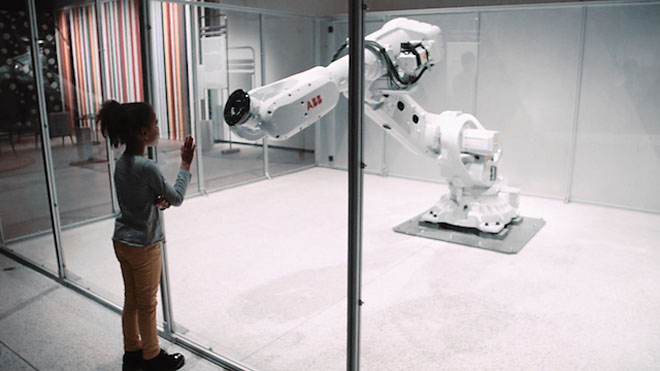 Though she has worked with a variety of manufacturing machines like 3D printers and CNC machines, more recently, Gannon has become interested in industrial robots, those hulking contraptions that one typically sees on automobile assembly lines. Of course, these are also the same kinds of robots that have been involved in a number of serious workplace accidents, which has given rise to the idea that these are “dangerous” robots. So it’s no wonder that this recent direction has earned Gannon nicknames such as “the robot whisperer” or “the robot tamer.”

Hoping to counter this somewhat irrational fear of robots, Gannon’s most recent collaboration (with the development team of Julián Sandoval, Kevyn McPhail and Ben Snell) is the creation of Mimus, an one-ton ABB IRB 6700 industrial robot that has been reprogrammed to respond to human interaction with an animal-like curiosity, currently on exhibition at London’s Design Museum.

“Mimus is programmed with a very simple agent-based behavior that generates her movement and trajectory,” Gannon explained on The Creators Project post on Vice. “As the programmer, I set up the boundaries of where she can and cannot go. So, for example, she can’t run into the floor or her enclosure, but she decides how to move to go visit a person. This agent-based behavior is also what [gives] Mimus her animal-like movement. She seeks and wanders to a person, instead of mirroring their movement directly.”

Though she is kept within a transparent enclosure, Mimus uses sensors embedded in the ceiling above to allow her to sense the crowd around her. Her tracking program assigns attributes to each person detected, based on their height, proximity, time spent at the exhibition, or whether they are part of a group of people or alone. To make sure the robot doesn’t over-attach to any particular person, Mimus has been programmed with an attention span of sorts, and she will gravitate toward what her underlying algorithms deem the “most interesting” person. That person will change over time as the attributes change. For example, as soon as the “most interesting” person stands around for too long, Mimus’ “bored timer [starts ticking]” and will prompt her to move on to the next person. 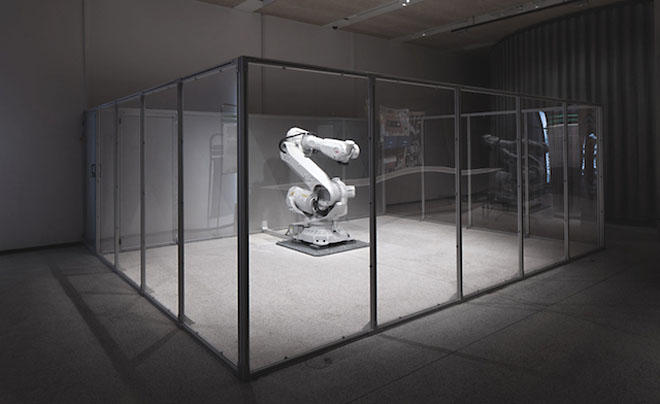 It may seem like a bit of a stretch, but it’s these programmed, animal-like qualities that prompt Gannon to characterize Mimus as a kind of “living creature.” Freed from its industrial context, and placed in an enclosure that’s reminiscent of a zoo environment, this giant robot seems much more benign and friendly than the robot-fearing pundits might have you believe. Because it’s living things we have experience interacting with — robots, not so much.

“When we approach an animal for the first time, we instinctively look for cues in its body language that broadcast its internal state of mind,” Gannon pointed out. “For example, a dog’s tail shows you if it’s excited or threatened; a cat’s crouch shows you if it’s stretching or about to pounce.”

Gannon’s ultimate aim is to create what she calls “empathetic interfaces,” where an emotional rapport between humans and their machines can be built and sustained. Given that we can at least expect a future with collaborative robots that will work alongside us, Mimus represents an interesting workaround to help heighten our empathy toward autonomous machines that we might not yet fully understand or know how to control. When robots act more like something we can understand, the fear lets up, at least enough for us to become curious in response.

Created with the support of Autodesk’s Boston Build Space and Pier 9, ABB Ltd, and The Frank-Ratchye Studio for Creative Inquiry, Mimus will be on view as part of Fear and Love: Reactions to a Complex World at the Design Museum until April 27, 2017.