a team of researchers from Georgia Institute of Technology and Northwestern University are developing a modular system of smaller robots that can not only transform themselves into various shapes, but also move in what may be a new kind of robot locomotion.
Sep 27th, 2019 11:16am by Kimberley Mok 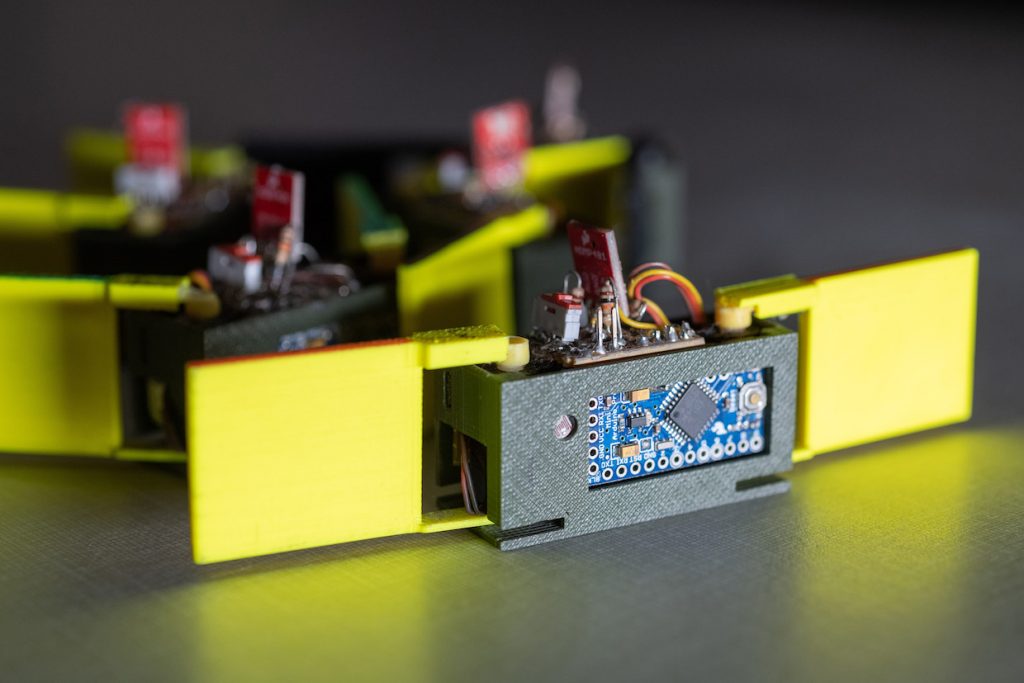 What makes a robot? Ask most people, and their typical mental image of a robot is of a monolithic machine that’s made up of various, smaller components, such as different sensors, actuators and batteries, all working together as a complex system. While such a machine is well-suited to performing specific tasks, it is more or less limited to those predefined functions. Not surprisingly, such constraints have prompted roboticists to develop smaller, more versatile, modular robots that can transform and adapt themselves to any situation — whether it’s modular drones that can shape-shift or build cooperative structures in mid-air, or multipurpose mini-wearables, or even mini-bots that can swarm together to form artificial nervous systems.

Thinking along these same lines, a team of researchers from Georgia Institute of Technology and Northwestern University is developing a modular system of smaller robots that can not only transform themselves into various shapes but also move in what may be a new kind of robot locomotion. Watch them go:

Dubbed “smarticles” — shorthand for “smart active particles” — these 3D printed bots are relatively simple in design, as they are equipped with only two “wings” for flapping, as well as simple motors and sensors, and have only limited computational abilities. Instead of outfitting them with complex components for mobility, the team focused on relying on the laws of physics and their mechanical behavior in order to develop a new way to get these winged bots from one place to another.

Their preliminary solution was simple: enclose several of these smarticles within a ring, forming what the team called a “supersmarticle” of bumping, flapping mini-bots that seem to move collectively in an intriguing — albeit in a random or stochastic — way, possibly demonstrating a new kind of emergent, self-propelling behavior that is more than the sum of its parts.

“Even though no individual robot could move on its own, the cloud composed of multiple robots could move as it pushed itself apart and shrink as it pulled itself together,” explained Georgia Tech physics professor and one of the study’s authors, Daniel Goldman in a statement. “If you put a ring around the cloud of little robots, they start kicking each other around and the larger ring — what we call a supersmarticle — moves around randomly.” 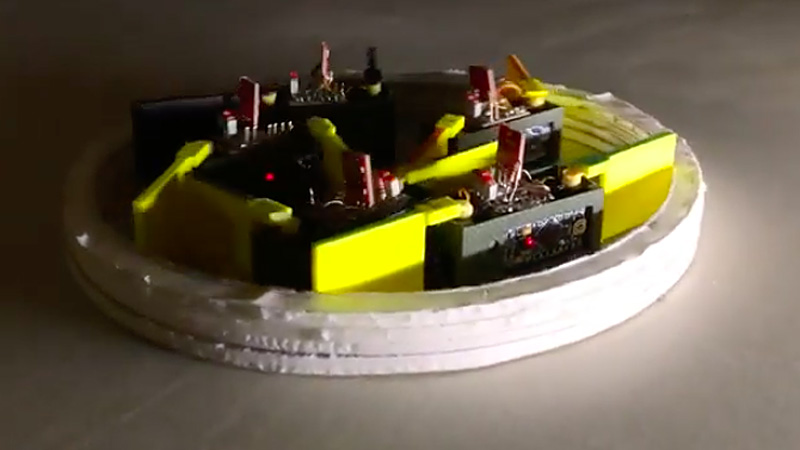 Interestingly, the project was inspired by the haphazard behavior of large construction staples — which, when poured out of a container, seemed to shift and form tower-like structures that would stand on their own until shaken loose. In studying these movements, the team realized that small, discrete objects could combine to create larger agglomerations with unexpected results, much like how entire, complex biological organisms are made out of tiny cells that don’t seem to do much on their own.

“A robot made of other rudimentary robots became the vision,” said Goldman. “You could imagine making a robot in which you would tweak its geometric parameters a bit and what emerges is qualitatively new behaviors.” 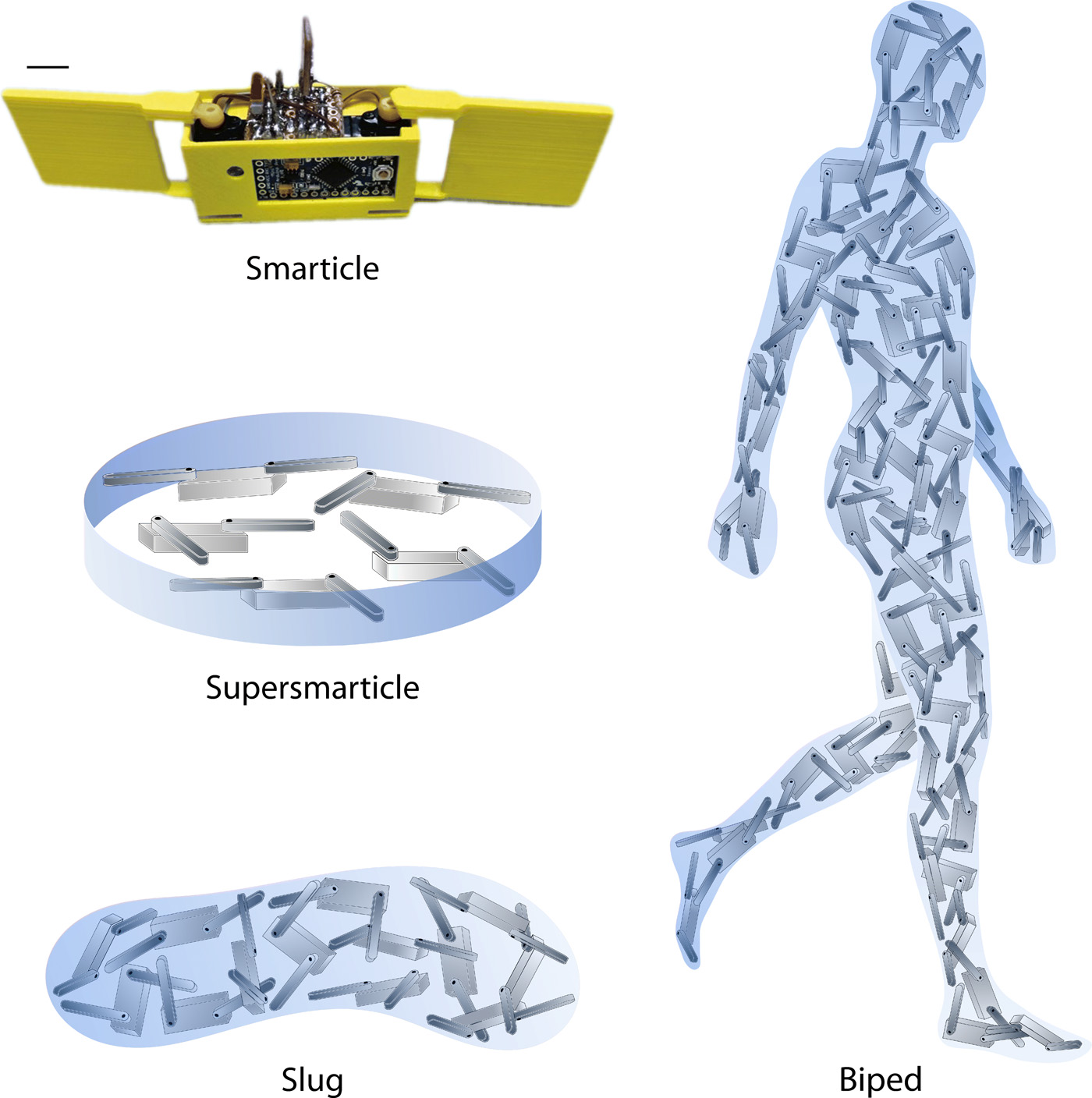 To test out these emergent properties further, the team set up a decentralized control system using a nonparametric, unsupervised learning algorithm that could map collective interactions to the control signal. “Using this algorithm, we modeled supersmarticle dynamics and demonstrate that the ensemble is capable of rich locomotion by taking advantage of more complex control strategies,” they wrote. “We validated our algorithm by leading the supersmarticle on a simple path, demonstrating that collective locomotors may be reliably controlled through their ensemble properties despite being composed of stochastically interacting unreliable elements.”

Besides this decentralized control system, a rudimentary method of steering was developed by the researchers by adding photoelectric sensors to the robots, so that when a directed source of light hits a bot, it will stop flapping its arms. They did this because they noticed that when one bot in the ring ceased to move, the rest of the bots would tend to move toward it.

While it will be a while before a more reliable system of control and steering are developed, the team believes that these little machines could point the way to a new class of “stochastic robots” that merge to create new systems, which can then collectively alter their form and function on the fly. For example, a whole swarm of these tiny robots could assemble to create a temporary bridge over a waterway, or adapt and reconfigure themselves to form a means to rescue victims in a disaster situation. They might even consolidate to form “stochastic robotic collectives” that mimic the behavior of biological organisms. Whatever the case may be, robots of the future will likely be much more surprisingly versatile than we are able to imagine today.