Robots Could Someday be Controlled With Bacteria-Based “Brains” 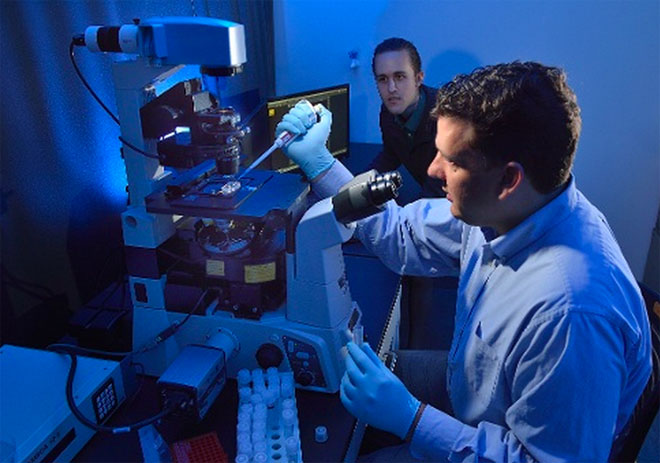 In a future where hotels, restaurants and hospitals may be populated by an army of service robots, outfitting these machines with biological brains is becoming a distinct possibility. Scientists have already experimented with using rat-sourced neurons as a way to control hybrid robots or “hybrots,” and now researchers from Virginia Tech believe that bioengineered bacteria could someday be used to guide a biomimetic robot host in a similar fashion.

In a study published last month in “Scientific Reports,” Keith Heyde and Warren Ruder describe their findings in using mathematical models that show an inanimate robot can be controlled by a microbiome of engineered E. coli bacteria. The study was inspired by theories about how bacteria can symbiotically and biochemically change the behavior of host organisms, in addition to real experiments showing that bacteria can change the mating behavior of fruit flies, or using probiotics to lower mice’s stress levels.

The idea was to approach the robot as a host organism, and combine these two systems of machine and microorganism, says Ruder:

Basically we were trying to find out from the mathematical model if we could build a living microbiome on a nonliving host and control the host through the microbiome. We found that robots may indeed be able to function with a bacterial brain.

The team’s models merged established computational equations that simulate engineered gene expression levels of E. coli and robot movement, linking them with an interface technology called microfluidics. By building a microfluidic bioreactor where the bacterial colonies could exist, and interfacing it with a mobile robot, the scientists were able to show that unique decision-making and “emergent robotic behavior” was possible in a robot powered by a bacterial “brain.” In one instance, the bacterial “brain” guided the robot toward more food, and actually pounced on this nourishment in an anticipatory way, similar to how a predator may stalk and capture prey.

According to the Virginia Tech press release, the researchers foresee a multitude of potential uses for this kind of biosynthetic hybrid and its underlying mathematical models. These computational models could be used to investigate how soil bacteria affect livestock animals, with an eye toward improving agricultural methods. Medicine would benefit too: as we better understand how bacteria affect the overall health “ecosystem” within the body, “bacteria-based prescriptions” may be introduced to fight off a variety of diseases and even conditions like depression.

Though these are promising virtual simulations, the researchers are now aiming to test these findings by creating real-life robots equipped with small fluorescent microscopes that can read and respond to the different genetic expressions of modified E. coli. If these developments are successful, we will have to adapt to a new notion where robots are not singularly machines, but entities with living, dynamic brains, capable of behaviors we might not have previously imagined possible. Read the study over at “Scientific Reports” and Virginia Tech.