Airtable alternative Rowy builds on the resources of Google Cloud Platform to break through its barriers.
May 2nd, 2022 3:00am by Susan Hall 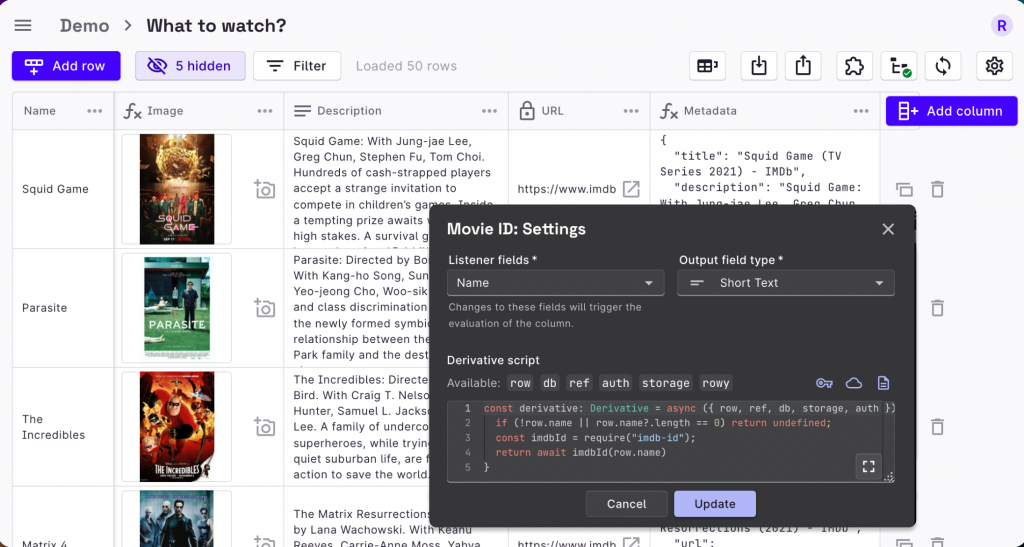 While low-code/no-code tools can help startups get off the ground quickly, users too soon reach the limits of those platforms.

“When you want to do something the low-code platform doesn’t support, you’re either fighting it or dropping down to normal code anyhow,” Mike Mason, global head of technology at the tech consultancy Thoughtworks told The New Stack.

Rowy, an open source project taking aim at the limitations of the Airtable cloud collaboration service, builds on the resources of Google Cloud Platform to break through those barriers.

Most low-code/no-code tools lack flexibility, have feature limitations, don’t scale well and are expensive, according to Rowy cofounder Harini Janakiraman.

Rowy was built out of the founders’ own pain points, Janakiraman wrote on Product Hunt:

Rowy also enables users to write cloud functions in the browser; add automation with extensions to tools like Algolia, Twilio, SendGrid, BigQuery and Slack; and use any npm packages and APIs.

Using react-data-grid, it renders only the tables being viewed to keep the scrolling experience smooth.

In a “What to Watch” demo using a table of movies, if you add a row, then type in a movie name, the other fields are populated automatically, using a IMDb npm package to pull the data.

Here are some other demos to play with:

The early-stage company is a team of five based near Sydney, Australia. It recently was among 15 startups Sequoia Capital India chose for a new program for female founders in Southeast Asia and India called the Sequoia Spark Fellowship.

Rowy was founded mid-last year. It released v2.4 in March. It ranks among the fastest-growing open source startups, according to the ROSS Index, published every quarter by Runa Capital.

More than a Spreadsheet

There’s a wealth of Airtable competitors, and even open source rivals such as NocoDB, which transforms MySQL/Postgres/SQLite data, and Postgres-based Baserow. Google has its own product called Tables, and Microsoft has Lists.

Those tools allow you to write some functions, which are more like formulas that are a combination of different fields, according to Janakiraman.

“There is a lot of Airtable-like UI alternatives, which are focused on giving you a Google Sheet but with more steroids, where you can have images, different types of fields and so on,” she said.

“The way we see ourselves are different is that … instead of writing your cloud functions in isolation in Visual Studio code, and then going to a cloud console … you can not just view your Firestore data in an Airtable-like UI, but also build cloud functions, automations and workflows based on your data, connect to any third-party tool, use npms and APIs right in the browser without the hassle of CLIs, terminals or native consoles.”

Other backend-as-a-service startups such as Supabase and Canonic are more infrastructure-focused, she said. They’re competing with Google engineers in trying to build a better database or a better cloud platform.

“We are saying, ‘We are this interface that allows you to access your existing cloud platform better. So we’re not asking developers to move away from building on Google Cloud to something else, or some other database or some other cloud platform. We are just saying [to] developers, ‘You can continue to build on your existing system in a code that you’re familiar with. We’re not asking you to learn a new language. This is JavaScript, using common frameworks, and so on. But we are giving them a kind of tool that augments and gives them productivity to develop faster.”

The company also recently released an open source feedback widget called Feedback Fin that allows you to insert a button in any application to collect feedback.

Susan Hall is the Sponsor Editor for The New Stack. Her job is to help sponsors attain the widest readership possible for their contributed content. She has written for The New Stack since its early days, as well as sites...
Read more from Susan Hall
SHARE THIS STORY
RELATED STORIES
Enterprise Blockchain Is Doomed Data Lake Security: Dive into the Best Practices Why So Many Organizations' Artificial Intelligence Initiatives Fail AgStack: Linux Foundation Project Will Bring Farms Online Why a DataOps Team Needs a Database Reliability Engineer
TNS owner Insight Partners is an investor in: The New Stack.
SHARE THIS STORY
RELATED STORIES
One Technology That Makes Renewable Energy More Efficient 7 Best Practices for Data Visualization Get Started with Text Classification How Ray, a Distributed AI Framework, Helps Power ChatGPT Why So Many Organizations' Artificial Intelligence Initiatives Fail
THE NEW STACK UPDATE A newsletter digest of the week’s most important stories & analyses.
The New stack does not sell your information or share it with unaffiliated third parties. By continuing, you agree to our Terms of Use and Privacy Policy.