RSS3 aims to be the feed standard for Web3. It has no relation to previous versions of RSS, and uses crypto wallets as the basis for feeds.
Feb 21st, 2022 6:00am by Richard MacManus 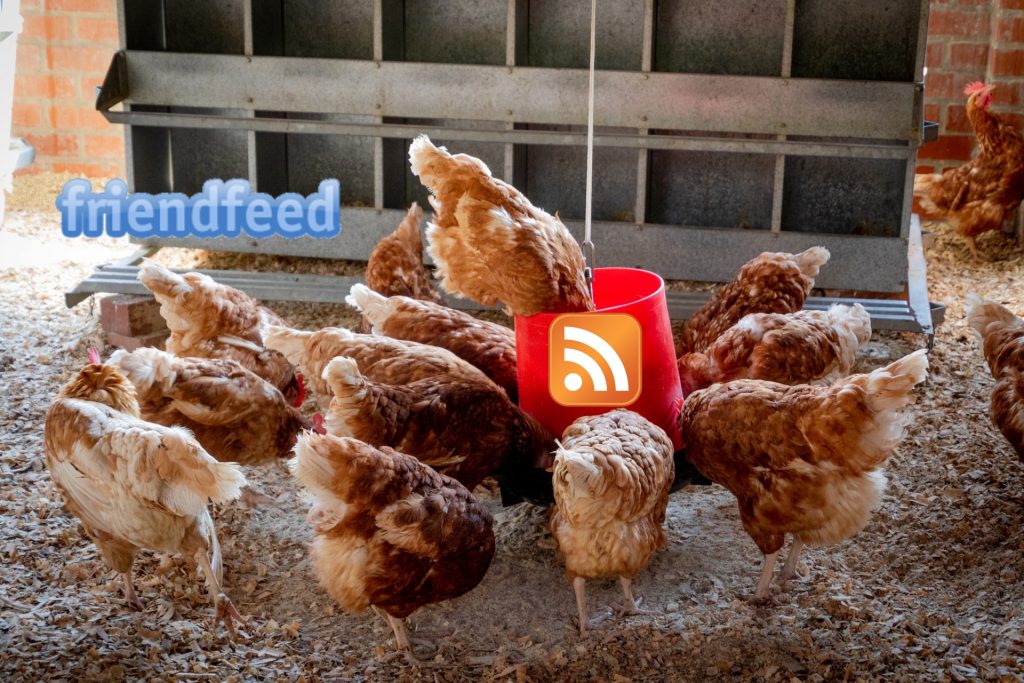 Photo by Magda Ehlers from Pexels.

One of the forgotten technologies of this era of the internet is RSS (Really Simple Syndication), an open syndication protocol that helped define the Web 2.0 era. From the early 2000s, RSS enabled anyone to publish their thoughts to the web, via blogging, and made it relatively easy for people to subscribe to those thoughts, via RSS Readers. RSS feeds made the web truly two-way (or read/write, in my preferred parlance). However, when the likes of Facebook and Twitter started to gain traction in the late 2000s with their own, proprietary, feeds, RSS began to lose relevance. Now, alas, it’s merely a niche technology in our social media-saturated culture.

The question moving forward is: does RSS, or a protocol like it, have a place in the emerging Web3? Do we even need syndication feeds on a web platform defined by blockchains and cryptocurrencies? To find out, I spoke to a founder of a new protocol called RSS3, “a next-generation feed standard that aims to support efficient and decentralized information distribution.” RSS3 has no relation to previous versions of RSS, but it was clearly inspired by existing RSS specifications.

The War of the Read/Write Web

Let’s first put RSS3 into context, as a lot has happened with “feeds” over the past two decades. Facebook has been at the center of it all — and coincidentally, it was in the news last week for removing the word “news” from its feeds. Facebook’s “news feed” was always a strange moniker, but even more so in the current era of rampant misinformation. Regardless, Facebook is the company most responsible for making RSS all but obsolete in the 2010s. The dream of blogging in the early 2000s was that everyone would publish their thoughts to the web using a blogging service. Of course, that never happened and it was social networking — primarily via Facebook — that prompted the mainstream to publish and subscribe (the latter renamed “follow”) on the internet.

So, Facebook — and social media in general — won the battle for the hearts and minds of ordinary people on the read/write web. RSS was one of the losers in that battle. But that doesn’t mean the war is over.

One of the reasons why Web3 is a big trend currently is to push back against the dominance of Facebook, Twitter, TikTok, and others, in the online social discourse. Proponents of Web3 claim that “decentralization and permissionless innovation,” in the words of Marc Andreessen, can wrest back user control from platforms like Facebook. (It’s worth noting that Andreessen has a foot in both camps, because his VC firm a16z is a huge investor in Web3 startups, but he’s also on the board of Meta.)

However, syndication of content in a blockchain world is not easy, primarily because of the financialization of content platforms. In a nutshell, you have to pay to play — and not just publishers, but readers too. Commenting on or “liking” a blog post that lives on a blockchain requires an addition to the blockchain, which costs money (“gas fees” in Ethereum).

Who’s Behind RSS3 and How Does It Work?

To understand what RSS3 does, I reached out to co-founder Joshua Meteora. His partner in RSS3 is an anonymous developer who goes by the handle @DIYgod, who has almost 10,000 followers on GitHub. One of DIYGod’s notable past projects was RSSHub, an RSS-scraping tool with the tagline “Everything is RSSible.”

According to a thread on Twitter, Meteora and @DIYGod founded a company called Natural Selection Labs in order to build RSS3. It has seed funding from the likes of CoinShares Ventures, Coinbase Ventures, Dapper Labs, Arweave, and Fabric Ventures.

RSS3 is in active development, with the current stable version being v0.3.1. According to its GitHub page, v4 is “in hot discussion” currently.

When I first started looking into RSS3, it was unclear to me what its purpose was. Couldn’t a user of, say, a Web3 blog just use traditional RSS to syndicate their posts? But after chatting with Meteora, it became clear that an RSS3 feed wouldn’t be attached to a blog — but a crypto wallet.

“Let’s take Mirror.xyz as an example,” said Meteora. “It’s basically a blogging platform that uses your ETH wallet as an account, and stores on Arweave. In that case, a blogger with an ETH wallet won’t need to register with Mirror (technically), but just take the ETH wallet with him to Mirror and start blogging. Since all articles are stored on Arweave [a p2p storage network], theoretically no one owns it and no one can censor it. Also, all articles are open and permissionless. However, it was very hard for any application to pull Mirror’s articles directly from Arweave without relying on Mirror as a centralized party, until RSS3 came out. Basically, it creates a feed for any address, which would include a lot of interesting stuff — including, of course, Mirror blogs. Without RSS3, accessing Mirror’s articles can be very challenging for dApps.”

So to clarify, when Meteora says that RSS3 creates “a feed for any address,” he means for any wallet address. The way Ethereum dApps work is that they use a specific wallet address as a user’s identity. A user might have multiple wallets (in fact this is very common), so what RSS3 does is provide a feed for each identity a user has. If they use the same wallet to post their content to the web, no matter which blogging platform(s) they use, there is just one feed representing that person’s content.

Revery: a FriendFeed for RSS3

Meteora says there are multiple apps already being built on top of RSS3, including an app called Revery that allows users to connect as many wallets as they want — meaning you can aggregate all of your RSS3 feeds into one place.

Revery reminded me of an old Web 2.0 app called FriendFeed. Launched in 2007, FriendFeed was a way to aggregate all of your social networking and publishing feeds in one place — and it was much beloved by web geeks. Sadly, it was acquired by Facebook in 2009 and was basically never heard from again. 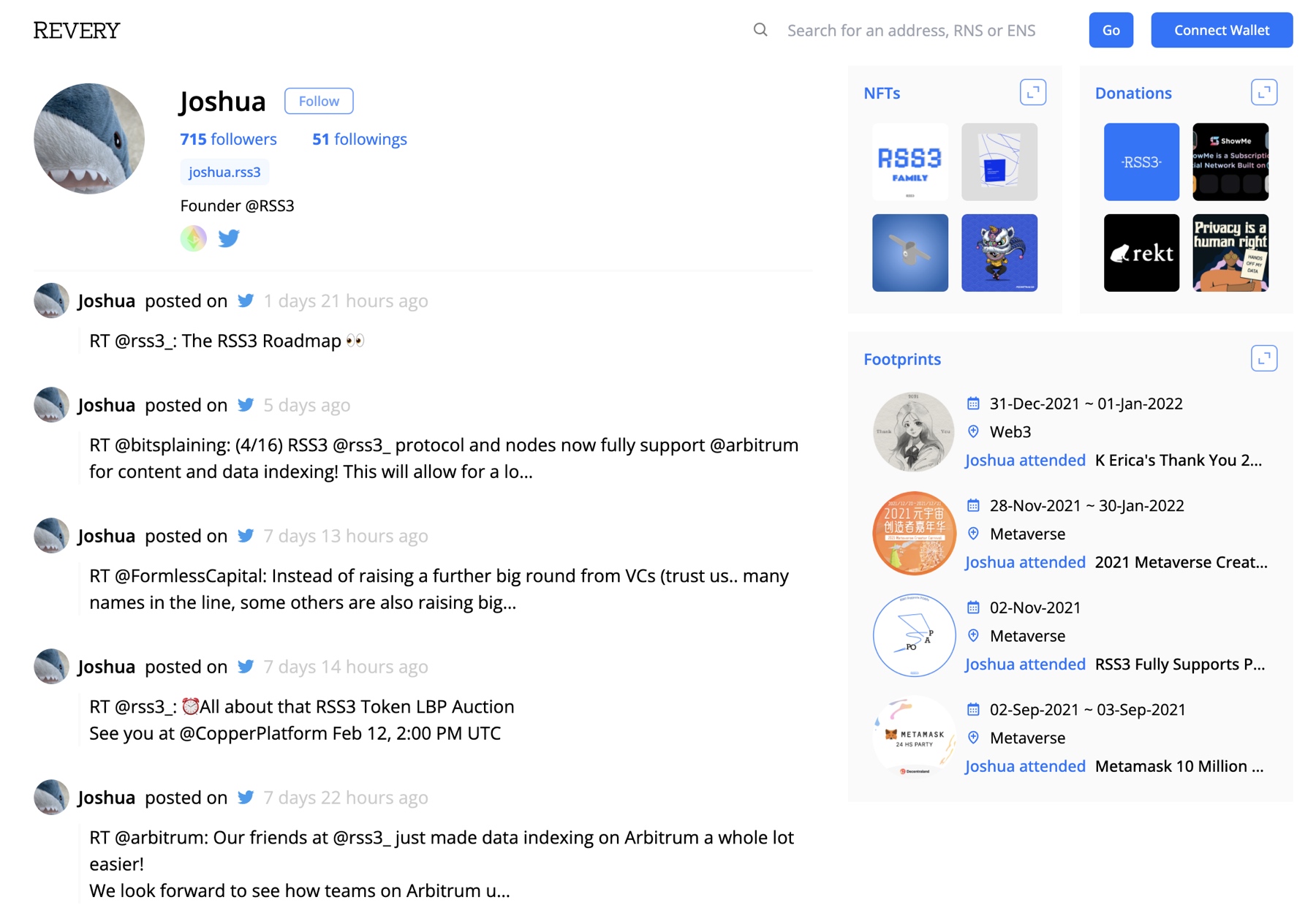 The Revery of Joshua Meteora

Even if you don’t use Revery or a similar FriendFeed-like app, RSS3 makes it possible to aggregate all of your content across the web into one syndication feed (provided you use the same wallet).

Does RSS3 Have a Future?

It’s very early days for the RSS3 project, since the (small) community is still working out the details of the specification. But, in theory, it makes sense to create syndication feeds for Web3 based on wallet ID, rather than a blog.

One key challenge for RSS3 is that we still don’t know whether using cryptocurrency wallets as a form of online ID is a viable long-term solution for the web. There are many dangers to this, particularly for non-technical users — a.k.a. mainstream users. For example, back in 2018, I tested out a blockchain-based Twitter alternative called Peepeth. But I made a user error with MetaMask, one of the top crypto wallets, and immediately lost access to my Peepeth account. I couldn’t log in again, as I’d lost my private key for the wallet! A decentralized web sounds grand in theory, until you need to call customer support (which doesn’t exist in Web3).

RSS3 is an intriguing project though and I’ll be tracking its progress. Adding syndication feeds to Web3 would certainly help improve its overall usability — which up till now, has been one of the big problems with crypto and blockchain.

Richard MacManus is a Senior Editor at The New Stack and writes about web and application development trends. Previously he founded ReadWriteWeb in 2003 and built it into one of the world’s most influential technology news sites. From the early...
Read more from Richard MacManus
SHARE THIS STORY
RELATED STORIES
Boost Customer Engagement with Real-Time Data One Technology That Makes Renewable Energy More Efficient Data Lake Security: Dive into the Best Practices Qlik Plans to Acquire Talend. Is it a Data Management Double-Dip? How to Lower Your Company‘s AI Risk in 2023
TNS owner Insight Partners is an investor in: The New Stack.
SHARE THIS STORY
RELATED STORIES
Cutting Database Costs: Comcast, Rakuten, Expedia and iFood How to Lower Your Company‘s AI Risk in 2023 Data, Analytics and AI: What Will Happen in 2023 IOTA Distributed Ledger: Beyond Blockchain for Supply Chains The Architect’s Guide to Data and File Formats
THE NEW STACK UPDATE A newsletter digest of the week’s most important stories & analyses.
The New stack does not sell your information or share it with unaffiliated third parties. By continuing, you agree to our Terms of Use and Privacy Policy.