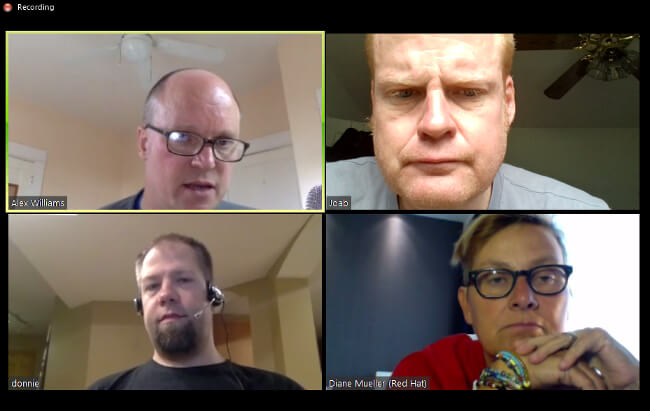 In this surprise episode of the 113th New Stack Analysts podcast, we take a quick reading on the fallout from our story, “A Docker Fork: Talk of a Split Is Now on the Table,” which described rumors of a number of prominent container ecosystem players discussing whether or not to fork the Docker codebase.

The story generated a fair amount of discussion on the interwebs, so we invited 451 Research’s Research Director Donnie Berkholz and Red Hat’s Director of Community Development for OpenShift, Diane Mueller, to get a bit more general context about the putative forking. Listen here:

#113: The Rumored Docker Fork and the FUD that Moves the Conversation Forward

“There has been a lot of changes in Docker over the past year,” Berkholz said, noting that Docker is in the tough position of reconciling its needs, as a venture-backed company, to carve out its place within a growing and fiercely competitive container community.

“They’ve had to compete with their ecosystem in many ways, to move up the stack, starting from Docker itself up to the orchestration layer and up into the management layer. They had to race to keep up, because as they’ve dedicated to innovating to Docker, they’ve had this big community of people both working in parallel to them or working on top of them, trying to add value, like Kubernetes or Mesos,” Berkholz said.

Although Red Hat was one of the companies mentioned as being in the talks, Mueller herself was not aware of any discussions taking place, she said. She did note that talk of forking “brings up a lot of issues” around keeping the community together, a community that Docker has thus far done an exceptional job of maintaining and nurturing.

“My concern with forking, if it is true, is that ultimately communities lose when the forking happens,” she opined.

Berkholz noted there is a significant difference in direction that Docker has touted in its vision of how its containers should be advanced, and compared that to being espoused by third-party vendors that are using Docker containers to support enterprise customer.

The third party vendors want to “optimize for a stable enterprise core,” whereas Docker itself wants to innovate quickly, and get features to the users as quickly as possible, Berkholz said.

“That is a hallmark of any fork where both of them do survive: there is some real difference in philosophy and differentiation that can not be reconciled between those two groups,” he said.

Being a most excellent analyst, Berkholz dug up a research paper that studied the fallout of open source software forks. Looking at 224 forks, they found 44 percent were successful branching, where both survived. These successes happened most often when there were irreconcilable differences between the forked and the forkers.

“Nobody has any major hostility against Docker. They are a company. They have to survive and do thing their thing and that is fine. It’s just about finding the right path for all the paths going forward,” Berkholz said.

“It just feels like a moment of time that is a natural moment in a lot of open source projects, especially ones that have gotten off to a such a good start as Docker has, in that there will always [be] a scuffle over who gets to be the benevolent dictator,” Mueller said.

Joab Jackson is Editor-in-Chief for The New Stack, assuring that the TNS website gets a fresh batch of cloud native news, tutorials and perspectives each day. He has logged over 25 years in infrastructure IT journalism, including stints at IDG,...
Read more from Joab Jackson
SHARE THIS STORY
RELATED STORIES
Tutorial: Deploy Acorn Apps on an Amazon EKS Cluster Acorn from the Eyes of a Docker Compose User WebAssembly Needs Schedulers, and Kubernetes Doesn't Quite Fit the Bill When Wasm and Docker Work (and Do Not Work) Together Tutorial: Deploy a Full-Stack Application to a Docker Swarm
TNS owner Insight Partners is an investor in: Docker.
SHARE THIS STORY
RELATED STORIES
WebAssembly Needs Schedulers, and Kubernetes Doesn't Quite Fit the Bill Install Dozzle, a Simple Log File Viewer for Docker 4 Ways to Optimize Your Workflows with Docker Extensions How to Deploy Containers with nerdctl .NET 7 Simplifies Route from Code to Cloud for Developers
THE NEW STACK UPDATE A newsletter digest of the week’s most important stories & analyses.
The New stack does not sell your information or share it with unaffiliated third parties. By continuing, you agree to our Terms of Use and Privacy Policy.