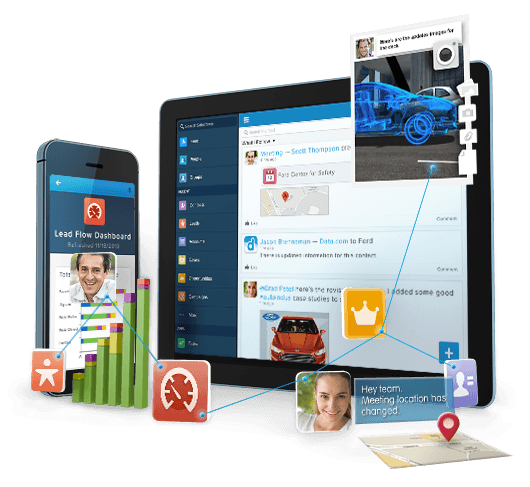 Salesforce is hoping to make it much easier for businesses to build mobile apps using its Salesforce1 platform with a new drag and drop feature that it’s talking about today. The capability puts Salesforce1 in line with many other mobile app development platforms.

Called Salesforce1 Lightening, the new capability lets developers, IT admins or anyone in a business drag and drop components to build an app. For instance, a user could place a map at the very top of the app, with a chart showing sales below it and a menu bar running along the left hand column. Other premade components include a calendar, Chatter feed, a notes box and a volume bar.

Salesforce has created a bunch of components but it’s also allowing anyone to build components. It’s launching with 25 partners who have built components like one that displays a number keypad designed to make it easy to type in pricing information on a phone and a barcode reader.

Initial partners aren’t exactly the biggest names among enterprise vendors. They include Clerisoft, Plumsoft, Skuid and the TAS group. But Salesforce appears to hope that others will also start building components. While DocuSign doesn’t appear to be an initial partner, Scott Holden, vice president of the Salesforce1 platform noted that it’d be nice to be able to drag and drop a DocuSign component into an app so that customers or partners could sign forms in an app.

Users can toggle between phone, tablet, desktop or watch views to lay out how an app should look on each form factor.

Salesforce imagines that IT or line of business people without much development experience would use this new service to build apps that workers need. Administrators can set permissions that determine who in an organization is authorized to use the tool.

Developers can create the components but then a business person who doesn’t know how to code can sit and drag and drop into the app,” Holden said.

But even if the idea isn’t particularly novel, it should make it easier for businesses to make Salesforce-based apps tailored to their needs. That’s good news for businesses using Salesforce, which historically has had a reputation for delivering a relatively poor mobile experience.

The service is currently in pilot and Salesforce expects to roll it out to general availability as part of Salesforce1 in February.

Salesforce is also announcing a handful of other updates under the “Lightning” brand, which it is using to refer to a new UI that will be used across Salesforce products. Other Lightening announcements are around a Schema Builder and a Process Builder, which is a way to build workflows.

The announcement comes a day after Salesforce took the wraps off a totally new service, Salesforce Wave, that represents a new direction for the company. Wave is a data visualization service designed to make it easy for more people in an organization to analyze data.