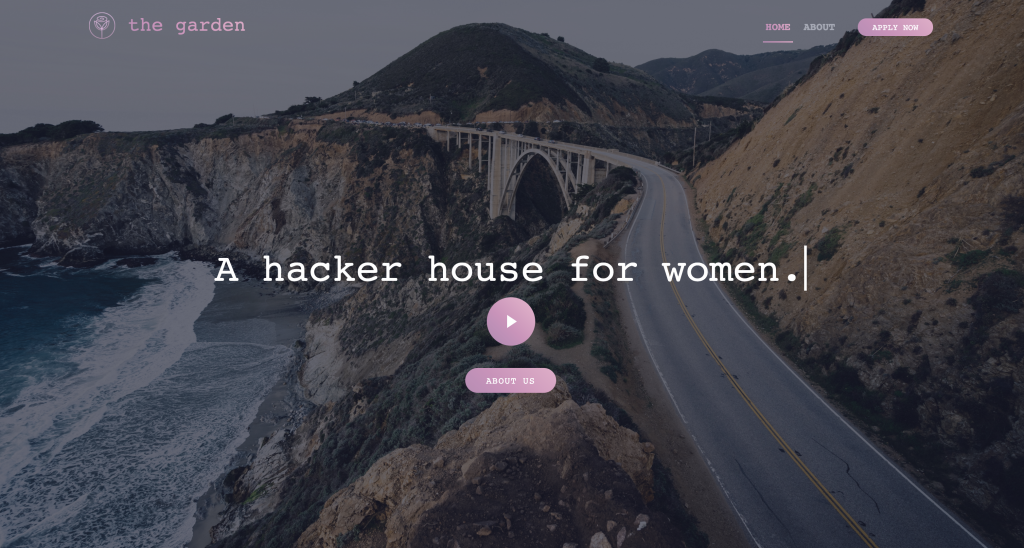 “The goal is for everyone to come into the house with their own project/company that they want to dedicate time to building,” explained co-founder Tanisha Bassan, “and do it in an environment where everyone else is also doing similar things.”

Bassan explained that they chose San Francisco “because that’s the tech city and we wanted to be right in the middle of it.

“People can launch startups, personal businesses, do research, create content, etc. We just want everyone to be building something.”

Empowering to the People

The inaugural hacker house experience will begin on June 1 when 14 women move into their low-rent quarters in San Francisco’s Nob Hill district for two months. Applications are still open, but the founders expect to finalize their selections this week. “We’ve received 60-plus applications for the first house just through social media and word of mouth,” Bassan said, adding that they’re excited that the word has already reached beyond North America.

The applications we received for the pilot house have been insane 🤯

These are all the different countries we got applicants from!

We’re excited to scale, grow, and create a community for female builders across the globe 🌎

They’re targeting their own age range in the pilot edition — 18 to 25, but “as we grow and scale we will be more inclusive of all ages…

“In the end, we just want to make sure we create a house where everyone feels comfortable and can easily become friends.”

Bassan’s co-founder Erika Meredith designed the house’s first website, which notes that besides educational book clubs, learning groups, hackathons, and guest speakers, there will also be pitch nights and demos, as well as mentors. But it also promises the experience will be “Empowering women in tech and business.” And because it’s an environment where things will grow, they’ve named their new hacker house The Garden.

“The opportunities are limitless,” Bassan wrote in an email, “and we’re hoping to create a vibrant community of women builders who are getting funded and given more opportunities in their own respective fields.”

They’re looking for women who value personal growth and helpfulness, Bassan says — and of course, have an interest in spending time building a company. “I wanted to personally surround myself with women that inspire and challenge me every single day to be a better version of myself,” Bassan said in a video on the house’s website. “If you want to join a community that collectively wants to grow and create change in the world, join the Garden Hacker House.”

“We’re going to create the next generation of female leaders,” added co-founder Meredith, “like no one has ever seen before.”

The house’s ambitious spirit draws on the dreams of the two women who co-founded it. Meredith is currently studying biology at Purdue University, and is also a research assistant at Lawrence Livermore National Lab. Asked to describe herself, Meredith said she’s “extremely passionate about the applications of powerful technologies such as machine learning, data structures, data analytics, and structural design,” with recent projects focusing on “novel computational methodologies” for accelerating biomedical research efforts.

Listening to an entrepreneurship podcast, Meredith had heard about Together Casa, a site launched earlier this year trying to simplify the creation of co-living houses with tools for bookings and payments, as well as “policies, house governance and liability assurances.”

“This past year was a lonely and troublesome part of our existence,” explained its website. “We were locked inside our homes and left uninspired. Building things can be isolating enough — now this…”

“Female empowerment is about more than just achieving equal opportunity or avoiding explicit discrimination. It is about unpacking the internalized self-worthlessness that society has gaslighted us into believing that drives our self-doubt and self-suppression.”—Erika Meredith

Up in Toronto, Bassan had keenly experienced that need for community after starting college during the year of a pandemic. “I personally felt extremely isolated and didn’t have like-minded friends around me.” She had also begun looking for a hacker house, attracted by the idea of both living and building together. “That’s what I wanted for myself, a community of ambitious people who you can live and work with.

“However most of these houses lack diversity and are usually made up of majority men. There weren’t many female-centered hacker houses,” she noted.

Bassan described her own interests as blockchain, pollution, and community building. A former product development intern in Microsoft’s Ontario office, she’s now studying physics at the University of Toronto. In 2019, at the age of 17, she won CES’s Young Innovators to Watch Award for exploring the use of quantum computing for machine learning. She described its potential for exploring problems in organic chemistry.

Meredith and Bassan both shared an interest in biotechnology, as well as in community building — including the idea of an all-female hacker house. “I have been wanting to do something like this for a while,” she told me in an email.

Meredith had contacted Tom Schulz, the founder of Together Casa, sharing her idea for an all-female hacker house — and she discovered that there was something already in the air. Schulz told Meredith he’d heard the same idea from Bassan. So after the two women were introduced, “We clicked right away and felt like we had similar goals and a good balance of skills. So we decided to partner to build the Garden!”

And she thanks the founders of Together Casa as “a good resource for us as first-time organizers.”

The Together Casa website emphasizes that who you live with makes a difference. “It’s understood that the environment you’re in defines who you are. We believe that surrounding yourself with other like-minded people can give you a true sense of belonging while accomplishing your wildest dreams.”

But looking back, Bassan remembers that they’d both been looking for hacker house communities, “but were deterred by the lack of diversity and inclusion in some of these houses… We decided to work together on creating an all-woman hacker house that is a safe space for any female or female-identifying person to live and build together.”

As Meredith explained in a recent tweet, “Female empowerment is about more than just achieving equal opportunity or avoiding explicit discrimination. It is about unpacking the internalized self-worthlessness that society has gaslighted us into believing that drives our self-doubt and self-suppression.”

People matter. Who you know and who your surround yourself with can make a huge impact on your life.

Strong communities develop strong people. The values you have, you adopted from others.

Choose your environment, don’t let it choose you.

Develop and grow at The Garden🌹

“Because most co-living experiences are currently male-dominated, our goal is to create a unique space for women to connect, share their ideas and voice their opinions,” explained their webpage.

They’ve already lined up partners who’ve subsidized a food delivery service (and the actual house) as well as grant funding. The venture capital/financial services firm 6ixth Event has even given them a grant, which the two founders hope to use to provide financial aid for the house’s other renters. The Garden also has hopes of providing financial support for their projects and ideas. And they’re also planning an online platform, where an ever-growing community of their hacker house alumna can stay in touch, creating a lasting network of friends and mentors.

@enter_thegarden is an all female hacker house in SF this summer! Was literally jumping up and down hearing about it. About time!!

But beyond that, they see an even grander vision: scaling globally. Bassan envisions a day where they’re offering their co-living experience “completely free or very low cost.” They’d expand and expand, into as many cities and countries as possible, ultimately creating a global community of women “who want to live and build together.”

So while they’re starting in June with a single hacker house, Bassan tells me “We have a lot of exciting things we’re working on which we can’t share yet but encourage everyone to stay tuned…!” But already the Garden’s website seems to recognize that the import of this moment will ripple far beyond San Francisco.

“This is the beginning of something beautiful…

“The pilothouse is the beginning of a lasting community that will cultivate the next generation of strong female leadership.”