SAP Relies on Cloud Foundry, Kubernetes so Users Can Fire up Databases at Will

SAP, one of the world's largest software providers, expands its reliance on Cloud Native platforms and Kubernetes, lending credence to claims the software industry’s widening adoption of Kubernetes might live up to its early promise — or as some say say — hype.
Oct 9th, 2019 11:16am by B. Cameron Gain 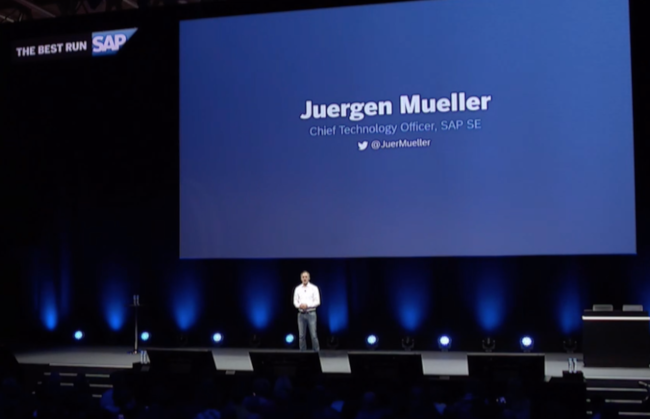 SAP, one of the world’s largest software providers, expands its reliance on cloud native platforms and Kubernetes, lending credence to claims the software industry’s widening adoption of Kubernetes might live up to its early promise — or as some say — hype.

SAP’s latest Kubernetes move consisted of new additions to HANA Cloud’s database capabilities it unveiled this week during the SAP TechEd 2019 conference in Barcelona. The software, beginning by end of year, will run on cloud Foundry services and microservices as well as Kubernetes clusters, SAP executives said during the conference.

SAP Chief Technology Officer and Executive Board Member Juergen Mueller described during the conference’s keynote the importance of the HANA Cloud enhancements — without mentioning Kubernetes specifically — the importance of HANA in terms of how most SAP applications now run on HANA. “This is why we are working on embedding more SAP Analytics Cloud [options] in even more SAP solutions,” Mueller said.

SAP also plans to continue to support and contribute to the Cloud Foundry as a way to help improve its underlying cloud native infrastructure in support of its software running on Kubernetes on the cloud, thus indirectly helping to improving users’ experiences when using HANA Cloud.

“We need to help improve Cloud Foundry,” Grassl said. “That is why we will continue to contribute to and support the project.”

“In the past, it was like, ‘okay, you had your instance with HANA installed somewhere on it,” Grassl said. “Now, if you have more requirements and need a bigger instance, you can go to the configuration and scale it up or down directly. That’s the big announcement.”

For DevOps teams, SAP is hoping to make HANA Cloud easier to manage and more flexible, increasingly thanks to the Kubernetes and microservices underlying layers. For simplicity, SAP says it seeks to lessen the load of database programming, management and storage by offering what it calls a “virtual interactive access layer” across an organization’s entire database — depending on users’ security layer access — with a single query engine.

One of the resulting advantages for developers is HANA Cloud serves as an “in-memory” database and data management platform, Grassl said. HANA Cloud thus assumes “many of the data-management aspects” for developers, Grassl said. These include not having to configure database indices or “complex queries consisting of say, for example, millions of data points with search query results generated in milliseconds,” Grassl said.

Ultimately, the cloud offering is largely intended to boost DevOps’ access times to data, whether accessing data that is one or five years old without having to change, for example, the underlying search query code or perform other database configuration or management tasks. “HANA Cloud is becoming much more transparent for developers since it can be configured on the cloud,” Grassl said. In other words, as another example of what cloud native platforms can offer, DevOps can access and change search queries and database access directly through a single API, while gone are the days when such a project would consist of the long and cumbersome tasks of reinstalling or provisioning database servers on-premises in data centers.

“There is now just that much more flexibility,” Grassl said.

Cloud Foundry Foundation and The Cloud Native Computing Foundation (CNCF) are sponsors of The New Stack.

BC Gain’s obsession with computers began when he hacked a Space Invaders console to play all day for 25 cents at the local video arcade in the early 1980s. He then started writing code for very elementary games on the...
Read more from B. Cameron Gain
SHARE THIS STORY
RELATED STORIES
Kubernetes App Deployment from the Command Line What LaunchDarkly Learned from 'Eating Its Own Dog Food' 4 Cloud Security Considerations for Financial Services Firms I Need to Talk to You about Kubernetes GitOps Crossplane: What Most People Get Wrong (and How to Get It Right)
TNS owner Insight Partners is an investor in: The New Stack.
SHARE THIS STORY
RELATED STORIES
Agent-Based vs. Agentless Security: Which Approach Is Better? Kubernetes Needs to Take a Lesson from Portainer on Ease-of-Use Docker Swarm, a User-Friendly Alternative to Kubernetes The Top 4 Threats to Securing Your Cloud Infrastructure Microsoft Makes Azure Load Testing Generally Available
THE NEW STACK UPDATE A newsletter digest of the week’s most important stories & analyses.
The New stack does not sell your information or share it with unaffiliated third parties. By continuing, you agree to our Terms of Use and Privacy Policy.