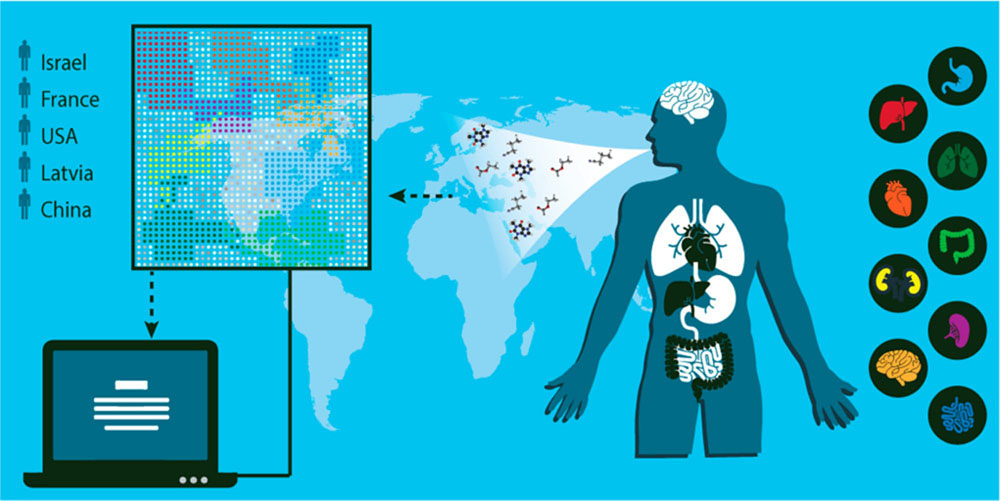 As you may know, breathing keeps us alive and well-oxygenated. But our breath — or at least the chemical composition of it — may also hold clues to any diseases that we might be suffering from. That’s according to an international team of scientists that have developed a device capable of analyzing a person’s breath for the unique chemical signatures of 17 diseases, using an “artificially intelligent nanoarray” made out of carbon nanotubes. The findings point to a cheaper, quicker and non-invasive method of medical diagnosis that is also surprisingly accurate.

The study, published in American Chemical Society Nano, describes how the team screened for the presence of 13 volatile organic compounds (VOCs) in the breath of 1,404 participants that were either healthy or had already been previously diagnosed with a medical condition. Using this information, the scientists were then able to identify the distinct “breathprints” of diseases like lung, colorectal, ovarian and kidney cancer, irritable bowel syndrome, multiple sclerosis, pre-eclampsia and Parkinson’s, to name a few. Watch the scientists explain how they were able to detect multiple diseases through the breath:

Surprisingly, the idea of using the breath to diagnose disease is not new. Greek physician and the father of modern medicine Hippocrates pointed to the link between anomalies in the breath and disease as far back as 400 B.C., while healers of ancient times sometimes diagnosed illnesses by smelling a patient’s breath, sweat, or stools.

The science behind the practice is pretty straightforward: A sample of exhaled human breath contains not only the primary constituents of oxygen, nitrogen, carbon dioxide and water vapor, but also varying trace levels of volatile organic compounds, which are by-products of metabolic processes of the body.

“Each of these diseases is characterized by a unique fingerprint, meaning a different composition of these 13 chemical components,” said professor Hossam Haick of the Technion-Israel Institute of Technology and one of the study’s lead researchers, in the video. “Just as each of us has a unique fingerprint that distinguishes us from others, each disease has a chemical signature that distinguishes it from other diseases and from a normal state of health. These odor signatures are what enables us to identify the diseases using the technology that we developed.” 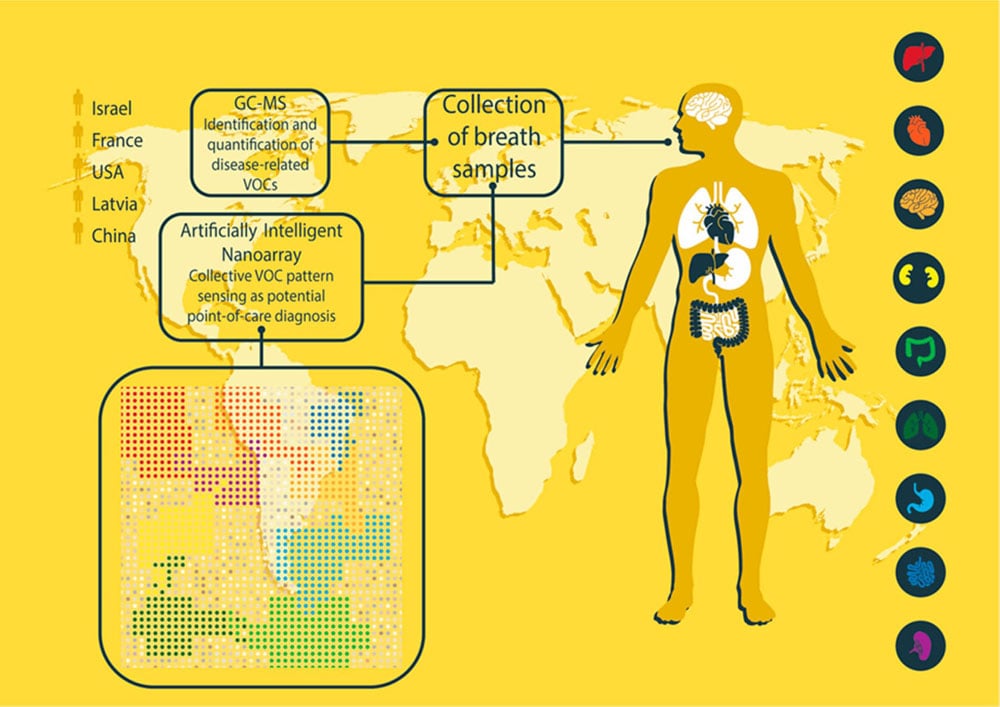 The breathalyzer device’s nanoarray consists of layers of molecularly modified gold nanoparticles and a sensor network made of carbon nanotubes. The nanoarray is designed to be chemically resistive to different volatile organic compounds that might be present in a breath sample.

Readings were analyzed with machine learning algorithms, which took into account variables like gender, age, smoking habits and geographic location. Using gas chromatography and mass spectrometry to independently cross-validate the nanoarray’s results, the team found that their device had an accuracy rate of 86 percent overall.

Teaching the System to Recognize ‘Breathprints’

Haick likens the nanoarray to a dog’s nose, and the algorithms to its brain. “We can teach the [artificial intelligence] system that a breathprint could be associated with a particular disease,” explained Haick on Smithsonian.com. “It works in the same way we’d use dogs in order to detect specific compounds. We bring something to the nose of a dog, and the dog will transfer that chemical mixture to an electrical signature and provide it to the brain, and then memorize it in specific regions of the brain. [..] This is exactly what we do. We let it smell a given disease but instead of a nose we use chemical sensors, and instead of the brain we use the algorithms. Then in the future, it can recognize the disease as a dog might recognize a scent.”

While the team isn’t the first to explore how breath might help diagnose disease — some breathalyzer prototypes to identify single diseases like diabetes and melanoma have also been recently developed — this is the first study to develop a relatively reliable diagnostic tool that can identify multiple diseases.

“This is a new and promising direction for diagnosis and classification of diseases, which is characterized not only by considerable accuracy but also by low cost, low electricity consumption, miniaturization, comfort and the possibility of repeating the test easily,” said Haick.

For patients, it could mean a move away from more invasive diagnostic procedures like biopsies, and for healthcare providers, it would mean greater ease of use without severely compromising accuracy. The chances of early diagnosis are increased, therefore leading to healthier outcomes overall.

But perhaps the greatest strength of the system is that it could also be trained to be used in non-medical applications, such as sniffing out explosives or detecting when food is unsafe to eat. In any case, it promises to be useful tool.

SHARE THIS STORY
RELATED STORIES
Seeing the Big Picture with AIOps Meta's MultiRay, a ML Platform for Running Large Foundational Models 'Common Sense' Test Could Lead to Smarter AI A Better Developer Experience Requires Better Testing Tools Explore or Exploit? Trivago's ML for New Recommendations
SHARE THIS STORY
RELATED STORIES
How COBOL Code Can Benefit from Machine Learning Insight This Tool Defends AI Models Against Adversarial Attacks Monoliths to Microservices: 8 Technical Debt Metrics to Know Why Cloud IDEs Are Shifting to a Platform-as-a-Service Model Seeing the Big Picture with AIOps
THE NEW STACK UPDATE A newsletter digest of the week’s most important stories & analyses.
The New stack does not sell your information or share it with unaffiliated third parties. By continuing, you agree to our Terms of Use and Privacy Policy.