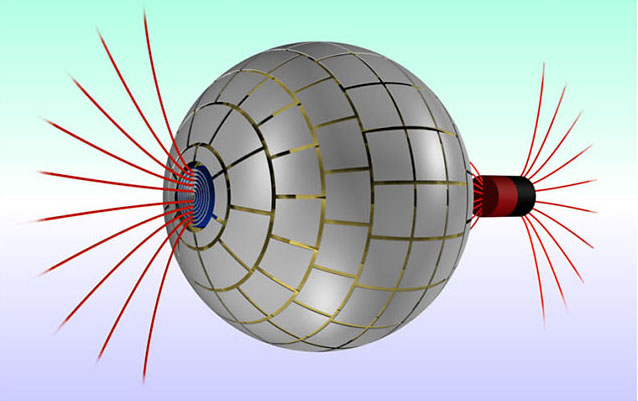 Science fiction fans are probably familiar with wormholes, those shortcuts through the space-time fabric that have allowed characters in popular television series like Star Trek to travel great distances through space in the blink of an eye. Though they have been mathematically predicted by scientists like Albert Einstein, wormholes currently exist only in theory as we’ve yet to actually find one.

But this small detail hasn’t deterred researchers from the Autonomous University of Barcelona in Spain from developing a device that generates what they are calling a “magnetic wormhole.” It technically isn’t a passage that connects two different points on the topography of space and time, but invisibly ‘tunnels’ magnetic fields through space. Study co-author Jordi Prat-Camps explains:

The study, recently published in “Scientific Reports,” expands upon a 2007 study that introduced the possibility of light-based “cloaking” devices that could hide electromagnetic waves as they pass through, rendering them undetectable.

Magnetic Cloak Made From Metamaterials

To accomplish what previously seemed impossible, the Spanish researchers describe how they took another approach to the problem, constructing a gadget out of metasurfaces and metamaterials — engineered materials that have properties not usually found in nature: “Instead [of designing a wormhole based on transformation optics], we take advantage of the possibilities that magnetic metamaterials offer for shaping static magnetic fields. Magnetic materials naturally exist with extreme magnetic permeability values ranging from zero — superconductors — to effectively infinity — ferromagnets — through many intermediate values. Metamaterials built from different combinations of them have enabled the realization of magnetic cloaks and other devices for shaping magnetic fields.”

The experiment used ferromagnetic metal to create a “magnetic hose,” consisting of a sheet of highly permeable mu-metal that folds upon itself in a spiralling, cylindrical form.

The hose, which sends the magnetic field from one end to the other, is encased in two spheres that work together to camouflage the magnetic field’s activity. The inner sphere is made of a superconductive yttrium barium copper oxide material (seen in yellow), which distorts the magnetic field as it is funneled through the hose. The second, outer spherical layer is made of thin plates of ferromagnetic mu-metals (seen in grey) — similar to those used to shield electronic devices — which are arranged in a way that effectively cancels out any magnetic distortion generated by the superconducting shell.

Since high-temperature superconductors need low temperatures to work, the device was then immersed in a bath of liquid nitrogen prior to operation. During testing, it appears as if the magnetic field enters in, disappears and reappears out of nowhere, its passage hidden but ultimately connecting two regions of space magnetically. 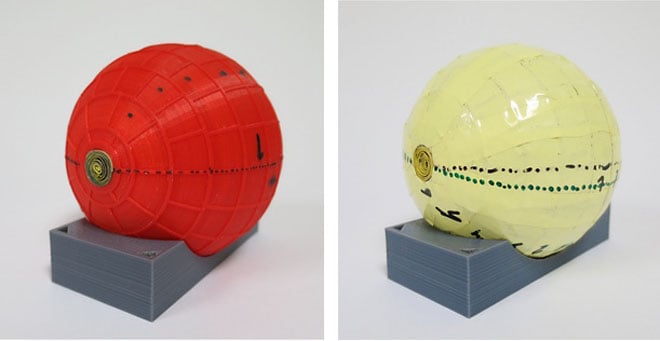 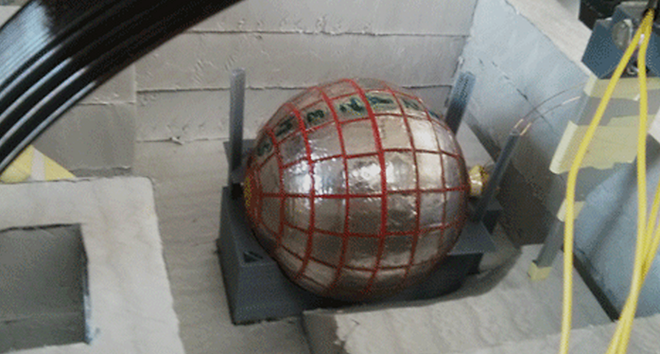 Though the experiment doesn’t transport matter between distant destinations, these apparently orphaned, “isolated magnetic monopoles” don’t occur naturally, prompting the scientists to make an analogy to the gravitational wormholes theorized by Albert Einstein and Nathan Rosen. Like these hypothetical space-time bridges, this device seemingly “changes the topology of space, as if the inner region has been magnetically erased from space,” says lead researcher Àlvar Sánchez.

While a magnetic wormhole might not seem as mind-blowing as its theoretical cousin, the researchers believe that magnetic cloaking devices can be useful. For example, they could be further developed into more advanced, and less claustrophobic versions of magnetic resonance imaging (MRI) machines, where a patient doesn’t need to be enclosed inside an enclosure for scanning. Rather, diagnostic images of a patient could be taken in an open space, using a strong magnet some distance away. So while we haven’t found nor created a real wormhole yet, beyond that, there’s no doubt there will be many other unforeseen applications and profound insights stemming from this new discovery, potentially paving the way for a deeper understanding of how our universe might work. More over at Autonomous University of Barcelona in Spain and “Scientific Reports.”