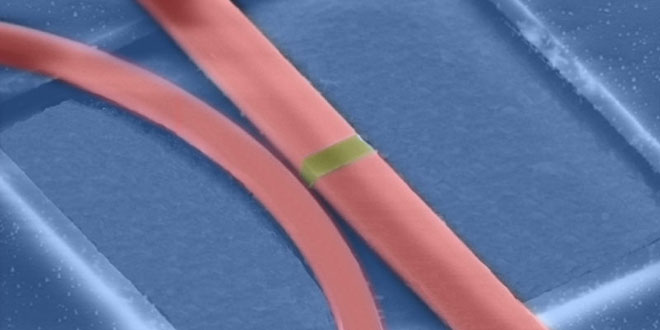 Scientists have developed a chip that uses photons of light, rather than electrons, to carry and store data at lightning speeds. Will computing as we know it change forever?

Experts are noting that modern computer architectures will soon be reaching design limits, whether it’s due to the restrictions of silicon-based semiconductors, or the relatively slow speeds and heat generated by colliding electrons as they carry data between a computer’s processor and its memory. Even with multi-core processors, data still can’t be transferred fast enough due to a shared bus between the CPU and data memory, a limiting phenomenon known as the Von Neumann bottleneck.

But all this may change if electrons are replaced by extremely fast photons of light — both as a way to transfer data between processor and memory and as a method of storage. Previous experiments have shown that light-based memory chips are possible, but the problem is with data storage itself, as optical memory can be “volatile,” in that it usually requires continual power to store data. Turn off the power, and you lose your data.

Now, scientists at Oxford University, the University of Münster, the Karlsruhe Institute of Technology and the University of Exeter appear to have taken a major step in solving this dilemma. In a study published in “Nature Photonics,” they describe what they are calling the world’s first “all-photonic, non-volatile, multi-level” memory chip, using a phase-change alloy material of germanium-antimony-tellurium (Ge2Sb2Te5 or GST) — the same stuff that’s used in rewritable CDs and DVDs. 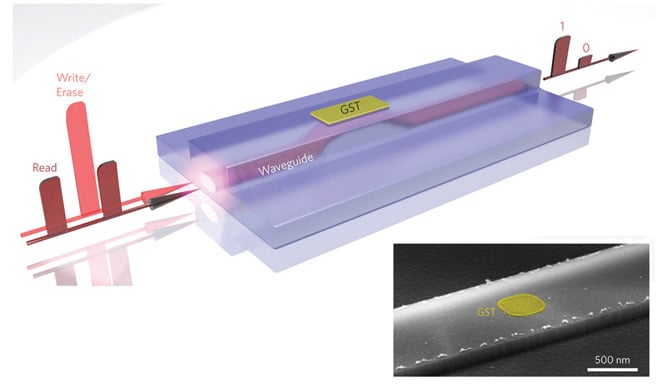 Here’s how it works: a small piece of GST is placed on top of a silicon nitride ridge called a “waveguide.” Acting like a fiber optic cable, the waveguide carries pulses of light that will cause the GST to change its state. Strong pulses of light will cause the GST to melt slightly and assume a disordered, “amorphous” state structurally, while weaker pulses will result in the GST taking a more ordered, “crystalline” state. When another low-powered light pulse is sent through the waveguide, the differences in these states can be measured and translated as “on” or “off” — similar to the binary one-or-zero system.

What’s even more interesting was the team’s use of “wavelength multiplexing,” where different wavelengths of light are sent through the waveguide simultaneously, to allow data to read and written by one pulse of light, at the same time. In theory, it could mean that thousands of bits could be read and written at once, offering nearly unlimited bandwidth, and potentially eliminating the bottleneck problem. 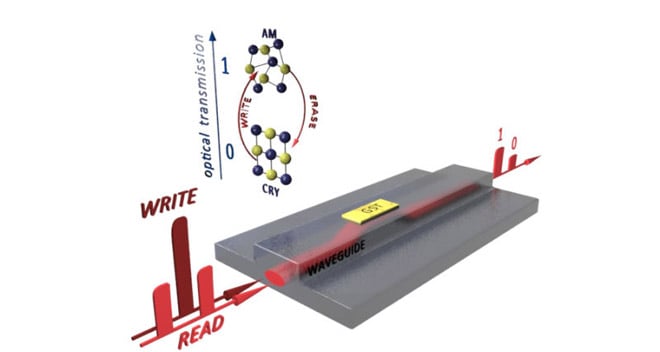 Not only would this simultaneity speed things up considerably, researchers have found that different intensities of repeated, strong light pulses can establish a mix of amorphous and crystalline states within the GST — eight distinguishable states of composition to be exact. This is a huge leap from the dual-state constraints found in binary system of data storage, and could mean that several states can be simultaneously stored in a single bit of memory. Moreover, the team hypothesizes that computations could even be performed by the memory itself, rather than having to be sent to the processor.

Besides these improvements, other significant advantages to this new form of optical memory include the fact that a continual power supply is not needed to keep the data permanently in memory, and it uses a relatively long-lived material that has many decades of research behind it.

“This is a completely new kind of functionality using proven existing materials,” explains Professor Harish Bhaskaran of Oxford University and one of the study’s supervisors. “These optical bits can be written with frequencies of up to one gigahertz and could provide huge bandwidths. This is the kind of ultra-fast data storage that modern computing needs.”

Of course, there are still some kinks to work out. While the team’s prototype is pretty small, measuring only one square micron, this is ginormous compared to much smaller components of silicon chips. But the team is undaunted, and are working to shrink their photonic chip, in addition to developing a new kind of electro-optical interconnect that will directly interface it to other computer components, using light instead of electrons. If the team is successful, it may usher in a new era of light-speed computing where these photonic memory chips and processors would run a blistering 50 to 100 times faster than today’s versions — meaning that the already existing vast ocean of electronic data will no doubt reach further, unimaginable rates of information growth and transmission.

Read more over at Oxford University and “Nature Photonics.”

SHARE THIS STORY
RELATED STORIES
Presto: Data Analytics on an Open All-SQL Platform Hybrid Data Collection from the IoT Edge with MQTT and Kafka Machine Learning Is as Easy as an API, Says Hugging Face Processing Large Data Sets in Fine-Grained Parallel Streams with SQL Is the Answer to Your Data Science Needs Inside Your IT Team?
SHARE THIS STORY
RELATED STORIES
Enterprise Blockchain Is Doomed NASA and IBM to Speed AI Creation with New Foundation Models Why So Many Organizations' Artificial Intelligence Initiatives Fail Let SQL Do All the Work: User Defined Functions Get Started with Text Classification
THE NEW STACK UPDATE A newsletter digest of the week’s most important stories & analyses.
The New stack does not sell your information or share it with unaffiliated third parties. By continuing, you agree to our Terms of Use and Privacy Policy.