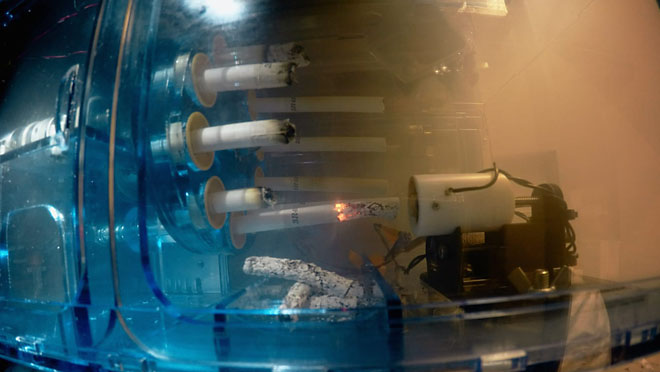 As the robot revolution rolls on, it’s prompting many to muse on the possibility of a robot takeover of jobs, though it’s clear that the robot-assisted future is already here. Nevertheless, there are some pretty compelling benefits to machines outperforming humans in certain fields.

Take medical research, for starters. Current research methods have their limitations: practices like animal testing and cell cultures can be time-consuming, expensive and aren’t very effective at faithfully capturing the complex dynamics at work within the human body — and that’s where specially designed machines could be the answer.

One instance of this new kind of research can be found in what are called organs-on-chips — devices that bio-mimic the mechanical and biochemical attributes of human organs like the liver, heart and lungs. In a paper published recently in Cell Systems, a team of scientists from Harvard University’s Wyss Institute studying the long-term effects of cigarette smoking describe their experiments with an automatic smoking machine outfitted with a “lung-on-a-chip,” lined with real human lung cells. The machine has also been engineered to breathe and smoke cigarettes like a human would — up to 10 at a time — even lighting them up on its own.

So why go to the trouble of building this chain-smoking machine instead of relying on animal testing or cell cultures? Though it’s a well-known fact that cigarette smoking is a major cause of lung disease, accurately modeling the negative effects of cigarette smoking-related diseases is more difficult than one might think. Traditional cell cultures using material sourced from human lungs may be a start, but these static cell cultures won’t mimic the overall effects of cigarette smoke filling the whole lung as it dynamically moves on a deep inhalation, taking a long pull from a cigarette. Testing the effects of smoking on animal test subjects like rats aren’t necessarily analogous to a human scenario, since rats breathe through their noses and have different physiological responses to the negative effects of smoking.

The team’s smoking bot is capable of not only lighting up on its own, it also has a programmable “micro-respirator” that closely imitates the different intensities of inhalation and exhalation of the human lung, as it draws in intervals of both cigarette smoke and fresh air to  flow over the lung-on-a-chip. 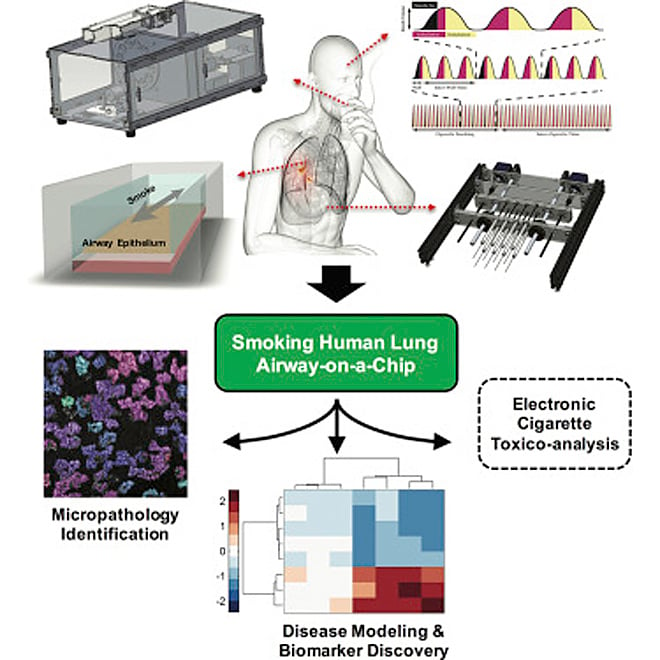 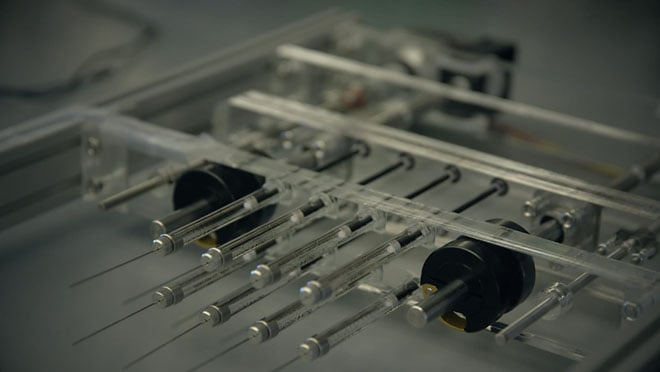 A microrespirator sucks in fresh air and smoke, much like a lung, to flow over the lung-on-a-chip.

The study’s “breathing lung chip” was fabricated using a technique borrowed from computer chip manufacturers. The chip has a hollow microchannel populated with living human cells taken from either healthy lungs, or patients with chronic obstructive pulmonary disease (or COPD — a lung condition that includes chronic bronchitis and emphysema). Separated by a porous membrane is another adjacent channel, which carries cell culture medium to nourish the lung cells for up to four weeks, creating a dynamic quite similar to that of a real airway in the human lung. 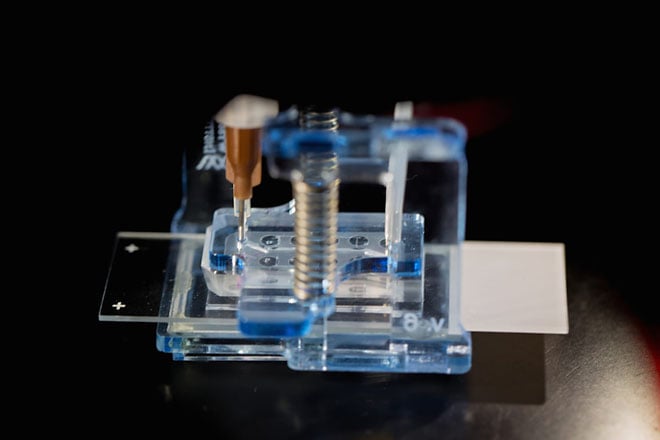 “The device enables us for the first time to compare responses of human small airway tissues, from both normal individuals and COPD patients, before and after they are exposed to cigarette smoke delivered through physiological breathing outside the human body,” explained Wyss founding director and study lead Donald Ingber. “We can now begin to decipher which cell types, cellular functions and genes contribute to smoke-induced injury in normal lung, as well as during COPD exacerbations in individual patients, and thereby, identify common as well as patient-specific disease factors.”

Even better, new products like electronic cigarettes (e-cigarettes), which are all the rage nowadays for people looking for alternatives to the ol’ cancer stick, can be more accurately tested for potential toxicity using the same concept, without scientists having to undertake the awkward task of somehow training lab animals to vape.

Thanks to this simple, cigarette-smoking robot and its micro-engineered lung-on-a-chip, variations in how the cigarette is smoked (puff duration, volume of smoke, etc.) can be better controlled in order to allow scientists looking to zero in on biological markers as smoking-related diseases unfold, long-term impacts, as well as effective treatments that may someday be personalized to the individual patient.

“The power of the technology is that it allows us to directly analyze the effect of a stimulus, in this case, smoke exposure, on lung in what might be thought of as an in vitro human ‘pre-clinical’ study,” explained Ingber. “This is hard to do in a standard human clinical study where one compares patients with a history of smoking versus those who do not smoke because all of the patients have different histories, backgrounds and patterns of exposure to the stimulus.”

Experiments like these push us to rethink what medical research will look like in the future, helping us to move away from comparatively less precise and less humane methods like animal testing. Moreover, we can also look forward to the day when Wyss scientists will develop a so-called “human-body-on-a-chip”, a system of linked organs-on-chips that will imitate how the human body works, hopefully ushering in a new age of medical research.