Like its biomemetic counterparts, biological computers could be one potential solution to the limits of silicon hardware. However, most of the DNA computers designed to date have been quite simple, in the sense that they could only solve the one task that they were tailored for, and could not be rewritten to solve other problems.
May 3rd, 2019 9:14am by Kimberley Mok 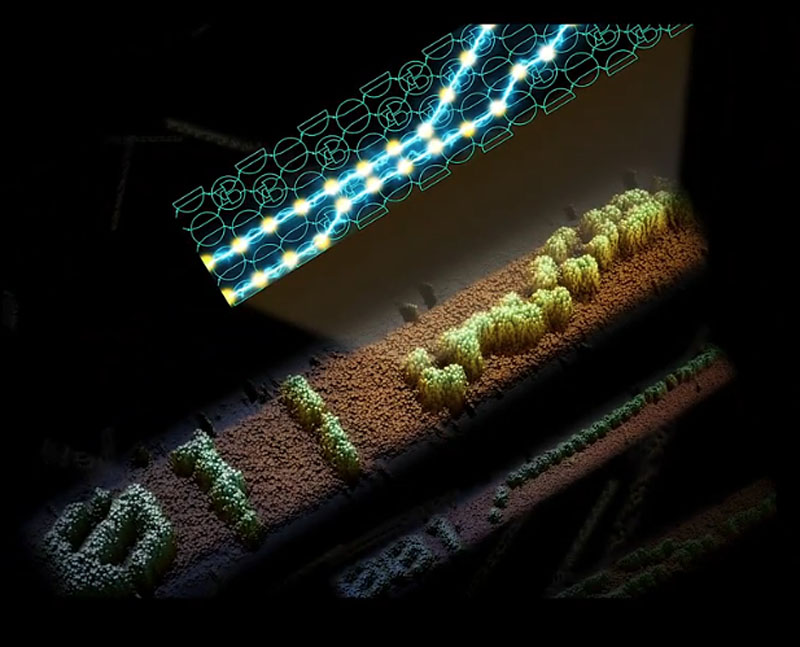 The practice of turning to nature for design inspiration — or better known as biomimicry — manifests itself in all kinds of places. In the world of cutting-edge technology, nature’s remarkable ability to solve engineering problems shines through in the adaptation of swarm technology for self-driving cars; slithery, amorphous surface robots that are based on amoebas and worms; and bird-like, foldable drones that can squeeze themselves into tight corners.

As one might expect, one can also translate lessons learned from nature and molecular biology to help tackle the computational challenges now being faced by silicon-based hardware. Like its biomimetic counterparts, biological computers could be one potential solution to the limits of silicon hardware. However, most of the DNA computers designed to date have been quite simple, in the sense that they could only solve the one task that they were tailored for, and could not be rewritten to solve other problems.

That is, until now. An interdisciplinary team of scientists from the California Institute of Technology, Harvard, Oxford, University of California Davis and Maynooth University has recently created the world’s first reprogrammable DNA computer, where the same chemical “hardware” can be reconfigured to run different “software” programs. Watch Damien Woods, professor of computer science at Maynooth University and one of the lead authors of the study, explain:

The team’s paper was recently published in Nature, and details how they used specially designed DNA  strands in a salt solution as the basis for their work. These DNA strands are similar to the transistors and diodes found on a computer microchip, but instead of using electrical currents for computations, it uses molecules and their inherent property of molecular self-assembly to perform tasks. In other words, the molecules that form these DNA strands will gradually adhere together to build larger and larger logic circuits, and as each strand is added on, part of the computation is simultaneously executed.

However, to get the system to become a multipurpose one that is capable of being reprogrammed, the scientists had to think out the box. To accomplish this, they created a set of 355 modular, single-stranded DNA “tiles” — designed to implement algorithms based on a 6-bit system (using a variable sequence of six 1s and 0s).

The beauty of the design is that these DNA tiles can be layered on top of one another and interlinked in order to complete the computation, knitting a kind of nano-scaled DNA “scarf,” where the resulting pattern indicates the output. To reprogram the “computer” to parse other algorithms, a different subset of DNA strands were used, out of a possible 700 that make up the system. 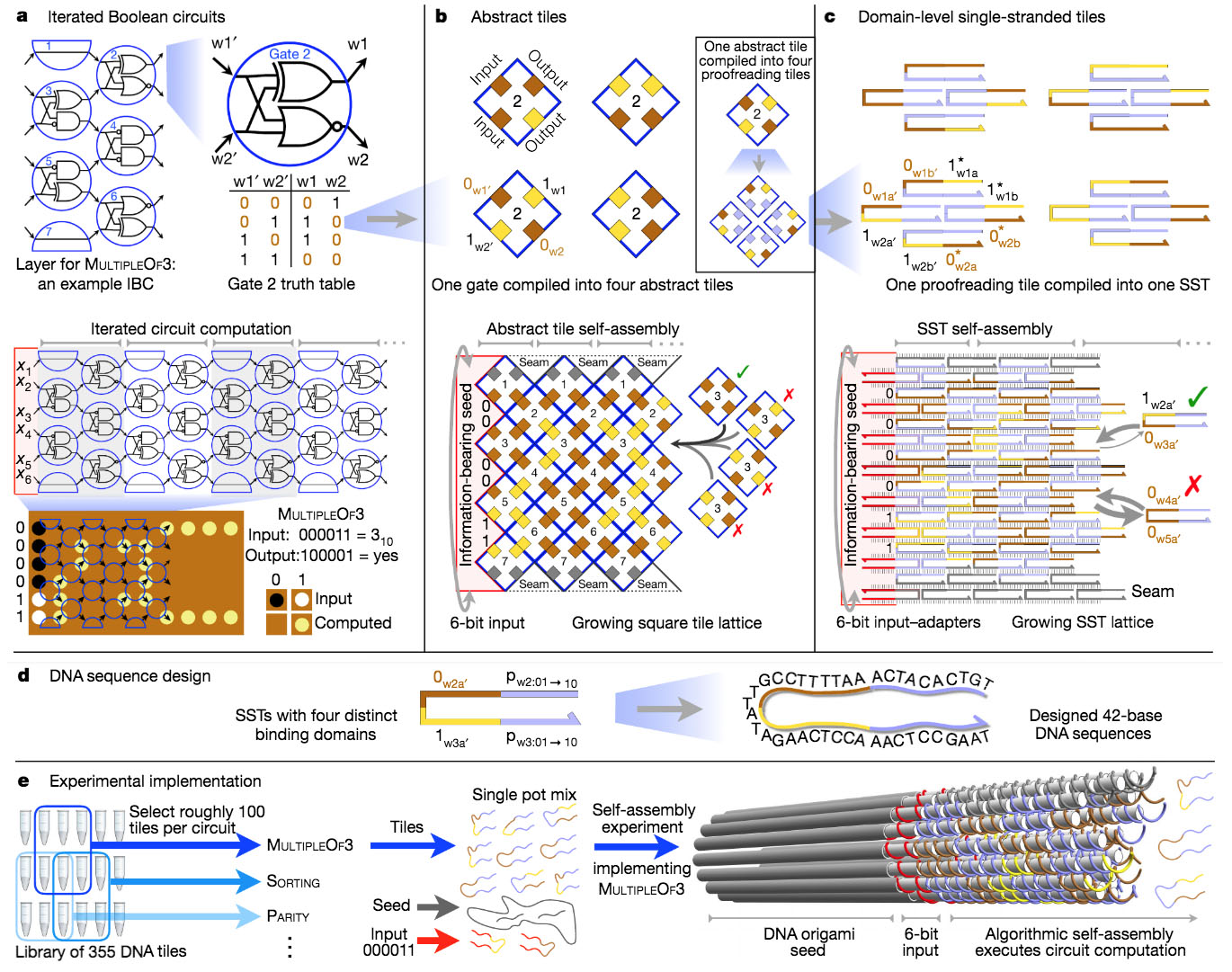 Design and implementation of the complete 6-bit DNA tileset.

“Think of them as nano apps,” said Woods in a press release. “The ability to run any type of software program without having to change the hardware is what allowed computers to become so useful. We are implementing that idea in molecules, essentially embedding an algorithm within chemistry to control chemical processes.”

To ensure that these DNA strands didn’t stick together randomly together in the salt solution, the team used DNA origami that is designed to fold itself into a 150-nm-long, 20-nm-wide nanotube. These nanotubes function as a kind of “seed structure” around which the DNA strands performing the computations could assemble around, and wherever there is a bit that equals to 1, a protein label would attach. These tubular, origami-like frameworks could then be unfolded and the computational sequence and the protein labels “read” under an atomic force microscope. 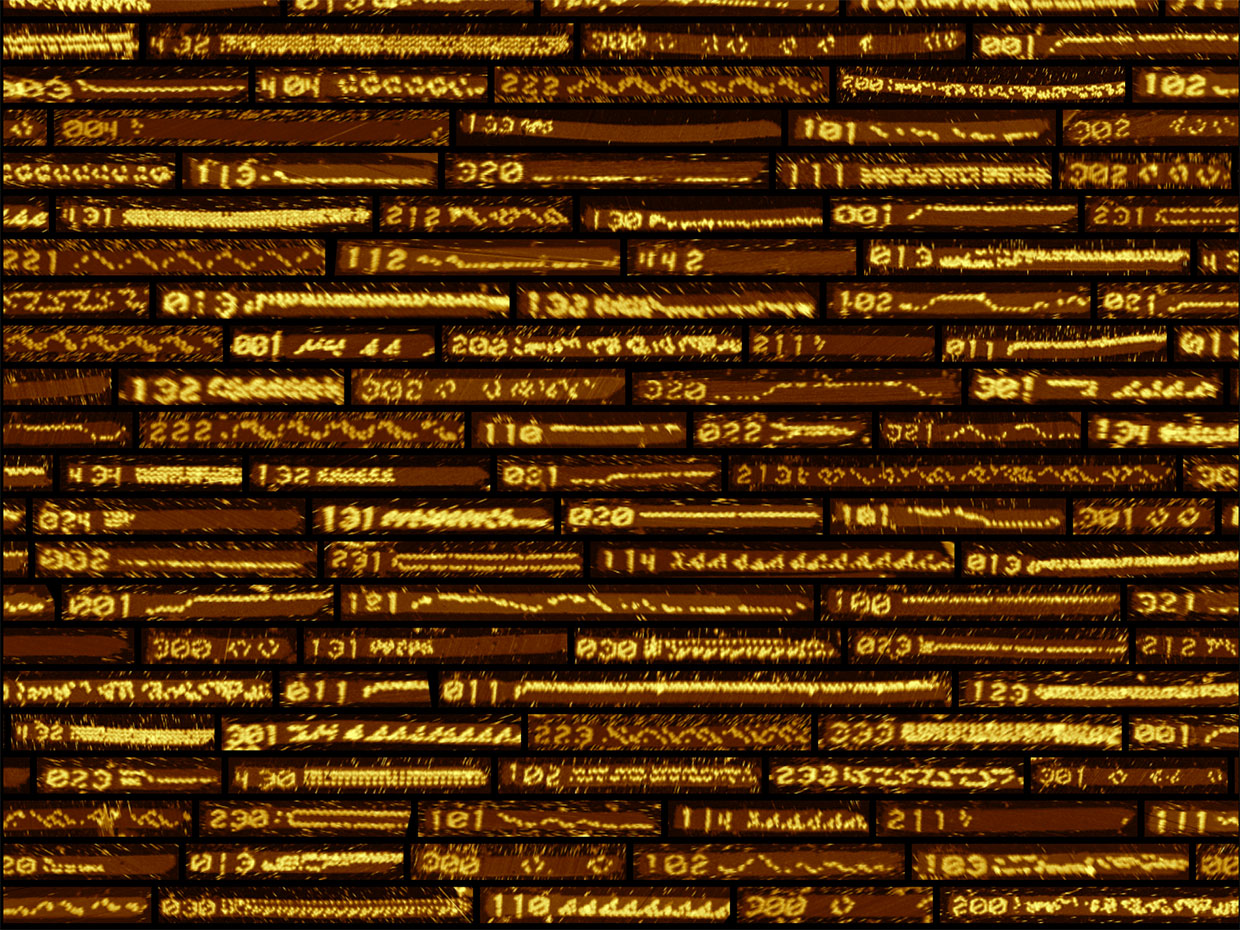 Utilizing this system, the team was able to run 21 different “programs” — such as random walks, counting to 63, or determining if a number was a multiple of three. Other programs involved the drawing of images like zigzags or diamonds on the DNA “scarves.” Though the scheme isn’t fast compared to conventional computer chips — it takes about two days for the DNA computer to run computations — the aim is to push the boundaries of what might be possible for DNA computing in the future. Combined with the time-tested ability of DNA to reliably store information for thousands of years, there may be the inklings of a new biotechnological paradigm here.

“These are rudimentary computations, but they have the power to teach us more about how simple molecular processes like self-assembly can encode information and carry out algorithms,” pointed out Caltech computer science and bioengineering professor and study co-author Erik Winfree. “Biology is proof that chemistry is inherently information-based and can store information that can direct algorithmic behavior at the molecular level.”

SHARE THIS STORY
RELATED STORIES
2022 in Review: AI, IT Armies, and Poems about Food 2023 Will Be the Year FinOps Shifts Left Toward Engineering How Not to Waste a Senior Hire Entrepreneurship for Engineers: Avoiding Feature Bloat Snack Stack: Turning Winter Comfort Food up to 11
SHARE THIS STORY
RELATED STORIES
How Jit Builds a Platform Engineering Mindset in the Cloud How Not to Waste a Senior Hire How Will Tech Jobs Change in 2023? Why Your Code Sucks: Common Excuses for Bad Programming How to Get Started Filling 3.4 Million Cybersecurity Jobs
THE NEW STACK UPDATE A newsletter digest of the week’s most important stories & analyses.
The New stack does not sell your information or share it with unaffiliated third parties. By continuing, you agree to our Terms of Use and Privacy Policy.