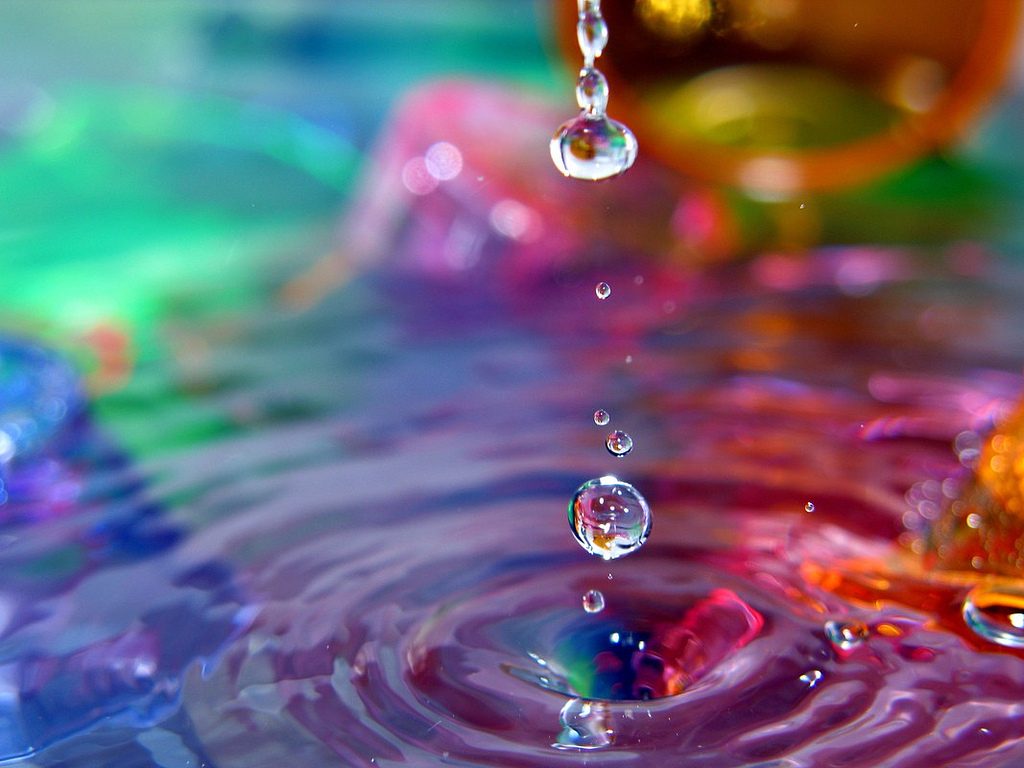 Feature image: “The faucet chronicals by DOD EMP FRANK LEON” by U.S. Army is licensed under CC BY 2.0.
Editor’s Note: This is part three of a multi-part series about software defined networking.  Other posts in the series can be found here.

NOX is the original OpenFlow controller. It serves as a network control platform, that provides a high level programmatic interface for management and the development of network control applications. Its system-wide abstractions turn networking into a software problem.

Before we dig deep, let me clarify on the NOX versions:

NOX — initially developed by Nicira Networks and now owned by VMware, along with OpenFlow — was first introduced to the community in 2009.  This was later divided into multiple different lines of development:

In this article, to maintain consistency, whenever I use the term NOX, I will be referring to the “new NOX.” The below table summarizes the differences between Nox classic and Nox.

NOX aims to provide a platform which allows developers and researchers the ability to innovate within enterprise networks in the form of developing novel applications. Applications on NOX typically determine how each flow is routed or not routed in the network.

Figure 1 below depicts the architecture of NOX. The NOX core provides helper methods, such as network packet process, threading and event engine, in addition to OpenFlow APIs for interacting with OpenFlow switches, and I/O operations support.

At the top, we have applications: Core, Net and Web. However, with the current NOX version, there are only two core applications: OpenFlow and switch, and both network and web applications are missing. The middle layer shows the in-built components of NOX. The connection manager, event dispatcher and OpenFlow manager are self-explanatory, whereas the dynamic shared object (DSO) deployer basically scans the directory structure for any components being implemented as DSOs.

I would like to highlight the fact that all the applications can be viewed as components and, as described in the last section, all applications inherit from the component class. Hence, NOX applications are generally composed of cooperating components that provide the required functionality. In short, a component encapsulates specific functionality that is made available to NOX. 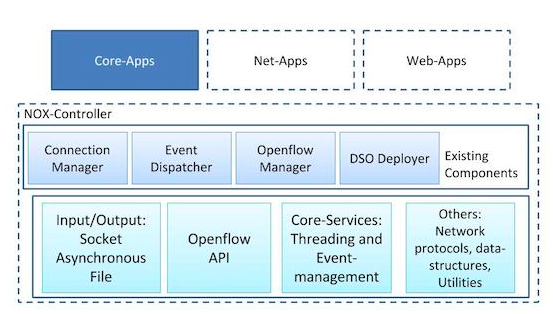 The event system is another important concept of the NOX controller.

An event represents a low-level or high-level event in the network. Typically the event only provides the information, and processing of that information is deferred to handlers. Many events roughly correlate to something which happens on the network that may be of interest to a NOX component. These components, typically, consists a set of event handlers. In this sense, events drive all execution in NOX.

NOX events can be broadly classified as core events and application events. The core events map directly to OpenFlow messages received by controlled switches, such as:

In addition to core events, components themselves may define and throw higher level events which may be handled by any other events. Though NOX does not contain any such application events, considering it has a minimal set applications, the NOX classic has various events such as host_event and flow_in_event by authenticator application, and link_event by the discovery application.

NOX must be invoked by the command line within the build/src directory. Generally, the command that starts the controller looks like this:

For instance, the following will initiate NOX, listening for incoming connections from OpenFlow switches on port 6633 (the Openflow protocol port):

At this point, the core of NOX is running; however, while switches can now connect to the controller, no behavior will be imposed on them by NOX.

NOX is intended to provide the control logic for an entire network, such as handling traffic engineering, routing, authentication, access control, virtual network creation, monitoring and diagnostics. However, NOX itself does none of these things. Rather, it provides a programmatic interface to network components which perform the useful functionality. So, what is missing from the above command in order to give life to a NOX network are the components NOX should run. For example, the following command:

will make the switches act as regular MAC learning switches.

Let us use the switch program (src/coreapps/) as an example of how to extend NOX. Switch is very simple application which does the following:

Accordingly the switch application will be interested in the following events:

Class switch provides an example of a simple component. All components must have the following construction:

To maintain the learnt MAC address the switch needs a table:

A component must inherit from a class component, have a constructor matching the hub’s constructor, and include a REGISTER_COMPONENT macro with external linkage to aid the dynamic loader.

Components must also have a meta.JSON file residing in the same directory as the component. On startup, NOX searches the directory tree for meta.JSON files and uses them to determine what components are available on the system and their dependencies.

The methods “configure” and “install” are called at load time — configure first before install — and are used to register events and register event handlers.

All of the applications will have following two important functions:

This function is typically responsible for registering for the necessary events. As mentioned above, switch registers for the three events using the below API:

These event handlers perform the necessary actions. handle_datapath_join and handle_datapath_leave updates the mac_tables appropriately. Whereas, the handle_packet_in performs the operations of learning the MAC address and adding the flow. The below table summarizes some important OpenFlow APIs used by this handler:

The operations to be carried out in the install function typically depend on the application. For example, some application may initiate any threads or any socket operations. In the switch application, install operation does not include any operation.

In summary, NOX is an open source, OpenFlow controller that provide a nice and simple platform for writing network control software in C++.

Sridhar received his Ph.D degree in computer science from National University of Singapore, in 2007; M.Tech. degree in computer science from KREC, Suratkal, India, in 2000; and B.E. degree in instrumentation and electronics from SIT, Tumkur, Bangalore University, India, in...
Read more from Sridhar Rao
SHARE THIS STORY
RELATED STORIES
Rethinking Web Application Firewalls There's a Nasty Security Hole in the Apache Webserver Confluent: Have We Entered the Age of Streaming? How to Overcome Challenges in an API-Centric Architecture AmeriSave Moved Its Microservices to the Cloud with Traefik's Dynamic Reverse Proxy
SHARE THIS STORY
RELATED STORIES
The Next Wave of Network Orchestration: MDSO How Bolt Scaled Remote Work with Tailscale's Zero Trust Mesh VPN Is Kubernetes the Next Fault Domain? HTTP/3 Is Now a Standard: Why Use It and How to Get Started Rethinking Web Application Firewalls
THE NEW STACK UPDATE A newsletter digest of the week’s most important stories & analyses.
The New stack does not sell your information or share it with unaffiliated third parties. By continuing, you agree to our Terms of Use and Privacy Policy.