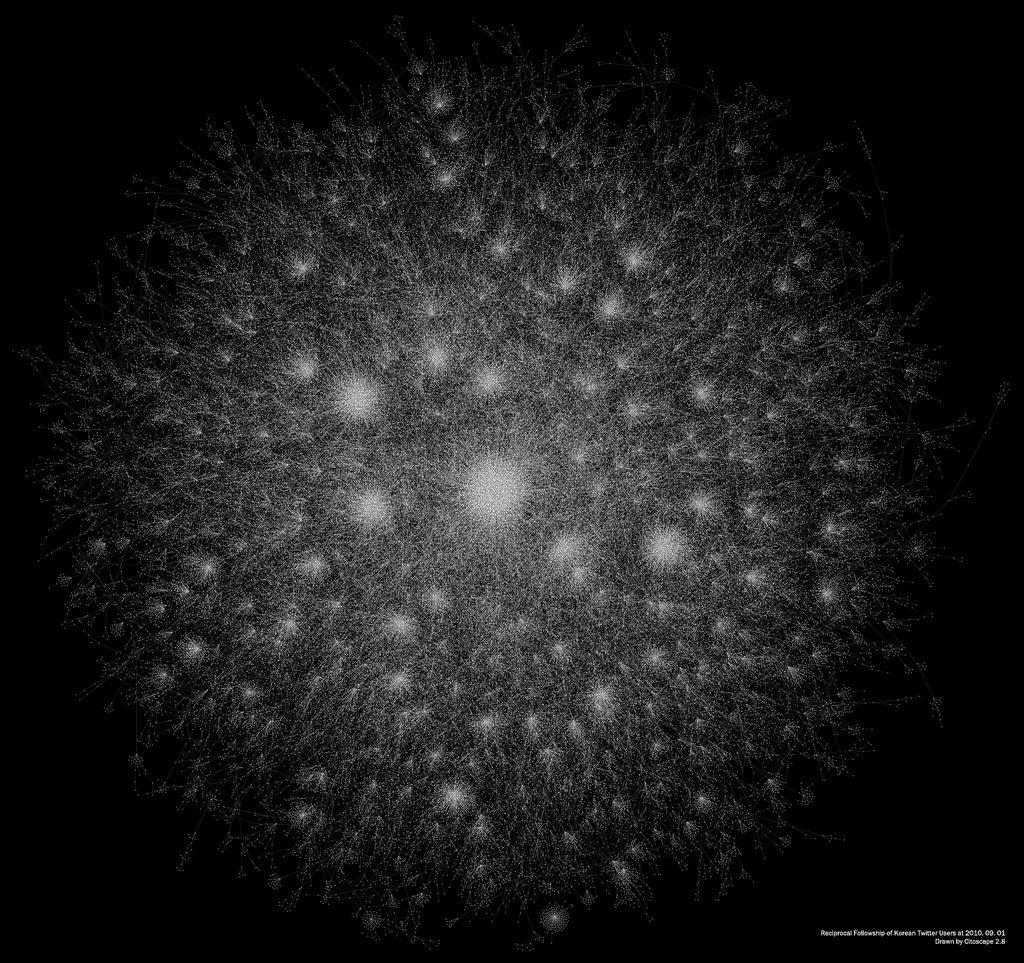 This is part five of a multi-part series about software defined networking.  Other posts in the series can be found here.

Beacon is an open-source SDN controller developed by David Erickson at Stanford, which we will not be covering in this series. Instead, in this part, we will discuss Floodlight SDN Controller that used Beacon controller as its foundation. However, there is no doubt that Floodlight, in comparison to Beacon, has grown leaps and bounds to be one the most popular open source SDN controllers with more than 15,000 downloads. Floodlight is also recongized as better with respect to features and performance.

Floodlight Controller, an Apache licensed, Java-based OpenFlow controller, is one of the significant contributions from Big Switch Networks to the open source community. Floodlight’s architecture is based on Big Network Controller (BNC), the company’s commercial offering. Applications written for Floodlight Controller by any developer can be made available for certification and qualification with BNC. Hence, as Floodlight is one of the core elements of the Big-Switch’s product(s), it would be fair to assume that the company will support it.

Just like many other controllers, when you run Floodlight, both northbound and southbound operations of the controller become active. That is, when you run the Floodlight, the controller and the set of configured module applications will run, too.  The northbound REST APIs exposed by all the running modules becomes available via the specified REST port. Any application can interact (retrieve information and invoke services) with the controller by sending http REST commands. On the other hand, at the southbound, the provider module of Floodlight will start listening on the OpenFlow-specified TCP-port for connections from the OpenFlow switches.

Floodlight, currently supports OpenFlow 1.0. Versions of 1.3 and 1.4 are in the pipeline. With an extensible Java development environment, and enterprise-grade core engine, Floodlight is both an easy to use and robust SDN controller. In the next section we’ll discuss the architecture and follow it with discussions about writing applications on top of the Floodlight Controller.

The term ‘modular architecture’ is used to describe the architecture of the Floodlight Controller, which is shown in the figure below.  The core architecture includes various modules, such as topology management, device/end-station management, path/route computation, infrastructure for web access (management), counter store (OpenFlow counters), and a state storage system, that are well stitched a by module-management system. Below we will describe some of the important components of the controller architecture. 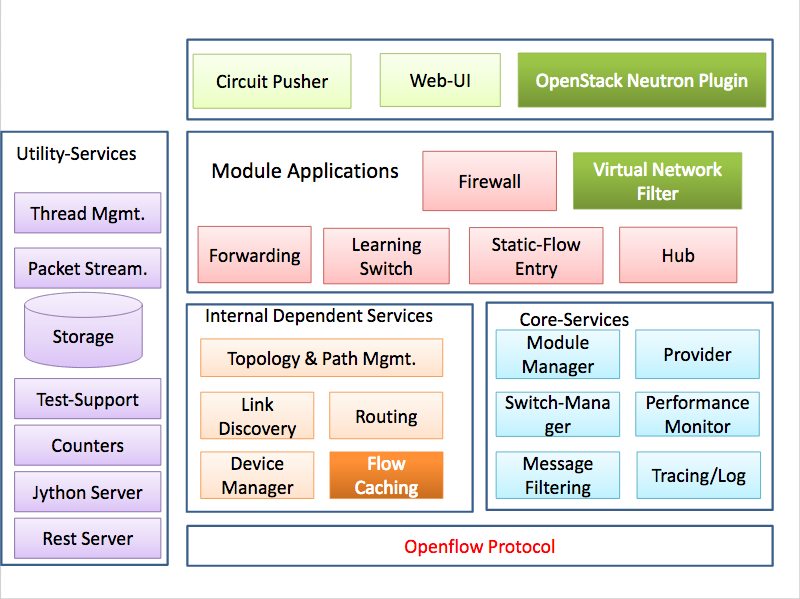 Floodlight comes with few applications that use the exposed REST APIs. Circuit Pusher utilizes floodlight rest APIs to establish a path between any two IP-addressable devices by adding flow-entries in all the switches that constitutes the path. In addition to circuit-pusher, Floodlight can be run as the network backend for OpenStack using a Neutron plugin. There are two main components to this solution:

A RestProxy to realize the connectivity between floodlight controller and OpenStack Neutron.

VirtualNetworkFIlter to realize the Neutron APIs. The VirtualNetworkFilter module, which implements L2-address based network isolation, is not dependent on OpenStack-Neutron, and can be activated via configuration file. However, the RestProxy plugin was designed to run as part of OpenStack’s Neutron service.

Floodlight includes multiple applications in its distribution, and below I’ll summarize a few. Typically, these applications are great place for a developer to understand the usage of APIs if he/she is interested in developing SDN-applications. This is true for all SDN controllers, and not just Floodlight.

The forwarding application, as name suggests, can forward packets between any two devices that may be connected via OpenFlow (or non-OpenFlow) switches. The learning-switch is same as what we had seen in NOX/RYU/Trema, whereas the hub application just floods any incoming packet to all other active ports.  The static-flow entry pusher just adds a OpenFlow flow entry (Match+Action) in any specified switch, using the flow-mod message of OpenFlow. The VirtualNetworkFilter, as described above is a MAC-Address based network slicing application. Finally, there is a firewall application to apply ACL (access control list) rules, which are nothing but set of conditions, to control (allow or deny) the traffic flow based certain set of policies.

An important point we need note about any SDN controller is that – the in-built services defines the capability of the controller, and these services are the ones that are used by the northbound-applications. Accordingly, Floodlight includes services ranging from discovering network states and events to enabling switch-communication support to utilities like storage, threads and web-UI. Below we will summarize some of the services

As mentioned earlier, Floodlight Controller is part of the Floodlight-project by BigSwitch network. Big Switch also provides an open source agent, named Indigo, that has been incorporated into commercial products. In addition, Big Switch has also provided Loxi, an open source OpenFlow library generator, with multiple language support to address the problems of multi-version support in OpenFlow.

As a development environment, Floodlight is fully Java-based. Build and debugging tools are available. In the next two sections, we will discuss Floodlight from the developer point of view.

Floodlight includes a RestAPI server, which uses the Restlets library.  With the restlets, any module developed can expose additional REST APIs through an IRestAPI service – typically, the modules that depend on REST server, expose APIs by implementing RestletRoutable in a class. The controller itself presents a set of extensible REST APIs, to get and set various types of information. The REST API is the recommended interface to develop applications utilizing Floodlight supported features.

Once the floodlight is up and running, one can use the APIs that are already supported in the controller. The Figure-3 summarizes various functions that are supported by the Floodlight. For example, the below curl command gets the switches that are connected to the controller with IP as 10.0.0.1. 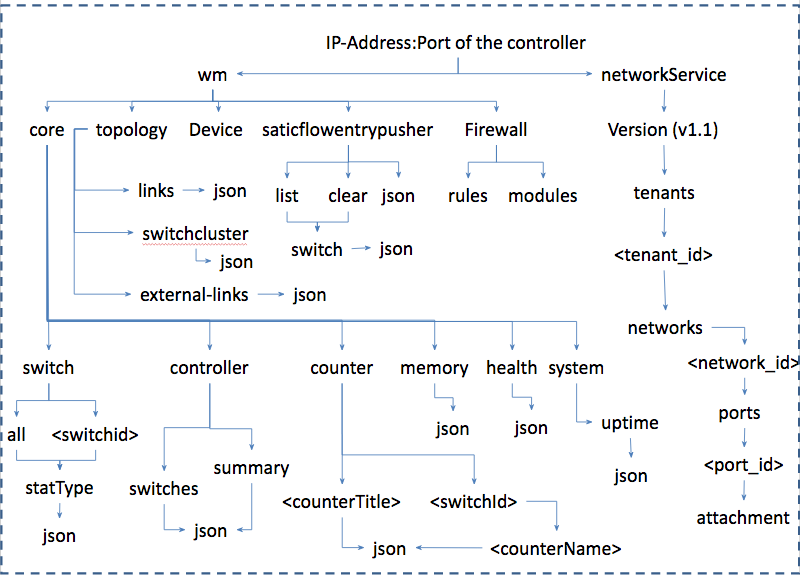 How to Write a Module in Floodlight:

In our previous articles, while describing the process of writing applications on top of SDN controller, we had taken a case-study and described it as a step-by-step process.  However, for Floodlight, there exists considerable amount of documentation for writing modules and adding services. Hence, in this article, we will just summarize the whole process in one simple figure. The readers can go through a specific example at [5,6,7]. 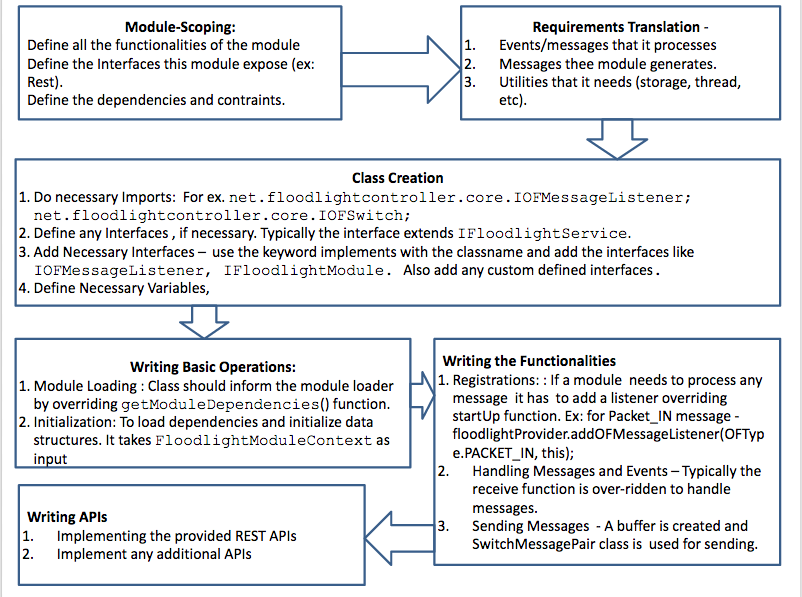 In summary, inspired from the Beacon, the OpenFlow-based FloodLight controller consists of rich set of modules, where each module provides a service that can be accessed through either a simple Java API or a REST API.