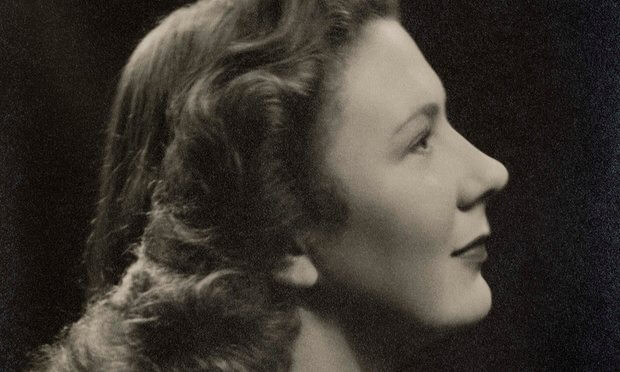 Jane Fawcett passed away last week, one of an elite group of British codebreakers in World War II.  For decades, no one knew that she was a hero. She had sworn not to tell. Her job was to reveal the secrets others had encrypted; it was a job she had to keep a secret, even from her family.

At the age of 19, Jane received a letter from a friend, encouraging her to come to Bletchley Park, Britain’s top-secret code-breaking facility where 12,000 people including mathematician Alan Turing, were decoding the secret messages of the German military’s Enigma machine. She was an aspiring ballet dancer when the war broke out.

Fluent in German and wanting to her part in the war effort, Jane joined her friend. Working in huts with no insulation and poor lighting, she toiled away decoding messages on wobbly trestle tables and collapsible chairs, alongside 8,000 other women, mostly drawn from the British upper classes.

Mavis Batey, a leading codebreaker, and Jane’s friend said Benchley was a place where “a girl of 19 with a bright idea would be encouraged to take it forward, long before any official equality for women.” 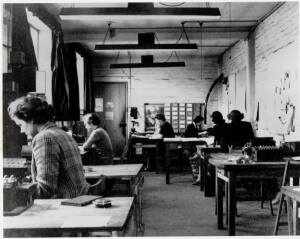 The codebreaker’s room at Bletchley Park

Michael Smith, in his 2015 book, “The Debs of Bletchley Park and Other Stories,” described the daily routine. When an Enigma code was broken, the keys to the code were passed along to the decoding room. Fawcett and other codebreakers would then plug the keys into her Typex machine, which was a replica of Enigma, and type out the encoded messages.

In May 1941, the British navy was searching for the Bismarck, Germany’s most formidable battleship. In a reply to a Luftwaffe general whose son was aboard the Bismarck, Fawcett read that the Bismark was headed to Brest for repairs.

A day later, the U.S. Navy spotted the battleship in the Atlantic Ocean, about 700 miles off the coast of Brittany, and far from Norway, where it was thought to be. The Bismark was sunk by the British Navy on May 27, 1941. More than 2,000 Germans were killed, and it is still considered a key victory in the war.

Fawcett worked at Bletchley Park for five years, turning to a career in opera at the end of the war. And told no one. Everyone in Bletchley Park was bound by Britain’s Official Secrets Act, which imposed a lifetime prohibition on revealing any code-breaking activities.

“My husband had been in the Navy and done all these heroic things in every quarter, so of course we all talked about him and those brilliant young adventurers who saved Britain — well, saved the world,” Mrs. Fawcett said last year. But she never mentioned her contributions to the war. 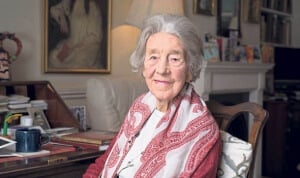 Jane Fawcett, after being outed as a hero

In 2014, Fawcett returned to Bletchley Park for the opening of a museum honoring the lives and work of the codebreakers. It was the first time she acknowledged her contributions. She found it hard to talk about after so many years.

“So when everything we had done, which we knew had been very hard work and incredibly demanding, suddenly showed its head and we were being asked to talk about it, it felt quite overwhelming. I’d never told a soul, not even my husband. My grandchildren were very surprised.”

After the war, she continued performing as an opera singer for the next 15 years. Over time, she settled into the role of mother and preservationist, working to save architecture from the Victorian era. Her passionate championing of saving buildings leading her to be called “the furious Mrs. Fawcett.” She even received an MBE in 1976 and was given an honorary fellowship of the Royal Institute of British Architects.

But the impact of her work at Bletchley Park might prove to be her most lasting legacy.

“They say we saved 40 million lives, by being in the right place at the right time, by having a job to do,” she said later.  “I still feel that what we did at Bletchley was the most significant thing we ever did in our lives.”

How long can you keep a secret?

TC Currie is a journalist, writer, data geek, poet, body positive activist and occasional lingerie model. After spending 25 years in software development working with data movement and accessibility, she wrote her first novel during National Novel Writing Month and...
Read more from TC Currie
SHARE THIS STORY
RELATED STORIES
Tech Works: How Can We Break Our Obsession with Meetings? The Power and Ethical Dilemma of AI Image Generation Models SRE Housekeeping: Where to Get Started for New Hires Golden Paths Start with a Shift Left Platform Engineering Won’t Kill the DevOps Star
SHARE THIS STORY
RELATED STORIES
How Jit Builds a Platform Engineering Mindset in the Cloud Entrepreneurship for Engineers: Avoiding Feature Bloat Java's James Gosling on Fame, Freedom, Failure Modes and Fun Snack Stack: Turning Winter Comfort Food up to 11 Linux Foundation Study Assesses 'Outsized' U.S. Influence on Open Source
THE NEW STACK UPDATE A newsletter digest of the week’s most important stories & analyses.
The New stack does not sell your information or share it with unaffiliated third parties. By continuing, you agree to our Terms of Use and Privacy Policy.