Self-folding Mini Origami Robots are the Nanosurgeons of Tomorrow 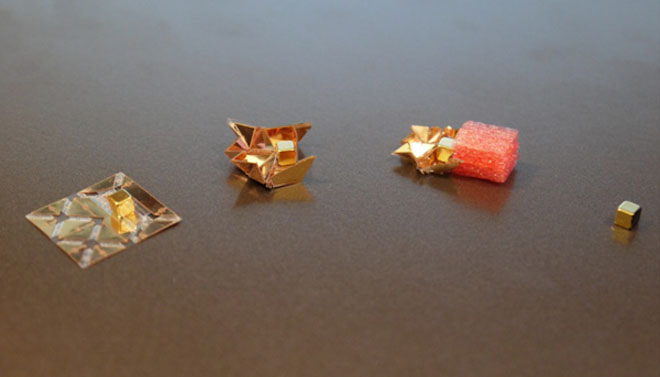 The art of paper folding, or as it is popularly known by its Japanese moniker, “origami,” has probably been around since paper was invented in the first century A.D. At first impulse, origami may seem like a relaxing hobby for the young and elderly, but its unassuming yet profound underlying concepts have been used in education; mathematics; medicine; architecture; and mechanical, civil and aerospace engineering.

Now, researchers from MIT and the Technical University of Munich have created what they call an “untethered, self-folding origami robot” that can walk, swim, dig and even dissolve away when it comes into contact with certain liquids. While previous robots have demonstrated the similar capabilities, this tiny self-folding robot is the first to have the option of disappearing completely. See it in action:

Unveiled recently at the International Conference on Robotics and Automation (ICRA) in Seattle, the battery-free, miniature robot measures only 1.7 centimeters square and weighs 0.31 grams. It is equipped with a neodymium magnet, and it moves in response to a magnetic field generated around it. It is constructed out of folded polyvinyl chloride (PVC), sandwiched between laser-cut structural layers made of either polystyrene or paper.

The researchers are exploring origami structures as an alternative to 4D printing, since these self-folding robots would only require a laser-cutting machine, or even a cheap vinyl cutter, to create. This method could offer a low-cost and more rapid way to fabricate robots, quickly creating compact and lightweight three-dimensional forms using two-dimensional sheets. 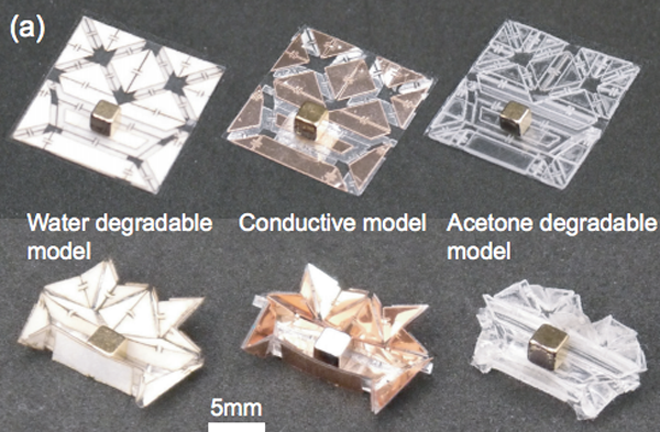 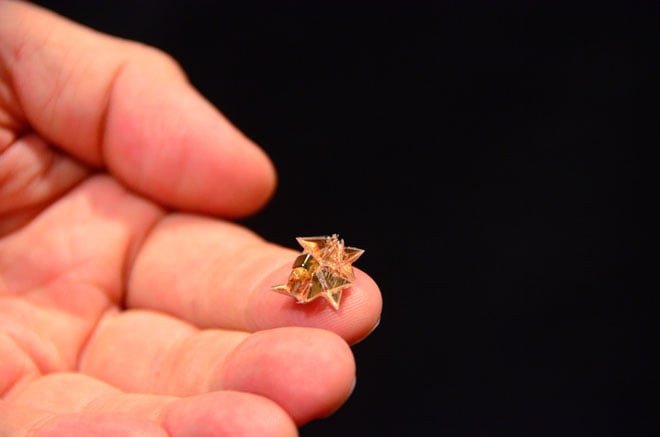 The robot begins in its unfolded, flat state. When it is placed on a heating element, it folds itself into shape in about a minute. This self-folding property is made possible by the precise cuts made by the laser-cutter into the structural layers; the PVC sandwiched in between is heat-sensitive, and will contract when exposed to heat. According to the study, the self-folding sheet used is capable of over 100 simultaneous bidirectional folds. 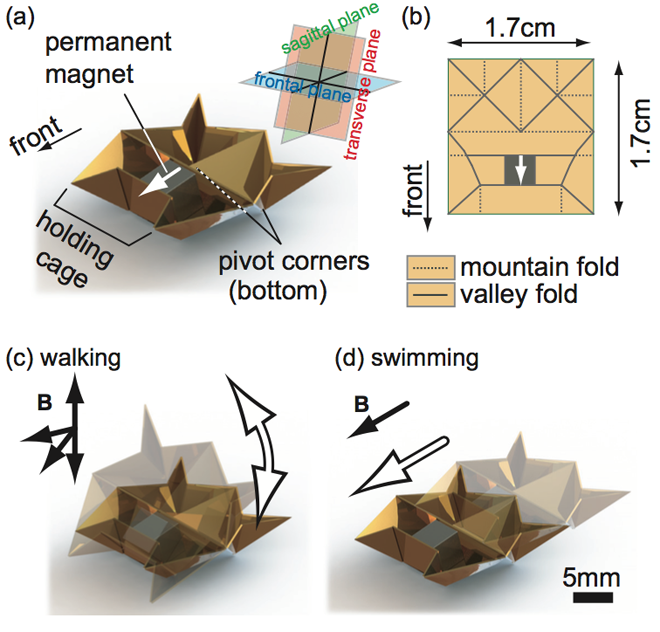 After folding itself around its own magnet, the now three-dimensional form is propelled into motion by a set of four electromagnetic coils, which generate a directional, but rapidly alternating, magnetic field at 15 hertz, causing it to oscillate and move forward. Movements are controlled by an Arduino Esplora, which handles the computations needed to modulate the magnetic field gradient. 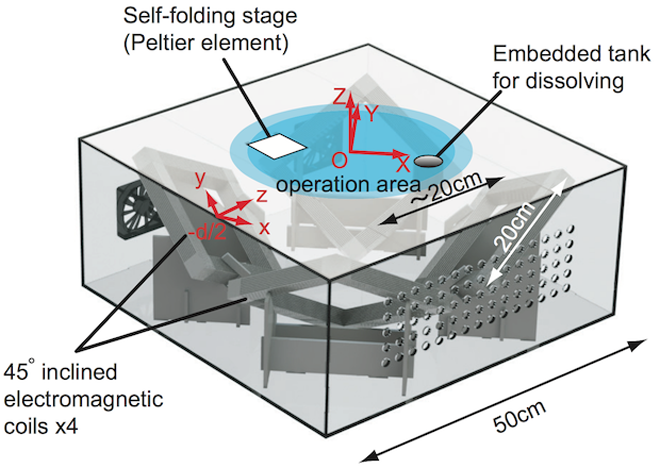 Besides walking and turning, the robot can climb, carry a heavy load relative to its own weight, push objects, dig, and swim, thanks to its boat-shaped body.

But most impressively, when it is made of polystyrene, the robot can slowly disintegrate when it immerses itself in a tank of acetone, , leaving behind only the magnet, effectively “deleting” itself. It’s a particularly beneficial attribute with many medical applications; these robots could someday be an army of nanosurgeons that can go into a body and repair it, then “delete” themselves, explains lead researcher Shuhei Miyashita:

Nobody wants to swallow a battery and a motor. [So] we are trying to make the materials intelligent or autonomous. [With these robots] we complete the cycle from birth through life, activity and the end of life. The circle is closed.

While this robot looks deceptively simple, one has to look at the remarkable developments in modern origami to see where this invention might go. Take today’s developments in what is called “origami mathematics,” “computational origami,” and the modern innovations pioneered by origami grandmaster Akira Yoshizawa, or the incredible, hyper-realistic natural origami forms created by physicist Robert Lang, and one can begin to imagine the levels of complexity to which these self-folding, animated origami robots might evolve someday. 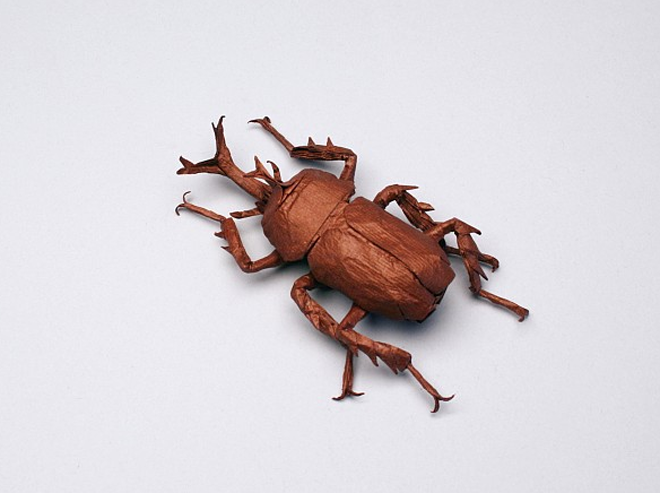 Allomyrina dichotoma, folded from one piece of paper, by Robert Lang.

Of course, there are still bumps in the road, most notably how to reduce or eliminate electronic parts, especially if the robots will be used within human bodies. In this case, actuation and control would be another challenge, in addition to carefully selecting materials that would be safe and task-appropriate. The researchers are aiming to integrate “self-folding sensors” into the robot next, to give it more autonomy. So while we won’t know what the future iteration of this ingenious little robot will look like, this is nevertheless a simple but impressive concept, combining traditional knowledge with cutting edge ideas. Read more of the study here.

SHARE THIS STORY
RELATED STORIES
Devs and Ops: Can This Marriage Be Saved? Engineering Leaders: Switch to Wartime Management Now Fear and Layoffs: How to Cope with Tech’s Uncertain Times Tackling 3 Misconceptions to Mitigate Employee Burnout Artemis Mission, Telescopes Present Data Challenges for NASA
SHARE THIS STORY
RELATED STORIES
'Coders' Author Clive Thompson on How Programming Is Changing How Security Champions Can Change Your Culture What Is a Sociotechnical Knowledge Map and Why You Should Care Kathleen Booth, Creator of the First Assembly Language Building an Internal Developer Platform Isn't Just about Tools
THE NEW STACK UPDATE A newsletter digest of the week’s most important stories & analyses.
The New stack does not sell your information or share it with unaffiliated third parties. By continuing, you agree to our Terms of Use and Privacy Policy.