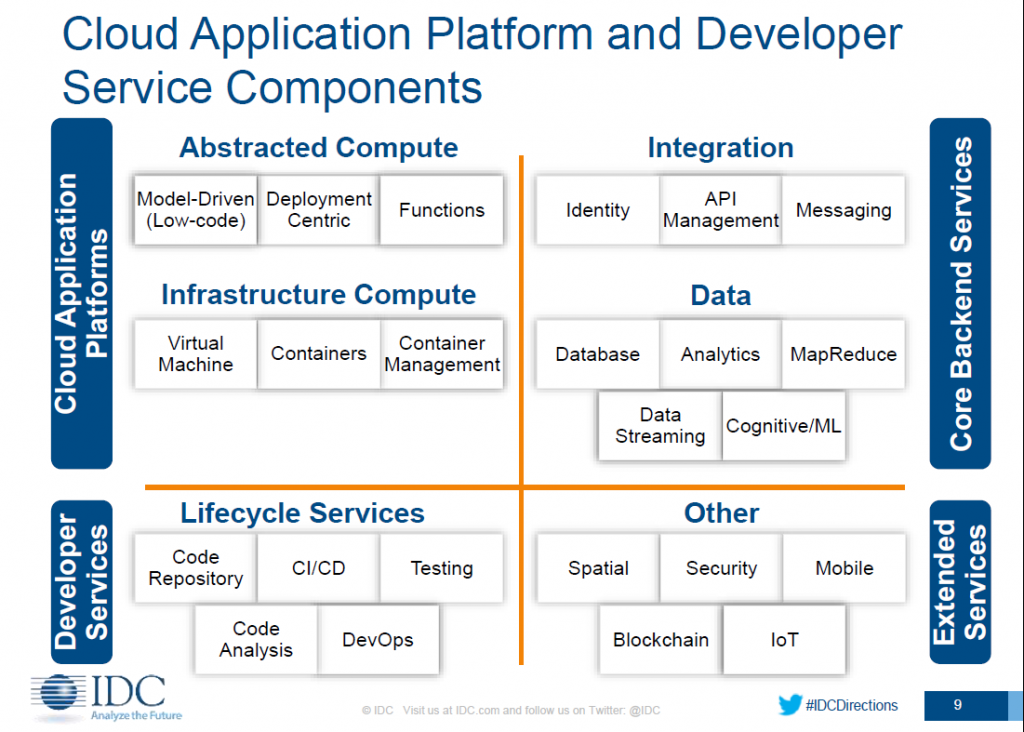 PaaS, CaaS, container management, cloud platform, what do you call that technology you’re using? In this episode of The New Stack Analysts podcast, Larry Carvalho, research manager and lead analyst for Platform as a Service at IDC, explains why the term PaaS is actually passè.

Instead of talking about platforms as a service, Larry uses the term “cloud application platform.” This cloud platform provides compute abilities, developer services, as well as back-end services. At its core, it has to provide a compute engine that traditionally was provided as a VM, but compute is increasingly done with containers and even as functions. In other words, no matter how an application is packaged, it can still be run on top of a platform.

The common theme with all cloud platforms is that users are looking for automation. Larry described three types of platforms:

When we talked about containers as a service (CaaS) with Chip Childers, he distinguished CaaS from PaaS by saying that CaaS tended to be unstructured, and mostly just provide the infrastructure needed to run containers. Childers believes that PaaS actually help with the building and deploying of containers. While this distinction is valuable, Larry provided a much simpler explanation by saying, “CaaS is just another way to package your apps, that is faster.”

The second half of the conversation (link to 26:00 minute mark) covered the perspective that CIOs have regarding lift-shift, cloud migration and the process of reviewing application portfolios. Larry says there are two types of CIOs: 1) those that depend on consultants and 2) those that are bringing the consulting approach in-house. That second type of CIO is becoming more prevalent. Sometimes they will rely on in-house innovation labs to develop a broad range of skills.

Abstraction of the infrastructure is driving the need for full-stack knowledge. CIOs are looking for people with knowledge of many different technologies to evaluate technology decisions and help bring in new platform capabilities. When evaluating platforms, they are looking to absorb developer services like CI/CD and testing, as well as the ability to bring in new capabilities such as machine learning and IoT-related services. In order to help CIOs, vendors are increasingly bringing in a solution architect during the pre-sales process. These vendor-side engineers work with an enterprise to address issues surrounding strategy, governance and architecture.

Alex ended the show saying PaaS used to be just a dream but is now having a second chance with containers.