Send in the Bots: How Drones and Robots Help Fight COVID-19

With the global pandemic upon us, techies are finding ways for both drones and robots to help slow the spread of COVID-19 infections.
Apr 5th, 2020 6:00am by David Cassel 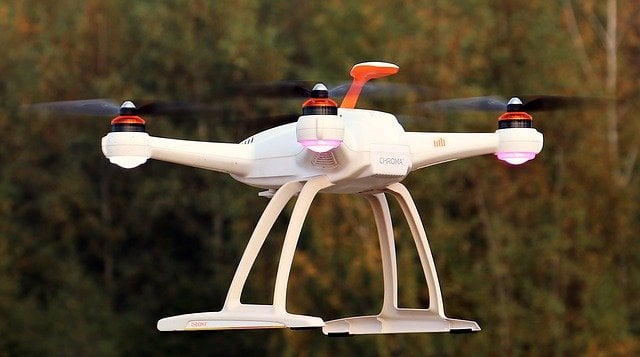 As we face down new challenges, we’ve always enjoyed a burst of new technologies, often surprising ones, to help make things better. Now, with the global pandemic upon us, techies are finding ways for both drones and robots to help slow the spread of COVID-19 infections. As everyone looks for ways to do what they can to help, here are some examples of how drones and robots have come into play.

A man in Cyprus used a drone to walk his dog. (Although “many Twitter users said it looked like the dog was actually walking the drone,” noted one local news site.) And USA Today told the charming story of a Brooklyn woman who texted a suitor after he delivered his phone number to her rooftop with a drone. This led to a date via Facetime —  where he looked down to her rooftop from his balcony overhead.

And there’s been other stories of individuals using drones to help out their neighbors.

News teams have been using drones to safely record those deserted streets that show we’re doing our part by sheltering at home. Drones were used to film the empty streets in Milan [NBC News] and Florence [AFP News] to Chicago [ABC News], Baltimore [WMAR 2], and Los Angeles [the Washington Post]. The Charlotte Observer reports that amateurs are also sharing their own eerie footage on YouTube including Boston, Denver, Houston and Chicago. The editor of the DroneLife site — was has been sharing the videos — explains to them the message the technology may be sending. “During this time which is so strange for all of us, drone flyers sharing pictures of empty cities are showing us that we’re all in this together, that an entire city is doing what they have to.”

And the Observer’s reporter found others who shared the same optimistic viewpoint. “Some commenters say they see the empty cities as a sign of hope: Americans are taking stay-at-home orders seriously and refusing to leave for anything but essential business.”

We sent drones out in New York, Los Angeles, San Francisco and Seattle
to see how the cities have changed since the COVID-19 lockdown. pic.twitter.com/PFJhLXZaA3

But drones aren’t just being used for checking in on empty cities. A town in Wales used drones to announce reminders about social distancing, according to a video from Bloomberg, and Sky News found the same thing happening in Western Australia. In fact, the government-owned TV station France 24 reported drones are becoming a “key tool” in the fight against the coronavirus, with police departments around the world using loudspeaker-equipped drones to warn people off the streets. They showed footage of the new approach from China, Spain, Malaysia, the United Arab Emirates, Italy, and the U.K. — and it’s also being tested now in Paris. “A drone is not going to replace a police officer,” one Paris police prefect tells them. “That goes without saying, but it’s part of the information gathering.”

“Sometimes they are attacked by birds, which mistake them for rivals — but rarely by people walking around.”

France 24 also found another interesting use for the technology. In Chennai, India, and Surabaya, Indonesia, drones are being used to spray disinfectant in crowded cities.

#Drones can be a game-changer in fighting #coronavirus & facilitate spraying disinfectants in hospitals and public places like railway stations & bus stands where involvement of people increases the risks of getting infected from #COVID19.https://t.co/5PKIuEMAj5

“Medical delivery drones” were also used in China to fly quarantine supplies and medical samples, according to an article in GPS World magazine. They note that this so-called urban-air transportation channel — licensed in October and launched in February — “significantly reduces contact between samples and personnel, as well as improves delivery speed” — more than 50% faster than ground delivery.

And there are other companies hoping to expand the use of medical delivery drones. A company named Zipline had already been delivering masks and gloves via drone in both Ghana and Rwanda since 2019, and it’s now seeking FDA approval to speed up its launch in the U.S., according to Fast Company.

Bots for the Dirty Work

Drones aren’t the only modern technology that’s being used to keep humans safe while fighting the spread of the new coronavirus. Back in January, America’s first known case of COVID-19 was “treated largely by a robot,” CNN reported. The stethoscope-equipped robot helped take the vital signs of a man in his 30s, according to their report — although there were also nurses in the room to “move the robot around.”

And at Circolo Hospital in Varese, a hard-hit city in northern Italy, they’re using six “robots nurses,” according to a recent article in U.S. News & World Report. “It’s like having another nurse without problems related to infection,” explained the hospital’s director of intensive care, an advantage which helps them conserve face masks. The robots provide remote communication for patients and doctors, and can also monitor equipment in the room — without ever needing to sleep.

But one medical device site reported several other ways robots are aiding in the fight. For example, one hotel in China has been converted into a sick ward for quarantined patients where, on all 16 floors, food is being delivered by robots. In another Chinese hospital, medicine is couriered around by autonomous delivery robots. Each speedy robot is said to do the work of three people. Meanwhile, a Los Angeles-based company has sold its “GermFalcon” robot to at least three major airports to shine it virus-killing UVC lights onto the seats in airplanes. And a San Antonio company makes a robot that can disinfect a hospital room using pulses of xenon ultraviolet-C light.

The New York Post also reported on a robot in China that not only delivers meals, but also takes patients’ temperatures, gathers bedsheets, and even disinfects the facility. And back in February Forbes was also reporting that Aethon, a Pittsburgh-based company, has deployed its supply-delivering robot at more than 140 sites. The Washington Post notes that the subways in Hong Kong are even being disinfected by a fleet of miniature robots.

As healthcare workers are facing pressing challenges from #COVID19, #robots can play a major role to carry out various tasks like sanitising hospitals, delivering foods & medicines and administering treatment to patients while curbing human infection.https://t.co/ST3u7zmm10

But looking down the road, there could be even more applications. “Robots have the potential to be deployed for disinfection, delivering medications and food, measuring vital signs, and assisting border controls,” wrote an international group of robotic experts in an editorial in the journal Science Robotics, which advocated for “a fusion of engineering and infectious disease professionals with dedicated funding.” The piece suggests one possibility could combine thermal sensors with automated cameras and vision algorithms networked with security systems using facial-recognition capabilities “to retrace contacts of infected individuals” in order to alert them of possible infections, adding that “It is important, however, to introduce appropriate rules to respect privacy.”

They see the possibility that this pandemic may increase interest in the use of robots to battle infectious disease — noting that that’s ultimately a very typical human response.

“Historically, robots have been developed to take on dull, dirty, and dangerous jobs.”