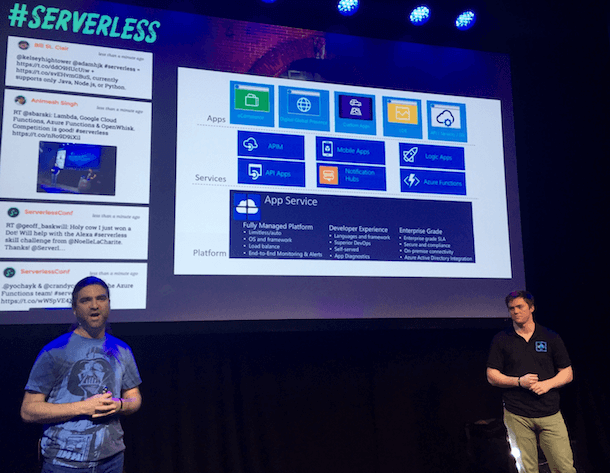 When it comes to the emerging technology of serverless computing, image processing is rapidly becoming a killer app, at least for demonstration purposes anyway, to judge by the presentations at last week’s ServerlessConf in New York.

From the show, it appears as if the bulk of early adopters of serverless are currently startups, which are already building full value chain applications using this emerging application development paradigm. Meanwhile, the enterprise seems to be showing early interest in adopting to serverless for specific workflow processes and to trigger and manage automated actions.

Amongst both startups and enterprises, image processing has emerged as an early frontrunner in the serverless use cases, particularly when coupled with some form of cognitive analysis such as object or facial recognition. Serverless applications being built also tend to have some form of social networking component.

To kick off the conference, Tim Wagner, general manager of AWS Serverless Compute, had highlighted image processing as one of his most interesting use case areas for serverless.

#serverless is the drive-thru model: "You pay for the hamburger not the cow"- #AWS @timallenwagner #serverlessconf pic.twitter.com/Ba39Yg0Lg0

The rest of that day offered some further examples: IBM’s serverless tool OpenWhisk, that runs on Bluemix, demonstrated a use case with a drone taking aerial photographs and then using cognitive APIs to analyze data in those photos. Andrew Trice, developer advocate at IBM Cloud, says that this is one of the use cases that IBM’s Global Business Services has an immediate need to share with their clients.

Trice says that drones taking images and immediately processing them applies to the enterprise today in infrastructure inspections, documenting flood and fire risks by insurance companies, search and rescue activities, and is being used in precision agriculture to map and survey fields efficiently.

To date, Trice does not see a full serverless business solution emerge from that use case. Enterprise is interested in one or two steps of the full process: using drones, taking images, and storing those images in cloud storage, for example.

The full business solution hasn’t yet made it to enterprise, though: “Basically, any time you write data to Cloudant, we can invoke actions that automatically trigger an image replication process, syncs that to the cloud, launches IoT sensor readings, invokes OpenWhisk and then the Watson functions. But this is so new; no one is asking for this so far,” Trice said. “What becomes so interesting is that as soon as I showed it to GBS, they said we have customers asking for this right now.”

Also at the conference, The New Stack contributor and serial entrepreneur Joe Emison shared two startups he has created that leverage serverless environments. One of those, CommercialSearch, is a commercial real estate listing site that at its core is a combination of image processing and social functions that enable users to upload or review property listings, make comments or save their searches. Both that application and a second startup that takes property listings and creates look books (more image processing tasks) are built using a range of third-party APIs and serverless infrastructure including Algolia, Netlify and Google Firebase.

This was followed by a presentation by Google’s Firebase advocates Mike MacDonald and Frank van Puffelen — straight off the back of a launch at I/O last week where Firebase has become “a suite of 14 or 15 Firebase products: storage, app invites, crash reporting, testlab and others that help you build your user base and help you make money,” said van Puffelen. They demonstrated building a serverless app that uploads video to cloud storage, creates stills from each frame, stores those in the same cloud storage, and applies cognitive machine learning for object and facial recognition.

The original secret sauce of @Firebase: you don't query the database, you listen for changes in the tree #serverless pic.twitter.com/Dp7BgdciWO

Similarly, Yochay Kiriaty, principal program manager at Microsoft Azure, says that even though its serverless offering Azure Functions is still in preview mode (having just been launched in April this year), “there are a lot of scenarios we are seeing where customers are using serverless with image processing, and any actions that involving reacting to events, such as changes to items in storage, or in databases.”

Kiriaty describes: “Azure Functions can trigger actions out of a stream of data, run cognitive services and image analysis, and use custom business logic and trigger further actions. The output of all that can be put in Azure Storage could kick off another function which figures out what is the next step to take. And you can tie all of that together using Azure Logic Apps to orchestrate all of that and maintain statefulness of the workflow.”

But like Trice, Kiriaty says that there are few enterprise use cases to date that are building that kind of full business solution in a serverless environment. Instead, enterprise is interested in leveraging serverless to carry out specific tasks: “Image processing and content processing and doing any content manipulation in the background is very common. Storing an image and then resizing it, putting it back into storage is a good example,” Kiriaty said.

So what is emerging here today is two streams of uptake for serverless: startups are gaining a business advantage by building fully functioning apps that daisy chain APIs together to create an application, like SparqTV and CommercialSearch. Amongst enterprise, the focus to date is more on specific tasks, much like the way Iron.io is seeing traction amongst business customers for batch processing and task management in a serverless environment.

Tech analyst James Governor from RedMonk says that what this is all demonstrating is the move to a permission-less industry landscape. Staff within an enterprise are encouraged to sidestep asking for IT permission to build new workflow tasks and are leveraging serverless to create innovation and efficiency opportunities. Startups are leveraging serverless to gain permission for their business models that doesn’t require venture investment for them to build a viable business. A Cloud Guru demonstrated this in its presentation: offering video training on a learning management platform (again, image processing and social network functionalities), completely in a serverless environment, has grown into a viable business where business costs are only incurred when customers buy a training course.

Serverless is reducing application complexity and lowering the barrier to entry, and accelerating development by startups and business units outside of IT departments. In Governor’s mind, this new application development paradigm is demonstrating the power of innovation: serverless becomes permissionless.

Mark Boyd is a freelance writer for The New Stack and ProgrammableWeb. He's into: API economy, open data, smart cities and tech that helps us interact and connect.
Read more from Mark Boyd
SHARE THIS STORY
RELATED STORIES
Serverless Usage Not Popular in Workplaces, Survey Reports Aleph.im Is Like a Decentralized AWS Lambda for Web3 DApps AWS Offers a TypeScript Interface for Lambda Observability The Latest Milestones on WebAssembly's Road to Maturity Hazelcast Aims to Democratize Real-Time Data with Serverless
IBM and Iron.io are sponsors of The New Stack.
SHARE THIS STORY
RELATED STORIES
KServe: A Robust and Extensible Cloud Native Model Server Survey Finds Majority of Jamstack Community Testing Edge Kelsey Hightower on Software Minimalism and JS Frameworks Is Kubernetes Adoption Slowing? Is Serverless Just a Stopover for Event-Driven Architecture?
THE NEW STACK UPDATE A newsletter digest of the week’s most important stories & analyses.
The New stack does not sell your information or share it with unaffiliated third parties. By continuing, you agree to our Terms of Use and Privacy Policy.