The platforms that run serverless workloads are just one aspect of a larger ecosystem of tools to manage and monitor applications throughout the software development lifecycle. Although many solutions are open source, there is a strong influx of companies hoping to profit as enterprises move serverless application into production environments. This article uses survey data to show which tools are seeing adoption by those using serverless architectures.
Nov 8th, 2018 6:00am by Lawrence E Hecht 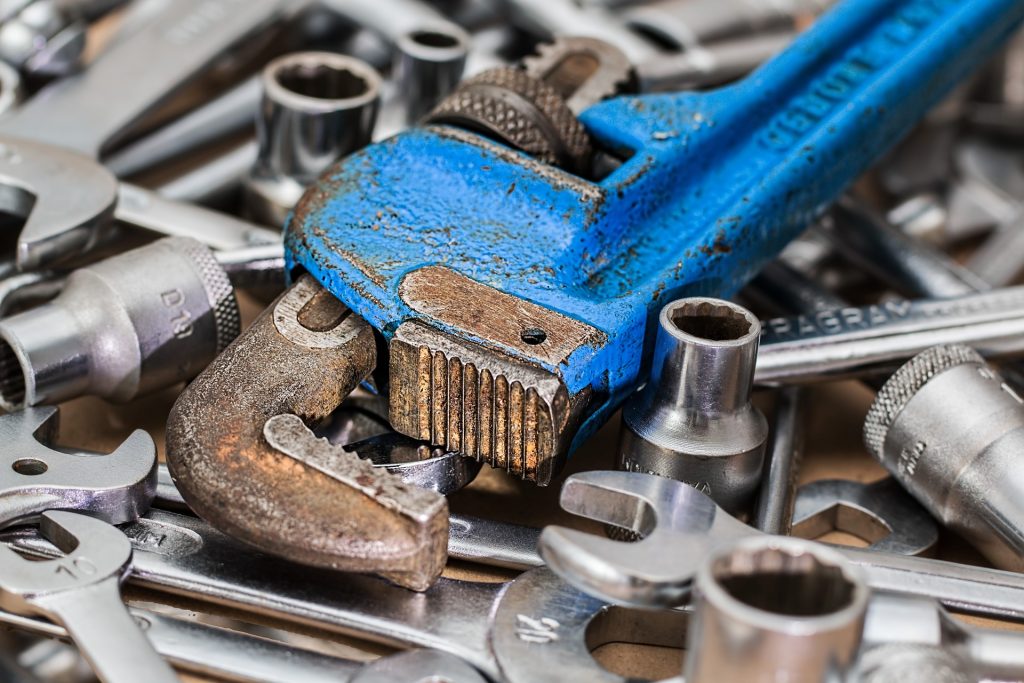 The platforms that run serverless workloads are just one aspect of a larger ecosystem of tools to manage and monitor applications throughout the software development lifecycle. Although many solutions are open source, there is a strong influx of companies hoping to profit as enterprises move serverless application into production environments. This article uses survey data to show which tools are seeing adoption by those using serverless architectures.

Frameworks make it easier to develop and deploy applications. The most popular framework in our survey was Serverless Framework by Serverless, Inc., which can be used on many different cloud platforms. Serverless, Inc. has found some success translating its early lead into adoption of another oft is offerings, Event Gateway, which routes events and assists with API development. We found that seven percent of current Serverless Framework users already deploy Event Gateway, with another 20 percent planning to do so in the next 18 months. The second most commonly mentioned framework only helps with AWS-centric development, the Server Application Model, from Amazon Web Services.

As we previously reported, 62 percent of everyone with expecting to use a serverless architecture say they will be writing functions using Python. Thus, it is not surprising that Python-specific tools like Python Lambda and AWS Chalice made significant showings on serverless roadmaps. 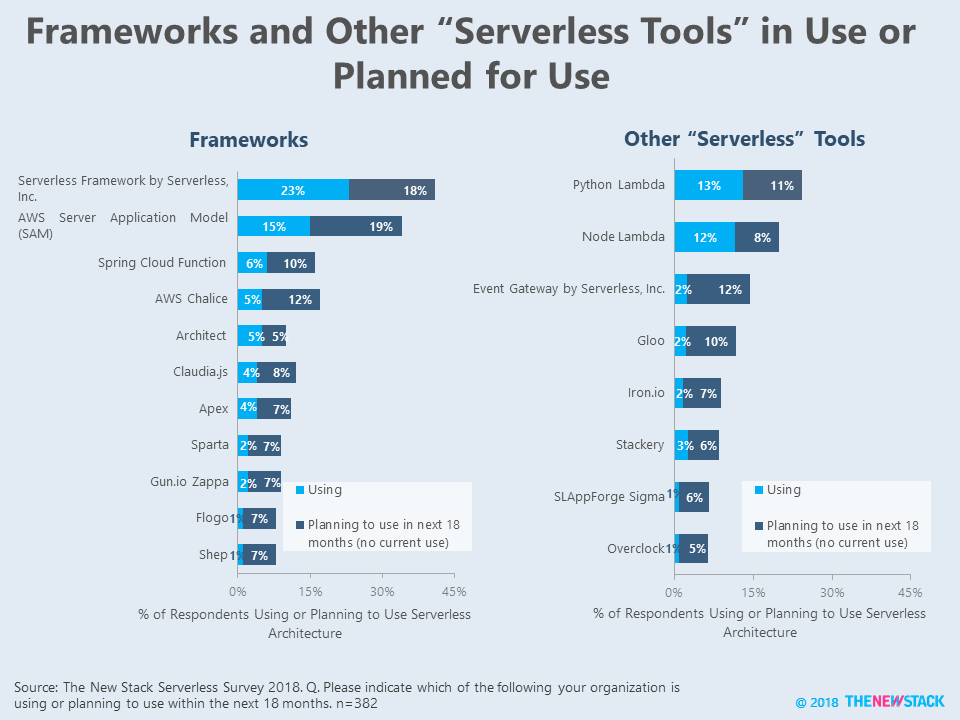 This data comes from a survey on in our “Guide to Serverless Technologies” eBook, which describes some of the challenges faced in monitoring serverless applications as well as their impact on enterprises’ security posture.

For monitoring, we found that cloud provider’s own tools were commonly used to monitor applications, with Amazon CloudWatch used by 88 percent of respondents with live AWS Lambda. implementations. Although Microsoft’s Azure Application Insights and Google’s Stackdriver were not offered as answers in the survey, many respondents made the effort to mention these tools in an”Other” box.

Other write-ins, like New Relic and Prometheus, fall into the category of more general monitoring tools that are starting to look at serverless applications. The survey itself asked about tools purpose-built for serverless use cases, such as Epsagon, Thundra and CloudZero, but there does not appear to be a clear-cut favorite among this group. The same thing can be said about the security solutions — Snyk and Twistlock are the leading tools being used, but overall adoption rates are low enough that competitors have a chance to catch up. 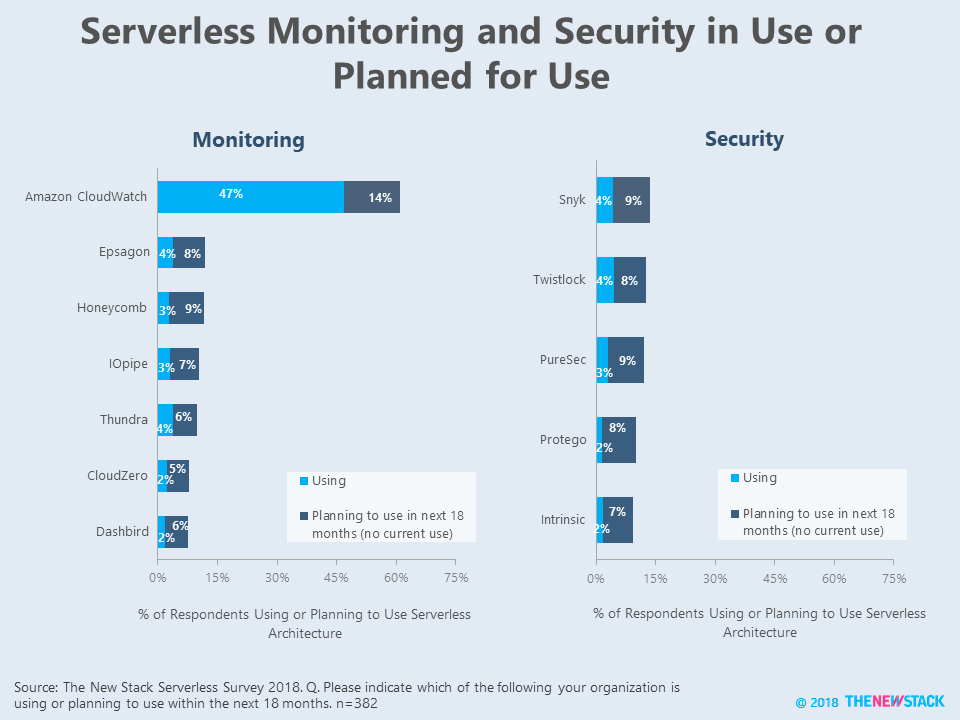 In-depth coverage on some of the technologies mentioned in this article can be found in these articles:

Stackery, Twistlock and New Relic are sponsors of The New Stack

Lawrence has generated actionable insights and reports about enterprise IT B2B markets and technology policy issues for almost 25 years. He regularly works with clients to develop and analyze studies about open source ecosystems. In addition to his consulting work,...
Read more from Lawrence E Hecht
SHARE THIS STORY
RELATED STORIES
Security Teams Need a Higher Appetite for Risk Why Cloud Native Systems Demand a Zero Trust Approach Why the Castle and Moat Approach to Security Is Obsolete Why Developers Should Learn Kubernetes LogDNA: Observability Enables DevOps
TNS owner Insight Partners is an investor in: The New Stack.
SHARE THIS STORY
RELATED STORIES
How to Fight Kubernetes Complexity Fatigue The Cultural Changes Zero Trust Security Demands Why Cloud Native Systems Demand a Zero Trust Approach How Do Authentication and Authorization Differ? Cloud Native Observability for DevOps Teams: an Introduction
THE NEW STACK UPDATE A newsletter digest of the week’s most important stories & analyses.
The New stack does not sell your information or share it with unaffiliated third parties. By continuing, you agree to our Terms of Use and Privacy Policy.