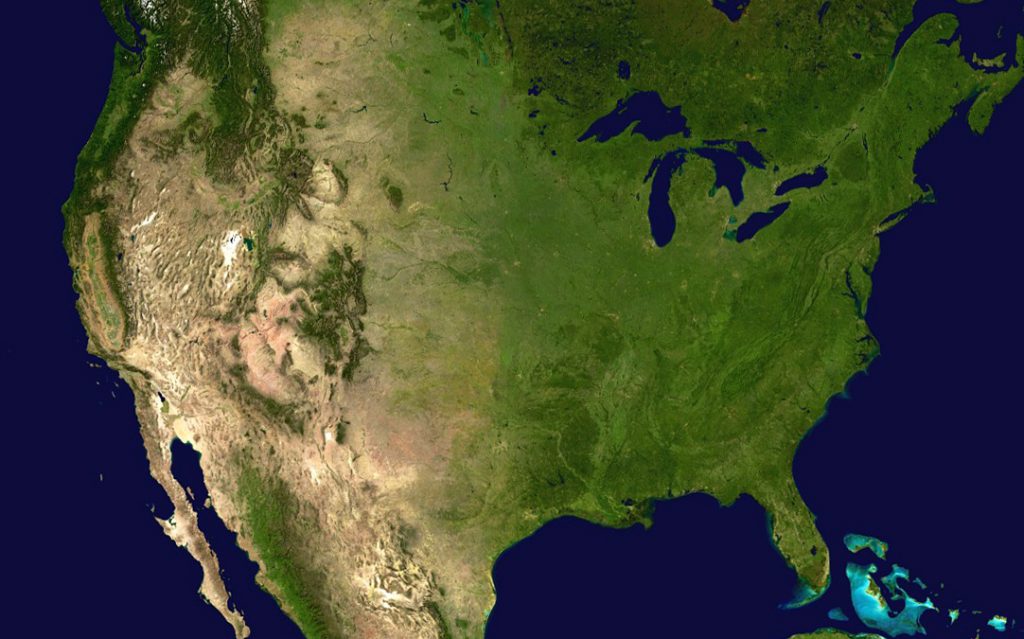 Earlier this month, one of the world’s biggest real estate firms trumpeted some surprising news about America’s best alternative tech locations to Silicon Valley. The top location outside of Silicon Valley? Washington D.C.

It’s the firm’s first edition of a new report, “Tech Cities 1.0,” which aims to identify America’s top 25 promising tech centers, and lauds the Washington D.C. area as “a significant outpost for tech companies seeking proximity to policymakers as well as for burgeoning cybersecurity investment.” (Although not actually built atop a swamp, the Washington D.C. does have quite swampy weather in the summer, something those migrating from the milder San Francisco climes might want to bear in mind).

So what makes someplace a top tech city? Real estate is quickly becoming a primary factor, according to this real estate company. But how deep the bench of tech talent is also making a big difference.

Cushman & Wakefield analyzed what it considered the best metrics — “the key ingredients that comprise a tech stew” — including the availability of tech talent and capital. Other factors included the percentage of workers with at least a bachelor’s degree — and the percentage of millennials in their population.

Interestingly, Seattle only comes in it at sixth — behind Boston/Cambridge Massachusetts and Raleigh/Durham/Chapel Hill (at fourth and fifth respectively).

“Seattle has played catch up over the past few years,” said Robert Sammons, and one of the report’s co-authors. “But with housing creation now outpacing that of the Bay Area and with a huge $54 billion transportation initiative that recently passed at the ballot box, it will likely allow it to compete much more aggressively with those markets at the very top of the list.”

Sammons argued that the Bay Area’s notoriously high housing costs — along with mass-transit issues — are also helping other cities attract a share of the technology industry, including Austin, Denver, and San Diego (which its report names as America’s seventh, eighth, and ninth top tech cities respectively), and even Salt Lake City at 24th.

“As coastal cities, including San Francisco, New York [15th] and Boston [fourth], become increasingly expensive and difficult to scale affordably, technology companies are relying more on smaller, middle-tier markets like Denver to grow their workforce, recruit and retain educated talent and decrease overhead costs,” one of the company’s executive managing directors explained to a Denver business journal. Though a tech company’s corporate headquarters may be somewhere else, “we’ve continued to see larger, more established firms opening offices in Denver, including Google, Apple and Amazon.” 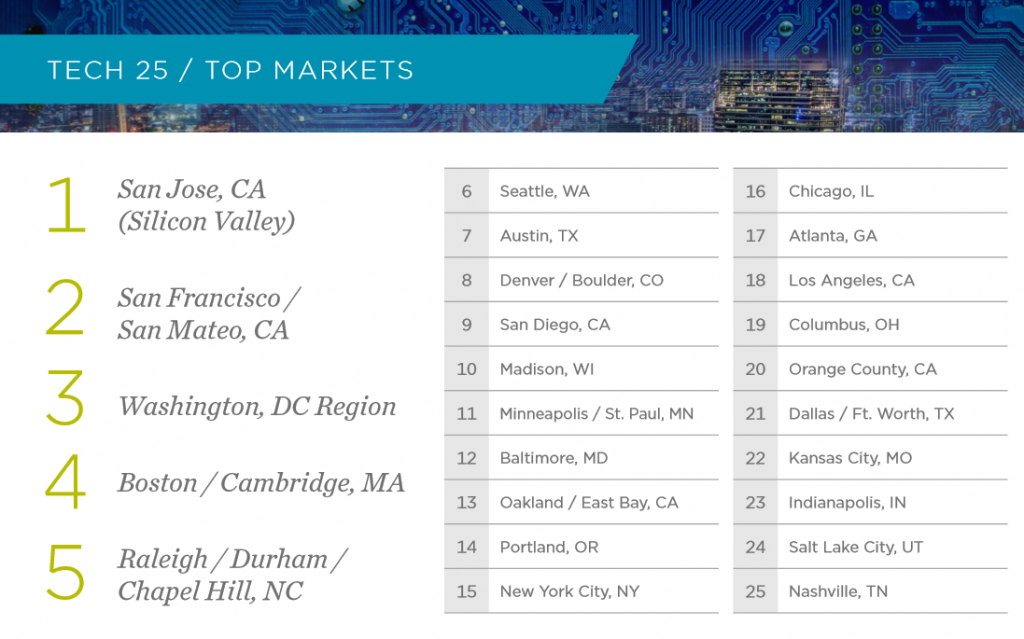 Cushman & Wakefield is not the only real estate firm releasing a list. Last summer CBRE Group — the world’s largest real estate investment manager, with revenues of $11 billion — calculated its own list of the best markets for tech talent — defined as “their ability to attract, grow and retain tech talent pools” — over both the U.S. and Canada. This analysis used 13 metrics, including housing costs and wages. It’s interesting to see where the results differed — and where they didn’t.

CBRE Group still chose the same two cities for the top of its list — though lumping San Francisco and San Jose together as “Bay Area,” which gave the metropolitan area a score of 84.62 — far above Washington D.C., which carried a score of 67.24. But CBRE believed the next-best markets for tech talent were Seattle, New York City, and Austin, Texas, followed by the Dallas/Fort Worth area.

On this list, the Raleigh-Durham area in North Carolina ranks seventh, while Boston is eighth. It’s followed by Atlanta, Baltimore, and surprisingly, Phoenix, Arizona — a city which didn’t even appear on last week’s top-25 list from Cushman & Wakefield.

The two lists aren’t necessarily measuring the same thing — and they’re also calculating rankings with different sets of metrics. But the fun of a list like this is the way it suggests hidden trends — and the effects they’re having on surrounding areas.

An article in the Kansas City Business Journal noted that in San Jose, knowledge workers account for 27.4 percent of the workforce, while the national average is just 4.81 percent. Cushman & Wakefield’s report acknowledges that the big issues tech companies face when coming to New York is “a lack of the skilled labor force they needed, particularly engineer,” as well as recent investments in tech education at New York universities which should pay off down the road.

But six of the lists top 25 tech cities on Cushman & Wakefield’s list actually came in below the average for knowledge workers — Indianapolis, Chicago, New York, Columbus, Los Angeles and Nashville. At least some of this seems based on the fact that this report used the percentage of workers rather than the number of workers — which explains why major cities like Portland, New York City, Chicago, Atlanta, and Los Angeles ended up in the list’s #14 through #18 spots, respectively.

“Really, the key reason why L.A. ranked where it did is the sheer size of the market,” Sammons explained to the Los Angeles Times. “L.A. is sprawling with different sectors across L.A. County and there is more of a focus on media and entertainment, so tech sometimes gets caught in the mix.”

Or, as the report puts it, “Los Angeles is a market that’s just enormous, it’s sprawling….”

What’s the real significance of these lists? There are two ways to look at it. A senior director at Cushman & Wakefield’s Kansas City office told a local business journal that good tech opportunities are “positive for building owners, brokers, restaurants and the city as a whole.”

But the number of business journals reporting on the list is perhaps the other reason it exists. I recently read the biography of Barbara Corcoran, one of the investors on the TV show Shark Tank, who recalls launching the Corcoran Report real estate trends in New York City — which was an easy way to drum up free publicity for real estate firms.