If it wasn’t for the incessant technical curiosity of John Draper, the now 74-year-old former phone hacker known as “Captain Crunch,” Apple Inc. may not exist today.

And now, the Captain has just raised $26,000 on Kickstarter to publish his biography. It promises to tell a wild tale of “an eccentric genius who went from being a penniless hacker to a millionaire and back again.” Draper was a hacker “so consumed by his vision that the real world around him has always played second fiddle.” The book’s foreword has already been written by his long-time friend, Apple co-founder Steve Wozniak, and the campaign’s page promises a “Kerouacian journey” that “gives us an inside look at the birth of modern computing through the eyes of one of its most influential pioneers.” The book is due next March.

Beyond The Little Blue Box. I heartily endorse this book…I love stories of interesting people…Woz https://t.co/fD0x254m2d

Draper’s life has long been known to be one of the most colorful stories from the early history of Silicon Valley. He gained notoriety by hacking the phone company in a time when few even thought about the possibility of doing such a thing.

“I was an outlaw,” Draper stated on his Kickstarter page. “In the early ’70s, I found various ways to hack the phone company and get free calls.” He describes them — with a smile — as “heinous crimes.”

Born during World War II, Draper was the son of a U.S. Air Force engineer, according to a profile in the Wall Street Journal, and by 1964, at the age of 21, John had already enlisted in the Air Force himself, where — stationed in Alaska — he helped the other servicemen make free phone calls through a local switchboard.

But after his discharge, Draper soon gained lifelong notoriety for jerry-rigging an infamous “blue box” which could mimic the tones which controlled the entire U.S. phone system — effectively allowing him to place free calls to anywhere in the world.

In an excerpt from his upcoming book on the Daily Dot, Draper shares his memories of working on the device — while still living at home with his family. “I really needed to get out of my parents’ house. My mothers’ nagging was relentless, and my father just sat in the kitchen, smoking cigarette after cigarette,” he wrote. He’d placed his first stolen phone call to an operator in Chicago, and his biography finally captures all the details of that moment in history, when Draper first felt the giddiness of success.

“My dad told me to settle down, my mom was screaming at me to be quiet, and [my brother] Ron just stood there scratching his chin. I didn’t dare tell any of them what I was actually up to… I was so excited that I hardly slept at all, and when I did fall asleep I had this amazing dream that I was in control of all the phone companies in the world.”

Draper is offering replicas of his bluebox as a “premium” for people who pre-purchase his upcoming book.

Draper came to prominence for his engineering in 1971, when writer Ron Rosenbaum profiled the young hacker in Esquire, which touted the piece as “A story so incredible it may even make you feel sorry for the phone company.”

The article “Secrets of the Little Blue Box” sparked the imaginations of countless tinkerers worldwide, including Wozniak, who remembered, “I was intrigued about being a part of this little rebellious thing.” So Wozniak and his friend Steve Jobs sought to meet the famous phone phreaker, learned his secrets, and eventually began selling the phone-hacking hardware themselves.

Both Wozniak and Jobs agreed that without Draper, Apple Computers might never have happened. In a 1994 interview Jobs said the experience gave them two things. First, “the confidence that we could build something and make it work” — but secondly, and perhaps more importantly, “a sense of magic — that we could influence the world.”

Of course, there’s another more tangible reason why that first Apple computer wouldn’t have happened without Draper’s blue boxes. “The initial money Woz needed came from selling them,” Draper wrote on Reddit, “which went into laying out and producing the printed circuit for the Apple One.”

But while Jobs and Wozniak went on to become wildly successful with Apple, Draper ended up doing hard time for phone fraud.

After his release from prison, “I was one of the Apple computer pioneers,” Draper says in a video, “helping to launch the Apple II. he even developed an early version of a modem, a telephone interface board, which allowed for data transmission over telephone lines as we know it today.” But that board was never actually marketed because AT&T “were too freaked out,” according to a 2008 interview with Draper. 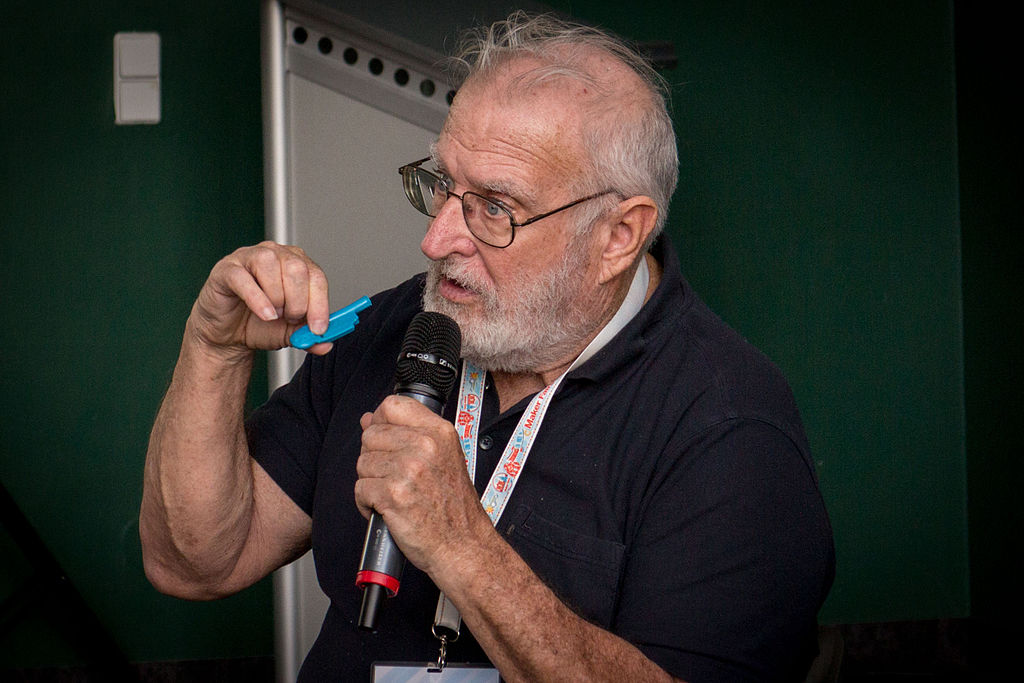 “Because everything was done in software, the board could have evil thoughts and you don’t wanna have a board with evil thoughts… There was software and with the right tone table, you could turn it into a blue box. AT&T did not want that.”

It would’ve offered 300-baud speeds — though the arrival of the 1200-baud DC Hayes modem soon would’ve rendered it obsolete anyway. But at least Draper ended up with a funny story about his early days at Apple: “Steve [Wozniak] modified the program, to call Steve Job’s home phone number over and over again and let it run all night.”

Many of Draper’s stories seem to follow the same pattern, of narrowly missing. “I also wrote the first-word processing program, EasyWriter, for the Apple II,” Draper said. He wrote the first designs in a jail cell — serving a second sentence for phone fraud. “We couldn’t copy the disks fast enough to keep up with the sales, and I was still in jail, at a Work Furlough program…” Draper remembered on Reddit.

“They would let me go to an office during the day under very close supervision, and before going back to jail I would print a fresh copy of the source code (in FORTH) and study and modify the code at night.”

Draper also claimed that he “beat Bill Gates to the punch” — specifically, beating young Bill Gates in a race to port EasyWriter to the IBM PC. Though in his Reddit appearance, Draper also asserted that later he lost out on the royalties from this work due to “shady dealings with my publisher.”

But Draper went on to become something of a legend. “For many tinkering young coders and internet activists, Draper is still considered a folk hero,” asserted a new profile in the DailyDot. “In the last decade, he has toured the world, telling his story, and speaking publicly about security flaws in telecommunications, online privacy, and encryption.”

By 2014 he’d experienced a series of health problems which included several surgeries for degenerative spine disease — one lasting over nine hours — and while under anesthesia he also suffered a cardiac arrest. This led to a one-month stay in the hospital and a lengthy rehabilitation program. “Insurance company covered most of the expense, but [I] learned a lot of items I need for recovery are not covered and are fairly expensive,” Draper posted on Reddit.

His fans were there for him though. “During DefCon this year, a large ‘get well’ card was written up and signed by the contestants of the Scavenger hunt and was presented to me in the hospital.”

But it didn’t end there, and an online campaign quickly raised $17,062. “Draper himself doesn’t even know who started the fundraiser,” reported Ars Technica, “but the money is intended to help with his medical bills.”

And of course, through the whole experience, he remained the same irrepressible hacker. While at the hospital, “They tied a snitch wire on me, so if I exit the wheelchair it goes off and the nurses come running,” John wrote at the time.

“I figured out how to disable it…” he added, “but I decided not to mess with it.”

SHARE THIS STORY
RELATED STORIES
Entrepreneurship for Engineers: Avoiding Feature Bloat Donald Knuth's 2022 'Christmas Tree' Lecture Is about Trees The Power and Ethical Dilemma of AI Image Generation Models Entrepreneurship for Engineers: Building for Customers’ Love Why 'Explainable AI' Can Benefit Business
SHARE THIS STORY
RELATED STORIES
2022 in Review: AI, IT Armies, and Poems about Food CES 2023: Robots, Astronauts, Schwarzenegger and Flying Cars How Jit Builds a Platform Engineering Mindset in the Cloud Java's James Gosling on Fame, Freedom, Failure Modes and Fun Entrepreneurship for Engineers: Building for Customers’ Love
THE NEW STACK UPDATE A newsletter digest of the week’s most important stories & analyses.
The New stack does not sell your information or share it with unaffiliated third parties. By continuing, you agree to our Terms of Use and Privacy Policy.