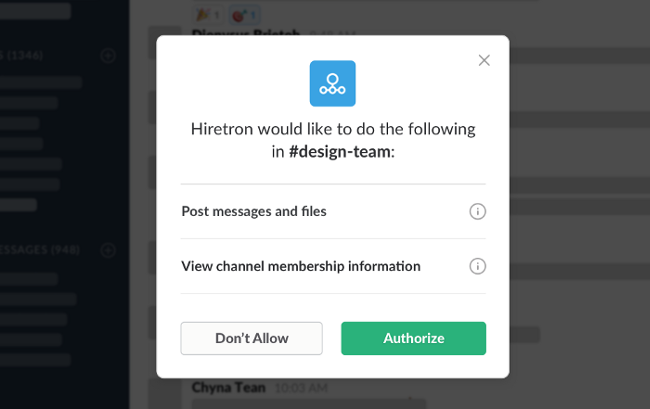 Slack is updating its API and core functionality to help developers distribute their Slack-based apps to more people, simplify development and maintenance, and extend the user experiences for these apps.

The broad strokes include a new Permissions API, team-based app tokens, and the promotion of apps to first-class citizens within the Slack interface. Combined, these updates bring apps to the forefront of both the user experience on the front-end and developer access to users and user data on the back-end.

For example, with the new Permissions API, developers will be able to request a bare minimum of access initially and then request more as user familiarity and trust increase with time, effectively lowering the barrier to entry. The goal here, as with app visibility within the Slack interface, is to increase the number of app installations and promote continued use.

Additionally, team-tokens will unbind apps from individual users and connect them instead to whole teams. Not only does this again allow developers to incrementally increase scope over time without the need for reinstallation, but it “will unblock access to customers who previously couldn’t use apps because of security or compliance restrictions.” Team-tokens also provide apps with access to channels and direct messages based on the team, rather than the permissions of individual users.

Finally, team-tokens further blur the distinction between bots and apps, combining functionality “meaning you won’t need to maintain a separate bot user to converse with your users.”

Ben Brown, founder and CEO of the Howdy Slack app provider and creator of Botkit, says that moving apps to the literal forefront remains the biggest part of this announcement.

“For app developers hoping to build a business on or involving Slack, the most exciting thing about these announcements is the improvement to application visibility inside the Slack client itself,” said Brown. “This will lead to higher retention and faster adoption as apps spread from channel to channel.”

While we noted back in 2015 that momentum was growing for the Slack developer ecosystem, a key part remains that hope to “build a business”, i.e. monetize. In the immortal words of the internet:

Eric Soelzer, a product manager with Howdy, says that these updates indicate a commitment on Slack’s end to filling in the blanks and making Slack apps a viable opportunity for developers.

“I think the most important part of the announcement wasn’t in the specifics of their announcement, but how these improvements (along with the workshop they threw yesterday) shows a real commitment to developers making bots on the Slack platform,” said Soelzer. “With much of the ecosystem still undefined, it’s important for developer success that the messaging platforms be receptive to feedback and adaptable when necessary. Slack is doing a great job of showing what it means to have a two-way relationship as a platform.”

Indeed, this appears to be the official line from Slack, as noted by Amir Shevat, head of developer relations.

“We’re doubling down on our growing developer ecosystem — we now have more than 155,000 active developers, with apps that are actively used on a weekly basis,” said Shevat. “Slack is always looking for new ways to provide more surface area for developers, richer ways to interact with users, and work towards expanding discovery and engagement of Slack bots and apps.”

For Tom Hadfield, CEO of bot syndication service Message.io, the move is one he hopes to see mirrored by other messaging platforms in the enterprise space. Hadfield notes that both team-tokens and progressive permissions will greatly improve trust for enterprise customers.

“Once again, Slack is leading the way with its recent developer-friendly API enhancements,” said Hadfield. “The bot developers we work with hope other enterprise messaging platforms like Microsoft, Cisco and Atlassian will follow suit!”

The API Preview Period is set to begin August 1st, during which time it will release new documentation and functionality as they become ready and allow developers to “play around with the features, create a team-token version of your existing app, or build something entirely new.”

Estimated general availability for the new API is currently “roughly” targeted for the first few months of 2018.

Mike is a freelance writer, editor, and all-around techie wordsmith. Mike has written for publications such as ReadWriteWeb, Venturebeat, and ProgrammableWeb. His first computer was a "portable" suitcase Compaq and he remembers 1200 baud quite clearly.
Read more from Mike Melanson
SHARE THIS STORY
RELATED STORIES
Platform Engineering in 2023: Dev First, Collaboration and APIs 5 Software Security Goals All CTOs Should Prioritize Pro Coders Key to Stopping Citizen Developer Security Breach Twitter Leak Shows How Important API Security Remains in 2023 Crossplane: A Package-Based Approach to Platform Building
SHARE THIS STORY
RELATED STORIES
Here’s How to Tame Your API Sprawl — and Why You Should What Is APIOps? (In Less than 500 Words) What TNS Readers Want in 2023: More DevOps, API Coverage 5 Ways to Improve Your Web Application and API Security Building Access Permissions into Your API
THE NEW STACK UPDATE A newsletter digest of the week’s most important stories & analyses.
The New stack does not sell your information or share it with unaffiliated third parties. By continuing, you agree to our Terms of Use and Privacy Policy.