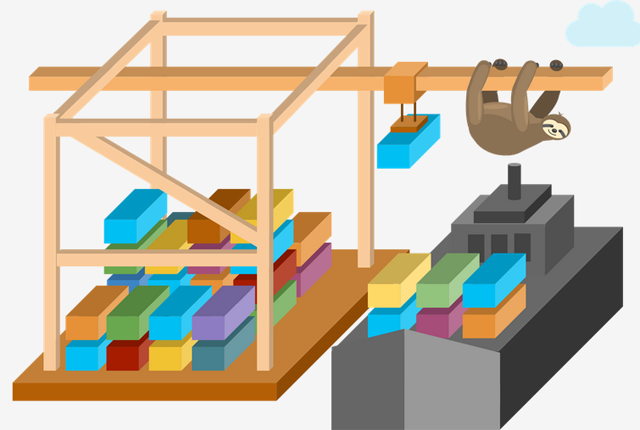 German privacy laws that require data to be kept within its borders has resulted in a potentially profitable business plan for sloppy.io, a new managed Docker hosting service for German businesses, and organizations elsewhere as well.

The Cologne-based company is focused on businesses that want to focus on code, not on managing servers. Its customers range from freelancers, startups such as hybrid integration platform elastic.io to enterprises like Deutsche Telekom.

With sloppy.io, users can focus on development; they don’t have to worry about storage, load balancing, updates and the rest.

“If your container is running on your notebook, you can host it on sloppy.io. Everything is just easy,” said Sloppy CTO and co-founder Mike Michel.

Explained Sloppy’s origins, Michel said when he and co-founder Marc Zimmermann had a side business to their regular jobs, providing DevOps tools and infrastructure to other businesses, they kept encountering the same problems: Delivering LAMP (Linux, Apache, MySQL, and PHP/Python/Perl) and MEAN (MongoDB, ExpressJS, AngularJS and Node.js) stacks over and over to customers with a lot of change requests regarding versions on software and servers.

“So we thought: Let’s build a self-provisioning platform. That was the end of 2014, and I just was introduced to Docker and immediately thought, ‘That will be a game-changer,’” Michel said.

They started building beta of sloppy.io in 2015 and had 1,000 users within two months, he said. It released version 1.0 earlier this year. The third co-founder, Horst Liebetrau, leads a team of 10 as CEO.

They started with Mesos/Marathon and say they still think it is the most stable platform for running containers at scale. On top of it, they developed an API server, web UI and CLI, and focused on simplicity. They just introduced “Clickstarters,” making it easy to get started in just a few clicks while deploying official Docker images:

It offers private repos through Docker Hub or Quay.io and an HTTP-based RESTful API that allows you to easily hook other web services. It supports CI/CD (continuous integration/continuous deployment) tools like Jenkins, CodeShip or Wercker.

In addition, the sloppy.io service offers:

“Another bonus is that we are a European company hosting in Europe [Germany]. A lot of our customers are not allowed or just don’t want to host at AWS, Google, etc.,” Michel said.

An increasing number of companies offer Docker hosting, including Docker itself, StackDock, Apcera as well as the likes of Hyper, Jelastic and Arukas. And last week Germany-based SUSE Linux announced it plans to release a container-as-a-service platform as a public beta in April next year.

In an interesting side note, San Francisco-based Gravitational is pitching its TeleKube managed Kubernetes service as a way for software vendors hampered in selling to customers in Europe and elsewhere because of local data-privacy laws to do so by teaming up with a hosting provider there or in private environments. Using ssh tunneling, Telekube could manage continuous deployments of Kubernetes remotely, its founders say.

Apcera, Docker, Mesosphere and Wercker are sponsors of The New Stack.

Susan Hall is the Sponsor Editor for The New Stack. Her job is to help sponsors attain the widest readership possible for their contributed content. She has written for The New Stack since its early days, as well as sites...
Read more from Susan Hall
SHARE THIS STORY
RELATED STORIES
4 Tips to Avoid Downtime Risks and Start the New Year Strong Top 5 Considerations for Better Security in Your CI/CD Pipeline Building a To-Do App using GitHub Actions, Playwright, Next.js How Yarn Workspaces Accelerated LinkedIn Code Delivery Interest Growing in Dart and Flutter for Mobile
TNS owner Insight Partners is an investor in: The New Stack, Docker, Real.
SHARE THIS STORY
RELATED STORIES
A Look at Kubernetes Deployment The Main Goal: Secure the Application Workload CircleCI to Customers: Change All Secrets and API Tokens NOW! GitHub Actions Were Vulnerable to Rust Artifact Poisoning Using DORA Metrics to Optimize CI Pipelines
THE NEW STACK UPDATE A newsletter digest of the week’s most important stories & analyses.
The New stack does not sell your information or share it with unaffiliated third parties. By continuing, you agree to our Terms of Use and Privacy Policy.