Getting into small-scale fab and manufacturing comes down to nurturing a strong willingness to learn, try new things and apply yourself. The actual monetary cost isn't too bad either.
May 7th, 2022 7:00am by drtorq 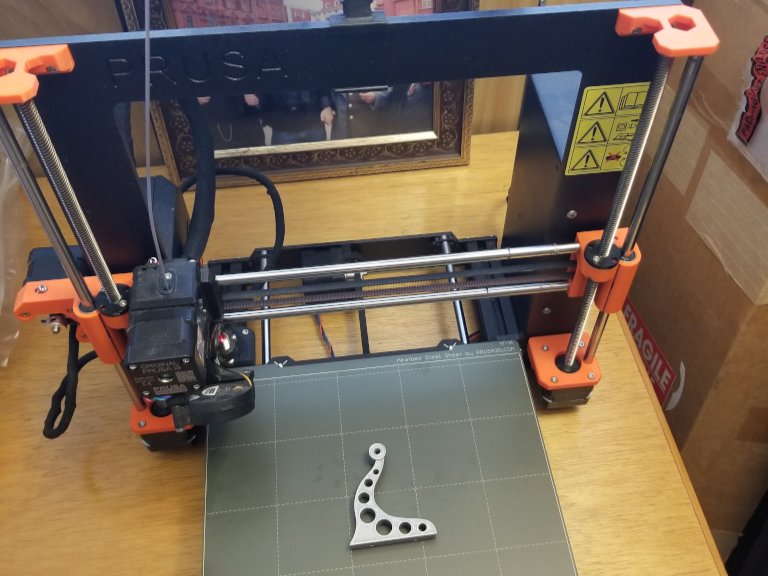 There’s tremendous interest in small-scale fabrication and manufacturing these days. The topic is constantly covered in trade journals and the news. I think it’s the best time ever to be in tech and there is a bright future for anyone leaping into the “small-scale” sector.

Lots of techies understand the basic concepts. Say you want to make a bracket. Just buy a 3D printer, sit it on your desk, maybe whip out a quick CAD model on your notebook, push the button on the printer and poof… out comes a super ultra-cool physical part.

Yaaaahhh, well… technology is still complicated and nuanced complexity markedly affects expectations, from family members and friends, all the way up through organizations and the general public. I typically maybe just get a “that’s nice, what’s it good for?” response.

Like everything else, you have to know stuff to answer their question.

This new series aims to help you fearlessly step into small-scale fabrication and inspire you to help guide it into practicality. Here’s a hint: Curiosity, willingness to learn, Free/Open Source Software and a modest bit of cash will put you solidly in the game.

On a good note, challenges to making physical “things” has dropped steeply over the last few years.

Back in the mid-80s, I worked for Martin Marietta. The company wholeheartedly embraced then-new tools like CAD, CNC and stereo-lithography. Those processes and systems meant spending cubic money. I think the CO2 laser stereolithography machine cost a cool quarter-million dollars.

Traditional machined (metal, wood, plastic) parts required a football field-sized shop full of lathes, mills, drill presses, welding equipment, injection molding machines, on-site parts inventory and assembly areas. Small-scale fab, especially for individuals or small companies was done manually, tended to be super slow and usually expensive. The very well-off regular Joe DIYer might have a small lathe or Bridgeport mill, but definitely no CAD or a 3D printer, much less one on their desk. Funny, I never really thought stereolithography (as it was then) would take off.

Flash forward to a decade ago and we had the age of $10 microcontroller boards and the Maker Movement. DIYers and tech tinkerers began to solder modules together into projects, wrote programs and freely shared their knowledge on the Web. This all evolved into our current small-scale, desktop everything capabilities.

Today, we have a largely ubiquitous web on your notebook, the living room TV and the smartphone in your pocket. Modern supply chains provide anything from a dozen brass 1 inch-long #8 round head screws to a still fairly-advanced JeVois artificial intelligence machine vision camera to carbon-fiber printer filament, showing up at my door in a day or two. Parts from overseas take a little longer, of course.

My Prusa printer took about a month to arrive after I ordered it, although at the time (late 2020) they were so popular as to have a backlog and the fully-assembled machine had to travel (through U.S. Customs) from the Czech Republic to Florida. I printed the first part soon after opening the box.

Open Source to the Rescue

Free and Open Source Software has also profoundly affected our ability to find and digest information. It has significantly matured over the last decade and has progressed to the point that you can do absolutely anything that someone on a proprietary system, like Windows or a Mac can do. Much of the software that runs under Linux also have versions that run on the other platforms, too.

In my opinion, getting into small-scale fab and manufacturing comes down to nurturing a strong willingness to learn, try new things and apply yourself. The actual monetary cost isn’t too bad either.

Single-board computers (SBCs) like the Raspberry and Rock Pi run almost exclusively on Linux as does much of the Web. I run Linux on all my computers because it is rock-solid reliable and is free to download and use. The Prusa designs are also Open Source, so if you ever need to print spare parts, just download the files and you are good to go.

In my opinion, getting into small-scale fab and manufacturing comes down to nurturing a strong willingness to learn, try new things and apply yourself. The actual monetary cost isn’t too bad either, if you make informed, practical choices and look at the investment over a year or two.

We’ll cover all these factors and more, in this series.

Getting the Design out of My Head

Results are practical, so lets begin with a start-to-finish, real-world part example.

Say I want a new bracket for one of my steampunk desktop name plaques. It originally had a cylindrical base with a short piece of copper tubing, topped by a cross-support bracket. Here’s a close-up: 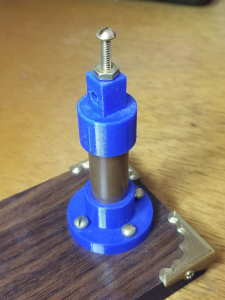 I envision simplifying the design into a single piece, that retains the steampunk aesthetic and looks awesome. Changing the design makes it easier to produce, supporting sales of the plaques. Here’s a quick sketch: 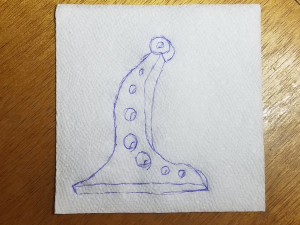 With the part drawn on a napkin, how do we now get it to bolt up to the plaque? Let’s expand the earlier process with a little more detail.

First, we’ll need a notebook computer. Mine is a Dell Inspiron i7 touch-screen model that costs about $1,200 at Best Buy. I installed Xubuntu Linux to replace Windows and use FreeCad for modeling parts. Xubuntu is a version of the very commonly used Ubuntu Linux.

FreeCad is a freely available, professional-level computer-aided design (CAD) program that uses primitive objects like cubes, cylinders and spheres to build three-dimensional mechanical models. You construct things by adding and subtracting the basic shapes to the 3D model. FreeCad has a bunch of functions in “workbenches” that let you manipulate the shapes and get your design just right.

Although FreeCad has a moderate learning curve, there are plenty of how-to’s and video tutorials on the Web, to get you started. FreeCad is very responsive with 16 GB of RAM and a 500 GB SSD in the notebook. We’ll dig deeper into using FreeCad and Linux in future articles.

In my bracket example, the next step is to model the part. An inexpensive dial caliper makes collecting rough (proportional) part measurements easy. Those measurements were transformed into FreeCad, to make the model. CAD modeling allows easy measurement adjustment, as needed to refine the part. 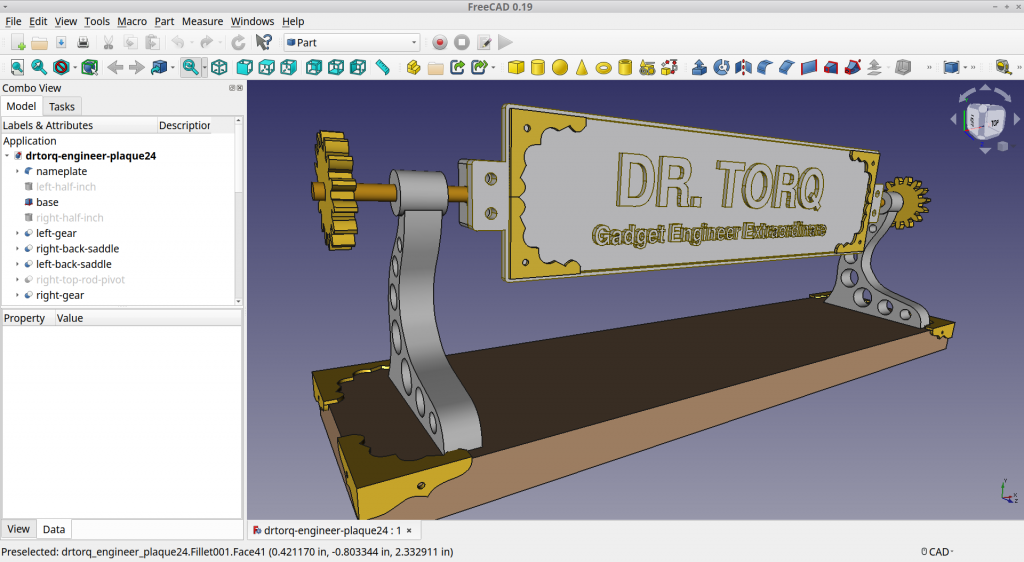 Once the model is built, an .OBJ file can be sent to a slicer program. The slicer cuts the CAD model into horizontal slices that are laid down as layers by the 3D printer. I use the Prusa Slicer and can adjust part orientation on the print bed, layer thickness, wall thickness, infill percentage, filament type, extrusion temperatures and so on. The Prusa Slicer is free to download and runs on various operating systems. 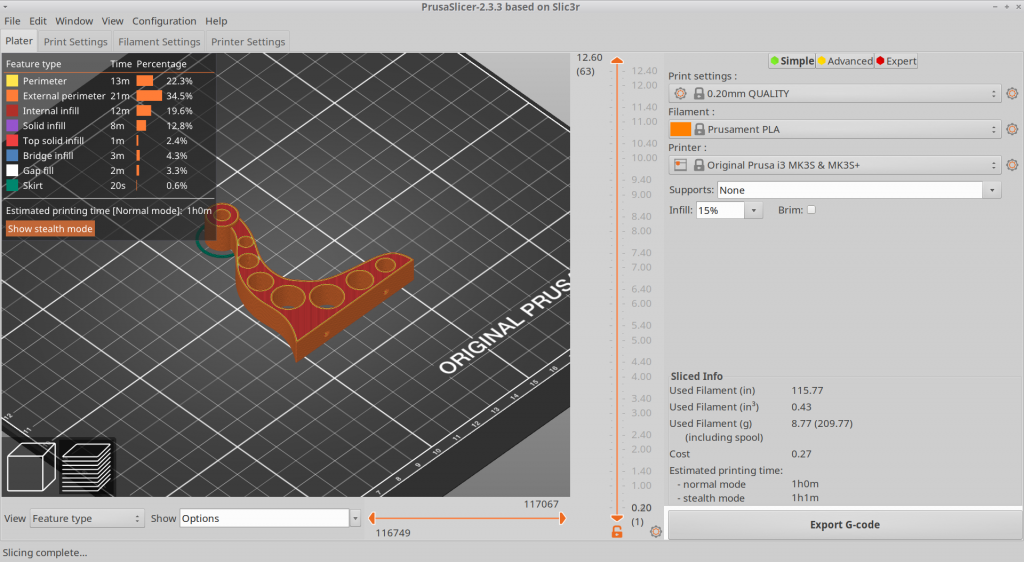 After the slicer does its magic, you need to output a G-Code file to an SD card. The SD card is then inserted into the 3D printer and the part is queued up for printing. I’m very happy with the Prusa MK3S machine and it is a top-of-the-line desktop-sized printer. It has practical built-in features like automatic bed leveling, an all-metal extruder, a heated bed and power outage restart.

A build-it-yourself version is available for about $750 plus shipping. The fully-assembled and tested version goes for about $1,100 plus shipping. I chose the fully assembled model because I wanted to print parts immediately and already know how to put things together. If you really want to understand the details of how it works, get the kit and put it together yourself. Some of my friends at Lockheed-Martin, formally Martin Marietta, use Prusa printers to make parts.

Many of my parts use PLA filament because it turns out very clean parts that are easy to print. PETG filament is more heat tolerant (I live in Florida) and a bit more flexible than PLA, although it does absorb moisture from the air, so you have to keep it dry with desiccant packs in plastic bags.

I also use TPU filament for highly flexible parts. It works great for gaskets, o-rings, flexible hinges, etc. TPU really absorbs moisture, so when it’s not on the printer, it is in the plastic bags. 1 kg. spools of these filaments each cost in the mid-20 dollar range.

Once the right filament is installed on the Prusa, matching the type I assigned in the slicer program, the button is finally pushed to start the print. The printer will do its thing and after a while, a new part can be removed from the printer. Here’s the finished part. 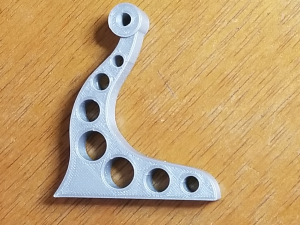 Spend a Little Coin, Make It Reliable, Get Peace of Mind

The rounded up cost of about $2,500 (including normal incidentals, taxes, shipping and so on) for this basic small-scale manufacturing setup is pretty reasonable, in my opinion.

When learning any new technology, it makes sense to use reliable, proven tools to minimize fiddling around with setups, calibration and underoptimized processes. The Dell and Prusa are solid, consistently performing machines. You can focus on learning to effectively use the FreeCad modeler and ship the files right through the Prusa slicer without a fuss.

I see the Prusa as a good investment because its precision and reliability are well known and it literally started printing one hour after I opened the box. It just works and after over a year of printing, I’ve had very few failed prints and no maintenance problems. Firmware and slicer program updates are frequent and keep enhancing the printer capabilities. I expect it to easily turn out new parts for the next few years.

We’ve looked at a basic 3D printer setup for small-scale manufacturing and gone through an example of how you make a part. The techniques are similar for CNC machining, laser cutting and other automated processes, although obviously, you would use different machines.

If you already have a nice notebook, just download FreeCad and start watching tutorials on how to use it. Instructables, YouTube and other Maker-type sites have plenty of helpful information.

Jump right in and start designing some parts, even if you don’t have a 3D printer yet. You could always take your new part model to a local Maker space and user their printers. Access to all the resources to learn small-scale fabrication are exceedingly low. Individuals just need to make the commitment to learn and put in the effort.

It is the greatest time ever in history to be a techie, engineer or inventor.

And, it’s something that’s fun!

Rob "drtorq" Reilly is an independent consultant, writer, and speaker specializing in Linux/OSS, physical computing, hardware hacking, the tech media, and the DIY/Maker movement. He provides a variety of engineering, business and special project services to individual clients and companies....
Read more from drtorq
SHARE THIS STORY
RELATED STORIES
Couchbase’s Managed Database Services: Computing at the Edge 4 Supply Chain Security Threats and How to Handle Them Edge Computing vs. Cloud Computing How New Sony AI Chip Turns Video into Real-Time Retail Data Performance Measured: How Good Is Your WebAssembly?
TNS owner Insight Partners is an investor in: Torq.
SHARE THIS STORY
RELATED STORIES
What Is Edge Computing? 7 Edge Computing Uses You Should Know Livin’ Kubernetes on the (Immutable) Edge with Kairos Project CES 2023: Robots, Astronauts, Schwarzenegger and Flying Cars Pinterest: Turbocharge Android Video with These Simple Steps
THE NEW STACK UPDATE A newsletter digest of the week’s most important stories & analyses.
The New stack does not sell your information or share it with unaffiliated third parties. By continuing, you agree to our Terms of Use and Privacy Policy.