Among the things to look forward to at KubeCon North America: hand pies, Coney dogs, ham sandwiches and maybe even a “carbo bomb” at Mom’s Spaghetti.
Sep 24th, 2022 5:00am by Michelle Gienow 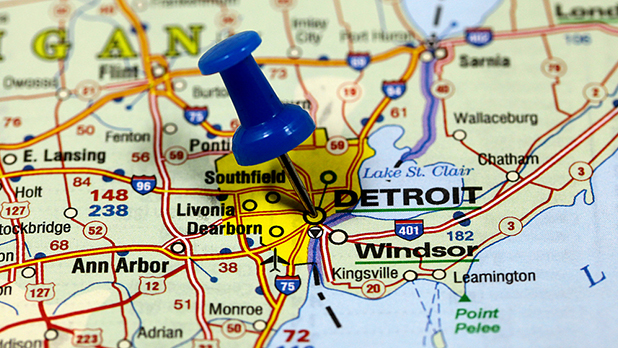 Featured image by Shutterstock.
TNS Annual Reader Survey
We need your input! Take 5 minutes to chime in and help guide our coverage.
Begin the survey
In our monthly “Snack Stack” column Michelle Gienow delves into the intersection between software culture and foodie culture, with histories and oddities, recommendations, recipes and other goodies. Here she takes the first of two looks ahead to KubeCon+CloudNativeCon North America, and the food culture of its host city, Detroit.

No matter what you call it, I’m genuinely excited to be heading to Detroit for my first-ever in-person KubeCon experience next month. I’m also an intrepid eater, so here’s the research I’m compiling about only-in-Detroit eating opportunities I want to be sure to enjoy on my first visit to the city.

The number one thing I’m looking forward to feeding into my face while in Detroit: hand pies.

The rest of Michigan refers to these flaky, savory turnovers as “pasties” (pronounced PAH-stees) and typically they are filled with meat, potatoes and onions then wrapped in a buttery crust for a one-handed yet satisfying meal.

They are very much A Michigan Thing, arising from Cornish settlers who migrated to the Upper Peninsula in the 1800s to work in the iron and copper mines and needed a one-handed yet satisfying meal for their 12-hour shifts underground. History holds that the miners reheated their pasties on mining shovels held over their headlamp candles, but today you can find these traditional meaty treats everywhere from gas stations to gourmet restaurants.

In Detroit, though, pasties are called “hand pies” and come in both sweet and savory varieties. Because I am a freak for great pie, upon arrival in Motor City my plan is to head directly from the airport to Sister Pie. Named one of the nation’s best bakeries by publications like Thrillist and Bon Appétit, Sister Pie’s famously flaky crusts are freshly made by hand each day and use locally sourced ingredients to showcase Michigan’s famed agricultural bounty.

Closer to KubeCon, though, I’ll also be looking to check out Walter Pat’s hand pies. A “seasonally-driven small-batch black woman-owned bakery” Walter Pat’s pasties are a delicious mash-up of Midwestern tradition and Southern influences — just like the city of Detroit itself, when you think about it.

Coffee Down Under is a quick two-block walk from the convention center and offers Walter Pat’s buttery pastry wares along with some of the city’s best coffee.

Definitely gotta get some dogs while in Detroit. It surprised me to learn from proud Detroit-native friends that, contrary to popular belief, Coney Island hot dogs (called “Coney dogs” or just “Coneys”) did not originate in New York.

As one story goes, Greek immigrants passing through New York on their way to the Midwest appropriated the Coney Island name for their upgrade on the basic naked dog in a bun popularized by Nathan’s in Coney Island.

A Coney dog is truly next level: an all-beef frankfurter in natural casing, nestled in a soft, steamed bun and topped with fine-ground meat chili — never beans! — diced white onions, and yellow mustard. (Interestingly, in some parts of New York, Coney dogs are called “Michigans” ¯\_(ツ)_/¯).

Coney dog ground zero is just four blocks away from KubeCon’s Darlington Center digs. Two side-by-side hotdog joints, American Coney Island and Lafayette Coney Island, have been dueling it out for nearly a century, each claiming to serve the best Coney dog in Detroit.

In 1917, Gust Keros, a Greek immigrant, opened American Coney Island on West Lafayette Street in downtown Detroit. In 1924, his brother William Keros opened Lafayette Coney Island when space opened up next door. (Things may have been tense at Thanksgiving that year). The businesses have each operated continuously in the same locations ever since, and Detroiters can be passionate about which has the better Coney.

My friends tell me American serves natural-casing made-in-Michigan beef dogs and their homemade chili is spicier, while Lafayette serves pork dogs with sweeter Valencia onions. Either way, when ordering you wanna ask for one up with everything.

All things considered, I’m going to try American Coney Island because it’s still family owned and it’s open 24/7 for that post-sponsor-party wee hours snack. Gotta plan ahead for these things.

You can get a ham sandwich just about anywhere, but ham sandwich joints are very much a Detroit thing. They are a relic of Detroit’s Motor City heyday, a working man’s lunch counter where blue-collar folks could grab a quick inexpensive bite before clocking back in at the auto factory.

Detroit ham shops also (usually) offer cheap breakfast and bean or split pea soup, but the sandwiches are the star. Whole hams are house-baked (no processed ham roll here), then sliced to order and piled high on a pillowy roll along with a slice of Swiss cheese and a smidge of yellow mustard.

Ham sandwich joints are all over the Detroit area and the names are bold: Johnny Ham King. Ham Palace. Personally, I’m hoping to squeeze in a Lyft ride to Mike’s Famous Ham Place, offering “off-the-bone goodness since 1974.”

Mike’s dozen-seat lunch counter feels like it’s from another era and the menu offers exactly four items. Everything except for the coffee has freshly carved ham in it, and it’s damn good ham. Dark-roasted caramel exterior, thickly sliced and heaped onto a soft poppyseed bun with pickle chips on the side and, adorably, an extra ham slice cap on top.

OK so you can eat spaghetti in just about any city on Earth, but only in Detroit can you eat it at native son and superstar rapper Eminem’s own restaurant, named for that famous line in his song “Lose Yourself.”

Mom’s Spaghetti first appeared as a Detroit pop-up shop in 2017 before becoming a fixture at Eminem’s festival performances since then. The first permanent location for Mom’s Spaghetti is basically a walk-up window carryout near Comerica Park baseball stadium, exactly one mile — or about a 20-minute walk — from KubeCon’s event site, Huntington Place.

According to acquaintances living in the 313, Mom’s Spaghetti seems to be mainly a tourist attraction, i.e. locals don’t really eat there. Maybe the reason is that the shop can only sling take-out pasta pronto because the noodles are pre-cooked, then fried up quickly with sauce. “It’s basically like spaghetti you’d make at home from a jar and it probably tastes best if you’re drunk,” one friend reports.

They also admitted that the S’Getti Sandwich ($11) — a pile of tomato-oozing pasta barely contained between two pieces of buttery white bread — is “a weirdly compelling carb-bomb.” Personally speaking, I’m entertained that Mom’s Spaghetti exists and I’m also an “8 Mile” fan, but it’s not likely I’ll have time to make the trip uptown for refried noodles. I’ll be too busy eating my hoarded hand pies.

SHARE THIS STORY
RELATED STORIES
Case Study: How Dell Technologies Is Building a DevRel Team Engineering Leaders: Switch to Wartime Management Now How and Why to Respond to Incidents the Right Way New Book Identifies 26 Lines of Code that Changed the World eBay: Betting on Open Source Is Great for Your Business
TNS owner Insight Partners is an investor in: Island, Famous.
SHARE THIS STORY
RELATED STORIES
Building an Internal Developer Platform Isn't Just about Tools How Security Champions Can Change Your Culture Slack: How Smart Companies Make the Most of Their Internships Low-Code Tools Improve Devs' Work-Life Balance, Survey Finds Entrepreneurship for Engineers: Painkiller or Vitamin?
THE NEW STACK UPDATE A newsletter digest of the week’s most important stories & analyses.
The New stack does not sell your information or share it with unaffiliated third parties. By continuing, you agree to our Terms of Use and Privacy Policy.