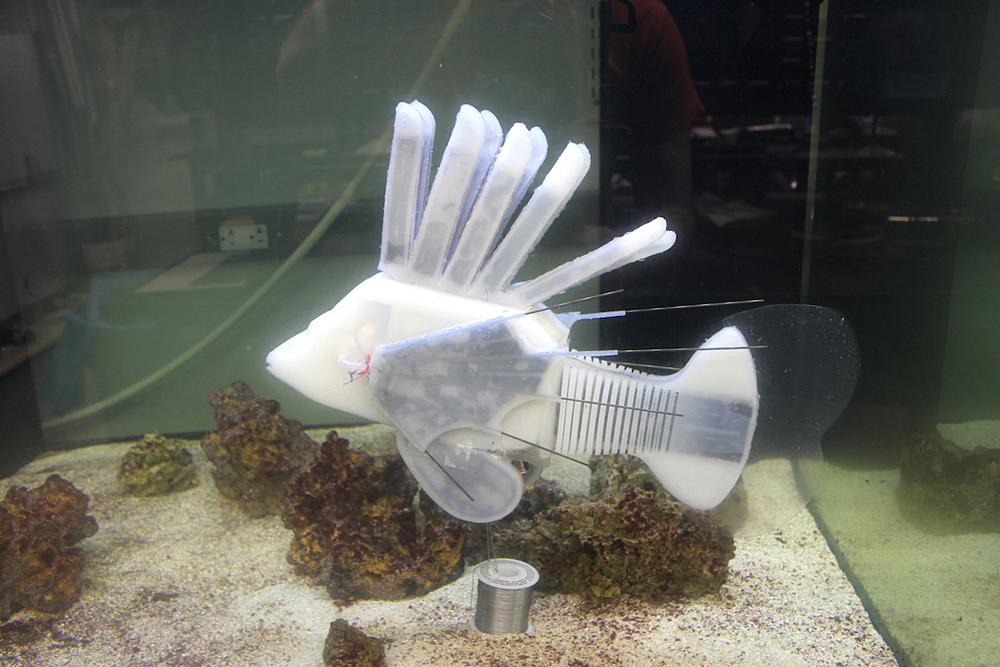 When we think of robots, the image that’s usually conjured up is a machine made out of rigid components. But that idea may soon change, as experts are starting to develop a wide range of flexible and adaptable soft robots, which are typically made out of pliable materials, and often attempt to emulate biological organisms in terms of their functionality, whether it’s in terms of how they move, how they sense things, and how they’re powered. In contrast to their metallic brethren, soft robots would do well in a variety of challenging situations such as sorting objects using touch, performing surgery, and even exploring extraterrestrial terrain.

Nevertheless, one of the big limitations even with soft robots is how they might be powered. Depending on their design and application, robots can require quite a bit of energy to run, and that means unwieldy and heavy batteries, or even tethering it down with power cables that would further limit the robot’s mobility.

But what if we could look to nature once again to find some biologically inspired solutions? That’s what a team of researchers from Cornell University and the University of Pennsylvania are proposing in this prototype of a soft robotic fish that uses synthetic “robot blood” that acts as both a transmitter of hydraulic forces to move its artificial “muscles”, and as a source of electricity as it’s pumped around its artificial circulatory system. Here’s a quick clip of it floating in water:

Go with the Flow

Granted, this prototype isn’t particularly lightning fast as it only moves about 1.5 body lengths per minute, but this clever workaround cuts down on the overall weight of the robot, while also providing a source of power. As the team details in their paper, recently published in Nature, their design for the soft robotic fish is based on the way redox flow batteries (RFBs) function, which exploit the energy that results from two dissolved chemicals reacting with each other, via a continuous exchange of ions over a membrane. In this case, the robot’s synthetic vascular system merges the functions of hydraulic force transmission, actuation and energy storage into one relatively streamlined and integrated design, enabling it to run untethered for up to an impressive 36 hours.

Enveloped with custom-formed silicon casing, the team’s robot was modeled after the lionfish, which sports distinctive fins on its back and underside for both protection and as a way to signal and communicate with other fish. While the fins on the back of the soft robotic version don’t move, here they are used for storing the battery and the hybrid electrochemical-and-hydraulic “robot blood.” The robot’s interior is equipped with pumps that help to move those fluids around. In addition, there are embedded microcontrollers that wirelessly direct the flow of the hydraulic solution inside the fish’s body, thus creating locomotion by filling and draining different sections of its interior so that the fins and tail move in a way that’s similar to the real thing. 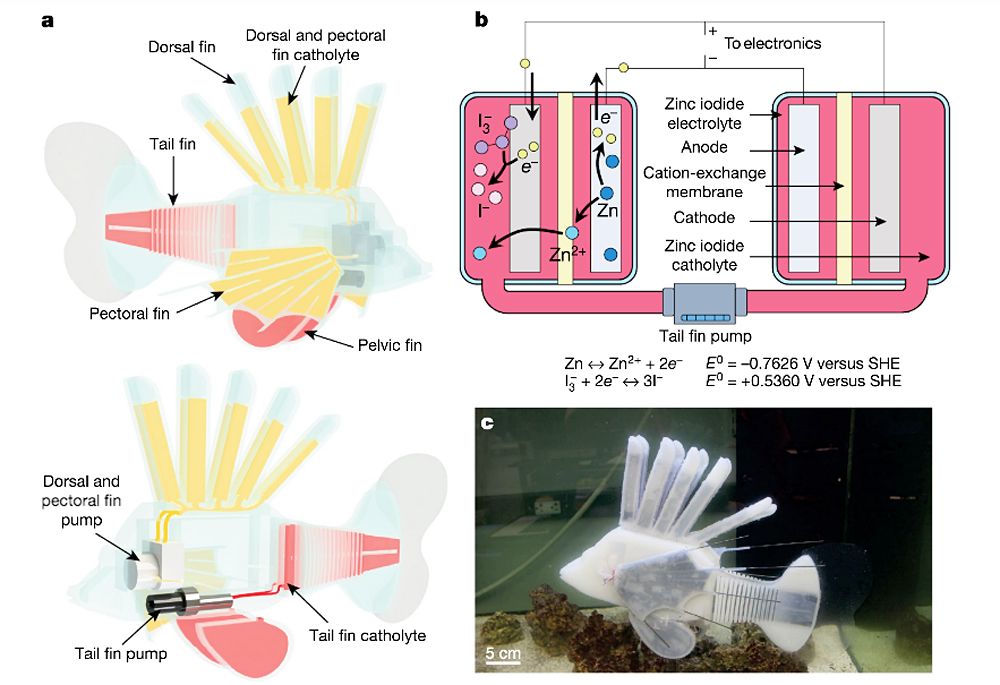 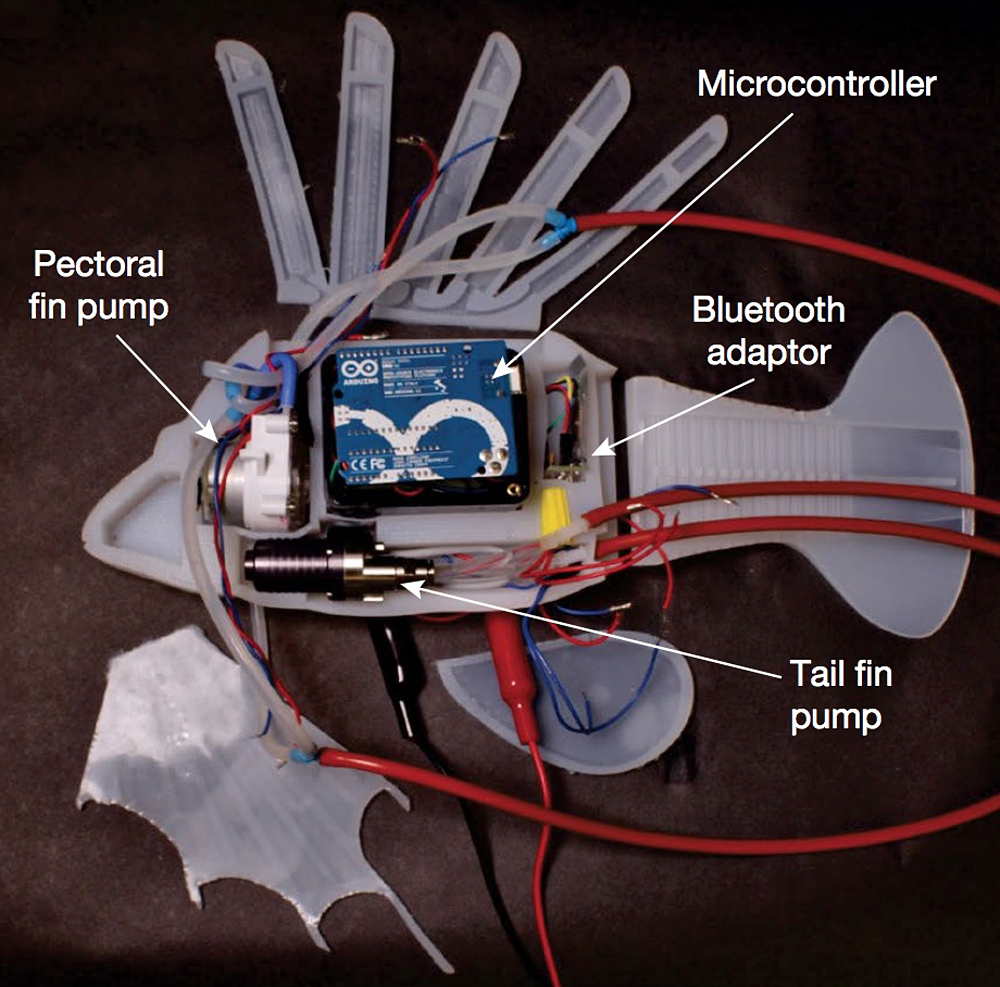 But the secret sauce (so to speak) is in the robot blood, which is actually a liquid triiodide cathode. This liquid flows past zinc cells that are immersed in an electrolyte. As the zinc gradually oxidizes, electrons and soluble zinc ions are discharged, thus providing the electricity needed (approximately 322 watt-hours per liter) to power the fish-bot’s pumps and various onboard electronics. The zinc ions flow through the electrolyte and membrane, effectively balancing the charge, so that it maintains a constant power density during the robot’s operation. The chemicals for the prototype were chosen as they are particularly low in viscosity but quite energy-dense, compared to the typical make-up of a lithium-ion battery.

As the team notes, their design for this robot fish and its “robot blood” is a step up from regular flow batteries: “Whereas conventional RFB designs are made from rigid materials, our synthetic vascular system contains flexible electrodes and a cation-exchange membrane encased in a soft silicone skin, allowing it to bend … and dilate to accommodate fin movement.”

Of course, there are improvements to be made: as the team points out, the design of the fish’s interior needs to be refined, since some of the chemical solution is inadvertently absorbed by the silicon casing, effectively reducing battery capacity over time. The fish was also too buoyant — resulting in the team having to tie a weight to the robot. In the future, the team speculates that more battery fluid or extra ballast could be added instead. Needless to say, despite these shortcomings, the underlying idea is a valuable one, as using a multifunctional liquid that acts both as a source of movement and power would mean that future robots will be more energy-efficient and autonomous — whether they swim, slither, walk or fly.

SHARE THIS STORY
RELATED STORIES
What Is Edge Computing? Top Edge Computing Companies to Know 7 Edge Computing Uses You Should Know 9 Supply Chain Security Best Practices How New Sony AI Chip Turns Video into Real-Time Retail Data
SHARE THIS STORY
RELATED STORIES
Livin’ Kubernetes on the (Immutable) Edge with Kairos Project Making It Easier to Build Apps with Time Series Data What Is Multi-Access Edge Computing? Why the Edge for Applications Is a Trend Heading into 2023 Spotify: Bigger the Codebase, the More Challenging the Migration
THE NEW STACK UPDATE A newsletter digest of the week’s most important stories & analyses.
The New stack does not sell your information or share it with unaffiliated third parties. By continuing, you agree to our Terms of Use and Privacy Policy.