Solo.io is adding a layer of observability that it says will extend across multiple clusters in a single interface when the beta version of Gloo Mesh is released in the second quarter.
Mar 24th, 2021 3:49pm by B. Cameron Gain 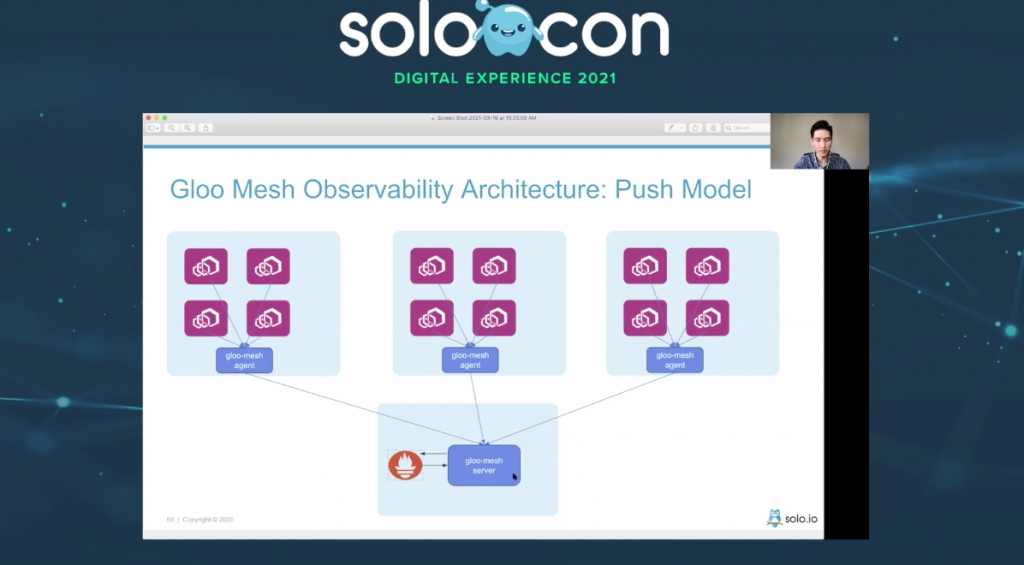 Solo.io’s software for managing multiple Istio service meshes is getting a single unified interface that the company claims can look over across multiple clusters.

The “single-pane-of-glass view” multicluster observability with Gloo Mesh serves as an additional layer on top of the Prometheus monitoring tool and Istio. Gloo Mesh’s observability functionality collects metrics, logging and traces for microservices running on multiple clusters across a host of different environments. On a network level, it was designed to offer a more unified view of observability data across hundreds of different microservices, for faster remediation to fix errors and to help to improve network performance.

Previously, many DevOps teams struggled with “silos of observability,” Erik Frieberg, solo.io’s chief marketing officer, told The New Stack. “What we’ve done is brought all observability for multiclusters together in order to see all of the interactions,” Frieberg said.

#SoloCon2021 Keynote: Global Field CTO Christian Posta: In highly distributed microservices environments, it is more vital than ever to “observe and understand” the complexity between the services. @christianposta @soloio_inc @thenewstack #Gloo pic.twitter.com/bTX1NELT6e

This single-view observability is seen as a way to address the increasing complexity associated with microservices deployments across multiple clusters and different environments.

“We need to understand what is actually happening between these applications,”  Global Field Chief Technology Officer Christian Posta said during a keynote at the company’s virtual user conference held this week. “When we go to microservices, we’ve moved some of the complexity between the services, and we need to observe and understand what is happening, especially when things go wrong, so that we can correct them.”

Harvey Xia https://t.co/VKAxWqBGCh, described during his keynote how Gloo Mesh can be used to collect telemetry and logging data at scale with a service mesh across multiple clusters. #SoloCon2021 #Istio #Gloo Mesh @soloio_inc #sponsored @thenewstack pic.twitter.com/03D67we823

Harvey Xia, a backend data engineer for solo.io, described in his talk details about how Gloo Mesh can be used for collecting telemetry and logging data across multiple clusters. Gloo Mesh integrates Istio in order to configure the fleet of Envoy proxies to treat the Gloo Mesh agent as a sync for metrics and access logs. When an Envoy proxy emits a metric, it is sent to the Gloo Mesh agent, which in turn, forwards the data to the Gloo Mesh server. “This process aggregates all of the observability data into a single place,” Xia said.

Got @grafana or @Datadog? https://t.co/VKAxWqBGCh‘s Harvey Xia: A user with Datadog or Grafana could treat Gloo Mesh as a source of truth for aggregated metrics and plug that right into their UI.” #SoloCon2021 #Istio #Gloo Mesh @soloio_inc #sponsored @thenewstack pic.twitter.com/LxZkQ5zasj

Xia also described how Gloo Mesh’s observability capability can integrate other tools and interfaces, such as the wildly popular Grafana for visualization, or the OpenTelemetry framework for collecting operational metrics. Metrics are aggregated into a single location to allow for system-wide multicluster queries, and for integrating the aggregated data source into a user interface (UI).

“So, if a user already has a sophisticated [Prometheus federation setup] and they want to use that they can just plug it in as a source and then leverage Gloo Mesh for its UI,” Xia said. “Alternatively, if a user already has a UI that they’re comfortable with, like Datadog or Grafana, they could treat Gloo mesh as a source of truth for aggregated metrics and plug that right into their UI.”