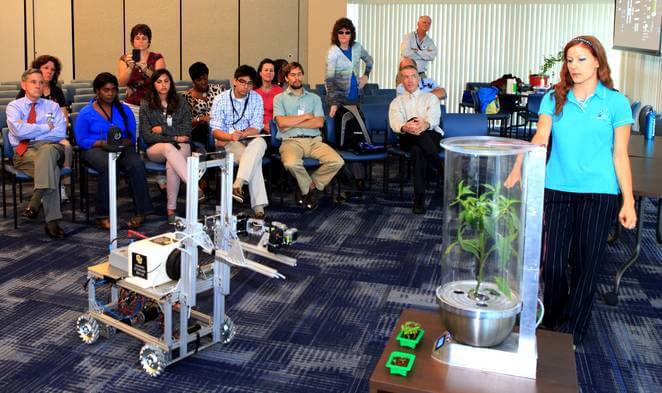 We are still quite a ways from a manned mission to Mars, but from the looks of it, things are progressing fast. Flowing water has been discovered on the Red Planet, and NASA will soon be testing its powerful Space Launch System rocket, capable of propelling humans to distant planets like Mars. But what, pray tell, will these human explorers eat once they’ve reached these faraway and inhospitable planets?

Fresh strawberries, tomatoes, peppers, herbs, and green leafy veggies like kale and basil, apparently. At least, that’s what University of Colorado Boulder aerospace engineering graduate student and co-founder of Autoponics Heather Hava is proposing with SmartPot, or SPOT for short, a robotic space gardener that can effortlessly grow a variety of fresh produce within its small, climate-controlled chamber.

SPOT, which was the recent winner of the “Eat It!” category of the $15,000 Lemelson-MIT Prize, is a smart-growth device that can grow fresh fruit and veggies hydroponically, using a nutrient-infused liquid as a growth substrate instead of soil.

The nutrient-enriched water passes through this system, where it feeds the plants’ roots to encourage growth. The remaining water is stored in a reservoir, where it is then automatically cycled through the system again. There are sensors that keep tabs on all stages of cultivation, monitoring water temperature, pH levels and humidity. When nutrient water levels become low, astronauts are alerted to replace the water, and also when to harvest their crops to eat.

It’s all controlled by AgQ, an application developed by Hava as an “[artificially intelligent] platform for distributed urban farming,” permitting real-time tracking, control and interaction from any location. The app continuously gathers data to give users an accurate picture of progress, and can even be set on “autopilot” to take the hassle out of manual cultivation, or customized to accommodate the needs of a particular crop. The app can learn independently, and is also connected to specially designed suits that astronauts can wear, capable of tracking the health of their nervous systems and using that data to predict possible stress triggers that may come up. 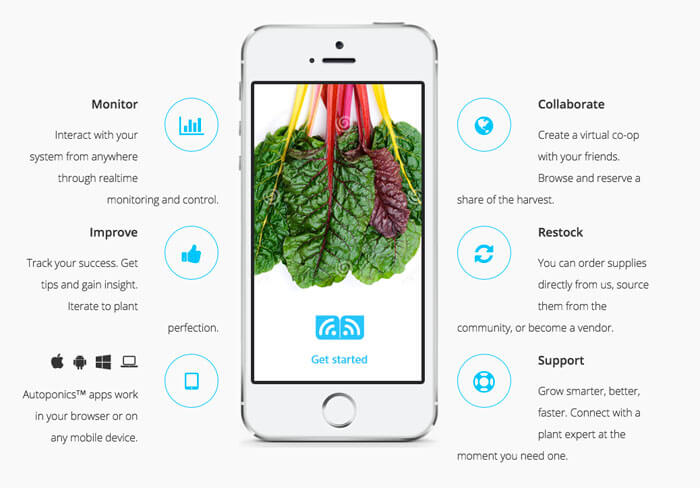 Having fresh produce in addition to the regular freeze-dried fare would certainly be a treat for astronauts traveling in outer space for extended periods of time. But besides the practical aspects of producing food to meet basic survival needs, Hava points out that there is a psychologically therapeutic effect of having real, living plants cultivated within the confines of spacecraft. She alludes to the theory of biophilia, literally translated as a “love of life,” or an instinctive, psychological attraction to all that is vital and living.

“What we want to do is to optimize the system to allow the human to interact with the plants so they enjoy it so that they get maximum psychological benefit,” explained Hava, in an introductory video. “We also want the plants to be in their environment so that they can see them, smell them and be around them. Who doesn’t love to pick a fresh strawberry and eat it fresh out of the pot?” 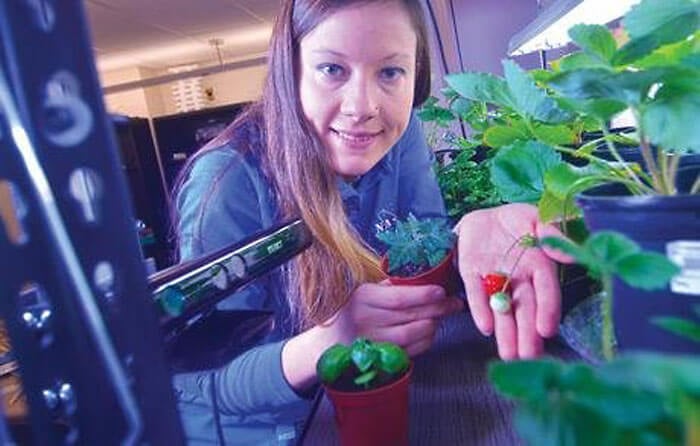 Hava, whose disciplinary focus is on bioastronautics or the study of how to support life in space, is interested in inventing new ways to produce food in the hostile environments found in outer space and on other planets. SPOT is just one of the projects she’s working on toward this end, as the self-proclaimed “space gardener” is not only developing space gardening robots but has also patented a geodesic dome structure to be used for sustainable horticulture, housing and emergency relief on Earth.

Hava will be testing prototypes of SPOT at a Utah space research colony that simulates the harsh environments of Mars on Earth. She is also collaborating with NASA to revamp ROGR (Remotely Operated Gardening Rover), a remote-controlled rover that will be used as a “robotic farmer” for SPOTs, allowing astronauts to maintain and harvest food crops via telepresence.

“My personal interest in this is seeing our human species basically going out and becoming a universal species, moving off our home planet and out into the universe,” Hava said. “This is the first step in allowing us to do that. So if we want to send humans to Mars or the Moon for an outpost, we need to be able to feed these astronauts.”