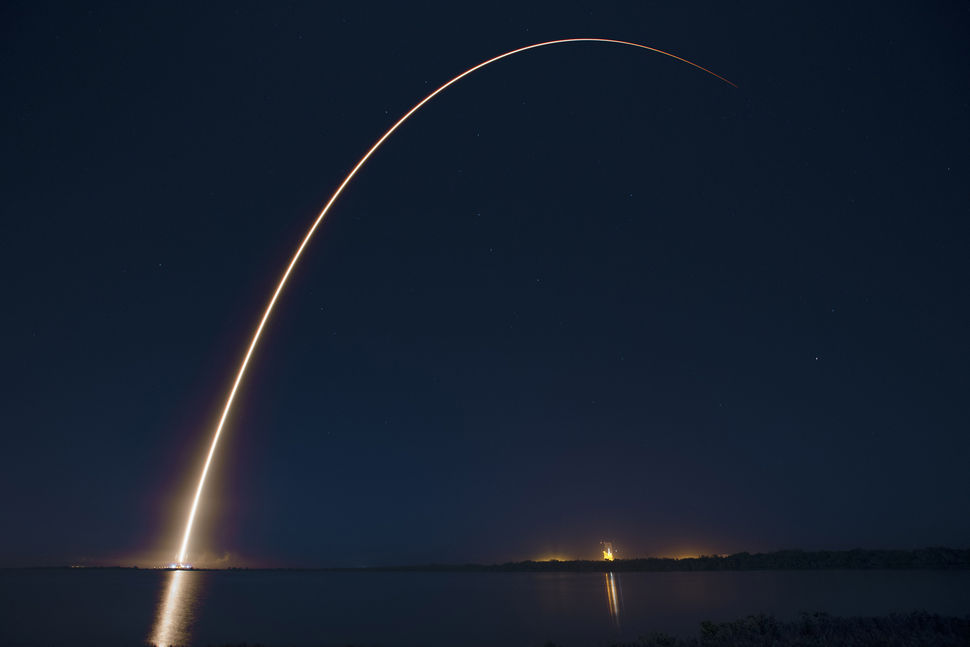 Sunday may see yet another new milestone for Elon Musk’s SpaceX — or something much more dramatic. After delivering another payload into outer space, the company’s reusable unmanned Falcon 9 rocket will return to earth, and attempt to land onto a small floating pad at sea.

Two previous attempts over the last year have ended with fiery crashes, followed by a successful landing on December 21st.

“If it can indeed land the rocket following this launch, that will show that last month’s success wasn’t just luck,” noted ExtremeTech.

“Close, but no cigar,” SpaceX posted on Twitter’s Vine service in January of 2015, adding the words “This time.” The post shared a spectacular video of their transport rocket’s crash, but the company then tried again in April.

During that second attempt, “The rocket spent a total of 10 seconds on the platform before tipping over and disintegrating,” wrote Jessica Orwig, a science reporter for Business Insider, calling it an improvement, since three months earlier “the rocket exploded as soon as it contacted the barge.”

But she described the attempts as “gutsy,” noting that re-landing a rocket so it can be re-used again is “a game-changing feat that would usher in a new era of cheap commercial spaceflight powered by reusable rockets.” On December 21, 2015, SpaceX successfully delivered 11 satellites into low-Earth orbit — and more importantly, successfully landed their first stage rocket on its return trip.

Tuesday SpaceX shared a video on YouTube titled “The Falcon has landed” which celebrates that successful landing. It shows engineers leaping in the air, hugging, cheering, and pumping their arms in the air. Its soundtrack? A song by Incubus called “Absolution Calling.”

Now almost exactly one year after that first crash, SpaceX is trying again. The mission? According to the SpaceX web page, they’re delivering an Earth-observation satellite for the National Oceanic and Atmospheric Administration, one of several satellites that precisely measures sea surface height, providing data for weather and climate forecasts.

“This is SpaceX’s third category of NASA award,” they report proudly, “with the company also holding awards to carry cargo to the space station and to start to prepare the Falcon 9 rocket and Dragon spacecraft to carry astronauts.”

SpaceX is quick to point out that 60 percent of their upcoming space transportation missions are for commercial customers, many of them communications satellites — but Sunday’s customer will be NASA.

SHARE THIS STORY
RELATED STORIES
How We Manage Incident Response at Honeycomb Snack Stack: Turning Winter Comfort Food up to 11 2022 in Review: AI, IT Armies, and Poems about Food Why Your Code Sucks: Common Excuses for Bad Programming How Will Working in Tech Change in 2023?
TNS owner Insight Partners is an investor in: The New Stack.
SHARE THIS STORY
RELATED STORIES
How to Get Started Filling 3.4 Million Cybersecurity Jobs A Brief DevOps History: The Road to CI/CD Tech Works: How Can We Break Our Obsession with Meetings? The Power and Ethical Dilemma of AI Image Generation Models Java's James Gosling on Fame, Freedom, Failure Modes and Fun
THE NEW STACK UPDATE A newsletter digest of the week’s most important stories & analyses.
The New stack does not sell your information or share it with unaffiliated third parties. By continuing, you agree to our Terms of Use and Privacy Policy.